At the showcase event in Redmond in the USA, Joe Belfiore has briefly demonstrated 'Windows 10' on phones, using a Lumia 1520, with updates to the Start screen, application list, settings, messaging experience, user input, and more. The key point, echoing the shared technical core announcement of Windows Phone 8, was the commonality of Windows across all devices. In this instance, the emphasis is on the consumer experience, exemplified by the arrival of numerous "Universal" applications that work across PC, tablet and smartphone (Office, Outlook, Calendar, People, Photos, Music, and Xbox, among others). 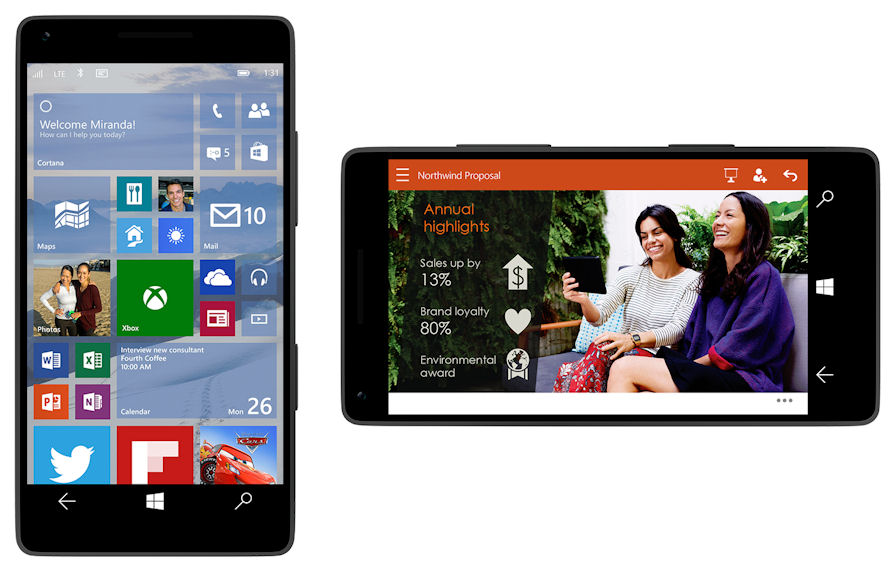 We'll have more commentary on what's coming below, later, and in a podcast in a day or so, plus in other news stories where relevant, but in brief, some of the highlights of the Windows 10 for phones reveal:

Joe made a big thing of the new range of Universal apps, i.e. a lot of the core applications for Windows 10 are the same for the desktop, tablet and smartphone. Quoted Universal applications, which will be updatable outside of firmware updates in the same was as we're used to for XBox Music, Calendar, etc., include:

Also announced was 'Project Spartan', a next-gen web browser coming to Windows 10 Insiders next month and phones 'a little after'. This browser includes:

Spartan, which is unlikely to ship with that name, is also a Universal app, to work on any device.

Also announced at the event were Xbox game streaming and social features, plus Windows Holographic, a 3D system based around augmented reality goggles.

The full video stream for the Windows 10 event is available here - it's well worth a watch. If you're short of time, slip Terry Myerson's intro and Satya Nadella's closing section - most of the meat is in the Joe Belfiore section and in the fun Holographic demo. And if you're even shorter of time, see the embedded promo video from Joe at the end of this story.

All in all, it was an impressive event, the speed at which Joe was forced to keep dipping into and out of new features was breathtaking, it would have been nice to have seen twice as long dedicated to this section, but in fairness the whole event was already well over the two hours, so....

Most of all, there was the promise, in a month or so's time, that any enthusiasts could, via the Insider programme, flash on a build of Windows 10 for phones onto their own devices. Watch this space, it's going to be quite exciting, even if (I suspect) the first builds aren't going to be recommended for use on daily-used phones.

Here's the promised video promo, which gives a good and short overview of what's new for the PC - and for the phone, by extension!

Filed: Home > News > Windows 10 for smartphones fleshed out and demonstrated