Launcher10 and Live Tiles on Android

One of the biggest reasons why users love Windows Phone and Windows 10 Mobile is the front end UI - the multi-size live tiles (most of which still work). And I was struck by the example below, put up on Twitter by Mike Latham, one of my followers there. There's plenty to see and comment on, plus I'll put in the relevant links below. Could making Android's app launcher look and feel like Windows 10 Mobile be a valid way forward? I give it a try anyway...

Here's the tweet that started me thinking. And Mike has - obviously - put a lot of effort into customising his Launcher10 install

@stevelitchfield hi there. For those windowsphone addictss amongst us who can't bear any circular icon cobblers, I can't more heartily recommend Launcher10 on android. The live tiles actually work and the customisability/functionality is better than my 950xl ever was. 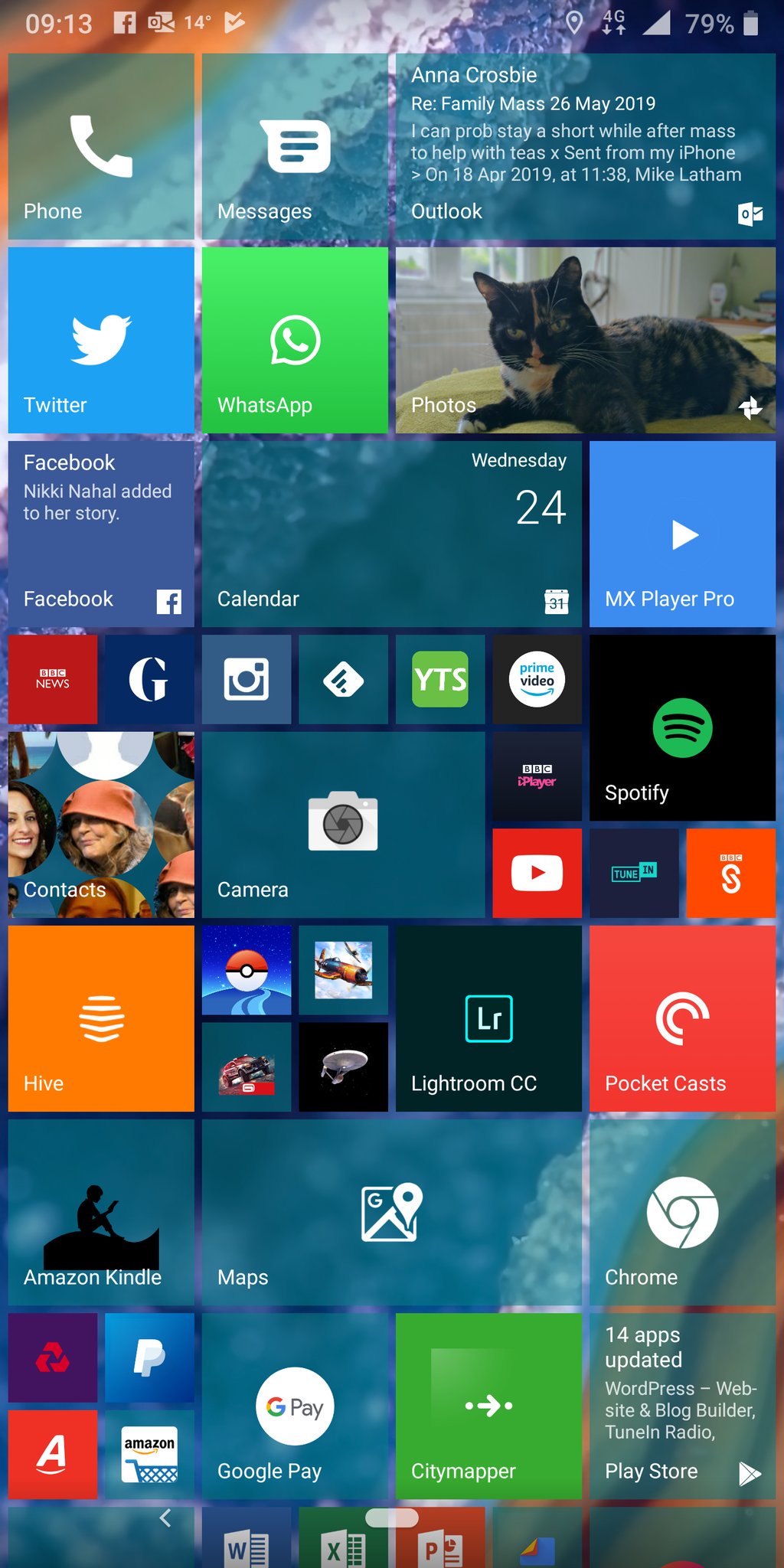 Very nice Mike. Apologies for taking up a lot of vertical space in this feature with his example, but in this case a picture may well be worth a thousand words.

You'll note that, even more so than under Windows 10 Mobile, many tiles don't shown information of any kind. It all depends on the application and how it's been implemented.

Still there's enough here for me to try Launcher10 for myself. It's installed in the usual way through the Play Store and then - in my case - can be made the phone's default launcher (when you use the home button or gesture) in Settings/Apps:

My layout is above, left. Not as sophisticated as Mike's layout, but I'm just trying the system on a test phone here, so I haven't got anywhere near as many applications installed. I was disappointed again by how few tiles had animation or information - note that Email here is different from Mike's Outlook, with the latter supporting proper live tile function. Photos is the clear highlight here, and note that you can make tiles as large or as small as you like (by tapping and holding to get the options, just as on Windows Phone, though in this case there are sliders to adjust height and width).

Rather touchingly, the 'All Apps' list from Windows phones is mimicked, above right, so picking an application that's not on the Start screen is also easy - you can even tap on a letter to get an alphabetic grid, to jump to a particular (other) letter. And long pressing on an application name gives the familar 'Pin to Start'!

Launcher10 has its own Preferences, shown here - with more options than on the original Windows phones, interestingly. Note that the live tiles (i.e. animations and information display) are a premium feature - though with a 14 day trial that I took advantage of in order to try the system out, here.

My takeaways then, after (admittedly only) a day with Launcher10:

There's also the Microsoft Launcher for Android, which I reviewed here. It surfaces many Microsoft apps and services more easily, though in an Android-ish way. Well worth a look, though like Launcher10 here, it's more of an 'add-on' and thus you can never rely on its resource usage on the phone.

Comments welcome - have you used Launcher10?