It's not often that we review applications that don't run on Windows Phone or Windows 10 Mobile, but Microsoft Launcher for Android is significant as it may well provide an easy-ish bridge between a Windows phone and Microsoft applications and services while moving the phone itself to Android. Microsoft Launcher has been covered here before in passing, but it hit the big 5.0 in the last week and it's time to assess it properly.

I should preface this illustrated review by saying that I've extensive knowledge of other Android 'launchers', so I'm weighing up the pros and cons below against the Pixel Launcher, Nova Launcher, Emotion UI, and so on.

At the end of the day, Microsoft Launcher is exactly what it sounds - it doesn't turn Android into Windows Phone, but it provides enough UI elements and aids enough Microsoft services and applications that you'll at least feel more at home if you're coming from (e.g.) a Lumia. 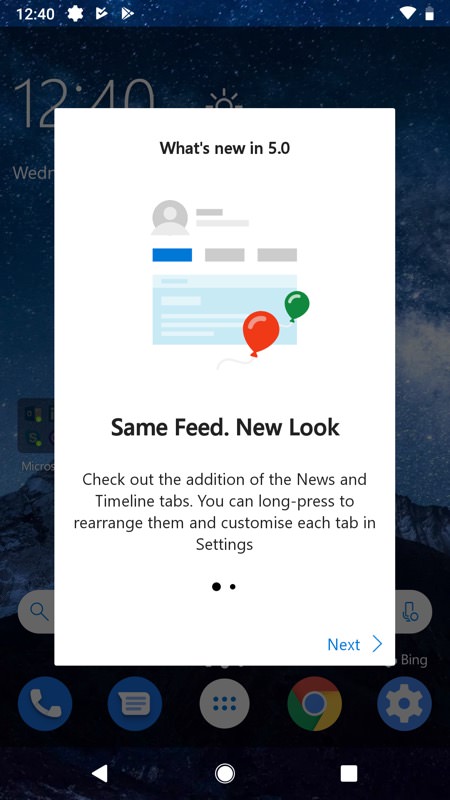 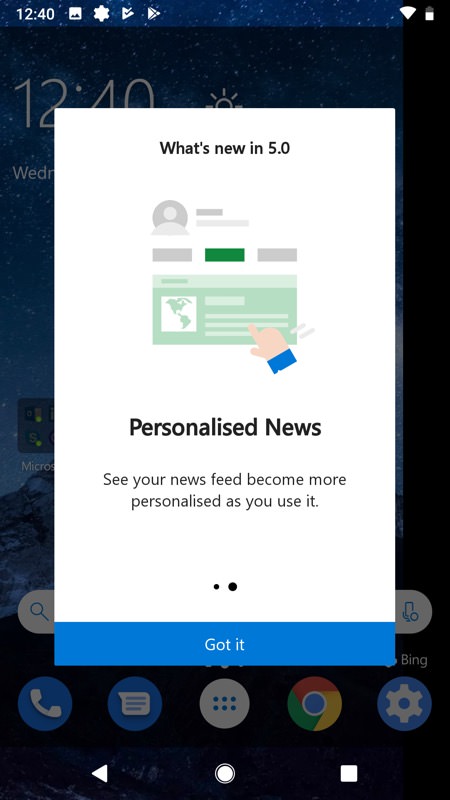 Launcher 5.0 adds an extra layer of customisation and compatibility with Windows 10 on the desktop/Surface/etc. As we'll see below. 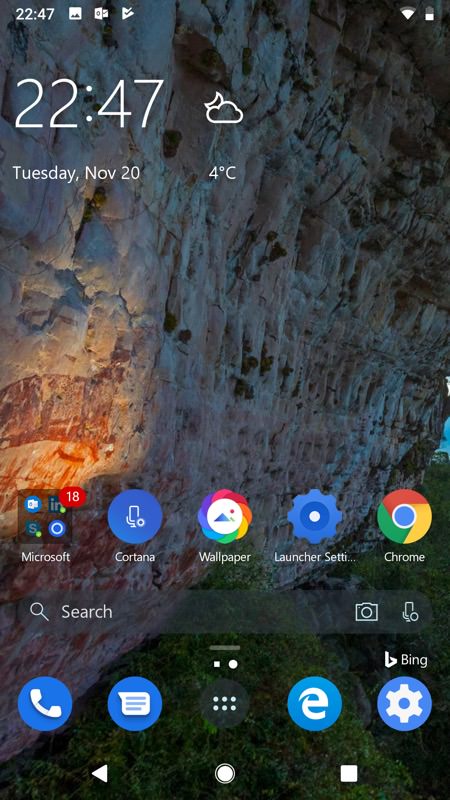 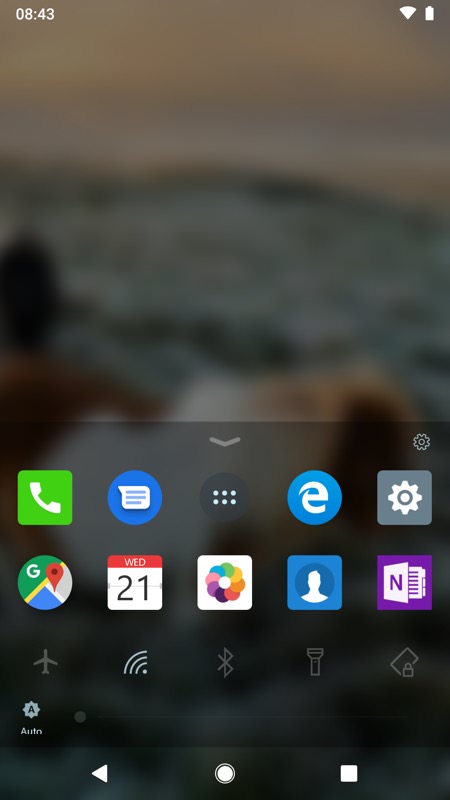 Your Launcher front end, a fairly traditional mix of weather/time summary, application shortcuts and folder, search box, and dock, with application tray. Nothing too remarkable, though the use of the Bing Spotlight images each day do help keep things fresh and attractive; (right) the dock can be swiped upwards to reveal a second row of shortcuts, plus more to system/device functions. This doubling up works pretty well. 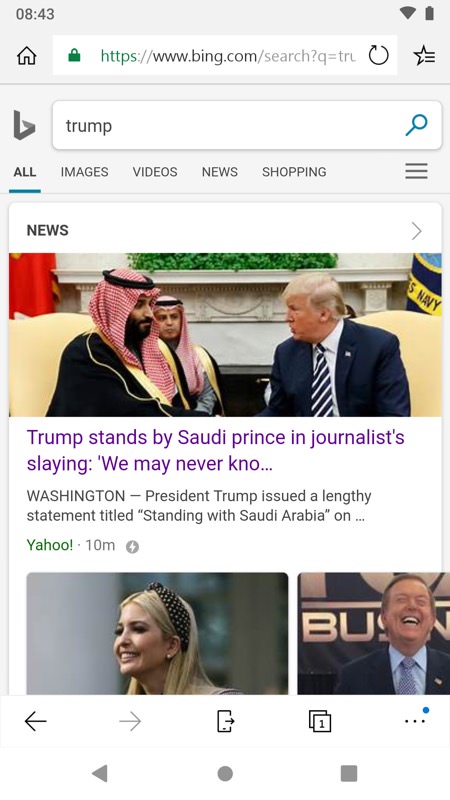 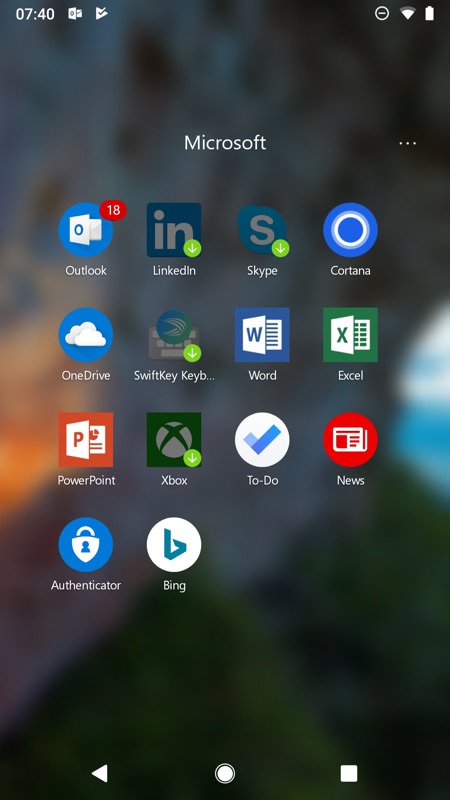 The search box brings up results from Bing, and in the Edge browser, as you'd expect. Perfectly fine too, many people prefer Bing to Google here; (right) The Microsoft folder kicks things off for you with most of Microsoft's applications and services. A green arrow denotes an app that isn't installed yet - tap it to download it in the Play Store. Of course, you can drag these shortcuts around and onto other homescreens or into other folders, as needed. 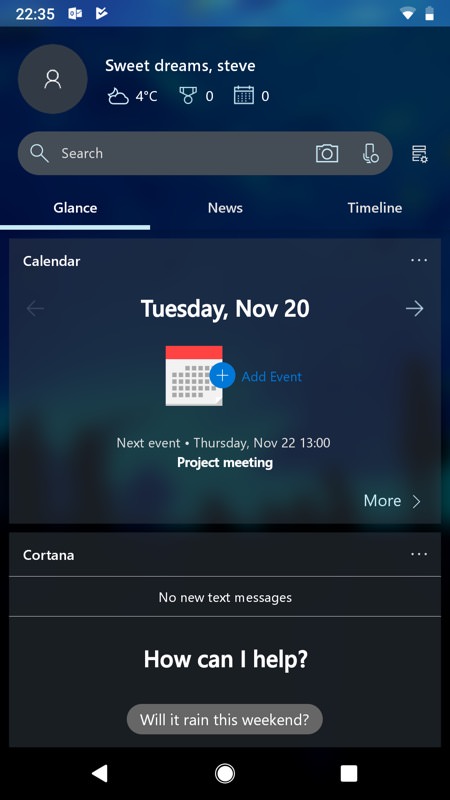 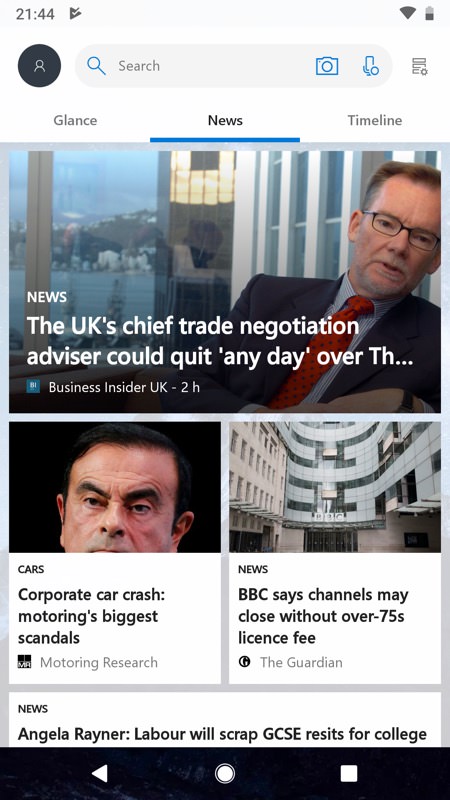 Off to the left of your main home screen is the core of Microsoft Launcher, you might say. You effectively get a three tabbed approach, with Glance showing you what's coming up in your life (across various apps and services), News bringing you your personalised news feed, and Timeline surfacing (see what I did there?) documents and pages that you've had open recently on your Surface laptop or similar. 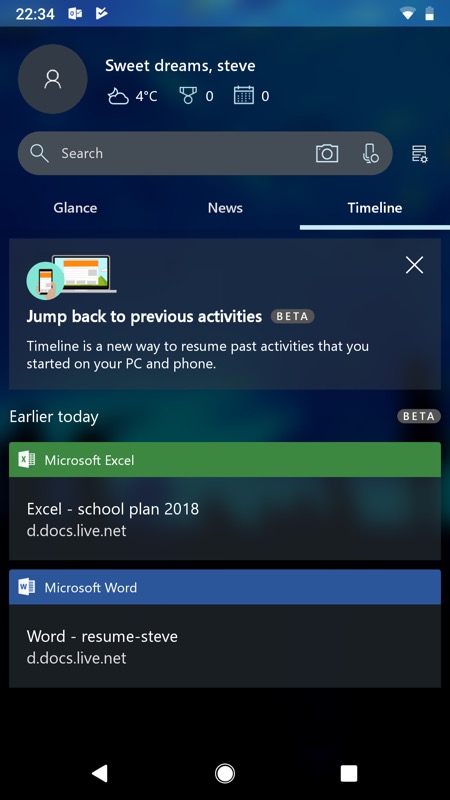 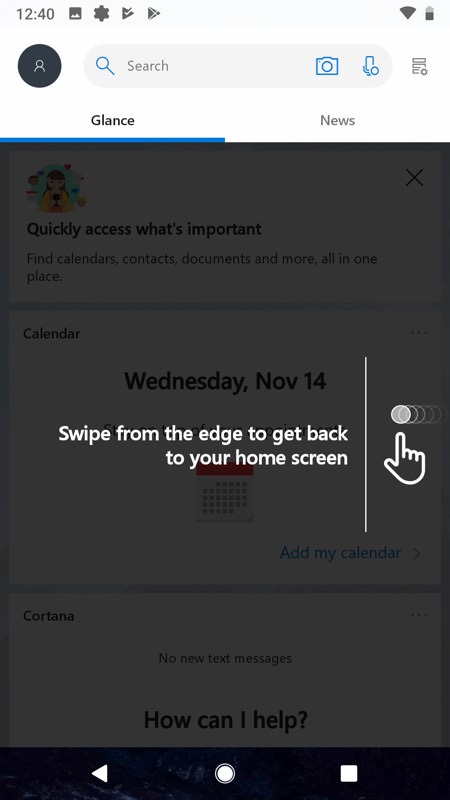 For example, here Timeline is highlighting Word and Excel documents I've had open recently on my Windows 10-powered Surface Go - just tap to open in the appropriate application on (in this case) the Android phone; (right) swiping back from the edge of the screen takes you back to the main home screen. 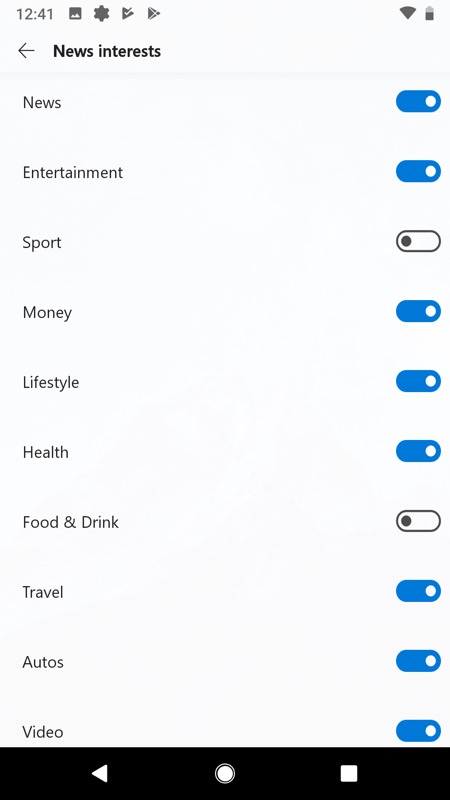 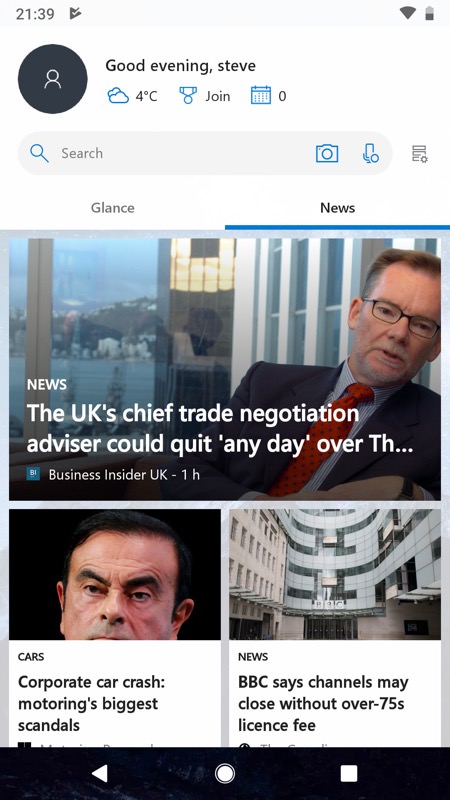 Some of the customisation options for your Microsoft news feed, note that the actual contents are different for each country and that you can't add your own feeds or remove existing ones; (right) Browsing through a typical news selection. 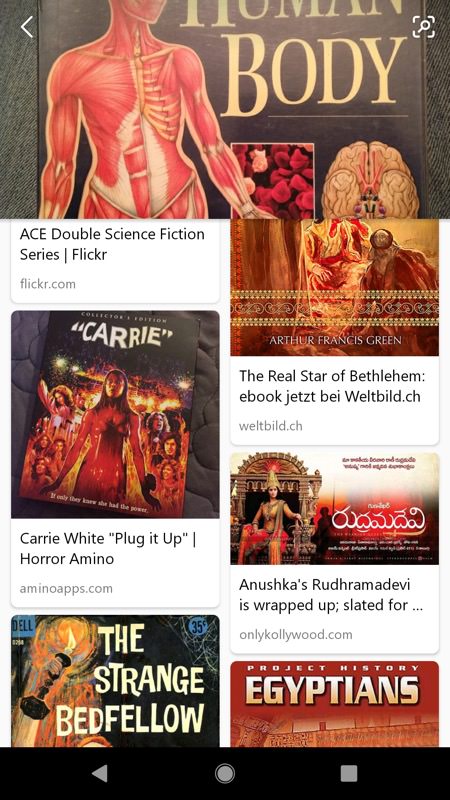 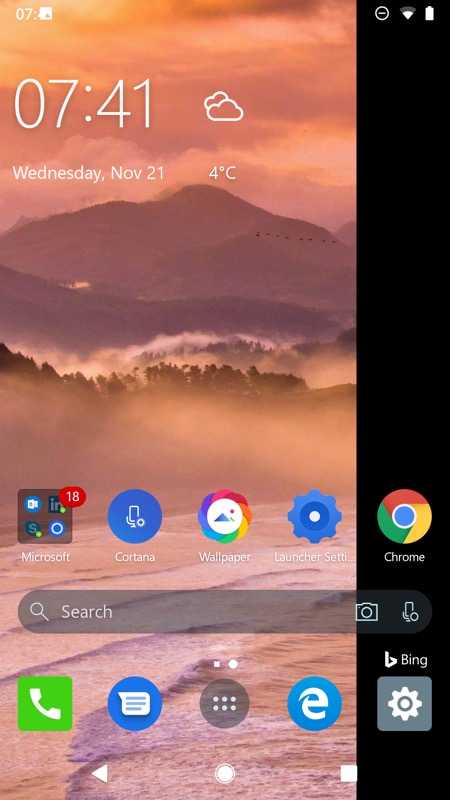 The Microsoft Launcher search system has a camera icon, leading to a visual search for whatever you snap, though its results are very hit and miss. Here I've snapped a book and got some bizarre matches/suggestions; (right) Also emphasising that Microsoft Launcher isn't that mature yet, after dragging and dropping any app icons, the wallpaper gets damaged, with this black bar. Tapping the 'Wallpaper' app shortcut gets you a fresh background, though! 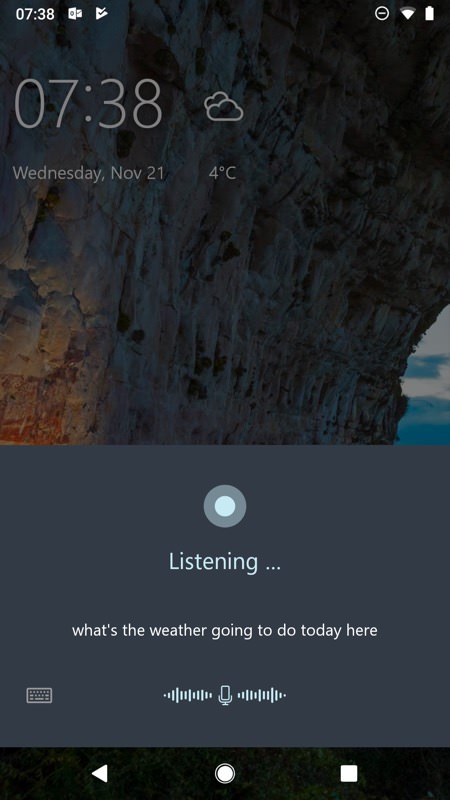 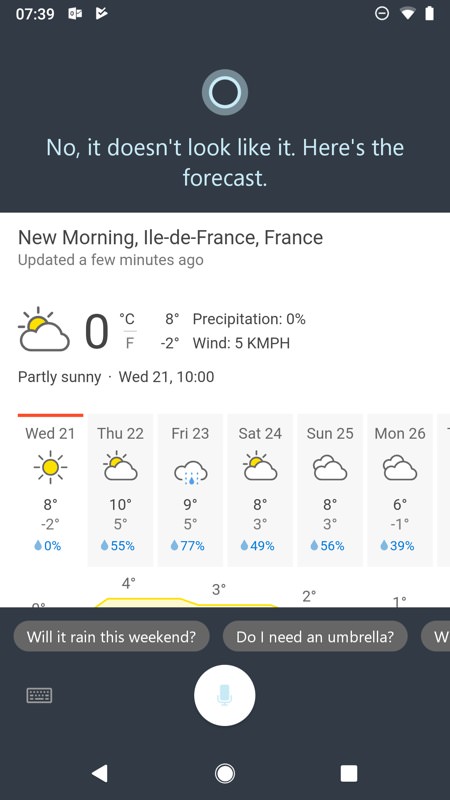 Another glitch. Although my correct weather forecast for my home was delivered on the first try, asking Cortana 'Is it going to rain tomorrow?' jumped the location to another country!! Eh? 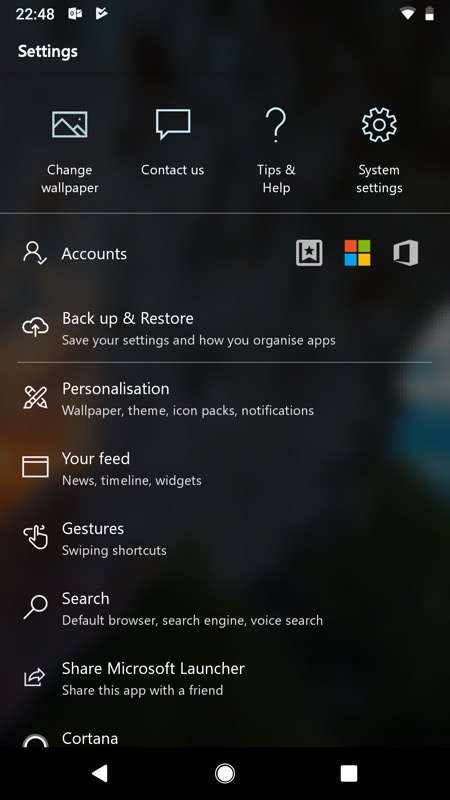 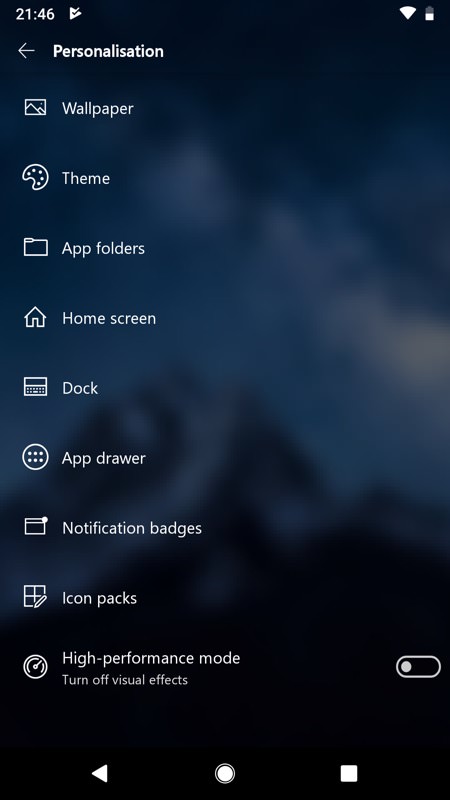 Playing in the Microsoft Launcher settings - there's a LOT to try out. You'll note my own preferences for dark themes and translucency wherever possible! Very pretty... 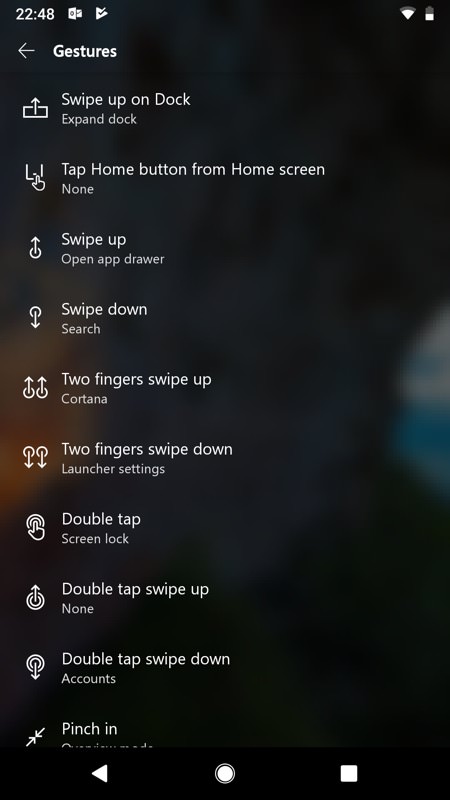 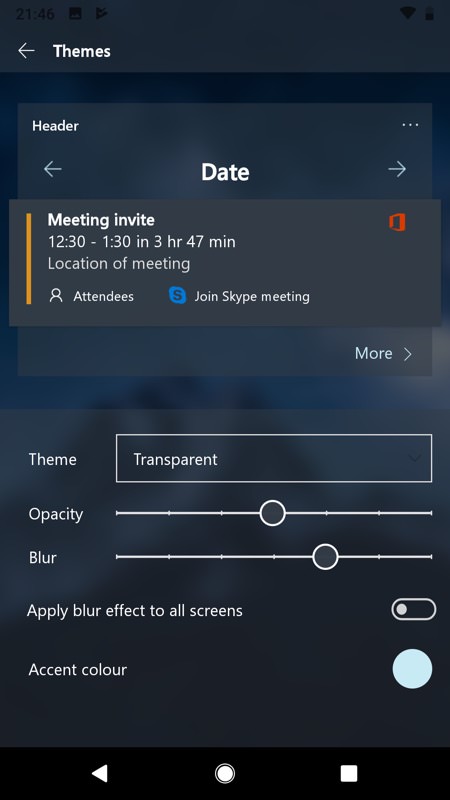 Every possible gesture combination can be assigned, it's all very impressive. Maybe even overwhelming, though the defaults are sensible; (right) As you'd perhaps expect with Microsoft and its Fluent Design initiative, there are themes, plus opacity and blur sliders, and much more. Again overwhelming for the casual user but again the defaults look just fine, so you don't have to fiddle unless you really want to.

Overall, the Android experience under Microsoft Launcher feels further than ever from 'stock' Android (or the Pixel Launcher), but that's kind of the point. You'd install this because you wanted something different, something that's Microsoft centric and which knew all about your OneDrive documents, your Office applications, and your Microsoft PIM data.

Having used this on the Nokia 6.1 (where the screenshots were taken) and then used my Google Pixel 2 XL in tandem, I did prefer the lighter, less fussy approach of the latter's interface. Plus the Microsoft Launcher, even at v5.0, is demonstrably buggy still, which rankles a little in 2018, when Android has been out for a decade and MS Launcher itself is well over a year old.

Yet, despite the caveats, despite the fussiness, Microsoft's Launcher 5.0 is prettier. And it's way more customisable. Given that it's a free download and has no negative effects on your current set up (if you have an Android phone) then why not give it a try?