A day or two ago I put up an interactive comparison of imaging on the Lumia 950 XL and the new IDOL 4 Pro - the newcomer did OK, but fell short of the gold standard, of course. To at least partly redress the balance, here's a more in depth look at imaging on the Alcatel IDOL 4 Pro, with some of the best shots I've snapped on it so far and some tips and tricks along the way...

[Note that I'll cover video capture in another future review part. And note that part 1 of this review is here, with details on the IDOL 4 Pro's hardware.]

Imaging is often a focus (pun intended) in some smartphones - the top end Lumias are a good example, there are a few on Android too, though you often have to pay top dollar to get top cameras. The IDOL 4 Pro's central selling point, as I see it, is merely existing in a Windows 10 Mobile-hostile marketplace! But then again, emblazoned on the side of the retail box is 'Click to Pic!', referring to the dedicated side button to quick launch Camera and also to snap photos.

This works as advertised, though it's not trivial to get used to a camera button where 'power' would be on many other phones(!) If there's a core to the IDOL 4 Pro's feature set then it has to be media, with excellent media playback with loud and clear stereo speakers, and with (so far) super stereo audio capture when capturing video too.

But that button means that there's clearly some concentration on imaging. Which is what I'll look at here. The raw specs for the Alcatel IDOL 4 Pro main camera are:

Of note is that there's no physical stabilisation, i.e. OIS, so there's no way to get rid of user hand shake at capture time, plus the relatively tight aperture means that exposure times have to be longer than they would for, e.g. a Lumia 950, so moving subjects in indoor light (cats, kids) often come out with some blur. You'll see an example or two below.

Also of note and just as important is that there's no way, currently, to capture lower resolution photos with Windows 10 Camera on the IDOL 4 Pro. Why would you want to? Well, the Lumia 950 range oversamples the 16MP down to 8MP and improves imaging results as a result in terms of noise. Or you can have some lossless zoom (though see 1Shot below). And 8MP is fine for almost any use, that's still a lot of pixels. 16MP is simply overkill for most cases, though the Qualcomm Snapdragon 820 JPG encoding is done at a high compresison rate and so actual photo JPG file sizes are no larger than for 8MP Lumia 950 shots.

It's odd that Windows 10 Camera doesn't attempt to offer lower resolutions then, and I guess an update to this application might change things. But we're stuck with 21MP/16MP for now with the built-in software. At which point third party software springs to mind and indeed ProShot shoots at 9MP, while 1Shot (examples of whose output are below) allows shooting down to 2MP while zooming.

But on with what's in the box. Windows 10 Camera launches to an active viewfinder in 2.5 seconds from pressing the camera button. This isn't lightning quick and Camera is clearly not being kept in RAM (as it is on some Android handsets, for example), but it's easily fast enough for most occasions and you can press it 'blind' while taking the IDOL 4 Pro out of your pocket, so that in most cases it's ready for action by the time you raise the phone to your intended subject.

Focussing is automatic and capture is usually instant, though in low light conditions I've seen the software do a double take and go through an extra second of focus lock hunting. But most of the time there's not more than a fraction of a second shutter lag. Processing time, i.e. shot to shot time, is extremely quick, unless you engage HDR mode, in which case you're looking at a couple of seconds while the images get combined. I'd have thought that this could be sped up in a firmware update.

The integration with Windows 10 Photos is absolute and familiar, so I won't go into detail here. Although the niceties of Lumia Creative Studio aren't available here, the Photos editing functions work very well for cropping, rotating and auto-tuning, plus there are a myriad imaging third party tools that you can emply if needed. The usual oddity of all edits resulting in a 'copy' of the original image is here, though in fairness this has saved the day as many times as it's annoyed me, so let's leave that aspect alone.

Right, on to real world examples of main camera output from the Alcatel IDOL 4 Pro. In each case, click the web-sized photo here to grab the original JPG, they're typically a couple of Megabytes: 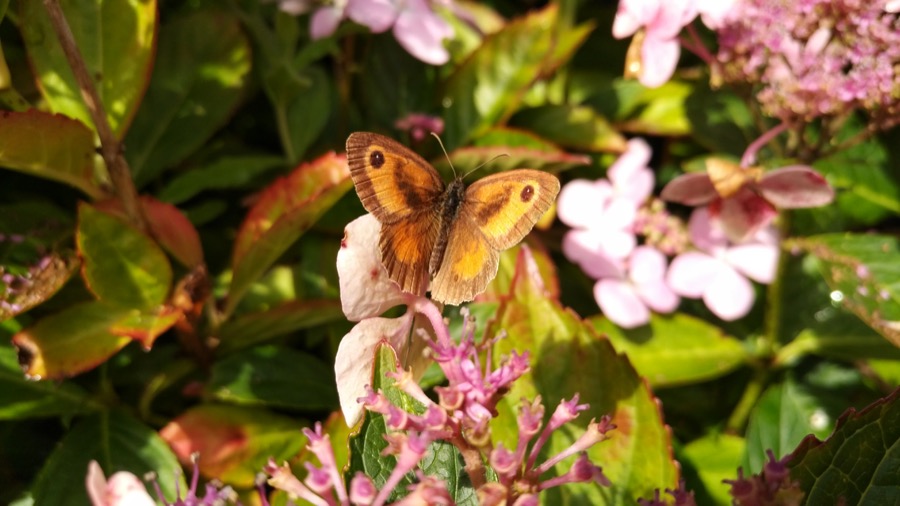 Snapping butterflies is as tricky as on any other phone - getting close enough to capture detail and get good focus without the butterfly getting spooked and flying off! 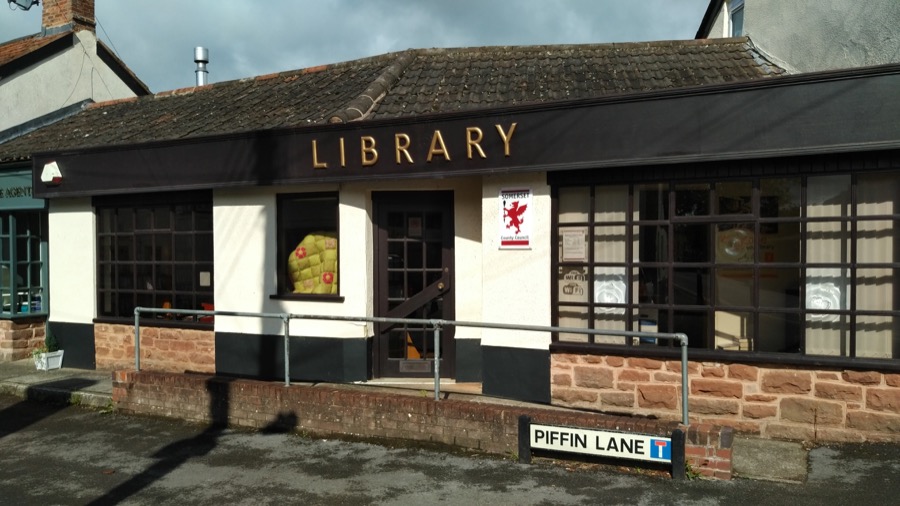 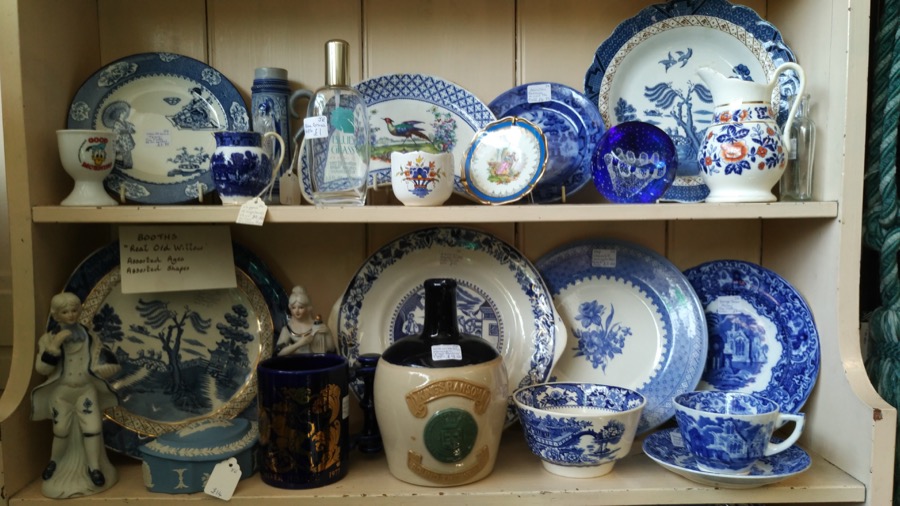 Another nice shot here, in indoor but well lit conditions - look at the pixel level and there's a lack of image processing and sharpening typical of the Sony sensor (and Sony phones) - it's not often I complain about too little sharpening, but more processing is definitely needed here. 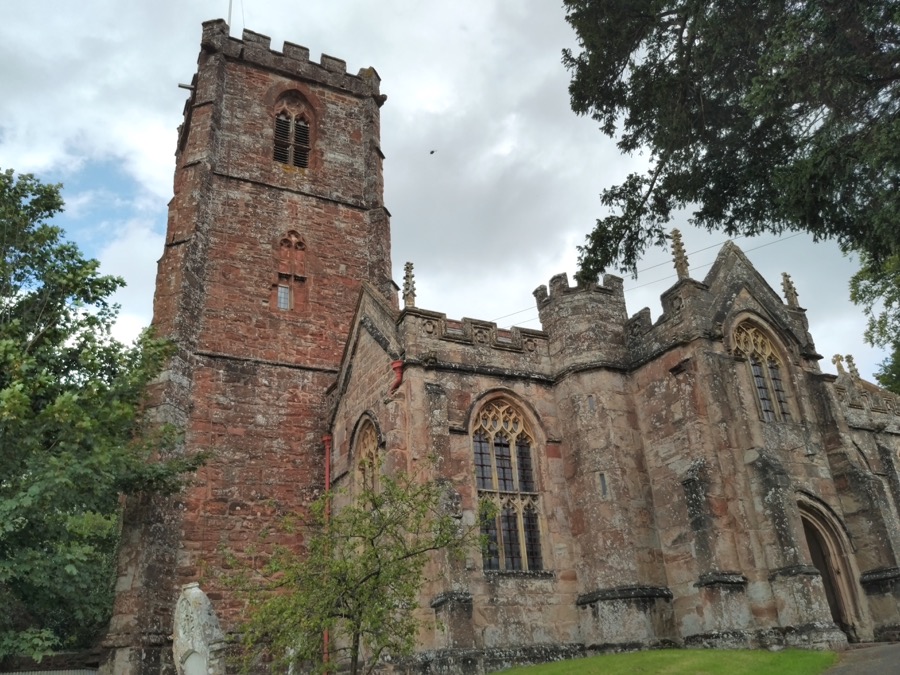 As with many phones with less than flagship camera set-ups, forcing HDR on can often improve things. For static subjects anyway - here's a dramatic shot of a church in overcast conditions that looks better lit than it actually was. Note that HDR is either on or off though - there's no 'auto' setting, as on the top Lumias... 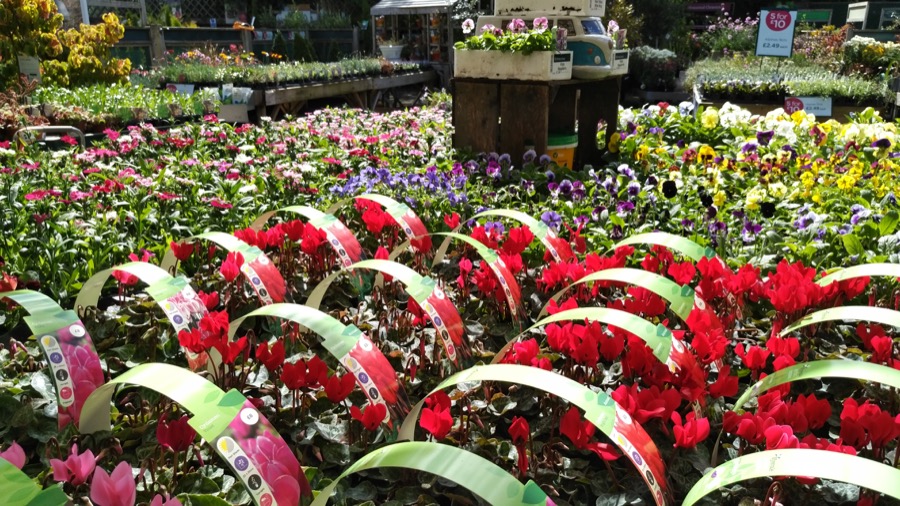 Aha - some sun at last! I couldn't resist the colours in these garden centre flowers. Yes, there are some blown out highlights, but also some good colour rendition. 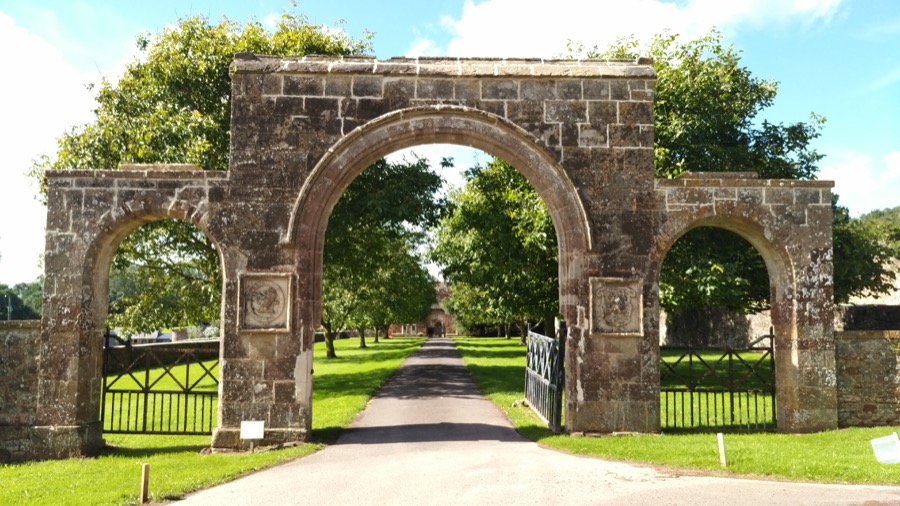 HDR forced on again and with high contrast results. Not terribly realistic colours, but hey, I liked the composition! 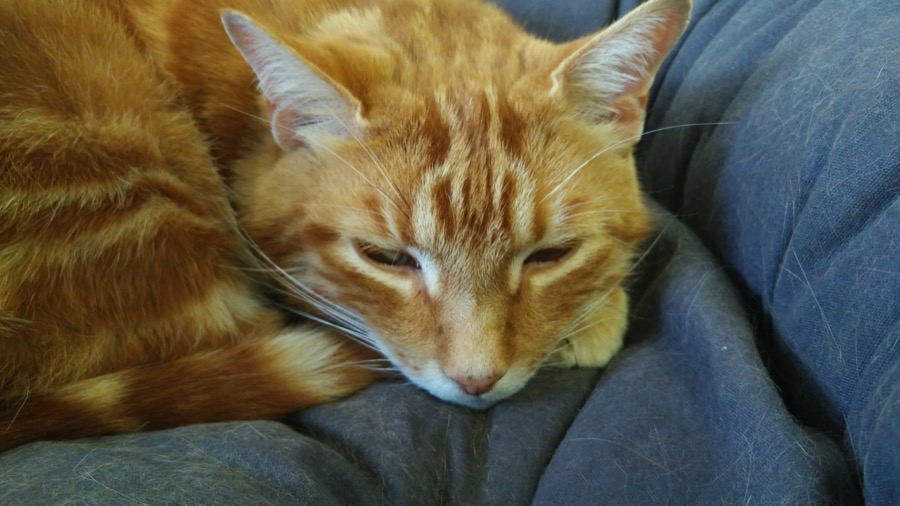 Some live action. OK, not so much with the 'action', but a nice cat shot, with the cat (in low light) staying absolutely still for once! 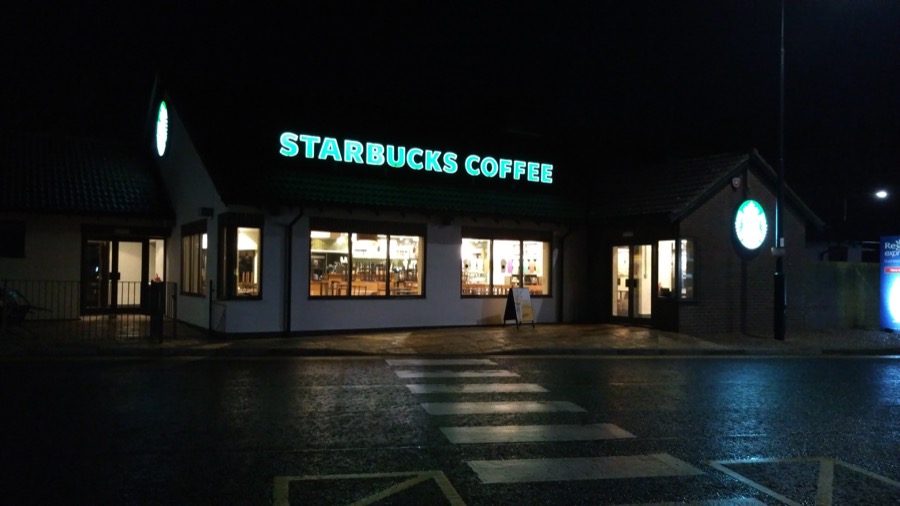 One of the very first test shots I did, in low light - night shots aren't a total mess and often replicate the light levels my eyes see, unlike the Lumia 950 range, which 'turn night to day'!

The other Windows 10 Camera still option, panorama, is available here too and I thought it worth including an example of its use here on the IDOL 4 Pro. Showing how powerful the auto-stitching is, even with close-up subjects (the potted plants below), make sure you grab the full version of this one:

I was really very pleased - and surprised - with how well this one came out, shooting the panorama in about a 150 degree arc...

I mentioned the high native resolution above and that the third party application 1Shot is one way to do something with it. When you zoom with Windows 10 Camera here you just get 16MP of more and more made up pixels, whereas if you use 1Shot and its 'intelligent zoom' (a.k.a. PureView zoom) function then you're smart-cropping into that 16MP array of pixels without ever having to make up detail or interpolate.

For example, here's a shot of a horse in a field: 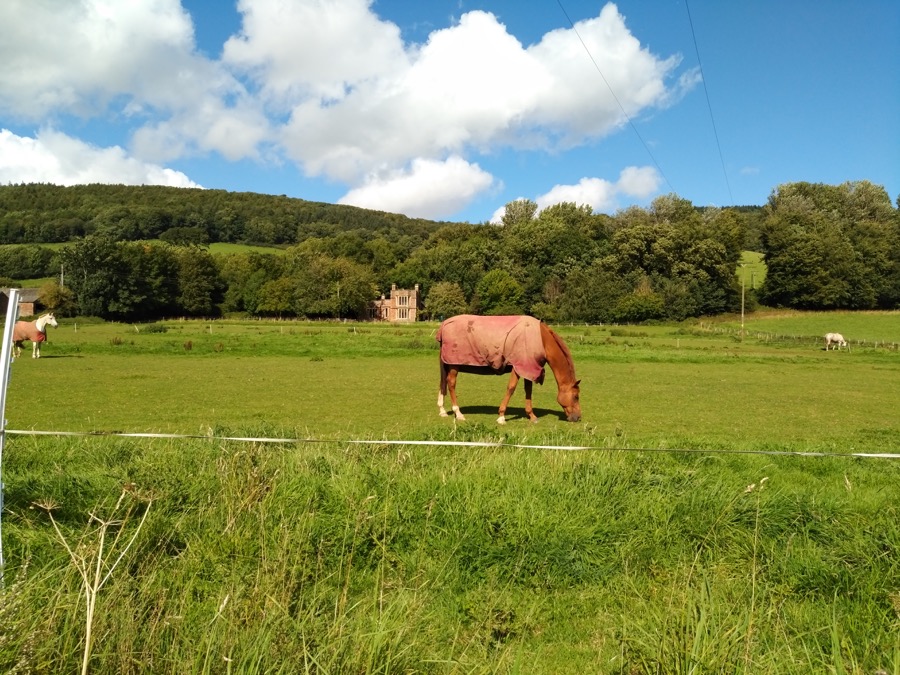 And here's me using 1Shot on the IDOL 4 Pro, using the 'intelligent zoom': 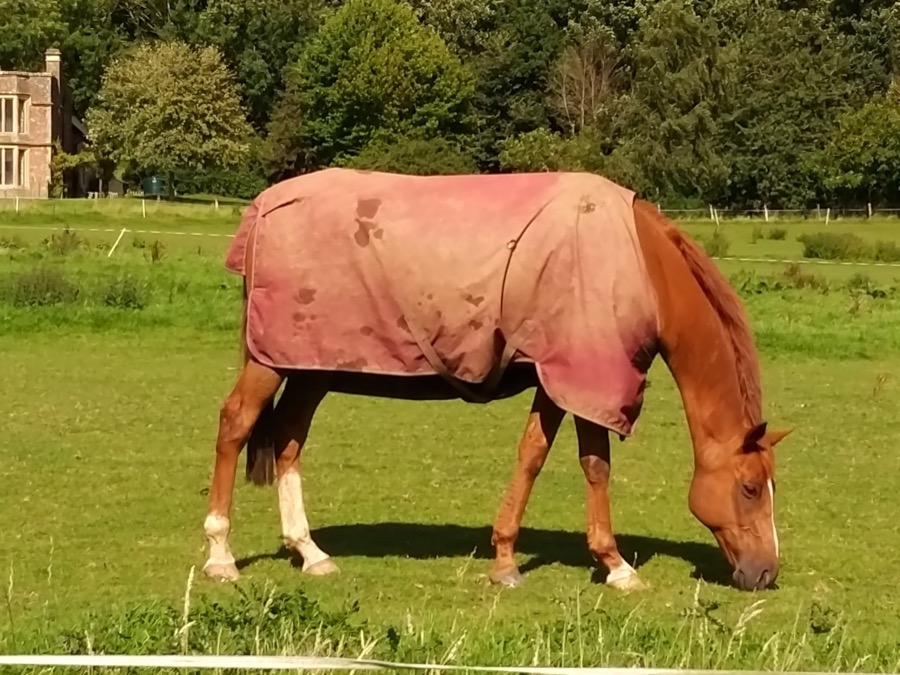 Another example of 1Shot's zoom in action, here's a lake-side snap, with some boating about to happen about 200m away: 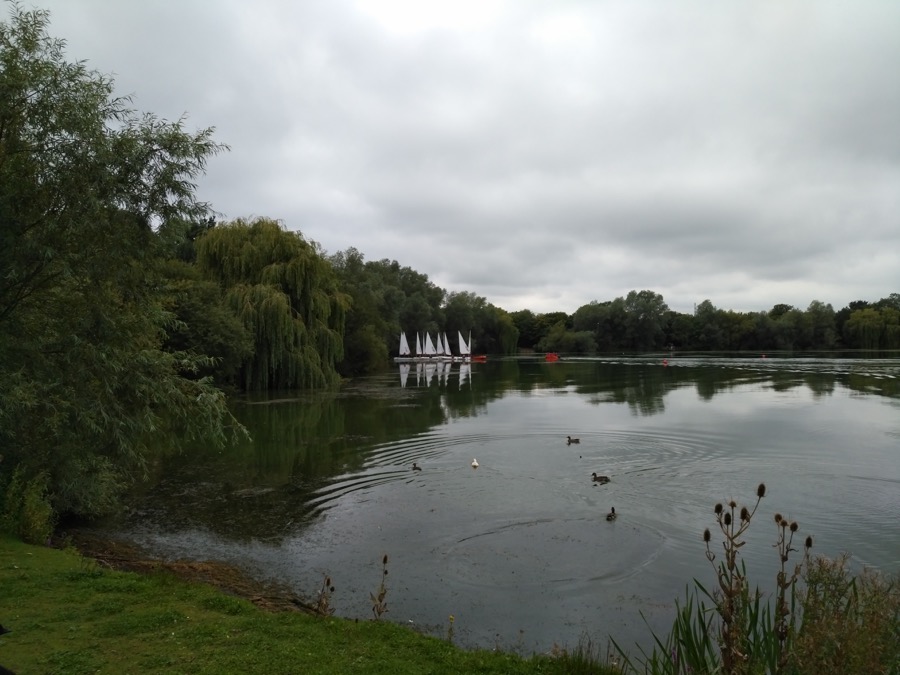 And here's the 1Shot 'intelligent zoom' into the IDOL 4 Pro sensor: 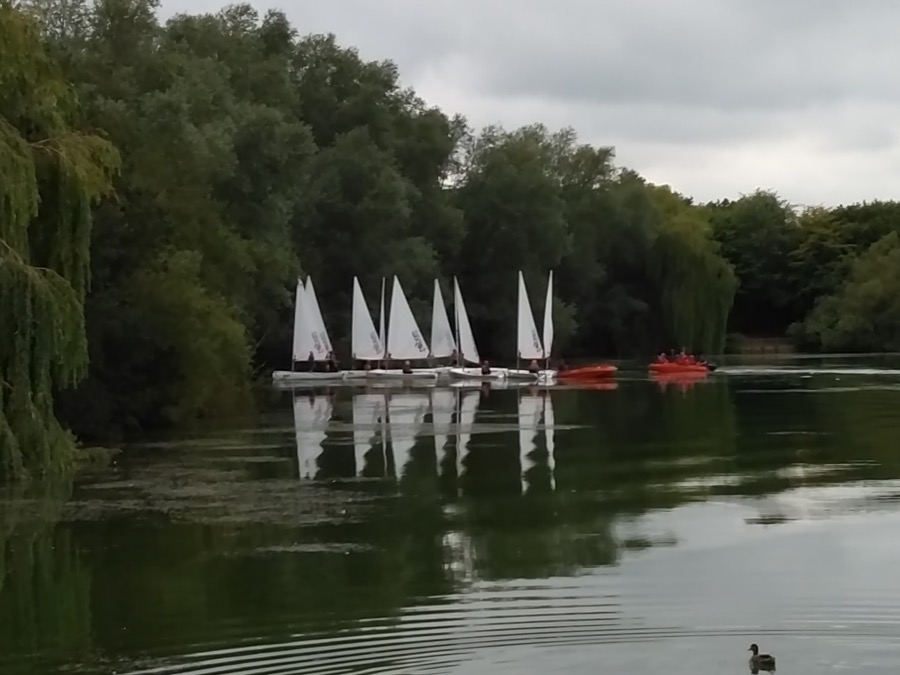 Now, there's a certain 'smoothed' quality to the zoomed images here, this is all happening in the Snapdragon 820 image signal processor as part of its Bayer filtering, noise reduction and then JPG encoding, even if 1Shot then does something different with the result.

Still photos are generally good enough, even for 2017, on the IDOL 4 Pro camera - it's not going to defeat the Lumia 950, the iPhone 7 Plus, the Google Pixel, and so on, but it's up with the typical second-tier mid-range handsets. And, for a phone in an otherwise sparse hardware ecosystem, at a mid-range price, is quite acceptable.

Your comments welcomed though.

PS. In the next review part will be a look at video and autio capture on the IDOL 4 Pro. Watch this space.