The Z Fold 2 arrives to take on the Duo, but still plenty of caveats

So, here's a puzzler for you... What has two screens, folds to (almost) any angle, has multiple 'poses', allows for multi-pane displays within individual applications, and is integrated tightly with Microsoft applications and services? Answer? The Surface Duo The new Samsung Galaxy Z Fold 2, which arrives a mere week after the first review Duos hit USA-based reviewers. There are a huge number of similarities - plus a huge number of differences, and I thought it worthwhile breaking them all down. Both are, of course, stupidly expensive - but here's my take, regardless.

You'll have seen my previous Surface Duo coverage here, of course, latest being the 2020 launch news. I won't go over the links yet again. But in case you missed the details of the new Z Fold 2, here's the official Samsung launch announcement. It's only 22 minutes long and moves quite fast, so it's worth a watch over a beverage, to get caught up:

All of which is... pretty impressive. £1800 is an enormous price tag for a smartphone, but I'd say that with the Z Fold 2 you can at least see where the money has gone. Below, I compare the Surface Duo and Galaxy Z Fold 2 in detail in my usual tabular fashion. Why compare these two devices specifically, other than launch timing and sky-high price? Because a lot of the fabled Microsoft productivity gains also apply to the Z Fold 2, with Microsoft's explicit help.

For example, here is a screengrab of the Galaxy Z Fold 2 running Outlook Mail, running a two paned layout that's near identical to what you'll see on the Surface Duo - but without a black 'hinge gap' down the middle: 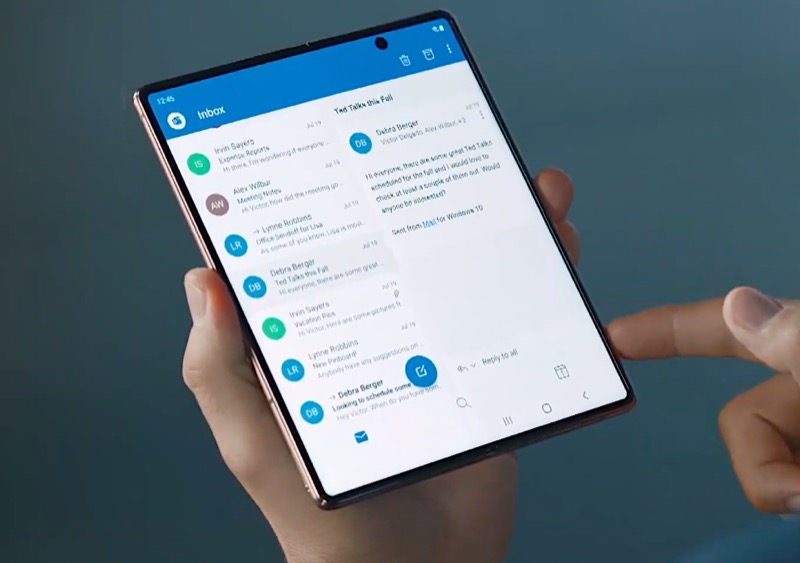 The parallels go further in other 'poses', for example here in what Samsung calls 'Flex mode', showing a video calling application taking advantage of two displays and a hinge that can be propped at any angle: 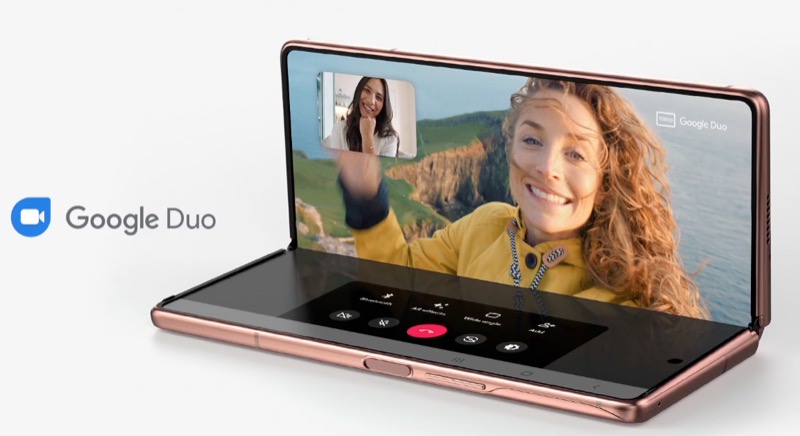 So yes, the Z Fold 2 achieves the end result through a flexible display (ultra-thin glass with a plastic outer layer), but the end result is largely the same. The main difference is that while the Surface Duo (elegantly) folds back on itself so that one of the main displays can be used as a single-display 'phone', the Galaxy Z Fold 2 has an extra, large cover display on the back of the left hand side of the unit - which is at least partly why the retail price is so high.

Anyway, on with the specs and comparison comments:

In terms of specifications and hardware capabilities then, an overwhelming, massive 8-1 win for the Samsung device, while seemingly offering everything that the Duo does in terms of software experience (and with the same underlying 'compatibility') and without a dominating central hinge. Easily justifying the extra £400/$400 or so, you might argue.

In the Surface Duo's defense, it:

Are these enough to compensate for the massively one-sided bang-for-buck comparison? I'm not sure. If it were my money (and note that neither of these will see my money, at least not at full original RRP!) then the imaging, speakers, Qi charging, and NFC (Google Pay) would convince me to go big and go for the Samsung. What about you?

Filed: Home > Features > The Z Fold 2 arrives to take on the Duo, but still plenty of caveats