Should you take 'zoom' a lens at a time?

It's potentially a technological hot potato, yet 99% of the world has come down on one side of the argument and Sony on the other. And it's not something we've ever covered in any detail. Essentially, what should go through your mind when using zoom (or ultra-wide) in a smartphone camera? Specifically, should you think in terms of using a particular lens for a particular shot or should you 'wing it' and fiddle with the interface until framing is perfect? Here I demonstrate that the latter approach is fraught with image quality problems.

We've become used to smartphones usually now having three cameras on their backs. Typically an ultrawide, a main, and a telephoto. Yes, some budget models swap out the latter for something gimmicky like a macro lens or monochome sensor, but let's keep things simple for now.

The interesting - technical and philosophical - point is what happens between these three zoom factors? Now, if you're the sort of person who just jumps between the (e.g.) 0.5x, 1x and 3x presets in the UI (corresponding to the lens zoom factors in hardware) then the whole question is academic.

But if you use the presets as a starting point and then zoom in or out as needed to frame your shot in a particular way then it's very, very likely that you'll be capturing a shot with a lot of 'made up' pixels from digital zoom.

For example, say you're tring to capture a subject five metres away and you want to get a bit closer. The main (1x) lens is too wide for you, so you tap on the (say) 3x zoom preset and, inside the phone camera system, the telephoto lens is then used. But you decide that you're now a little too zoomed in and that you want to move out slightly. So, using multi-touch or an on-screen zoom slider, you zoom out to (say) 2x and you're then happy with the framing.

Except that three quarters of the pixels in your image are made up. A soon as you dropped below (in this example) 3x zoom the phone software switched back to the main lens and, at 2x, youre only using the central quarter of the main sensor - the rest of your output (say) 12MP image is made up of, well, 'made up' pixel data, interpolated from that central quarter.

The same applies if you're on the main sensor at 1x and you decide to zoom out a little. Even at 0.9x, you're dropped back to digital zoom on the ultra-wide camera, with suitably compromised results. Ah yes, the advantages of a continuous zoom range on a phone camera.

Which is why (I believe) Sony went with a very 'discrete', DSLR-like approach for their recent camera-toting smartphones. I have the Xperia 5 ii and at each stage in the UI you have to make a conscious choice as to which of the three cameras/lenses are used. Sony even goes as far as to label them in many parts of the imaging interface with their actual focal lengths, 16mm (ultra-wide), 24mm (main), and 70mm (3x telephoto), analagous to a DSLR user switching out a particular lens with a different one, screwing it on physically.

I've been a bit dubious about this approach, but given my comments on accidental digital zoom for unsuspecting users then I'm starting to be won round. I've said for ages that users should stick to the native zoom factors in their phone, jumping between presets and not then zooming further (or out) - and the Sony Xperia 5 ii is also usually used like this, so for casual purposes there's no effective difference between the approaches. 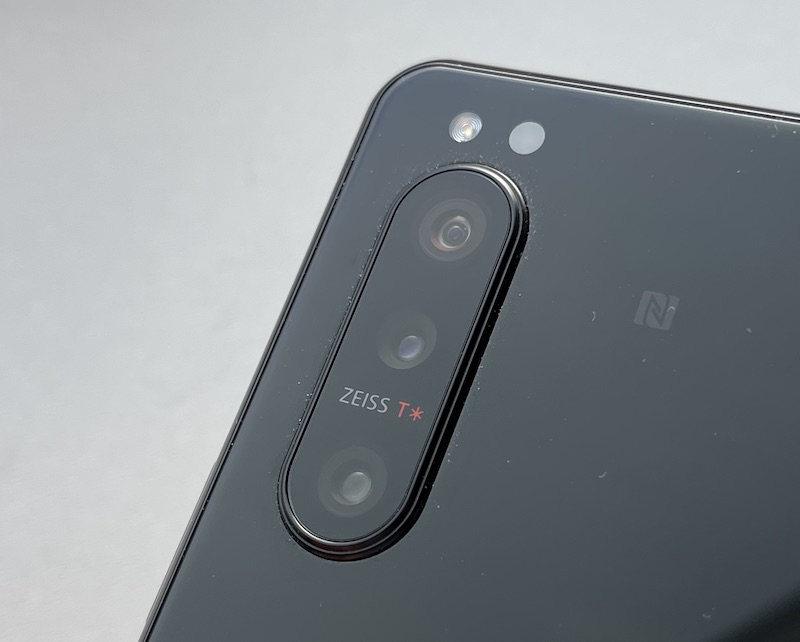 Where things differ is that in the Sony camera interfaces (there are two, one for regular users and one for 'pros') don't allow zooming out from any of the presets, i.e. from 1x or 3x zoom, so you can't accidentally multi-touch or slide-zoom out into heavy digital zoom on the 'preceding' lens. True, if you really know what you're doing then you can zoom 'in' from any of the lens presets, to apply a degree of digital zoom, but it's not really recommended. The idea is to pick a lens and largely stick to it. If the cropping isn't right, then change your phone camera position (if possible) or shoot and then crop the 12MP image later on as needed.

But is digital zoom that bad? Yes, even in 2021 - making up/interpolating detail is never good and the more you zoom in digitally then the uglier the results. So yes, a system that stops you, say, accidentally zooming out slightly from a 3x telephoto shot and back to (say) 2.7x digital zoom on the main lens, is a very good thing. Note that on a phone-sized 1080p display you really can't tell there's a problem on another smartphone - the zooming and detail appear smooth and it's only when you get back home and exmine your photos on something bigger do you notice something went very wrong.

To demonstrate just how bad results can be, I took a couple of test shots with a 3x phone camera lens and then took the same shots at 2.7x digital zoom on the corresponding phone camera main lens.

A local church on a somewhat overcast day. Plenty of detail to look at, though. Here is the overall scene, from ultra-wide, main, and telephoto: 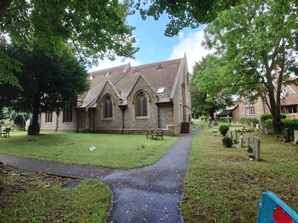 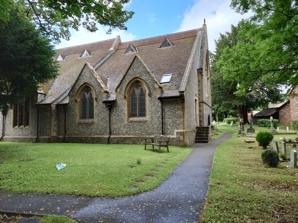 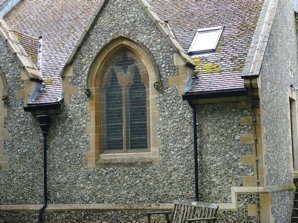 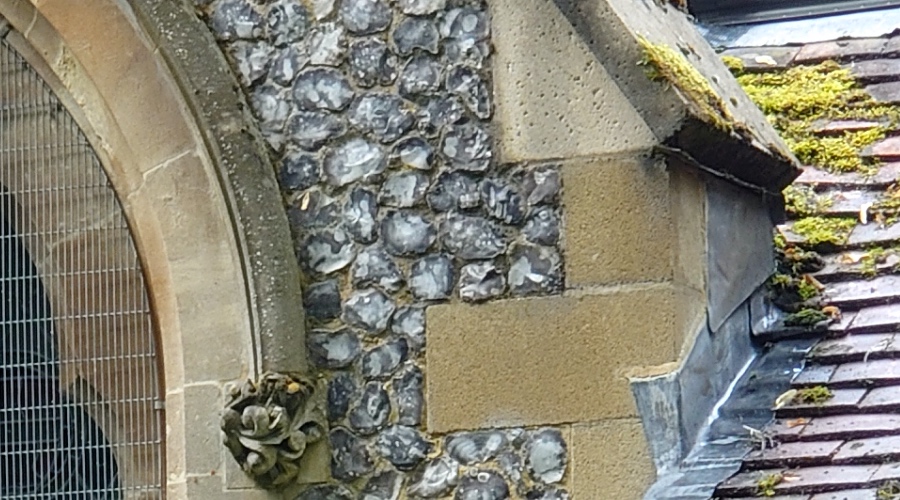 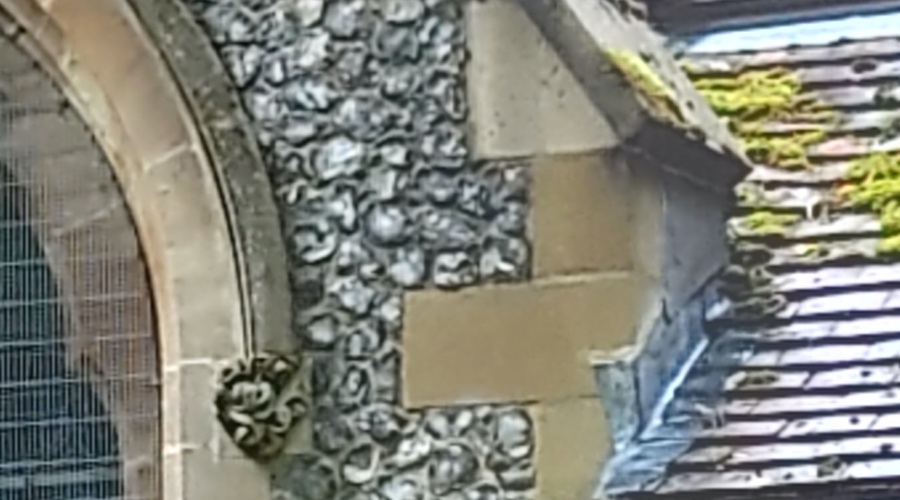 Seen at 1:1, digital zoom is seen as the evil that it really is. This is the downgrade in image quality that Sony is (probably rightly) preventing its users from slipping into. Now, these are 12MP sensors and a lot of modern phones use a 48MP sensor instead , so surely digital zoom will be better on these, with some PureView-style smart-cropping? Well yes, and no. In theory, smart-cropping into a RGB 48MP sensor could be done almost losslessly at 2x, but in practice these 2021 sensors are 'Quad Bayer' (i.e. 2x2 blocks of a single colour at the sensor level) and digital zoom is barely any better than software zooming into a regular 12MP RGB sensor. And 2x to 2.9x zoom is out of the question again - even though the software interfaces tend to allow it.*

* In fact, even Sony's software allows up to 3x digital zoom from each zoom preset, which I strongly disagree with - Sony, what about a toggle to stop this degree of 'extra' lossy zoom (as on the original Nokia 808 or Lumia 1020, for those with long memories).

Lest you think I've made an error with the images above, I repeated the test shots on something else, and picked a flower display a metre away, for a change. Here is the overall scene, from ultra-wide, main, and telephoto: 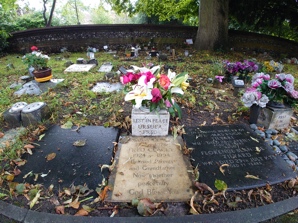 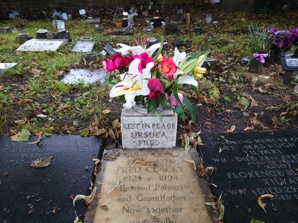 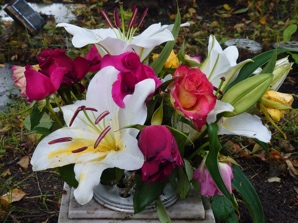 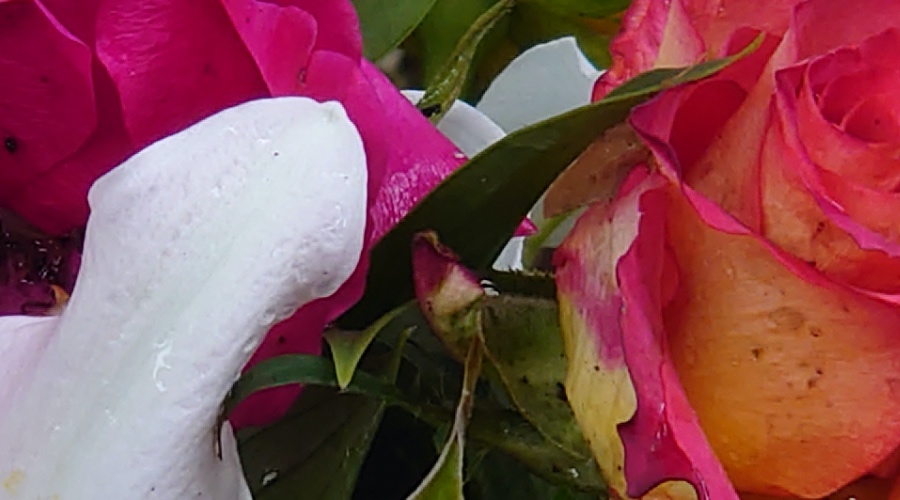 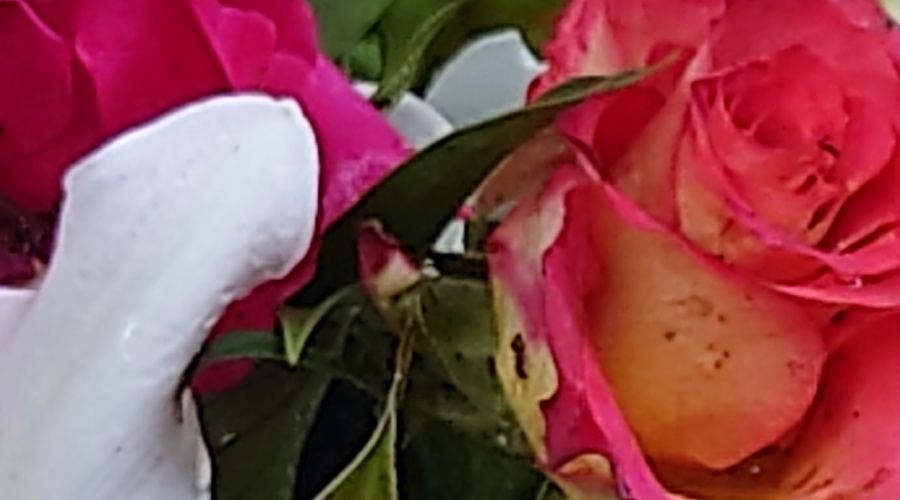 As before, the difference between optically-collected detail and 'made up' digital zoom, for almost the same zoom factor and framing, is dramatic.

Back in 2008 on AAS I declared that digital zoom was evil and best avoided at all costs. And although there have been some exceptions and bending of this principle over the years on specific devices, the general rule still applies.

Your comments welcomed then - would you prefer a zoom continuum in a phone interface, from 0.5x through 1x and then to 3x and beyond, all with no restrictions, relyng on your own knowledge of the device and your own skill and judgement to get the best from the sensors? Or do you welcome Sony's discrete lens choice/set-up? It's a fascinating question. Certainly the latter approach might save a user like you or I from our own good framing intentions.

And the latter also encourages us to think in terms of a creative decision when deciding to take a photo, i.e. will this be an ultra-wide, a main, or a telephoto shot? Each not only have their own focal lengths and framing, but also their own pros and cons. For example, the main is by far the highest quality in low light, the ultra-wide has distortion challenges, and the telephoto has a relatively narrower depth of field, plus it needs more stabilisation in less than perfect light. There's a lot to bear in mind here and, on reflection, the more a phone camera interface can do to make life simpler while stopping major creative mistakes, the better.

PS. There's one other factor that applies in low light. With explicit control over which lens is used, you can zoom in low light with the Sony system, while most other phones (including the iPhone) drop back to the main camera and use digital zoom once light is very low. Worth noting.

PPS. Having covered the Sony Xperia 5 ii here, it's worth pointing out that my initial camera head to head with it was eight months ago - and the smartphone has had the same number of updates since then, many referencing the camera system. So, buoyed up by the image quality in the shots above, I reckon it's time for a re-test and see how much Sony has improved things.

Filed: Home > Features > Should you take 'zoom' a lens at a time?