One of the biggest services that is still easily accessible under Windows 10 Mobile at the end of 2021 is YouTube. But even here there are some caveats and notes, which is why I thought a round-up would be a good thing. Exactly which are the best ways to catch up with your YouTube subscriptions and suggested playlists two years after the platform itself stopped being supported by Microsoft?

Back in the day (2011), YouTube was the centre of a bit of a spat between Google and Microsoft, of course. The latter made a rather good Windows Phone 8 (Silverlight) client for Google's YouTube but without the possibility of adverts. Which then annoyed Google, who forced Microsoft to first cripple and then remove the client altogether, despite promises to bring it back. After all, by then, Google had its own mobile ecosystem in Android and why would it encourage access to one of its crown jewels from a rival OS?

Happily, a combination of Google official APIs and reverse-engineered web-scraping cleverness enabled at least half a dozen third party clients, at least two of which still work pretty well today, in late 2021. But which ones, and what other options might there be?

I revisit the various YouTube clients several times a year as part of maintaining my Windows 10 Mobile Services page, of course, but I thought this service deserved an up to date briefing. Not least because I'm a huge YouTube fan and spend at least an hour a day browsing around, enjoying creators, enjoying old retro clips, enjoying music concert videos, enjoying sporting moments... it's all there on YouTube.

Although it's possible to view most of YouTube without signing in, you do get all the benefits of playlists, history, and so on, if you sign in. So for the testing below, I signed in fully from scratch through my Google two-factor authentication, making sure that this was still possible even on 'ye olde' Windows 10 Mobile.

(The title links go to the Microsoft Store.)

This UWP client still works, but I should note that it's perhaps the least responsive of the options on this page and is awaiting updates from its developers (I'll keep readers posted). 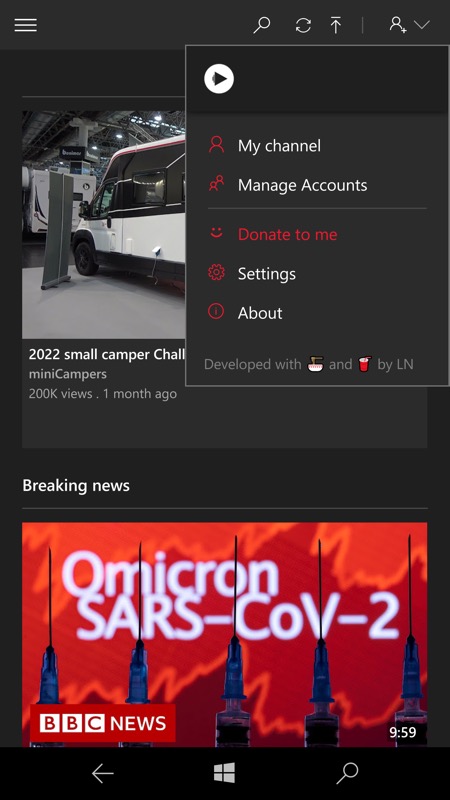 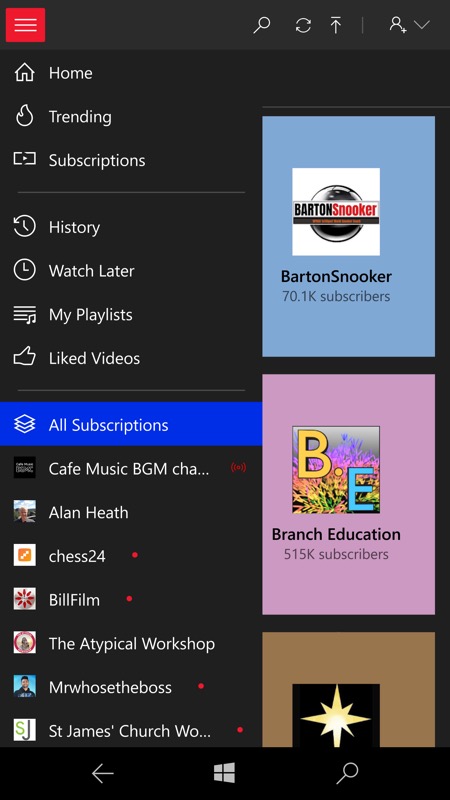 Starting in Awesome Tube with YouTube's own recommendations for your account (taking into account likes and recent views, etc.), then browsing my YouTube subscriptions, with artwork somehow found for each. 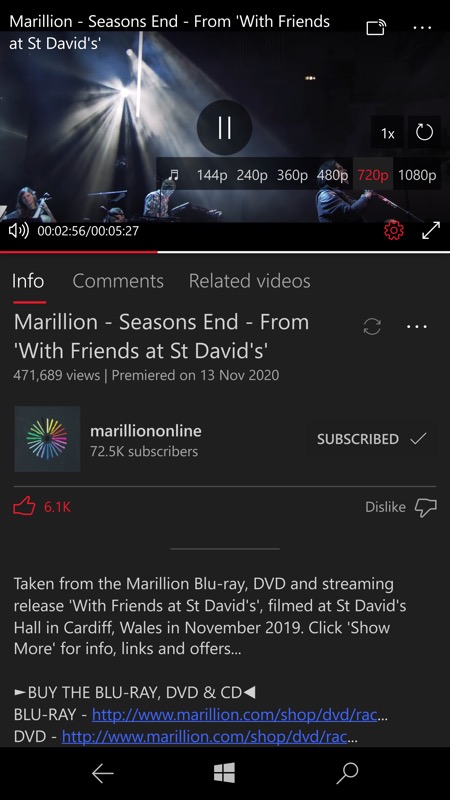 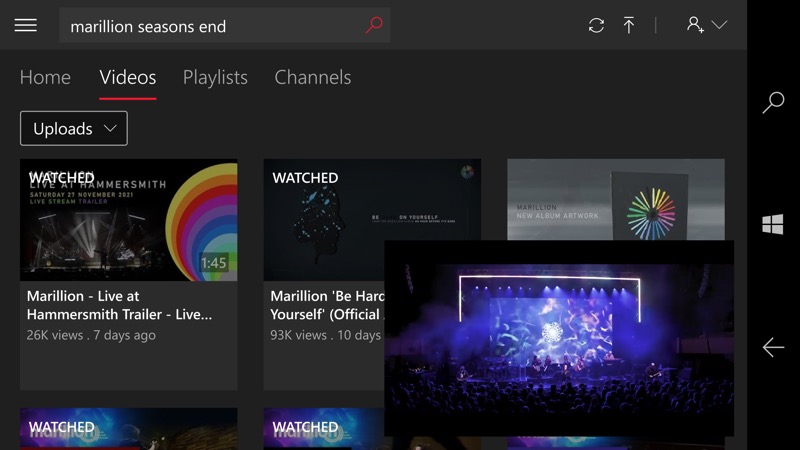 While watching, you can scrub along the timeline, but the play position isn't very responsive. There's the option shown to reduce the quality and bitrate, but this only helped a little, so again we're waiting on updates from the developers; (right) just for fun, trying the landscape view, this being a full UWP application. And note the handy picture in picture option.

Updated only yesterday, this is by far the most updated and active YouTube UWP client. Credit to the developer for still compiling for Windows 10 branches that encompass phones. 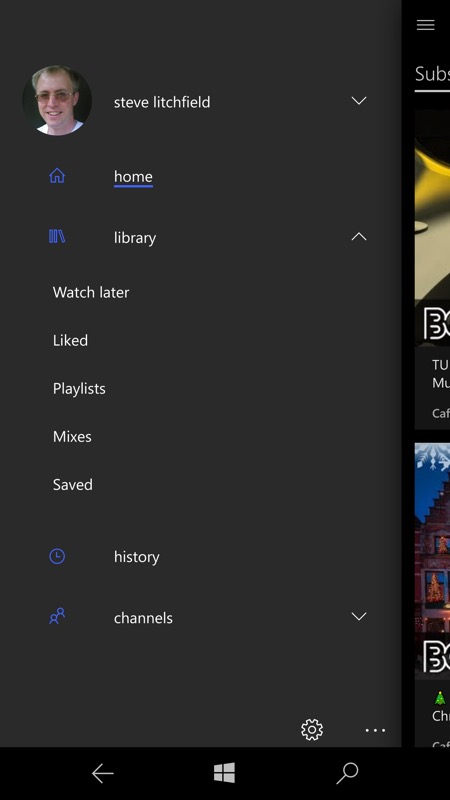 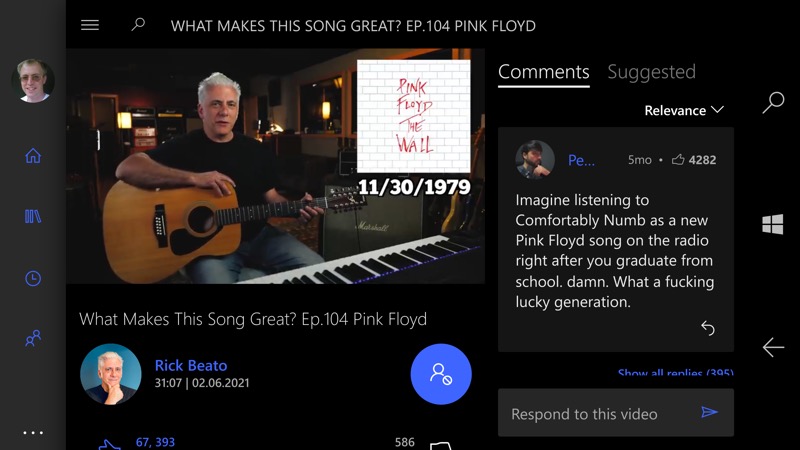 Slightly odd UI spacing, but still all clear, and the picklists expand and collapse properly; (right) it's not only UWP, but myTube! is a superb example of the breed. Here in landscape mode, with UI controls on the left, video playing in the main strip and then browsing comments on the right. Terrific! 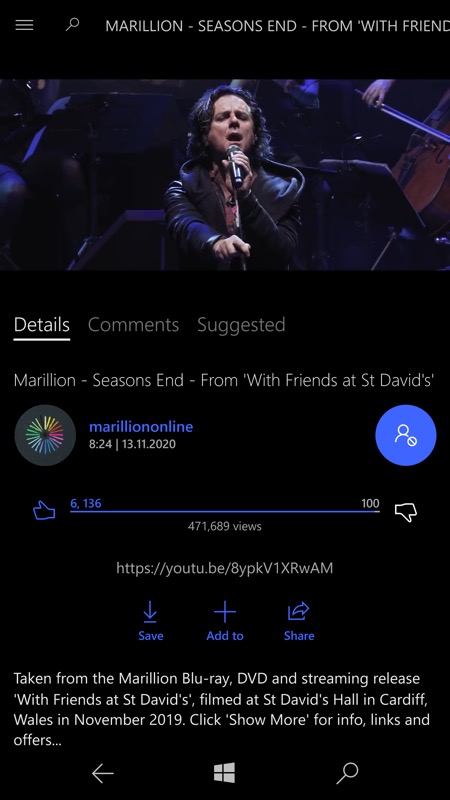 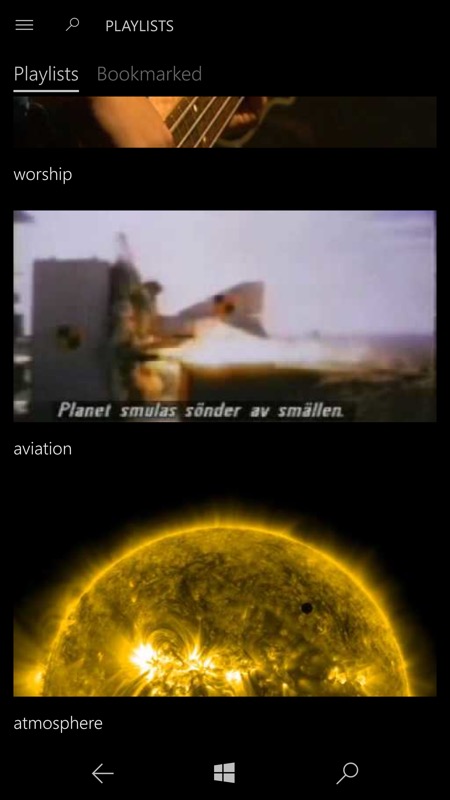 Enjoying the YouTube comment, here tabbing between description and comments; (right) browsing my playlists... If some of the UI spacing is odd in places, remember that this is being optimised now for the Desktop and continued compatibility and operation on Windows 10 Mobile is just a very nice surprise. 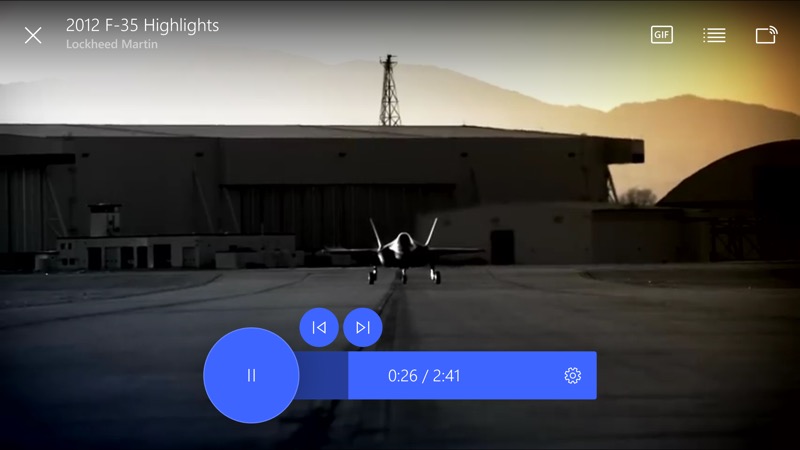 Playback is smooth (here in full-screen) and tapping the video brings up a thick and scrubbable timeline ( - and with the latest update this is responsive and playback resumption is instant!

I should explain that by this I mean go to 'youtube.com' in the built-in Edge browser. YouTube changes its site code regularly (partly why third party clients have to keep being updated), but it currently plays very well indeed with the old Edge browser. It's a PWA (Progressive Web Application), though of course some of the more advanced features that you'd see in (e.g.) Chrome on Android won't work on our older platform here.

Still, the overall experience is, if anything, almost as smooth as myTube! above, helped because you're interacting directly with the service rather than relying on layers of (potentially) third party scrapes, APIs, and hacks. Here's YouTube in late 2021 in Edge on my Lumia. The only obvious downside is that you have to put up with the URL bar for anything other than full-screen playback, this being a browser: 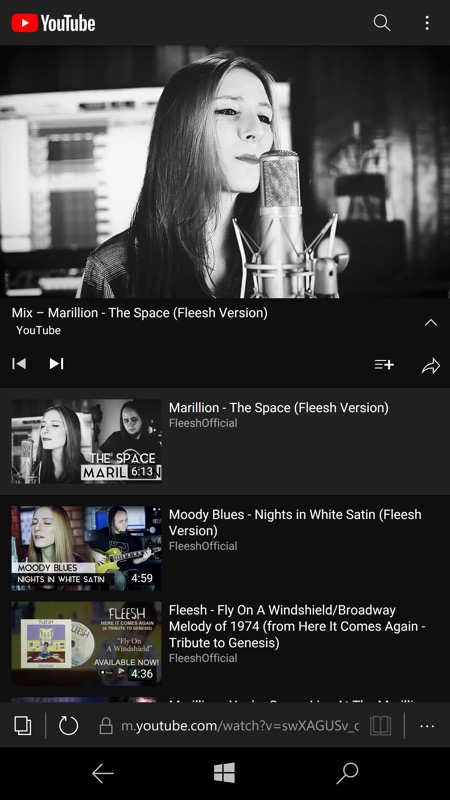 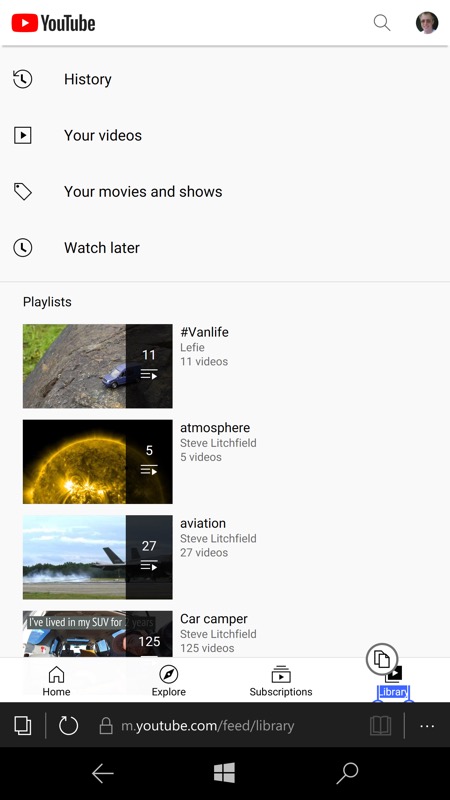 A familiar, if bare bones, interface. When signed in though, everything you need is here - you can swipe away the Windows controls but you're stuck with that URL bar! Also worth noting is that because this is all effectively a web site, the theming sometimes slips and you get a white background, as above, right. Oh well. 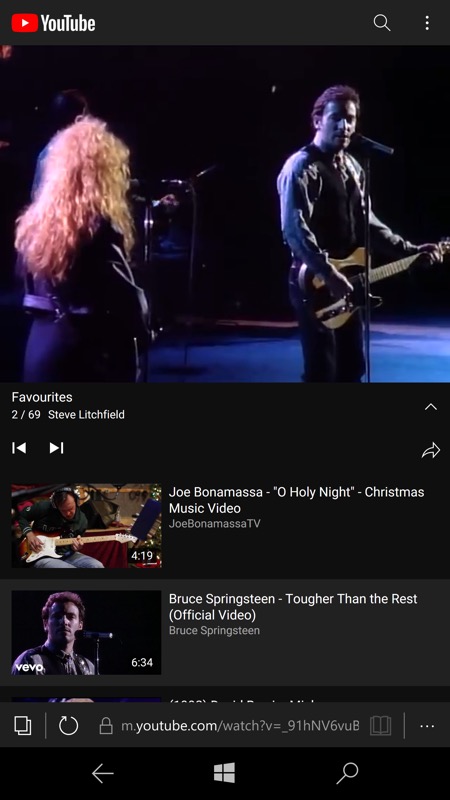 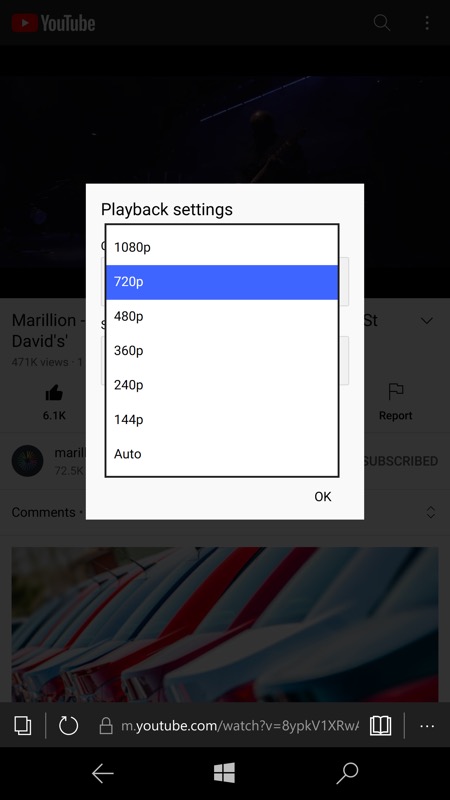 Watching the Boss in my Favourites playlist! Note that even though this is all in a browser, you still get a picklist to specify resolution (and therefore bitrate).

I did try Perfect Tube and a few other options from the Store, but the former doesn't sign into YouTube anymore (again, waiting on updates, no doubt), while other claimed clients were adware and a right nuisance (take the first reviews of any new app in the Store with a huge pinch of salt, as it will be the developer's friends, or even the dev himself under an alias!!)