The best photos captured on Lumias in 2016?

The best photos? Well, some of them, at least. While flicking through some old paper DSLR magazines I was reminded how we can all learn from, and be inspired by, the photos taken by others. With that in mind, I've gone through some of the Lumia groups on Flickr and plucked out examples - all from 2016 - that are particular noteworthy. See which of these you like and then be inspired to match them!

Of course, Lumia smartphones don't have a monopoly on great phone-shot photos. But the hardware in the Lumia 1020 and 950/XL range, in particular, is still top of the heap in the phone world when it comes to image quality, plus the 'pro' mode in Lumia Camera/Windows 10 Camera is still being copied today by other manufacturers on other platforms.

So, in no particular order, settle back with some bandwidth and a beer and enjoy...

Snapped on the Lumia 1020 - and I do wonder how many 'takes' it took to get the framing and exposure right!! 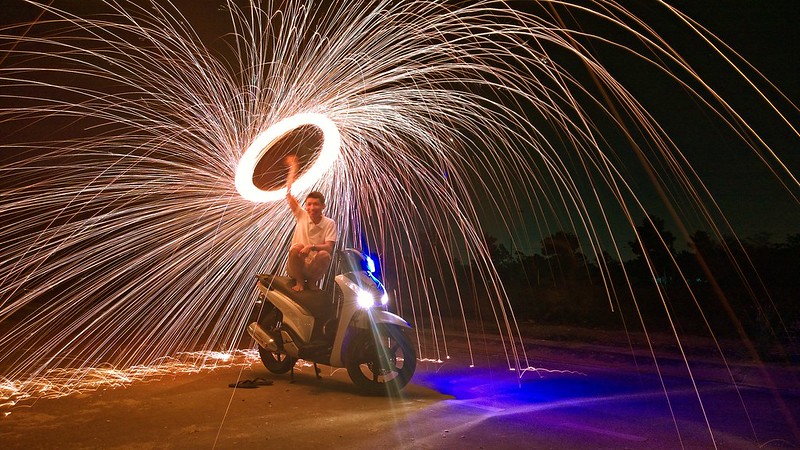 This is seemingly straight from the 1020, though I do wonder if some extra saturation was added in Lumia Creative Studio etc. We've seen long exposure light trails before in Nokia promo articles, but this is a perfect example shot by an end user. Wow. 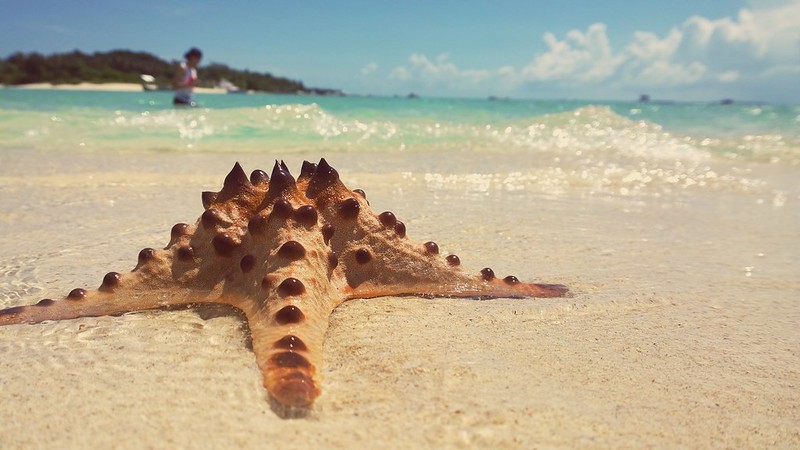 A stunning use of close focus and depth of field. Terrific attention to focus and dreamy lighting in a tropical beach setting. Even the framing works, kind of, on a 'rule of thirds' basis! 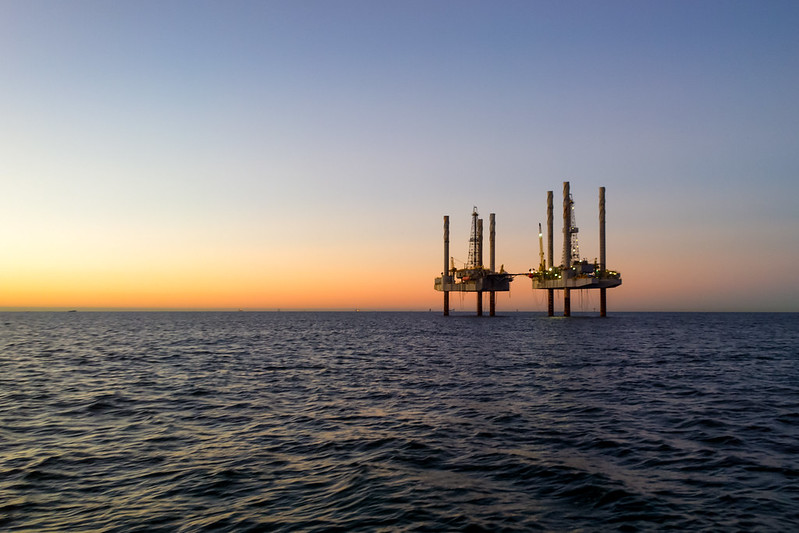 One my favourite 'tricks' for water shots is to make it look like I'm shooting ON the water. In this case possibly from a boat or pier? Anyway, the idea is not to give a clue as to where the photo is being taken on. I also loved the level horizon, the pure, oversampled 1020 capture of the graduated horizon and the incredible detail on the rigs.

Snapped on the Lumia 950 in 16MP mode and then cropped slightly and tweaked to black and white in Lumia Creative Studio:

What's unusual here is the subject, of course, you don't often see a car covered in cob webs! It's a model, but the effect is still striking - there's a colour version on the Flickr account too, if you'd rather see that. Great macro work by the Lumia 950 too, with good bokeh. 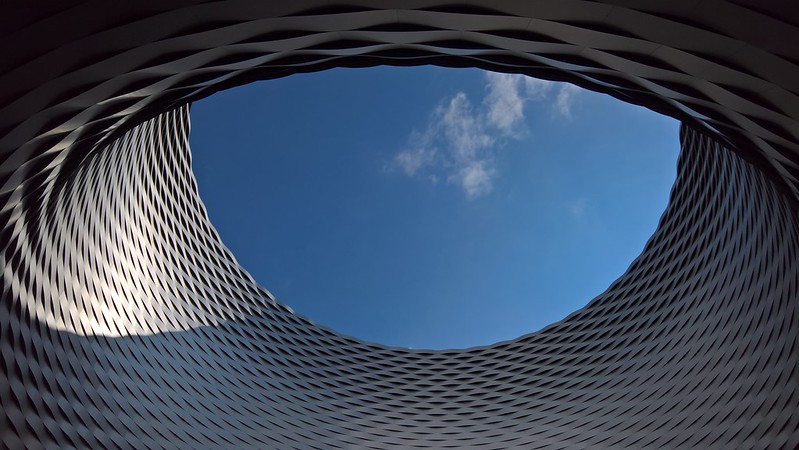 OK, so there's little that's technically challenging here (i.e. in terms of lighting), other than spotting the opportunity for this artistic viewpoint/angle in the first place. Whenever you see huge regular structures and patterns, look for a way to use this in an interesting way.

Snapped on the Lumia 950 and obviously cropped in quite a bit because, well, a ladybird is tiny(!):

Lovely use of colour and bokeh here, and a cracking Lumia 950 shot. Never be afraid to use PureView zoom and/or cropping if it gets the job done - just don't go beyond the sensor limit. So 1.5x zoom on the 950 range and 3:1 on the 1020 (the latter's Lumia Camera doesn't let you anyway). Once you've done all you can in terms of zooming, if necessary, then it's time to crop down as needed - which is what happened here to great effect.

George lets it all hang out

Snapped on Dartmoor on the Lumia 950 XL:

A great shot of a moving subject here, and with level and majestic scenery in the background. The 950/XL do tend to take sharpening to the edge of what's acceptable, but they usually don't go over the 'line'.

Snapped (by me) on the Lumia 950, using manual focus to get as close as possible to this colony, sent into panic because I'd moved a paving stone which had been on top of it(!) I had to get the phone out and shoot very quickly, as they'd packed up completely within about 5 minutes: 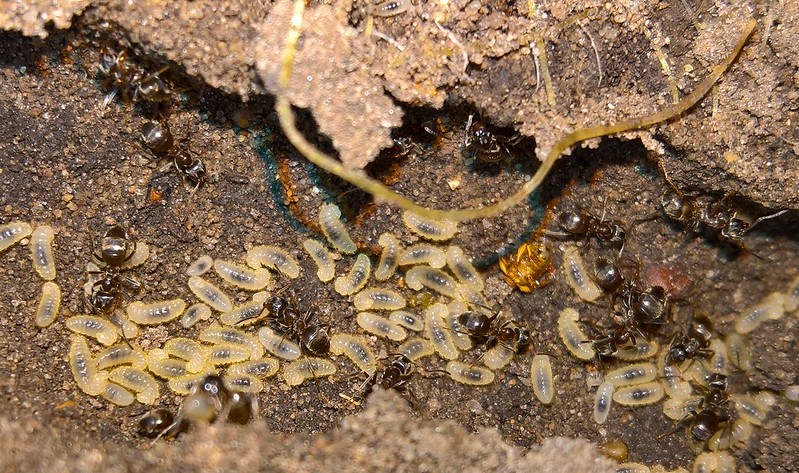 Nature's amazing, really, they carved out these cavities over months. And you can see all the baby ants in their cocoons (biology experts, feel free to correct me here!). Superb detail from the 950 here, I just had to crop the image slightly. I also forced the triple LED flash on, to illuminate what was going on (at speed) beneath me.

This was shot in 8MP oversampled mode and then cropped in slightly. Just look at the detail on the frog's face!

Snapped on a Lumia 1020 under tricky low light: 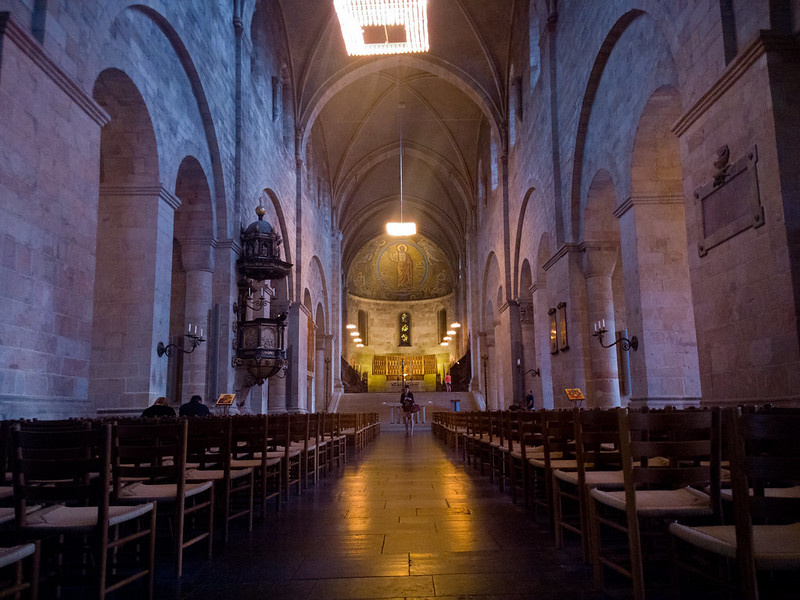 This was uploaded through Lightroom but looks pretty much as it did from the 1020, which was shooting in 5MP oversampled mode and then cropped to make it square. Terrific atmosphere from the 1020 and very little digital noise.

Shot on the Lumia 950 XL in 8MP oversampled mode in pitch dark conditions:

I love shots which are lit from within and this is a good example. Olivier must have set the exposure based on the brightest spot as this was on full automatic otherwise and the effect is stunning. Thanks to the sensor, the oversampling and the short shutter speed used, the blackness of the surroundings make for a great contrast to the hot embers.

A magical shot of Hogwarts

Another of mine, snapped at the Warner Bros lot, this huge model was very impressive and the lighting was perfect for a moody Lumia 950 XL shot in 8MP oversampled mode: 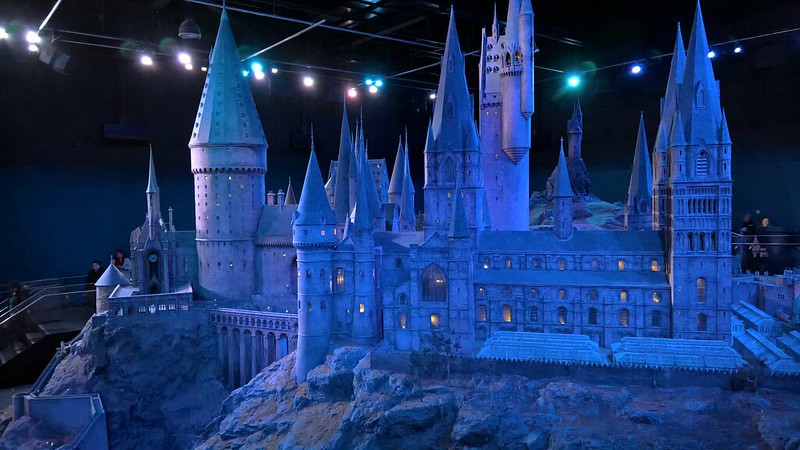 In fact, the oversampled image was only spoiled by me, in failing to frame the shot to include the tips of the spires! I think I was worried that the roof lights would show up too much - and ruin the overall illusion. But in hindsight, I should have stepped back 5m and got a wider angle all round. Ah well. I'll have to go back 8-)

This one caught my eye on Flickr. Snapped on the Lumia 1020: 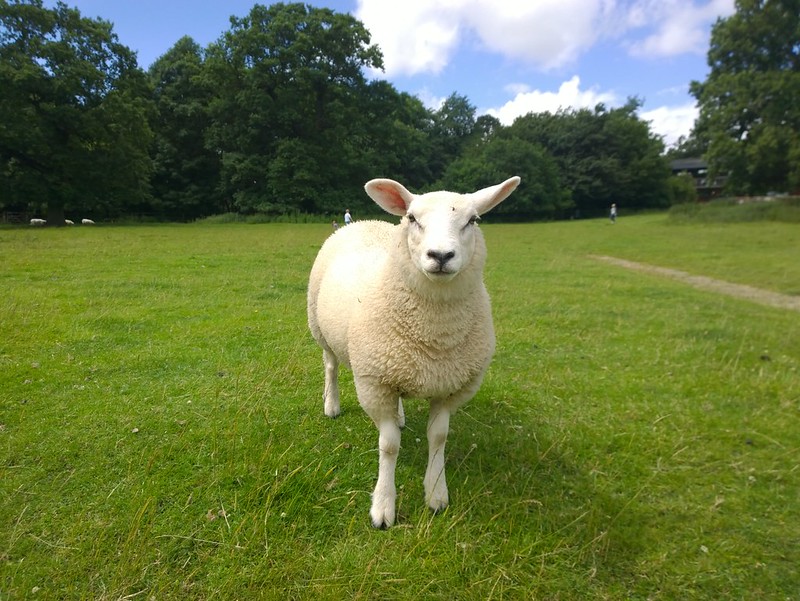 Shot in full 38MP, and with no zoom and no editing, it's as basic as it comes - but the thing with wildlife is that it's unpredictable and, especially with sheep, tends to run awau before you can snap it. Quite how the 1020 owner here managed to get this close to the sheep and with it looking straight at him, escapes me....! 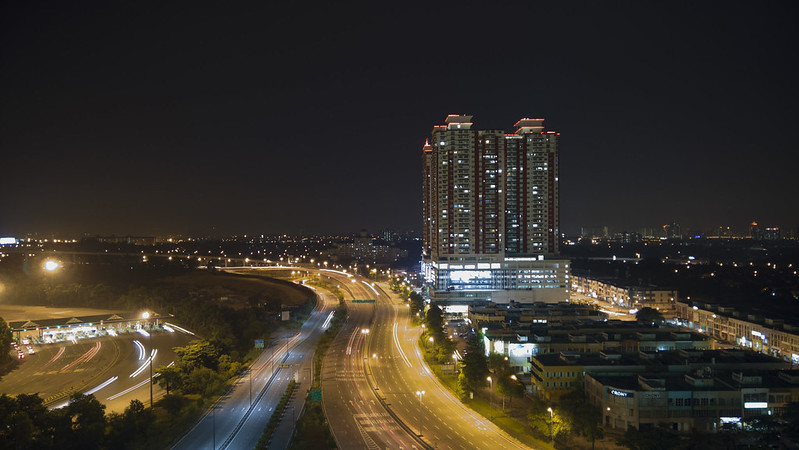 A little tweaking of this RAW image from the Lumia 950 and the result is a stunning night time long exposure, with super-crisp detail.

Rise of the water monster

By me (ahem - sorry!), snapped on the Lumia 1020 and using its Xenon flash to (almost) completely freeze water in broad daylight(!) Just an idea I had after a beer as I exited a country pub: 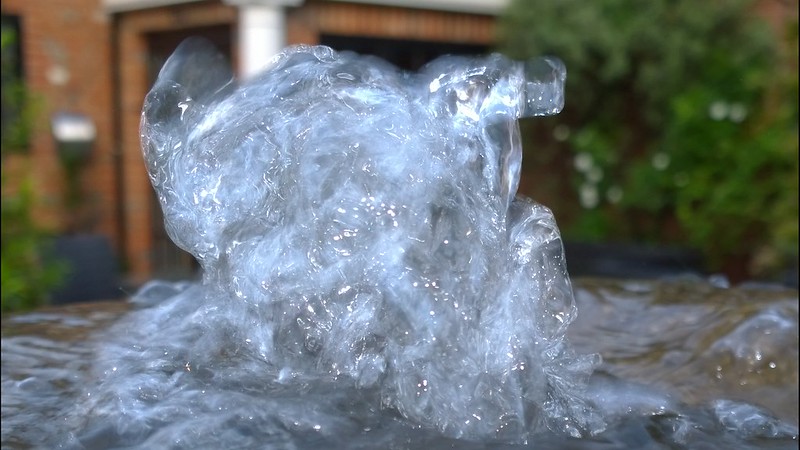 The water was bubbling up but was too blurry using a normal exposure. So I forced the Xenon flash on and got the shot above, which looks almost like ice or cellophane - and you have to remember that this is actually water. In fact, by playing with shorter exposures, I think I could have frozen the water even better. I'll have to revisit the pub!

Just to show that excellence isn't restricted to the newer Lumias, here's one snapped this year on the old Lumia 920: 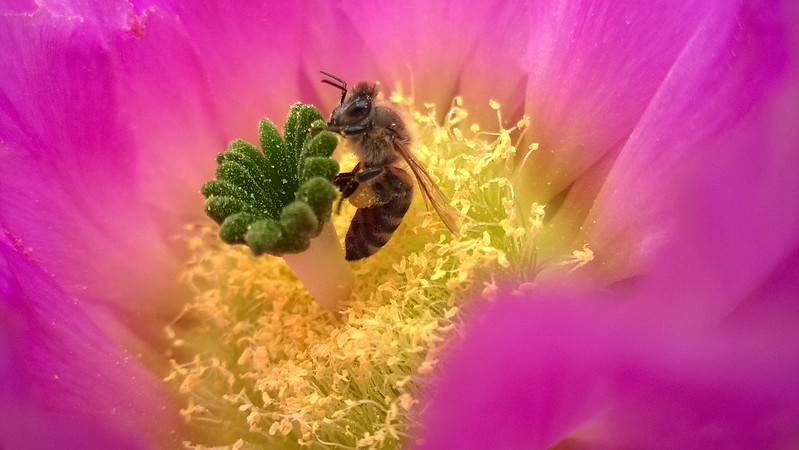 Wow. Although touched up for 'shadows' in Adobe Photoshop Express on the phone, this is apparently as the photo came out of Lumia Camera. Ahmed managed to get the 920 right up between two of the petals with terrific macro focus and bokeh effect, helped by the surreal pinks.

Finishing off by cheating a little, since this was taken at the end of last year and not in 2016, but still.... Snapped on the Lumia 1020:

Again, getting focus this perfect with a living, moving subject is just sterling work from Olivier (again). Look at the detail on the cat's face. This, surely, is easily DSLR quality. As indeed are several of the other shots above, I'm sure you will agree?

PS. Thanks to Richard Yates and his team for organising the Phones Show Chat Flickr group, which made finding some of these gems easier!

Filed: Home > Features > The best photos captured on Lumias in 2016?