New ideas in phone imaging don't come along very often, but Samsung hit on something three years ago, with 'Single Take', that's worth talking about. Most Galaxy phone users don't even know the mode is there, but Samsung is just starting to push the idea in marketing, begging the question whether this is the future of phone imaging or just another gimmick? For 'normobs', just maybe the former, for you and I (AAWP, AAM) probably the latter.

[Yes, this is Samsung only, but the concept here deserves wider discussion, so I'm cross-posting this on AAWP as well. Single Take is available on almost all mid-to-high end Samsung devices from the last four years. By the way, for anyone wondering what's happened to All About Mobile [AAM], it's slightly delayed.]

The idea, in a nutshell, is that when something is happening, a family event such as a birthday cake being brought in, a fun game, some pets doing daft things, a parade going past, that sort of thing, you can just point your phone at the action/general chaos in 'Single Take' mode and tap one button in the UI.

5 to 15 seconds or so later (depending on device and software version), the Samsung camera software will have captured video and photos, then shortly after that will have analysed the footage and stills, and come up with some suggested edits - best photos, slow motion snippets, and so on.

You'll get the idea from the embedded Samsung promo videos embedded below. So you might like to skip ahead and watch a few of these. It's pretty clever - the 'AI' system involved does a pretty good job of analysing when you stopped panning or perhaps when something dramatic happened, and subsequently opening up the Single Take item in Samsung's Gallery shows colour and monochrome 'arty' photos, plus short video clips.

The concept of not having to think "Something's happening, quick, do I shoot a video or some stills?", not having to decide, is nice in principle, especially for the casual phone user who isn't experienced or tech-literate, but in practice I think the system is flawed for anyone who knows (or even thinks they know) how get the most from their camera phone.

You'll have spotted that the promo videos almost exclusively show artificial situations, designed to show off the Single Take system. Back in the real world, application is somewhat limited, I contend. You see, if you trust yourself to have a steady-ish hand and just shoot 4K video of the scene, then you can chop this up later as needed, including grabbing 8MP stills. Or if you fancy you're framing and timing is good enough, you can just shoot the photos you really wanted. 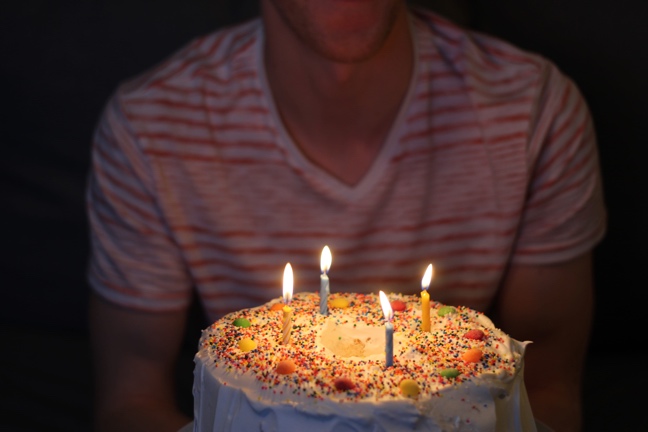 The classic real world example might be a family member bringing in a birthday cake with lighted candles, for the guest to blow them out. This should be right up Single Take's alley, but you've got to be careful. For starters, the process, including singing 'Happy Birthday', will take well over 30 seconds, perhaps even a minute, in which case even on the latest S21 series, Single Take won't be long enough and you'd have to spot the end of capture and restart it. And then restart it again. And again. So, better surely just to capture the whole sequence in one seamless 4K video and then worry about everything else later?

The Samsung Single Take system is geared towards slightly artificial and predictable (short) action sequences - I've tried in a number of real situations and have usually been a little underwhelmed. Yes, it saves time working your way through 4K video and using software to extract frames or short video effects, but in my tests if I'd wanted high quality stills of the event than I'd have gotten better results by thinking about what I wanted and framing and timing stills properly. And if the video produced by Single Take is one of the main attractions, then how is it better than just shooting the event with 4K video in the first place?

Even when you haven't got action with people, Samsung tries to persuade buyers that Single Take is worth using, with promo screenshots like this: 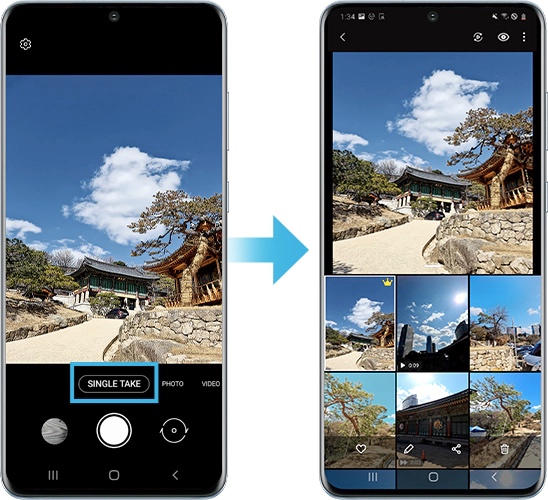 But hang on. When faced with a landscape or scene like this, unchanging and static, and with steady lighting, why on earth would you trust the AI to know what you wanted to photograph or video? Surely you've got plenty of time to do traditional stills and video, exactly as you (the 'director') intended, rather than the Single Take 'shoot and hope'?

Sorry to sound down on what should have been an innovative new concept. I could be wrong. Which is why data points and comments are welcome below from the community. Have you used Single Take on a Samsung smartphone, and if so then how did you find the results?

I'm happy to have Single Take - in my case on my trusty Galaxy S9+, but I find that I rarely use it. Real life simply doesn't present itself in semi-predictable yet also action packed 5 or 15 second chunks. Sorry, Samsung. It's a cool new shooting mode and a nice-to-have, it 'demos' well (as in the videos below), but it's not that compatible with what most of us shoot on our phones in daily life.