Rowi, one of the most popular third party Twitter clients for Windows Phone, has been updated to version 2.4. The new version has greatly improved push notification support and now offers an option to receieve tweets instantly by using Twitter's streaming API. Other updates include suupport for expanded URLs to be shown in list of tweets, higher resolution images, the use of user profile banner images, and Favstar.fm integration.

The improved push notification support is the stand out feature of the new release. Hidden Pineapple, Rowi's developers, have created a new Windows Phone push notification service in the cloud that receives new tweets on your behalf and sends notifications and Live Tile updates according to the settings you specify in the app.

Rowi's settings allow both granular (on/off) and fine controls (specifying what things should be notified) over notifications for both Live Tile and Toast notifications. The app also now allows you to set notifications to arrive for all configured accounts (previously just the default account). It's also now possible to pin Rowi's mention and message pivots separately (and for multiple accounts) to your start screen and have their counts updated individually (i.e. allowing more flexible start screen notification options). In addition, on Windows Phone 8, Rowi now supports integration with the lockscreen with options for both quick status (icon) and detailed status (text below the time/date). 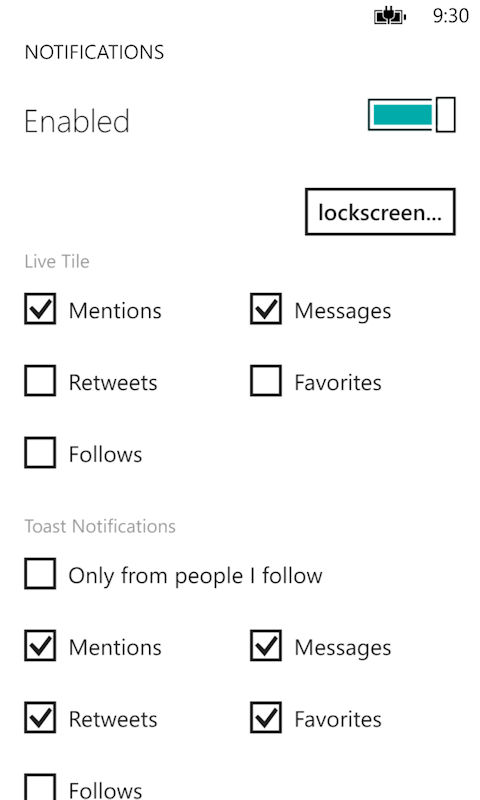 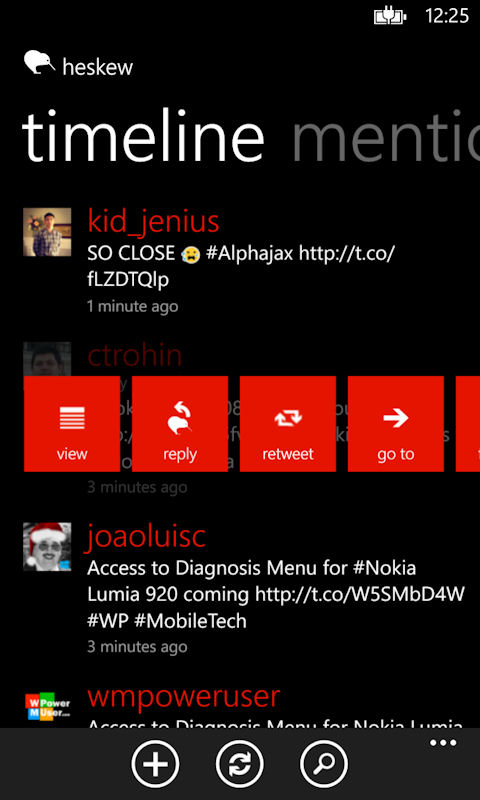 The new version of Rowi uses the new Twitter 1.1 API, something that Twitter will shortly require of most third party Twitter apps. The new API has some additional restrictions that impact on consumers, most notably around rate limits. Previously Twitter apps could make up to 350 calls to Twitter per hour, with the new API limits are 15 calls of each type (e.g. timeline, mentions, user details) every 15 minutes. For some users, depending on the way you use Twitter, this may mean you run up against rate limits more frequently. However, Twitter is encouraging app developers to switch to the streaming API, which has fewer restrictions.

Rowi continues to support the old method of receiving Tweets, which will load new tweets, mentions, and messages when you first load, or switch back to the app, but, like other Twitter clients, requires you the press a refresh button when staying within the app in order to receive new tweets. However, the new version, by default, uses Twitter's streaming API. This means that tweets from your home timeline, mentions and direct message will arrive instantly, appearing inside Rowi as they are posted to Twitter. This method does use a bit more battery because it is holding open a connection to Twitter while Rowi is open, but you do get your tweets quicker, and there's always to option to switch back to old style in the apps' settings.

A comprehensive post, written by Rowi's developers, on the change, the details behind them, and some extra app behaviours related to them is available in this blog post on The Hidden Pineapple Blog.

Rowi is an easy to use Twitter app for Windows Phone with a clean and simple interface.

Whether you are a serious Twitter user or a beginner, this is the app for you! Instead of focusing on a big list of features, we built Rowi with the overall experience in mind. You’ll find Rowi has a simple, streamlined, easy to use Metro interface that feels like it’s part of Windows Phone. It performs better than any other Twitter app today.