Podcast Lounge has been keeping its position at the top of the 'podcatcher' genre in the Windows Phone Store by virtue of rock solid reliability, evidenced by the pace of development reported on below. Version 2.1.0 not only fixes a mountain of detailed (and sometimes obscure) tech issues, it also adds a much-requested feature: Sleep Timer.

The official changelog for this, v2.1, from the v2.0 we reported on here only a month ago, and the v2.0.1 I included in my podcatching app roundup, is extensive (I've omitted a few of the tech-ier items too, for the sake of simplicity!):

As, I say, in addition to the above, there were a mountain of other bug-fixes too complicated for us lesser mortals to understand. Suffice it to say that Podcast Lounge is now even more bomb-proof! 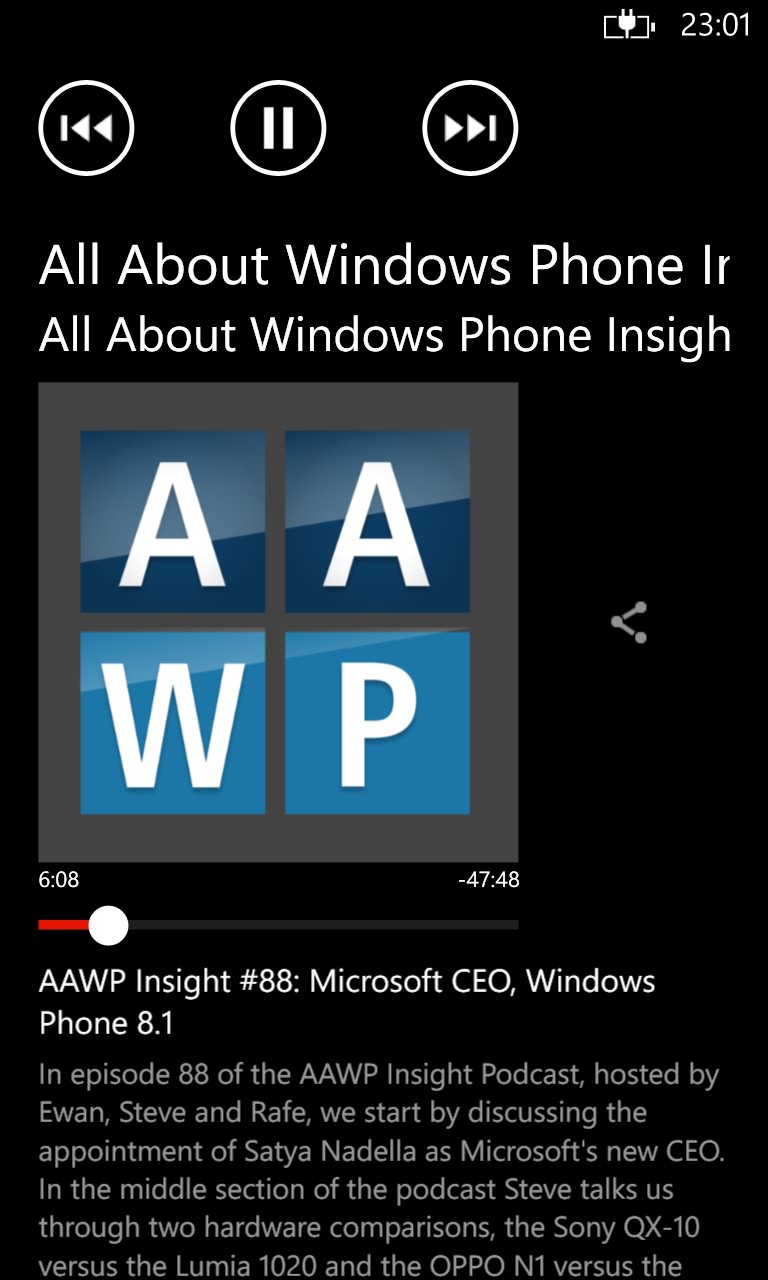 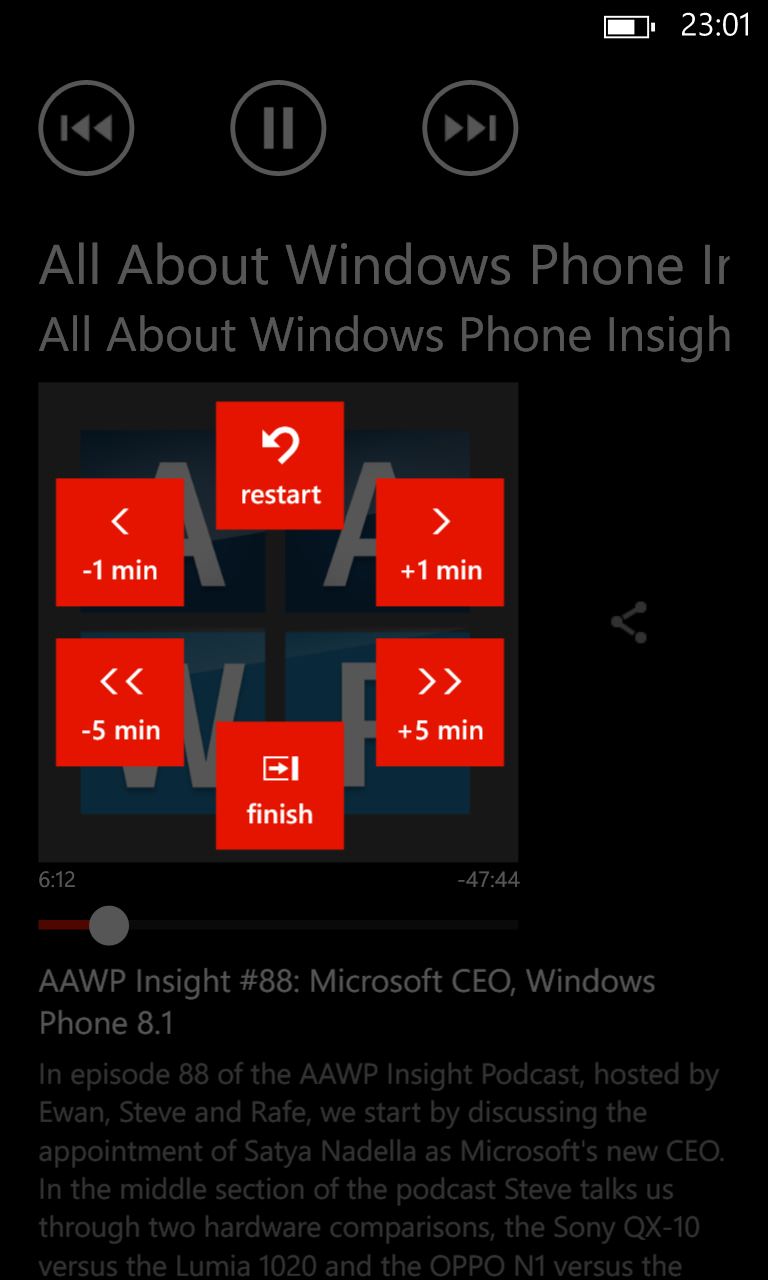 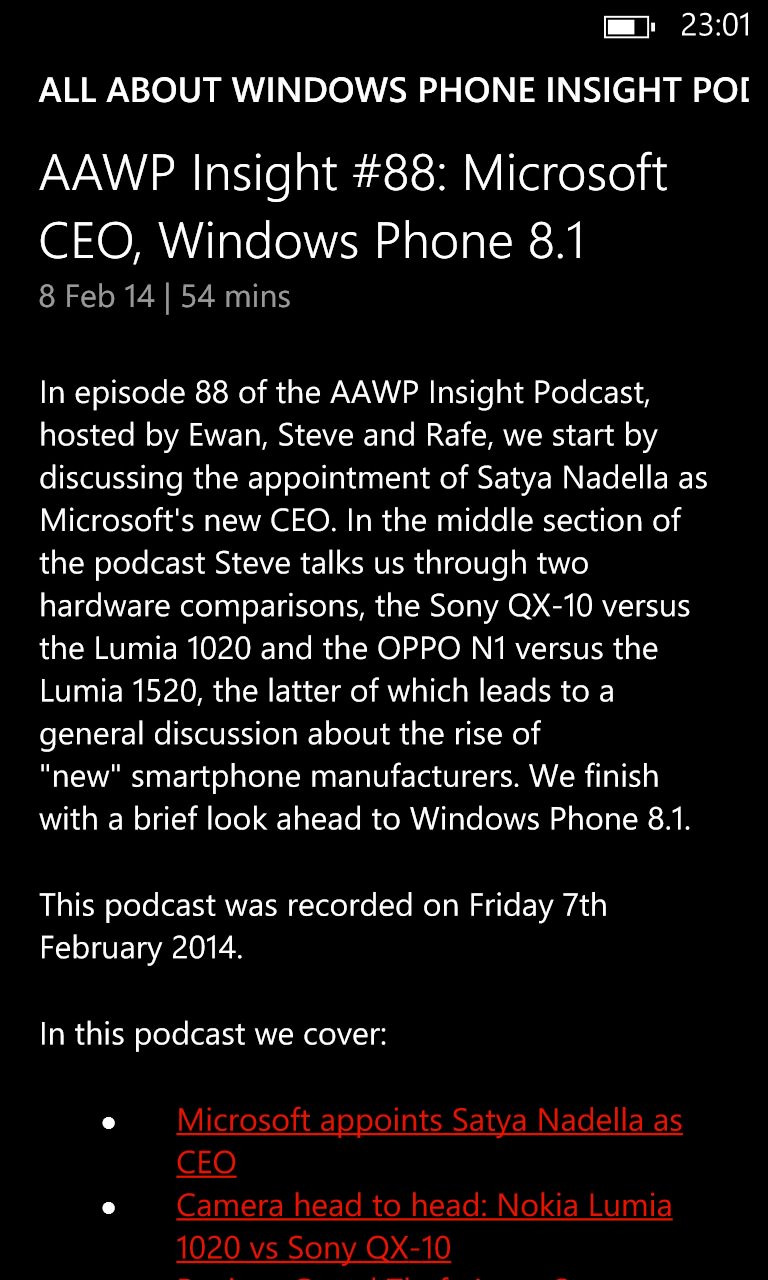 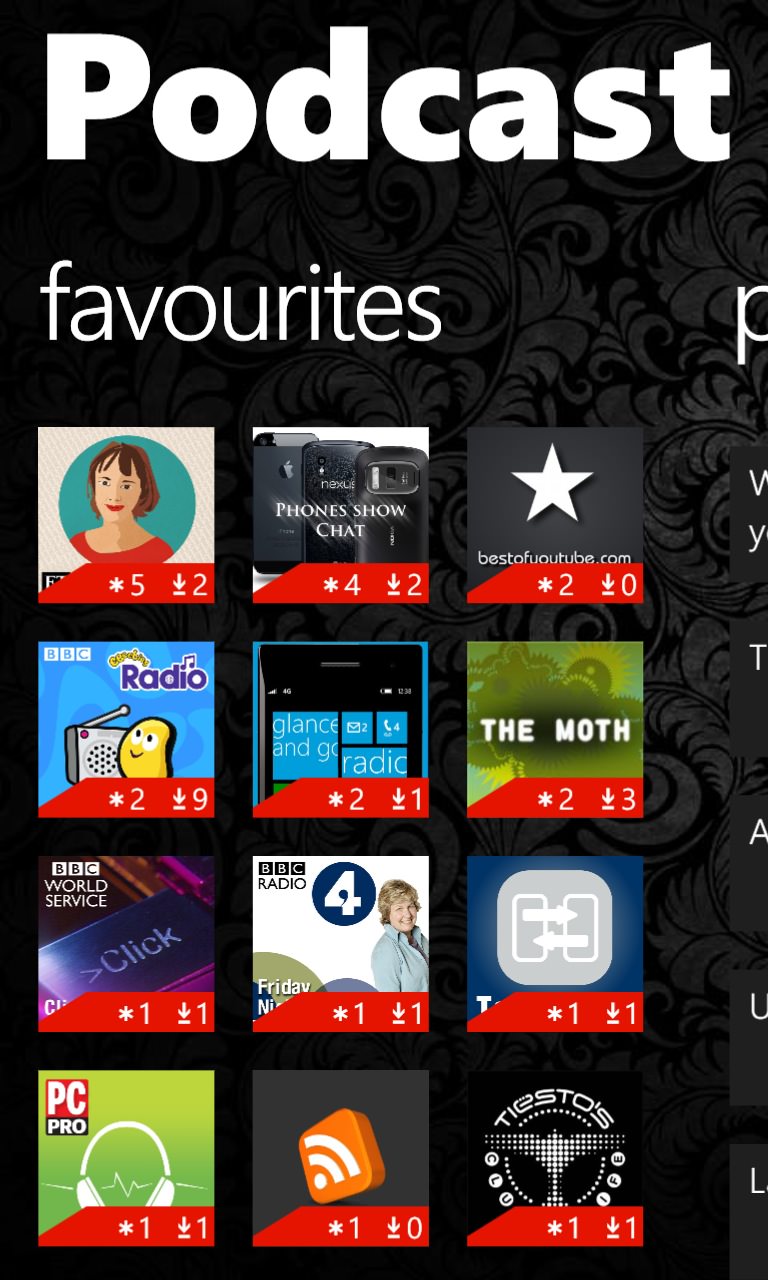 The new Sleep Timer is found in the 'Tools' section of the UI: 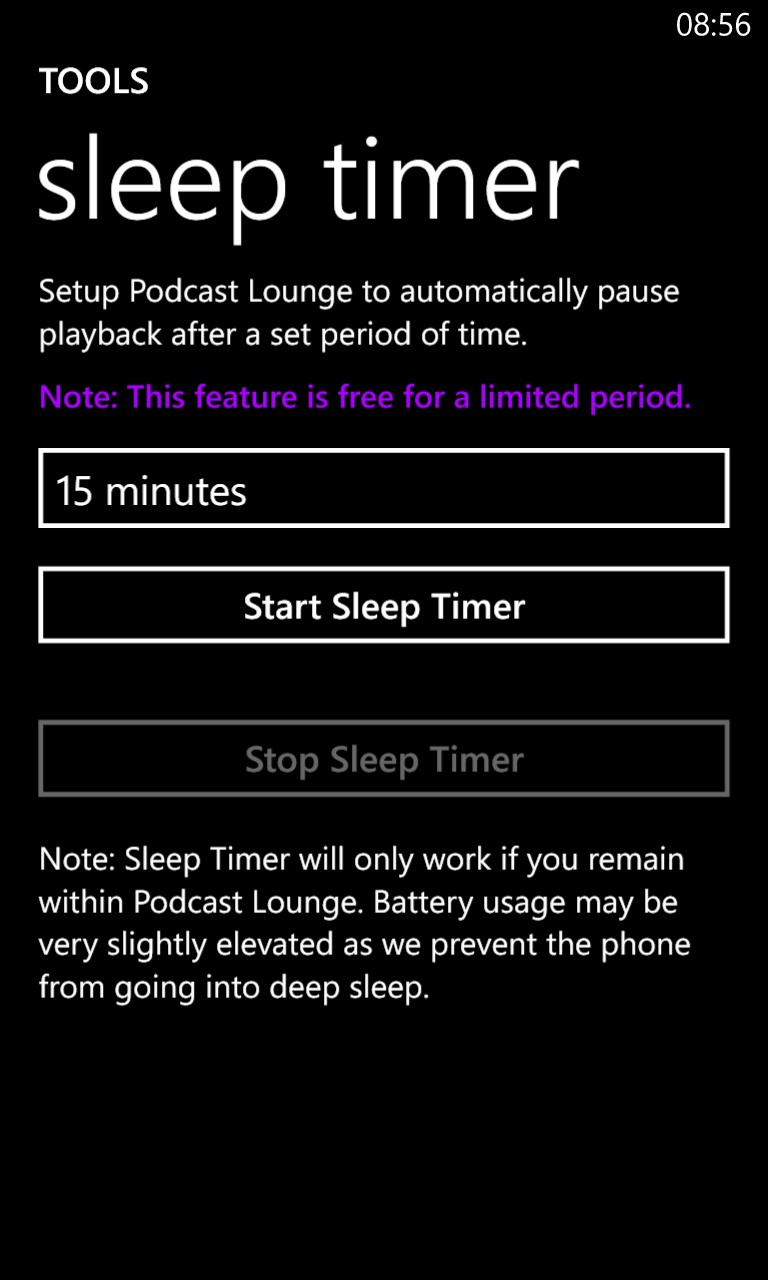 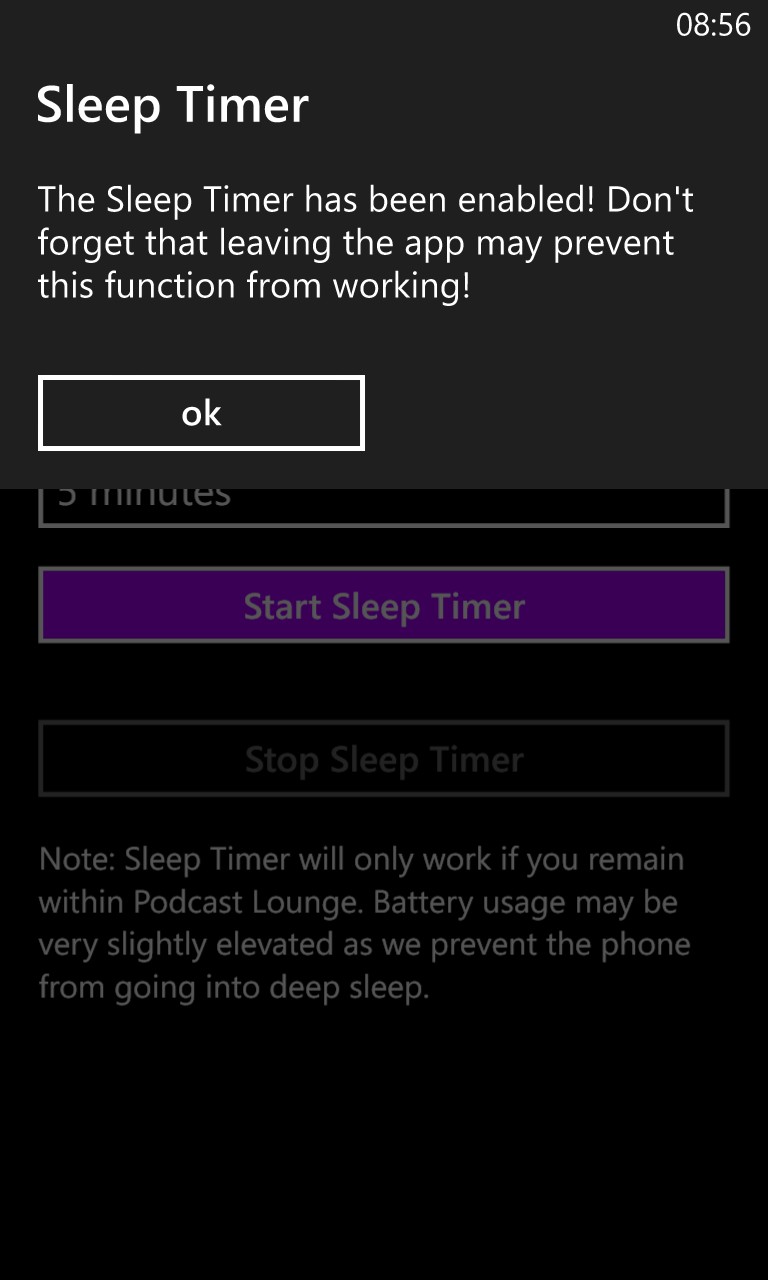 Notably, the Sleep Timer only works if Podcast Lounge is left in the foreground (the screen can turn off, but you can't start something else, etc.), but this is understandable and quite acceptable.

Interestingly, the Sleep Timer feature seems to be touted as something which my be an in-app purchase at some point in the future. Presumably once it's been tested more extensively, not least under Windows Phone 8.1. Having a 'toast' confirm the ending of the sleep period seems somewhat pointless, mind you, since the idea is that a) the screen would be off by this point and b) you'd be asleep anyway (hopefully)!

Podcast Lounge remains top of the heap - just, and the one I recommend and turn to most often. From my recent round-up update:

Podcast Lounge (covered in part 1 of this round-up feature) is still the overall recommendation here, it's simply more polished and feature complete than anything else here. However, the likes of BringCast and Podcast Critter are both snapping at its heels and I wouldn't rule out a change of winner at some point. In the next tier we have Podcast Picker, P | Cast andCarboncast - any of which I'd also be pretty happy using most of the time. The podcatching market has certainly matured nicely on Windows Phone.

Note that there's one 'bug' which turns out to affect ALL podcatchers. It's a bug in Windows Phone itself and concerns playback volume - see here for my write-up.

You can grab Podcast Lounge from the Windows Phone Store here. Version 2.1.0 is now live and available.