You've got to love market research - at least, it beats guessing everything from personal experience(!) In this case, the folks at Kantar World Panel, asking new smartphone buyers about their experience and what they wanted from a device. Now, take a lot of the Apple/Samsung/Nokia data with a pinch of salt, because the study was in the USA, with its completely skewed heavy-contract-centric nature, but the general 'wants' and 'desires' of the public should be more generally applicable. Below, I reproduce the two main charts of interest from the PDF report.

You can download the PDF report yourself here. Here's what people look for (apparently) in terms of functionality in a smartphone: 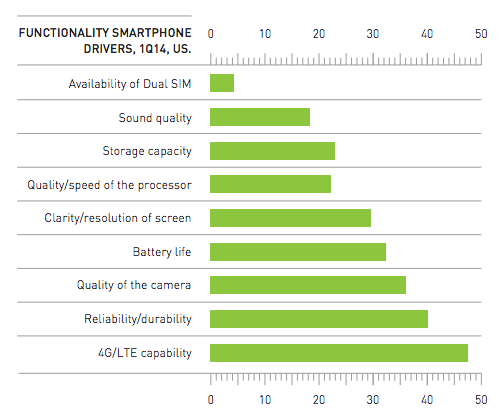 The biggest surprise is the preference expressed for 4G/LTE. Possibly reflecting the exact markets that the Kantar team did its research (in rural UK, for example, 4G wouldn't even be considered!) It's good to see the focus on the big four though - reliability, imaging, battery life and screen clarity and quality, all aspects most of us also prize. Even over processor speed, something which is rightly relegated here, since performance in most current smartphones is OS/UI-limited/dependent.

The relatively poor showing for 'storage capacity' reflects the continuing trend towards streaming (rather than stored) media, though again I suspect that this would have been placed higher if the interviewees had been in a less connected area of the country.

In a companion chart, here's what people look for in terms of a smartphone's design (i.e. cosmetics, form): 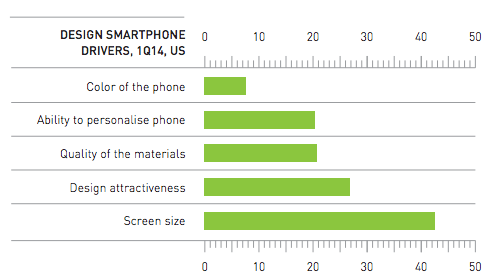 No surprise over the main factor - screen size dictates overall device size and is a very subjective/personal decision, of course. A bigger surprise, at least in this USA-centric survey, was that color (sic) was considered relatively unimportant. Interesting, given Nokia's focus on introducing wacky colours to its latter day Symbian devices and then Windows Phones. I'd agree, colour is perhaps least important to me too - I've learned to live with the bright yellow of my Lumia 1020 and white Nokia 808, but in each case they were simply colours I'd 'ended up with'!

Comments? Do you wildly disagree with any of Kantar's survey findings?