Screens and resolutions through the ages

This is the sort of feature I often create, but GSM Arena has done such a good job that I'll just link to them instead. They look at screen resolutions and sizes over the last decade - the trend is obvious, but it's always surprising just how far we've come.

Of course, along side the increases are wholesale additions to what we use smartphones for. 'Smart' in 2007 meant Web browsing, email, music, photo sharing, etc. 'Smart' in 2017 includes paying for things, media streaming, live social activities, HD gaming, and more.

Anyway, from the article:

“The [2.8”] display truly looks larger than you might guess. The QVGA resolution stays the same and is adequate for providing great picture quality… “. It may seem like this statement is from another century, but it's just under 10 years old - from our very own Nokia N95 8GB review. And you can kinda see where we were coming from - the average screen in 2007 was 2.3" in diagonal and had less than 84,582 pixels at 171ppi density.

And it got us curious so we decided to dig through our database and see how screens evolved through the years. We picked the 50 most popular phones for each year to analyze - those account for the vast majority of all sales and that way we avoid exotic devices skewing our stats. 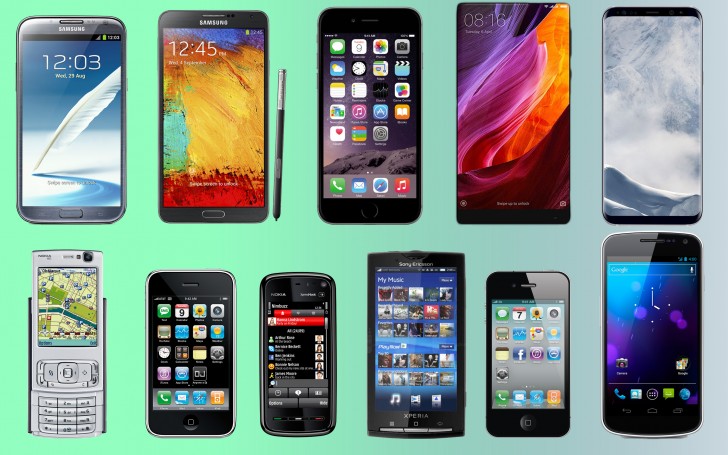 We chose 2007 as a starting point, the year Apple revolutionized the smartphone market by releasing its first iPhone. Back then the iPhone's 3.5-inch screen was considered huge and its HVGA resolution was close to the highest available - only devices like Nokia E90 and N800 had more pixels.

The touchscreen revolution then quickly took over the mobile world and screens and resolutions started growing rapidly. In 2010 a couple of key launches happened and they sped up the process rapidly - Apple debuted the iPhone 4 with its Retina screen, while Samsung introduced the Galaxy S - a 4" WVGA flagship.

The following year Samsung released the first Galaxy Note, which had a huge 5.3-inch screen of over 1 million pixels. At that point the 3.5" iPhone was already below average in size, but the Note got more ridicule for its size than praise.

As phablets' popularity grew exponentially average screen size moved from 3.6" in 2011 to 5" in 2014. Even Apple couldn't resist joining the size race as the 4.7" iPhone 6 and 5.5" iPhone 6 Plus came to be. Resolution was growing even faster - by the end of the period Retina screens were only average in terms of pixel density.

In 2015 Android flagships moved to QHD and we saw another huge spike in ppi. Sizes kept increasing as well and the average screen stood at 5.2 inches.

And then everything changed when the mid-rangers attacked. Okay that might be an overstatement, but in 2016 mid-range handsets finally became good enough and they shot up in popularity, which explains the dip in the average resolution that year.

There's more, including charts and tables, in the source article here.

The fashion in 2017 seems to be near bezel-less phones, made possible by virtual controls now being supported by most OS - we're getting ever closer to those Star Trek slabs of glass. Still, it's good to look back and I reckon that I've (mostly) owned or (in one or two cases just) reviewed all the handsets shown above. Heck, some are classics and they remain in my 'museum'!

PS. Good to see the Nokia E90 and N800 get a mention, forgotten form factors and interfaces...

Filed: Home > Flow > Screens and resolutions through the ages