How to: implement 'Windows Phone Now', the 2014 edition

You may remember, exactly a year ago, I looked at ways to create something of a contextual 'Google Now' experience using the Windows Phone 8 Start screen? Although not really adding much new ground for 2014 (and with Cortana not having hit the UK yet), I thought it would be appropriate to revisit the concept, at least, on Windows Phone 8.1, with more live tiles per screen? See below for my set-up, and comments welcome if you can improve it!

From the earlier article:

One of the key benefits of Google Now for Android is that it offers contextual information about you, where you are and where you've got to get to. OK, there's extra movie, and sport and flight stuff too, but that's all handled in Windows Phone with live tiles for the specific applications. What I wanted to show here though, was setting up a core of your Start screen to show much the same information as Android's famous Google Now system.

Google Now is developing all the time as Google gets it to dig ever deeper into your email and Calendar, but the core ideas/cards are ones that it is easy to get close to on Windows Phone with minimal effort:

Google Now on Android covered the above with aplomb, though often confused users by having the widget appear to change size, depending on how much information there was to display at any one time. Apologies if you can already see where I'm going with this, but Windows Phone is also set up nicely to handle the same information, out of the box. Specifically on the Nokia Lumia devices, which is where the cropped demo screenshot below comes from.

In fact, I've added a few extra tweaks since that article was written, helped by the flexibility to use more tiles (and of a wider range of sizes), under Windows Phone 8.1, and here on a larger screen (the 6" screened Lumia 1520).

Here's the end product, I'll include some commentary below: 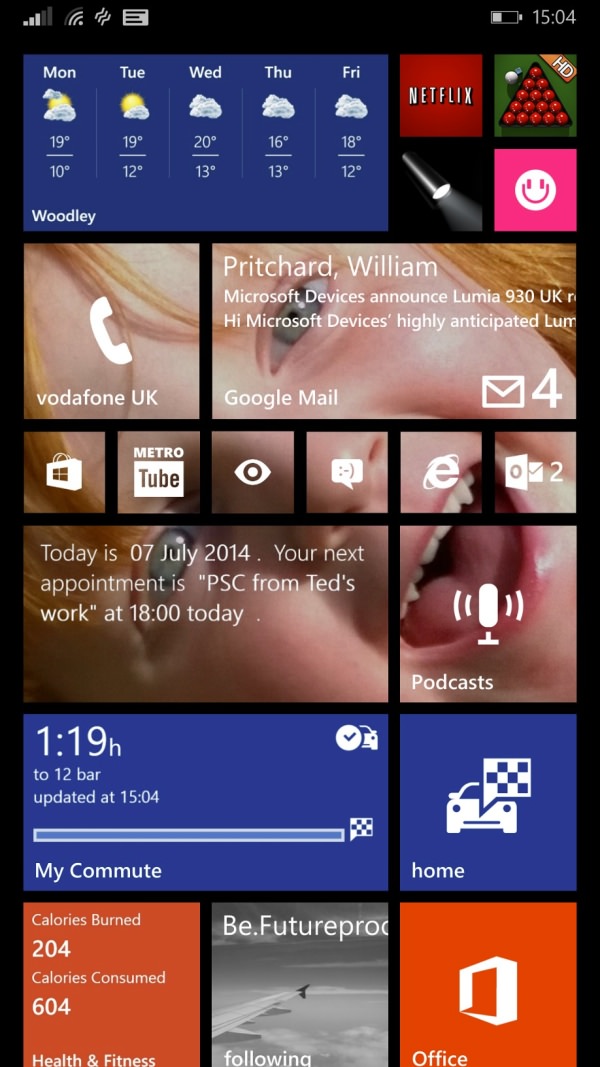 Some notes, from top to bottom:

It's a fair cop that what I've ended up with isn't really anything like Google Now. It's something different, with pros and cons to each system. Under Windows Phone 8.1, Microsoft wants to show you things of interest to you all the time, even if they haven't changed since the last time you looked, whereas Google's Android system works much more on a 'here's something new, please look at it and then swipe it away' basis.

Also notable is that Google Now works well to intercept and integrate packages and flights, all gleaned from your Gmail. Package and flight trackers are available, with live tiles, for Windows Phone though, so could be added here if needed.

Comments welcome on how you get on with Windows Phone 8.1's Start screen. What tricks have I missed? Any other live tiles of interest to our readership?