With updates to Windows 10 Mobile's Photos and Lumia Creative Studio in the last week, with an update to Camera hotly expected for this week, and with Photos Add-ins appearing yesterday, it seems as if Microsoft's imaging strategy is coming together. But is it better than what came before it, back in the 'good old days' of Windows Phone 8.1? It's certainly much, much simpler - and I wanted to show this pictorially, so see the flow chart below. The mess and confusion from 8.1 was partly because it used some Microsoft apps and code, and some Nokia - with Windows 10 Mobile and Nokia no more (as is), everything's now under one roof, and it shows.

I should note a few things. Firstly, I'm a novice at making these charts, so please excuse the plain nature and any cosmetic deficiences(!)

Secondly, the exact flow will depend to a degree on what smartphone is being talked about, its imaging capabilities, and the version of Windows Phone being used (e.g. Update 1, Update 2). But the point being made graphically below is how much simpler the 'new' scheme is under Windows 10 Mobile. 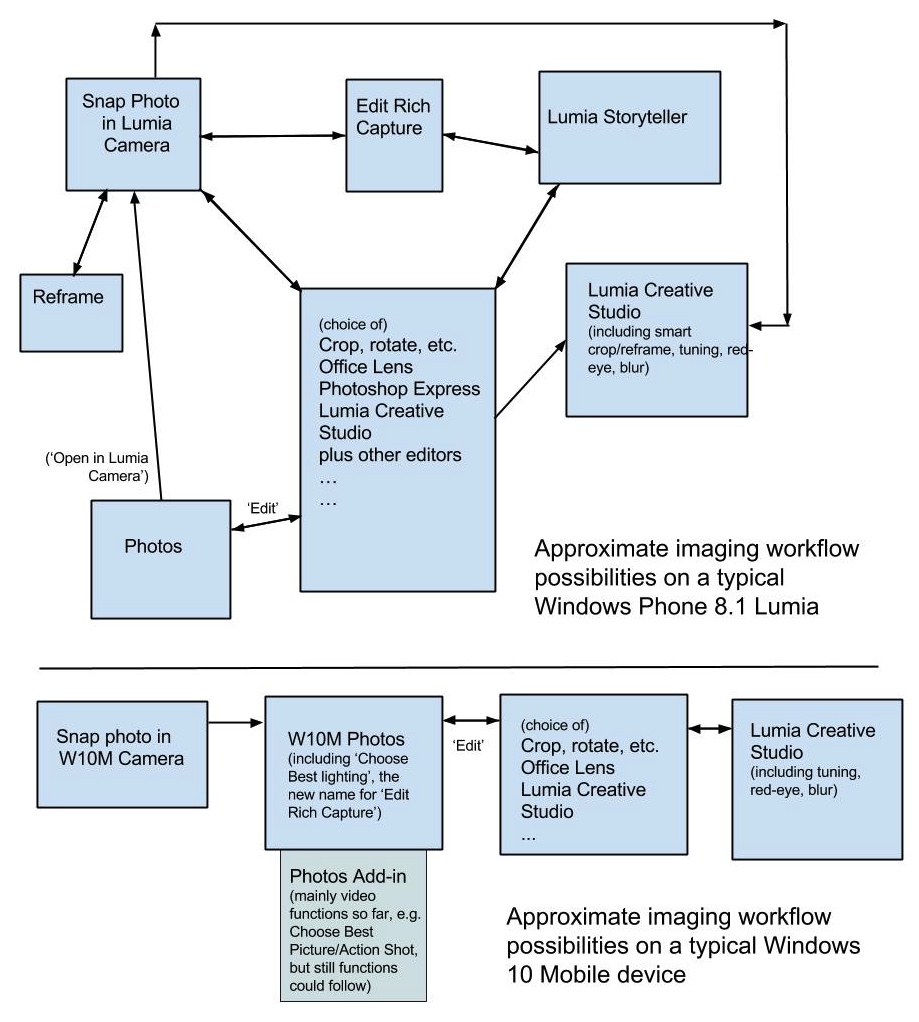 The latter schema shouldn't be surprising, of course. The system under 8.1 was a complete mess because it was designed by different teams at different times under different companies, and bits got bolted on as and when needed. As with many aspects of the OS, Windows 10 Mobile is an opportunity to bring back total control of the workflow under one roof, in one company, and it shows.

So Camera has been upgraded to include most of the features of the old Lumia Camera (a few are left to appear over the next few weeks), while Photos is a complete rewrite and nothing to do with 8.1's Photos. The new application can be called as needed from other applications, including Camera, which helps avoid any duplication in functionality between these two apps.

The exact list of 'editing' applications is still in flux, of course, and may include some older apps.

Rich Capture seems to be a staple of Camera now, and it works well on most phones above the Lumia 640 in specification, though I'm not mad on the 'Choose Best Lighting' rename for the editing function for this. The underlying file structure for Rich Capture shots won't have changed, see here for another flow chart from me to explain how these editable HDR functions work, though note that the exact workflow will have been simplified by the moving of all the HDR editing functions into the new Photos application.

The eagle eyed will have noticed that 'reframing', effectively 'smart cropping' into an underlying higher resolution image, is missing in the new way of things, also helping simplify the workflow. I've mentioned several times that few 'normal' users ever really understood the PureView reframing concept, clever though it was and is. Now, on the Lumia 930, 1520 and Icon, the 20MP camera produces images at 16MP in 16:9 aspect ratio, which has ended up - in 2015 - roughly equivalent to the high resolution images produced by the Android flagships.

So you could argue that you might as well ditch the 'complicated' oversampling idea for these phones and simply capture at this full resolution. In fact, there's the choice, since Windows 10 Mobile's Camera gives a selection between 16MP, 5MP (oversampled) and '5MP (oversampled) plus 16MP DNG (RAW)'. Which, aside from not being able to do the 'reframe later' trick on the phone, provides an option that should keep almost everyone happy. Novices will use the full resolution because they don't know any better, purists will go for the middle option because there's a lot less digital noise, while photo geeks will opt to have that, plus DNG (RAW) too, so that they can fiddle with photos later, on the desktop.

On non-PureView devices, i.e. those which output at a certain resolution (e.g. 8MP, 13MP) none of this is an issue, of course. 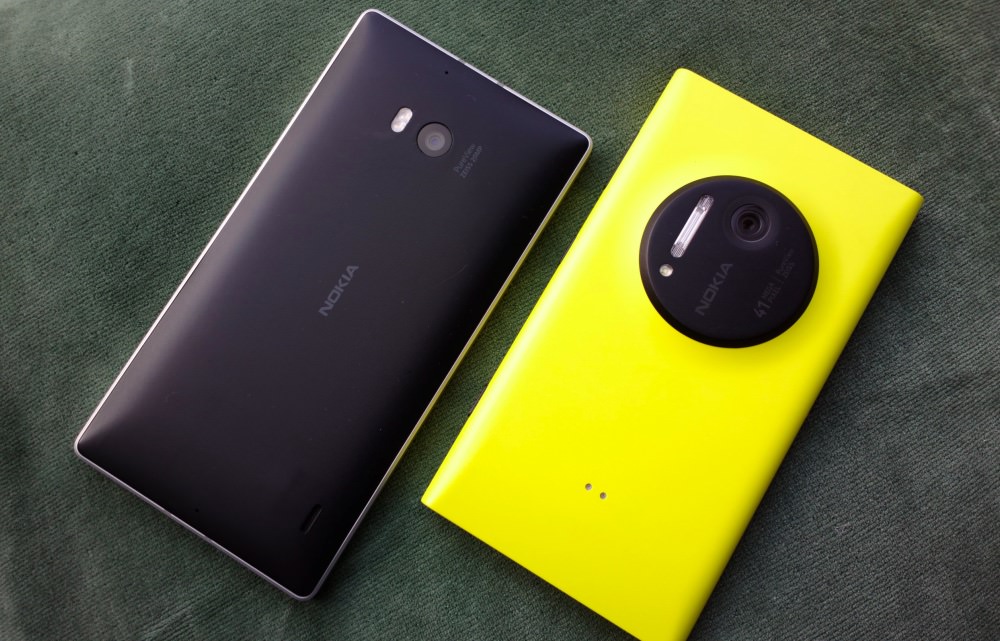 However, run Windows 10 Mobile  on the Lumia 1020, the Windows Phone camera champion, and you'll notice an oddity - the Settings dialog offers no choice of resolution whatsoever. It's unlikely that Microsoft's programmers (with the old Nokia team onboard) would simply leave this device capturing only at an unusable 34/38MP, so it's possible that we'll see an update to the Camera application that will light up detection for the 1020 and provide a choice of resolutions again. Given that there's no real 'reframing' facility in the new workflow above, I'd like to see a choice similar to that on the 930's. i.e. '34MP' or '5MP oversampled' or '5MP oversampled plus DNG (RAW)'.

Update: we've now gathered from Microsoft that the 1020 will (uniquely) stay with 'Lumia Camera' as the official/preferred application, though it will need modifying slightly to work with Windows 10's general applications and workflow above. Microsoft is err.... working on it! Watch this space for more news and hands-on experience.

Is the loss of 'reframing later' a huge deal? It's certainly a shame, though remember that the huge PureView zoom will still work - thus if you're planning to shoot something in the distance, zoom in at capture time rather than later. Hey, quality will be higher anyway.

Overall though, I'm impressed by Microsoft's reworking, for Windows 10 Mobile, of the confusing mess that was imaging on Windows Phone 8.1 into something simpler and yet with almost all the same functionality overall.

I should finish by saying that there's a certain degree of guesswork in all of the above - your comments welcome if you can contribute to the topic!