With imaging being at the heart of many Lumia smartphones, it was important to sort out the mess that was the imaging workflow under Windows Phone 8.1. Rather than a brace of camera applications, we now have just one*, now 98% complete**, plus we have a unified Windows 10 Photos store, available on phone, tablet/hybrids/desktops/laptops, essentially wherever you're signed in to your Microsoft account. Add in OneDrive, to link them all together, and you should have photographic nirvana. Well, not quite. This is Microsoft, after all, and I've got a few questions...

Here's the basic workflow then:

So far so good, but where exactly are the photos stored online?

If you head into OneDrive on the web or using a client, you can see that your photos are backed up to the 'SkyDrive camera roll', a naming convention that obviously goes back to the earliest days of Microsoft's cloud intentions and which (presumably) would break too many things if renamed now. However, look in Settings in Photos under Windows 10 on the desktop/tablet and you'll see that photos are sourced from 'Pictures'. And, indeed, there IS a 'Pictures' folder in your OneDrive, and if you upload something to this manually then this image also appears in Photos. 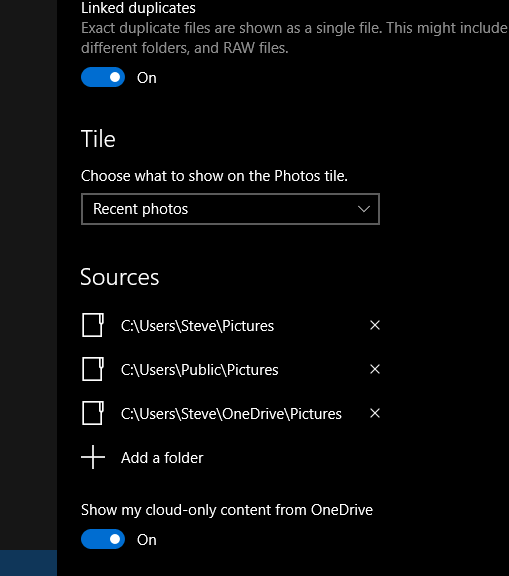 It appears that the link through to the 'SkyDrive camera roll' folder is completely invisible, i.e. it's not mentioned because it's automatic (and presumably because Microsoft also reserves the right to add 'OneDrive camera roll' at some point in the future). This is more than a little misleading and I'd like to see this folder shown in Settings, even if the checkbox to change it is greyed out.

Why is there sometimes a delay between taking a photo and it appearing in Photos on other devices?

I have no idea. Taking test photos on several devices and then watching Photos on each AND on the web AND in Photos on a Windows 10 PC, there were huge delays, ranging from a few minutes to err... never, in terms of images making their existence known through Microsoft's servers. There are still issues in terms of OneDrive's uploading behaviour, so watch for updates to that, but there's presumably also some kind of caching or checking going on (malware? porn? Who knows?) but the nirvana shown in the promos where a happy, smiling user takes photos of his family, sits down immediately at his or her desktop and there's everything all ready in Windows 10 Photos, for printing or editing, is some way off, at least in my tests.

Do photo backups count against your OneDrive allowance?

You bet they do. Sadly, in light of the recent news about Microsoft's intentions to severely cut down on the space allowed per user (at least, for free, going down to as little as 5GB). I've amassed around 30GB of photos and videos, even with curation as I go along, over the last five years. 95% of this is in the aforementioned SkyDrive camera roll folder. So as and when my bonus space expires, if I don't currently have an Office 365 subscription then I'm stuffed.

I'm sure many users are in this situation. Google does this right, by the way, offering to store backed up photos for free forever as long as you let Google do a little intelligent compression and reduction of larger images (see graphic below, on Android). This is a perfect balance and I can't see why Microsoft doesn't just issue a statement along the lines of 'JPG photos in your camera roll folders are exempt and won't be counted against your allowance'. It would be a trivial change at Microsoft's end, the restriction to JPG files would stop people abusing the facility and everyone would be happy. 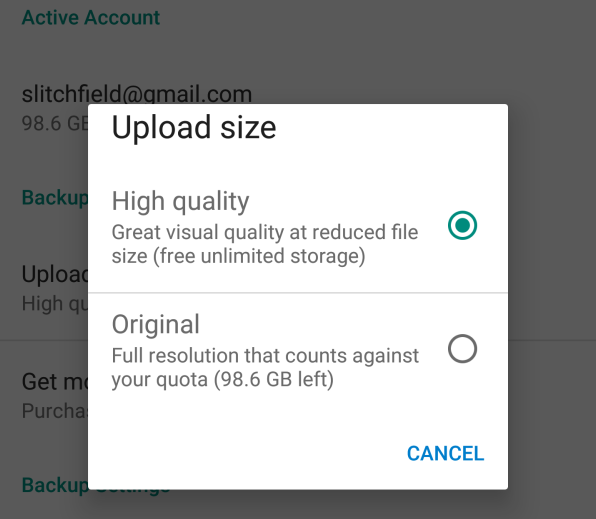 Microsoft, are you listening? And, along the same lines:

At what resolution are my backed up photos stored?

Against my original advice, back in the day, OneDrive goes for the highest resolution version JPG available (i.e. DNG/RAW files are ignored). So, in the case where you have a Lumia 1020 producing a beautifully compact, oversampled, 'pure' 5MP photo, the one that gets backed up is the higher resolution, i.e. 34MP, using up far more space online, using up more bandwidth, all for an inferior result. In my opinion.

Thankfully, the move to 'flatter' resolutions in Windows 10 (Mobile) Camera means that what you see on the phone is what gets backed up. So, on a Lumia 930 or 1520, for example, running Windows 10 Mobile, if you choose '5MP' then you'll get a nicely oversampled photo and that will be the only JPG stored on the phone, so that's the one that gets backed up - this is the best way to proceed. On the Lumia 950 it'll be 8MP but the idea's the same. And if you choose to go for the non-oversampled 16MP/20MP capture setting then that's the version you get backed up. So at least that side of things is now a little simpler.

If I edit a photo on the phone, what happens to the photo that's backed up on OneDrive?

Nothing. What happens is that the new, cropped/tweaked photo (which will have a subtly different filename, e.g. with '(2)' at the end) should also get backed up by the same auto-upload mechanism of OneDrive, so the edited version will be shown as a new, separate image in Photos on all your devices.

The exception to this is when things go wrong - see the above points - if the initial backup goes wrong then only the edited version gets uploaded when things start working again.

What about editing Rich Capture (i.e. HDR) photos - do they get backed up?

No. Adjusting the combination of shots that make up HDR and 'Dynamic flash' photos still results in the same filename inside the phone, meaning that the adjustment to the Rich Capture settings will never make it up to OneDrive, at least automatically. This is probably sensible, since you wouldn't want OneDrive re-uploading a new version of the photo every time you changed your mind about the HDR look of a particular snap. The one that gets backed up is the original, default blend of exposures and is usually, in my experience, the best.

Unless, of course, there's a delay of error when uploading the original, in which case your edited Rich Capture might indeed be THE one uploaded. See previous text on erratic uploading! Sigh...

And, of course, if you achieved a dramatically new look for a Rich Capture snap and you wanted to share it or upload it manually, then you can do so whenever you choose.

Phew! If all this sounds a little despondent here and there then don't be too disheartened - Windows 10 Mobile isn't formally released yet (though first devices are due to hit the USA public later today), it's early days for the OneDrive/Photos/Camera implementation on the smartphone, at least in terms of complaints from real world users and subsequent 'hardening' of the software and servers. I do think Microsoft will 'get there', though I really, really, REALLY wish the company would do something along the lines of my wishes with regards to photo backup allowances above.