Remember when Windows Phone 8.1 was the mainstream and Windows 10 Mobile was the cool OS to play with, break and generally have fun with? As of March 17th 2016, Windows 10 Mobile is a (potential) reality for the majority of users of Windows Phone 8.1. Moreover, Microsoft's own resources are now more focussed into knocking 'Redstone' into shape, meaning that the standard 'Threshold' build isn't going to get anything more than critical fixes from now on. Making me ask the question (of myself), 'Where should my gaze be? What should my primary Windows phone be running?' Redstone, of course. All the way.

And yes, I realise that this entire editorial plays into the hands of "Jam tomorrow", the perennial 'it'll be better next month/year' syndrome that we've all had to live with for the last five years. But, despite doom and gloom stories in the tech media, referring to shrinking market share (hardly surprising, since phone shops have stopped selling Windows phones and Microsoft hasn't put any money into marketing), there is plenty of evidence that Windows 10 is coming together.

As an 'enthusiast' (let's face it, you're on AAWP, so that's you - unless you're a troll, in which case keep your comments to yourself!), you want to be the first to see improvements, new functions, new applications, bug fixes, and more. Although I don't usually advise general readers to position themselves right on the 'bleeding edge', I think the time has come to make an exception.

For a start, we have an impressive volley of application updates. Have a look at the extended screenshot on the right. This was compiled from a Lumia 930 on the Redstone 'Fast' Insiders build a few days ago. It had been left alone for three days and this was the result. It's typical of Windows 10 Mobile at the moment, at least on Redstone, and shows all the signs of feature extending and bug fixing across the board and on a grand scale. Impressive for a 'dead' mobile OS, you might think, except that, for the umpteenth time, Windows 10 Mobile is part of a huge ecosystem and fixes and additions for the desktop/hybrid/tablet all apply (usually) just as much to the smartphone.

So we have the bevy of built-in and third party applications (a sample of which are shown on the right) being updated very regularly, at almost breakneck pace. This does add a certain excitement, a certain anticipation, each day, I have to admit: what will be new tomorrow, what will start working properly, what new UI will suddenly appear for an application? And so on. Never a dull moment on this platform!

Now, it's true that a lot of these Windows 10 Mobile application updates will also be applicable to devices running the production 'Threshold' branch (if you're confused, have a look at my chart at the bottom of this feature!), but not all of them. We've already seen how Windows 10 Maps not exists with a whole new optimised UI on Redstone, taking advantage of new APIs and UI elements. Then there are Camera and Office updates seen first on Redstone. So if you want the latest and the best, it's clearly where the action is.

Historically, the bleeding edge was as painful as it sounds, but let's face it, Windows 10 Mobile's 'Threshold' branch isn't exactly rock solid, so there's very little to lose, in my opinion.

And a whole lot to gain (on Redstone), including:

Convinced? If you're already used to the Insiders programme, then you'll know what to do, I suspect. As a reminder, or if you've so far stuck to production firmware, then:

Watch the gears spin and within a few short moments (ok, ok, head down the pub) your phone will be on the latest and greatest Windows 10 Mobile version.

So what the heck is 'Redstone 2'? Unsurprisingly, it's the follow up to Windows 10 Redstone, also for all forms of the OS. While Redstone is the codename for what we now know will be called the "Windows 10 Anniversary Update" on the desktop (it's not clear how much of this marketing and labelling will be used in the mobile sphere), Redstone 2 is the codename for what comes next.

Our best guess as to timescales is:

And no, we have no information on the codenames further into the future. Redstone 3 would be rather boring, and in fact, we wouldn't be at all surprised if 'Redstone 2' got its codename changed in the coming year.

Comments welcome then. Have I persuaded you to take a leap of faith (in Microsoft) and put yourself out with us on the bleeding edge of Windows 10 on mobile? The company's vision of one OS on all form factors is certainly unique and we're unashamedly into 'concept' territory in some ways. Can such a device/installation also be used as a day to day smartphone? That's where my - and your - data points come in!

PS. As promised, here's that chart again, showing how far each Lumia device is supposed go in terms of support (though the rules can be bent a little, e.g. taking an older x20 device and putting it up to Windows 10 'Threshold' against Microsoft's own guidance): 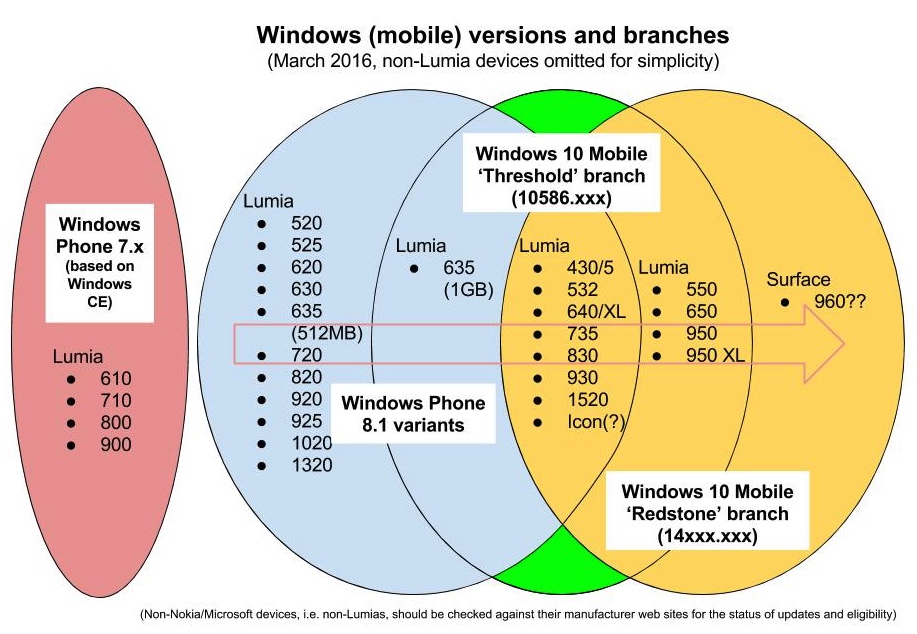