Although Microsoft never gave an exact date for the start of the official Windows 10 Mobile upgrade for existing Windows Phone 8.1 users, it's fair to say that its hints were originally for late 2015 - which then slipped a little. However, at least Q1, 2016 was achieved, if only by a couple of weeks, with the arrival of Windows 10 (10586.164) for a whole clutch of devices, including the popular Lumia 640, 735, 830 and 930. There's an initial hurdle, presumably to make sure that only keener users get Windows 10, and then this will be replaced by the full 'pushed' update later.

Microsoft itself goes over many of the benefits for users in upgrading to Windows 10 Mobile here, in a mini-site.

Plus I did my own '15 compelling reasons' a month or two ago, evaluated over months of real world use, which I'll condense here to:

See the original, in-depth article for an illustrated expansion of all these benefits. It's worth noting that so many of the AAWP community have been living with Windows 10 Mobile for so long (mainly via the Insiders programme) that we take most of the above for granted now. It's a little bit of a shock going back to a stock Windows Phone 8.1 device, i.e. the production status for most people before today's upgrade rollout.

Of course, as I've commented before, there will be some performance disadvantages to upgrading for some older Windows Phone 8.1 devices, though not signficantly for any of the devices being upgraded today.

[Update] In fact, Microsoft has now stated the reason for the split in the table below: "This list includes a limited set of Windows Phone 8.1 devices and does not include some devices that are currently running Windows 10 Mobile in the Windows 10 Mobile Insider program. As Windows 10 delivers significant new innovations, many older devices are not able to successfully upgrade without an impact on the customer experience. Our goal is to only offer the Windows 10 upgrade to devices that we are confident can continue to deliver a good customer experience."

The absence of the old, but capable Lumia 720, 820, 920, 925 and 1020 from the current upgrade and the likelihood that they'll never be given an official upgrade is much as I've been writing about for the last six months. This is the archetypal example perhaps, i.e. on the 1020. The experience really isn't good enough on the old dual core processors. Add in phones with only 512MB RAM as well and you have the full subset of phones which are likely to remain on 8.1 officially. Of course, nothing's stopping a keen user of, say, an old Lumia 925 (or whatever) from signing up to the Insiders programme and getting the latest Windows 10 Mobile build that way - at least until Microsoft deprovisions these devices from the programme (I estimate another couple of months).

As to how to upgrade to Windows 10 Mobile, users of the above supported devices (in the line with the green box) currently need to install the Upgrade Advisor from the Store. 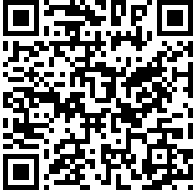 This then explains the update and requires the user to tick a box of acceptance. After this, if everything's OK at Microsoft's end, the device is provisioned for the Windows 10 Mobile update and this starts downloading and installing in the usual way: 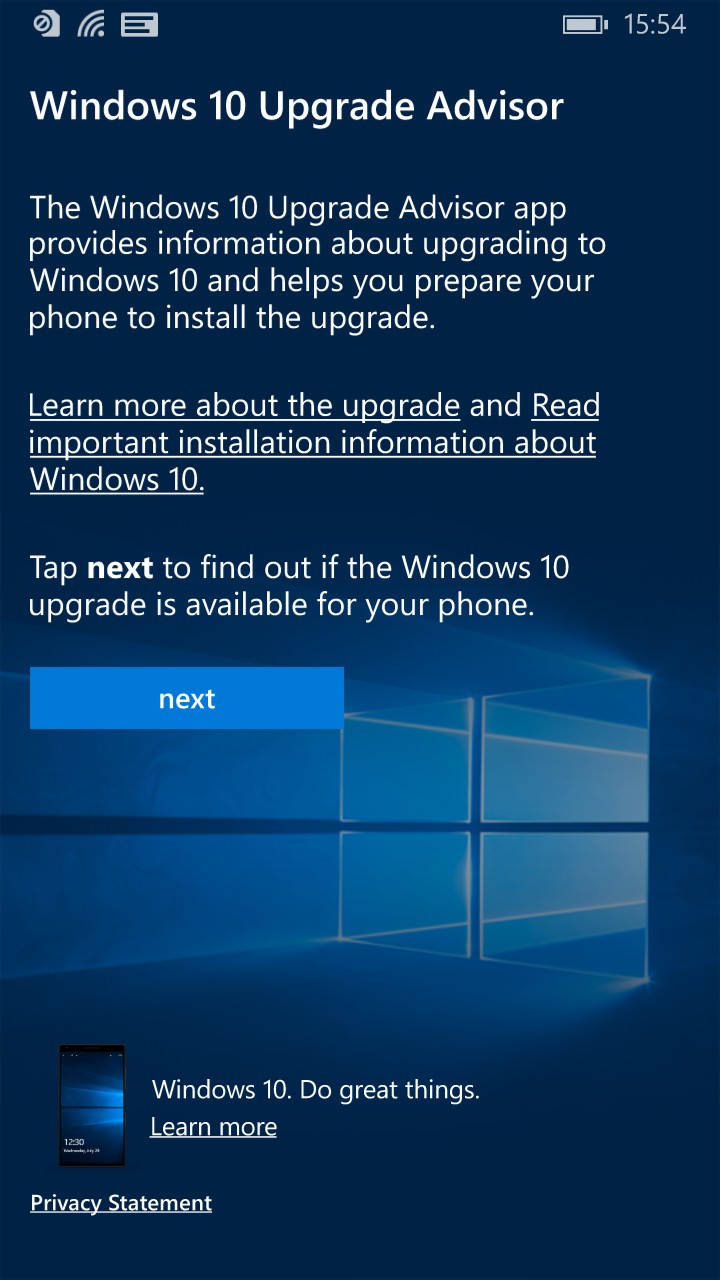 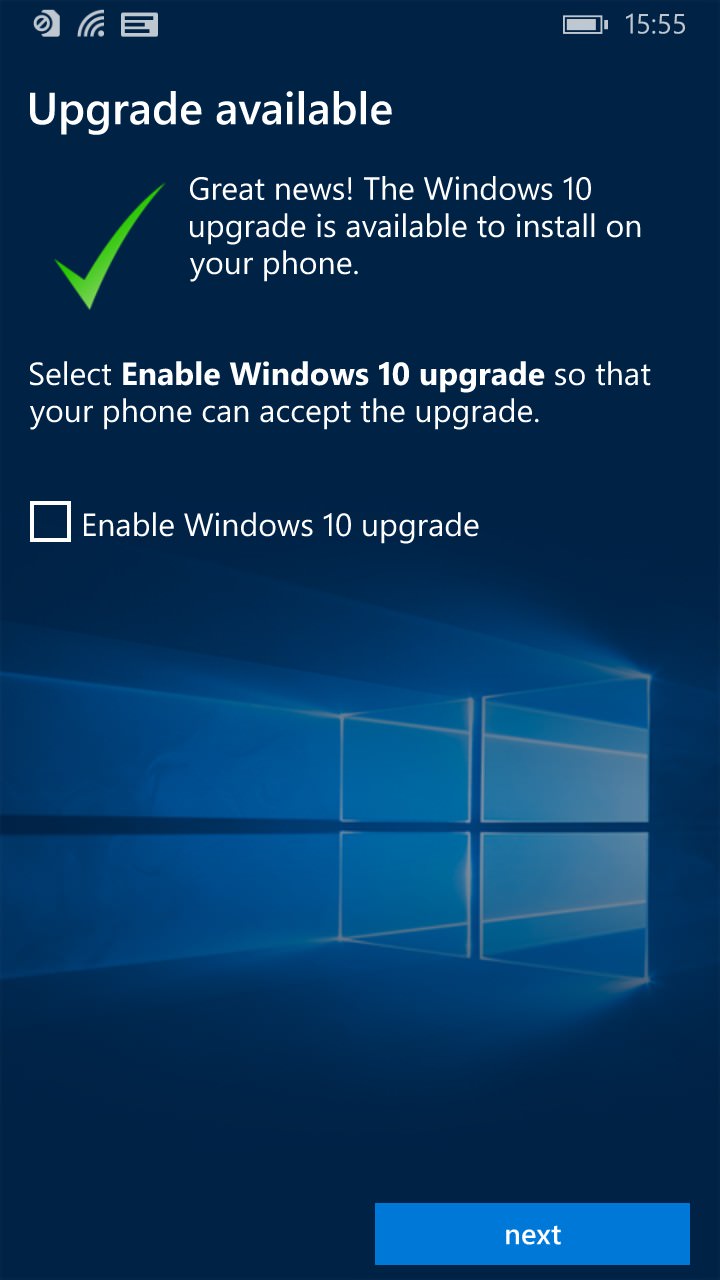 Data points welcomed from non-Insiders reading this, in terms of which devices this all works on at the moment. The above screenshots are from a Lumia 830 and we know the 735, 1520 and 930 are seeing the big green 'tick', whereas my Lumia 640 seems stuck at this 'Eligible' screen, shown below. Still, let's give Microsoft another few days to complete their provisioning, server-side. 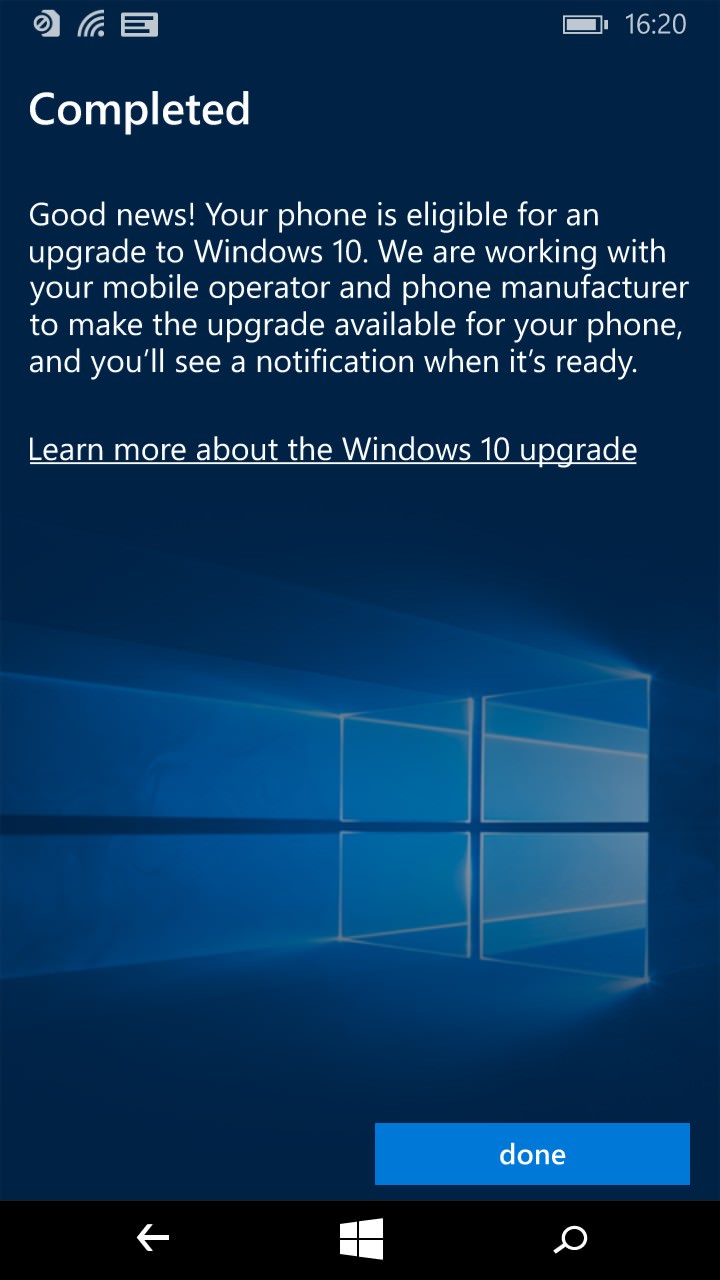 Good to see this making it's way out into the real world of every day users and not just Insiders anyway. Though it'll take some email marketing for the former to know about installing the Upgrade Advisor, so that'll take a few days....

Eventually this update, once Microsoft is happy with how it's going (i.e. monitoring problems, etc.), will be provisioned and pushed without the need for the Upgrade Advisor installation and acceptance.

The sequence here is surprisingly sensible. The nightmare scenario was Windows 10 Mobile being made available to 50 million people at once and the various support mechanisms deluged in mass complaints - the opt-in system via Upgrade Advisor will both keep the less keen away for a bit and will drastically limit upgrader numbers for this first phase.

One curiosity is that the version of Windows 10 Mobile that's rolling out is initially 10586.107 and then - after a brief pause while apps and things update in the background - there's a further update to 10586.164, the very latest build. No doubt there's a good reason for the two stage delivery!

PS. There's now a Microsoft FAQ about the update here. It confirms everything I've been saying over the last nine months in terms of Windows 10 Mobile needing a certain chipset and spec 'in order to provide a good enough experience'. It does raise the question of whether the Snapdragon S4-based devices will EVER be added to the compatibility list. My suspicion is no. It also confirms that if you have an old 8.1-native device that's on the Insiders programme already then you have the latest version of Windows 10 Mobile and you need do nothing. Though it also says that you won't get further updates into the Redstone branch and beyond - which is fair enough.

PPS. There's also an interested list of deprecated features that Windows Phone 8.1 owners should know about before they upgrade:

Any of them showstoppers for you?

PPPS. MSPowerUser managed to extract the official Microsoft video tutorial for the upgrade - the video is quite well done and emphasises steps that regular users may have to go through (e.g. clearing enough space from a full up internal disk) which AAWP readers will probably not need?