One of the requests in the comments recently was to test audio capture when shooting videos. And, as it happens, I'd been thinking about doing this for a while anyway. So I headed out with six smartphones and tried to shoot video and audio in as controlled conditions as possible: in a quiet garden, by a windy, noisy road, and in a rock-level music setting. That should be enough to set the best from the rest, I thought... 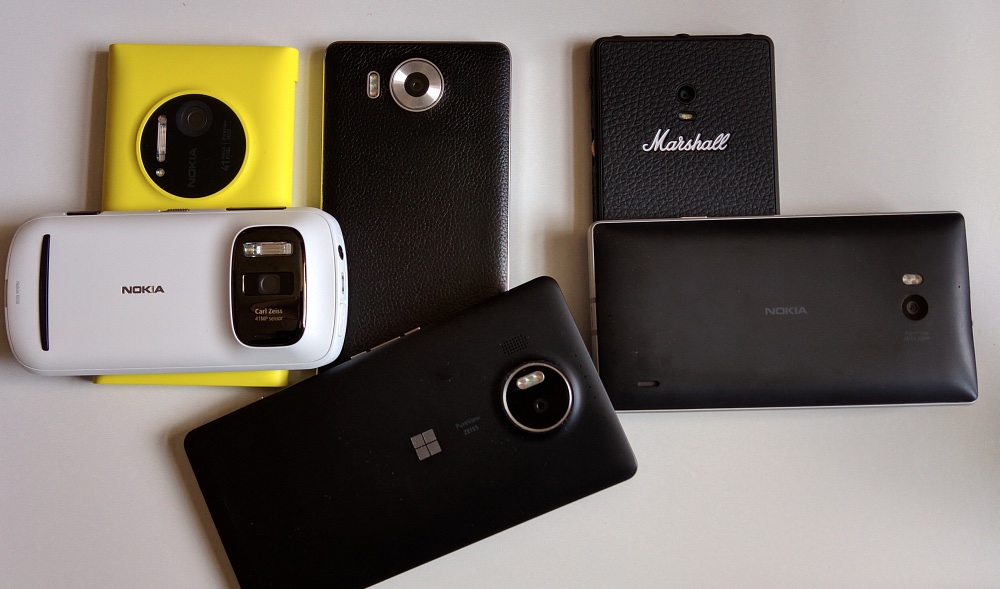 Here are the six smartphones I took with me:

The inclusion of the Marshall London was because it claims stereo MEMS microphones, just like the best Lumias, i.e. is 'gig ready'. We'll see. And the order of the devices above was messed up slightly by me (ahem) forgetting to shoot with it at first. Oh well.

Yes, there are a hundred other devices and OS combinations I could have tried, but these are only data points at the end of the day. What I was particularly interested in was how the various generations of Nokia/Lumia fared against each other - and also whether that Marshall phone could come close.

My test video/audio settings were:

I then compiled the footage from all the smartphones into a montage, with comments below on how the various smartphones did. Bear in mind that the video below is hosted on YouTube, and so some of the service's compression will have been used, though I wouldn't expect that to affect audio much. Note also that the video side of things is deliberately only at 720p - I wasn't testing the picture side of things at all, so I kept things quick and light.

Here's my assessment of how each smartphone did on the audio front. Note that this would be the point in a cross-device video capture comparison where I point out that the 'gig' bit is a non-starter for most smartphones because they simply can't cope with the volume - yet every phone here coped well, thanks to Nokia and then Microsoft (and Marshall's) use of MEMS high amplitude microphones. Amazing.

Anyway, on with the verdicts:

As usual with my features, I do like a few numbers. So I took the liberty of scoring each phone/software combination out of 10 for each scenario:

The Lumia 950 is clearly underperforming here - my gut feel is that its firmware is letting it down - maybe I should bump it up again to Redstone, since the 950 XL performs vastly better in terms of audio capture - and the microphones and electronics are (in theory) the same?

The Lumia 1020 is the stalwart it always was and probably still the best compromise overall when it comes to great video capture for picture and audio plus a workable modern OS (in this case Windows Phone 8.1). While the Marshall London impresses mightily for an Android phone in terms of audio but can't compete in terms of picture quality, and the Nokia 808 is left as the gold standard, yet again - this is now a four year old phone and its output is still bettered by nothing else in many ways.

Comments welcome of course, if you have time to watch - and listen to - the video above. Do you agree with my assessments?