Car mode part 2: How to operate (nearly) hands-free with Cortana and Maps

Last week's mini-review of Car Dash and my bemoaning of a Windows 10 Mobile equivalent to 'Android Auto' sparked a storm of comments, not least from those who pointed out that some of what I was asking for can already be done - in Cortana... if you know the right setting to turn on. So here's more comment on the idea, along with the vital 'how to', to make sure that you too touch your phone as little as possible when driving!

Let's start with the use case - from my previous piece:

The use case for a car mode is obvious, hopefully. In the car, your smartphone is probably your sat-nav these days, your source of podcasts and music, plus it's obviously your main mode of communication with the world. You'll probably have the phone propped in a holder by your dashboard and youll be used to barking 'Hey Cortana' commands at it, for example asking to send a message to someone, call someone else or navigate to a particular destination.

I then went on to request that Microsoft match Google's Android Auto with an all-singing, all-dancing in-car utility - which I still want - but the feature glossed over the mention of Cortana in the opening paragraph. You see, Microsoft hasn't exactly ignored the Windows Phone/Windows 10 Mobile experience when driving - it turns out that Cortana has a buried setting which can help enormously.

In fact, it does it so well that I thought a walk through/tutorial might be useful.

It's all based (naturally enough) around Windows 10 Maps and navigation. So, for example, you'd (hands-free-ish, remember) typically say "Hey Cortana" (in a quiet car!) or long press the appropriate control and then say "Navigate to xyzabc" (or whatever) and then you'd be off and running. But before you do that, you'll need to head into Cortana itself and change a setting, as shown below.

Bring up the hamburger menu and look right at the bottom of the menu for 'Settings'. Within this, scroll to 'Read incoming text messages aloud' and set this to whatever suits your use case. In my car, I connect via Bluetooth to an audio kit, so went for 'Bluetooth only' - but you may want to experiment here: 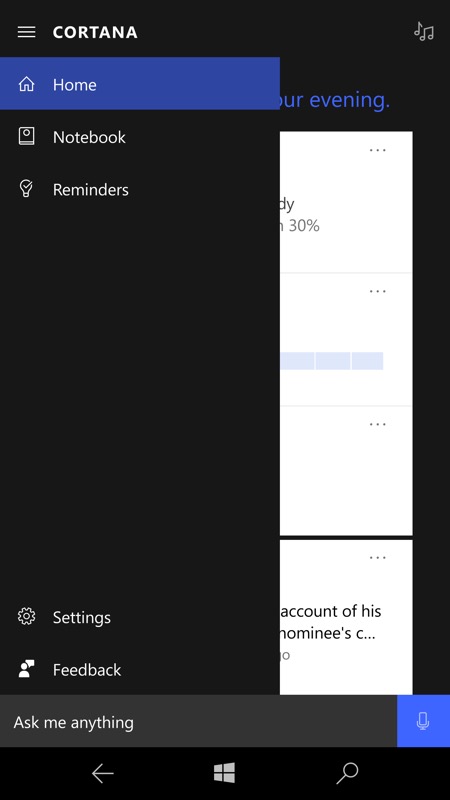 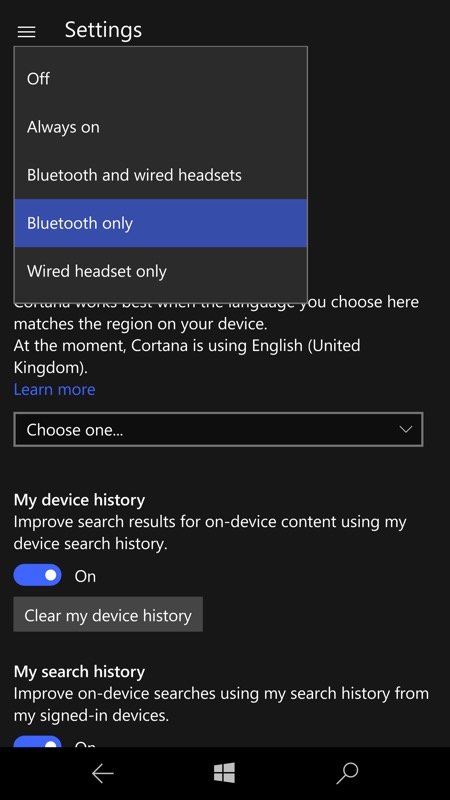 With that set-up, you're all set for incoming text message handling (we'll leave IM and Twitter DMs and email, you really shouldn't be worrying about these when driving!).

So, you're driving along, navigating following a Cortana 'Navigate to' query, and suddenly a new text arrives (in this case from - ahem - myself, from my 'other' SIM card - hey, this is a test!). Cortana suspends all other audio (including music but also navigation instructions, very briefly), to let you know of the text, then (on voice command) reading its contents aloud to you, in addition to displaying it in a large font on the phone screen: 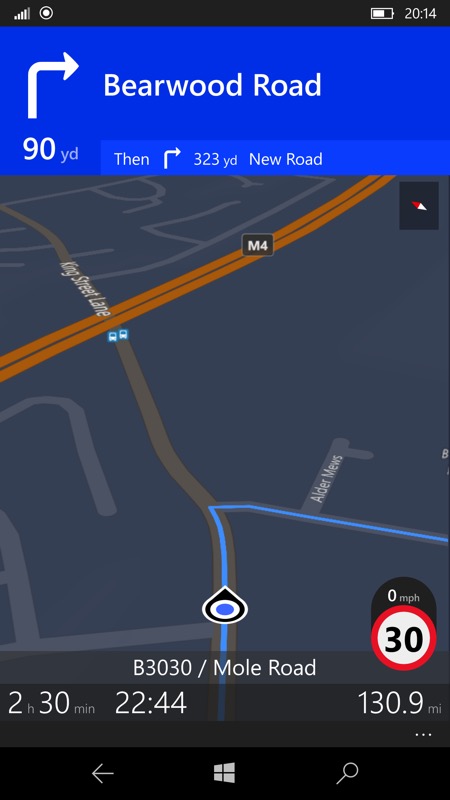 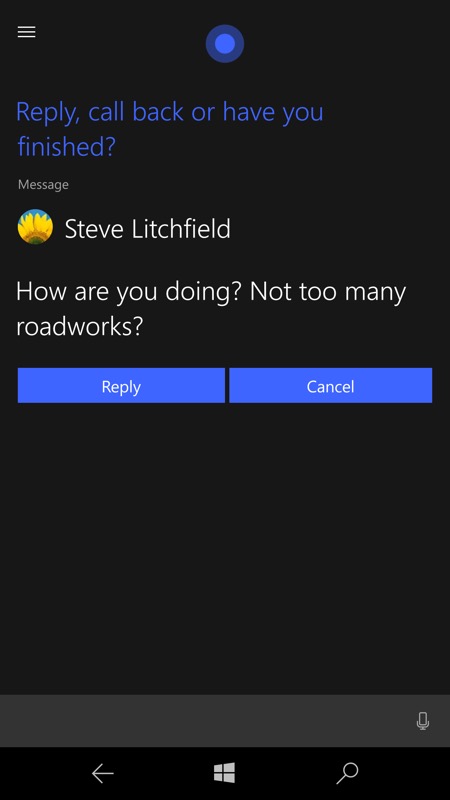 The three options offered by voice - 'Reply', 'Call back' or 'Finished' are sensible. The last is self explanatory, returning you to Maps and navigation, while the middle one is also obvious, wherein you're put into a call to that contact via your current hands-free solution.

'Reply' is well done though, with Cortana asking directly for your reply text, accepting it all via voice and then sending it if you're happy - all without you touching the phone (even in its hands-free holder) at all. 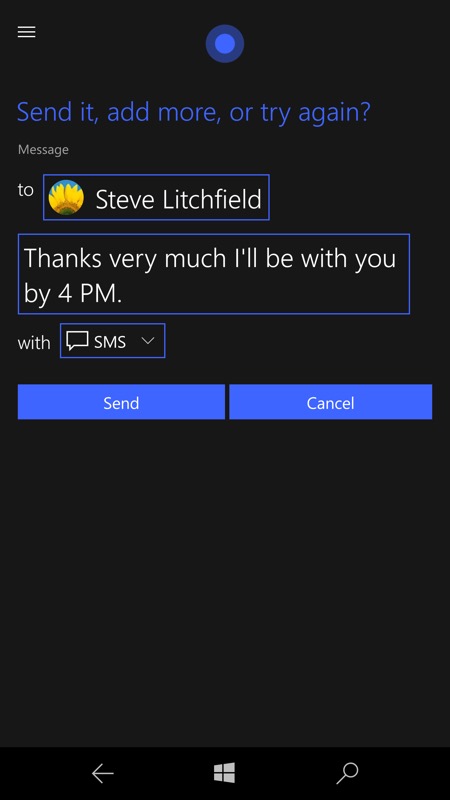 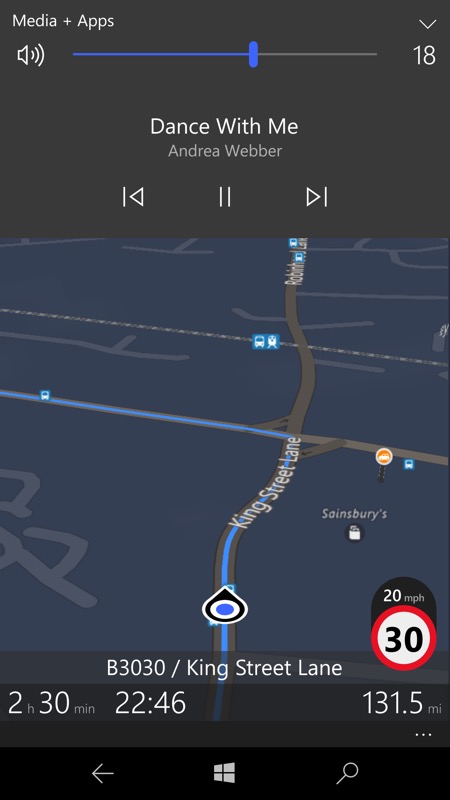 The other aspect of Android Auto which I admired was being able to handle music and podcasts while driving, and here things are slightly more cursory on Windows 10 Mobile. With an album of music set playing before you start driving, or with a podcast started playing, a touch of the volume buttons on the phone brings up the familiar pop-up media player and you can pause playback (or skip tracks or adverts) with a touch. This does mean physically interacting with the phone in its holder, but the volume button press can be done 'blind' and you'd just need to glance across briefly and tap the appropriate on-screen control if needed. So not perfect, but do-able.

Of course, there's no way to delve into a podcatcher or Groove Music to queue something else up in the audio department - at least not until you've pulled over to the side of the road safely. This is an aspect that Android Auto handles very elegantly (and safely), along with a 'home' pick list of recent driving destinations and contacted people. Which is why, despite the elegance of Cortana's involvement above, I still hanker after an updated Microsoft Lumia Car Mode or Car Dash.

As mentioned briefly in my last piece, there's also what Microsoft calls 'driving mode' in Settings, wherein texts and calls can be actively ignored (if you see what I mean) and even auto-replied to, all the while you're connected to a named (in the set-up wizard) in-car Bluetooth device. It's a clever system, but it's a pale shadow of the proper call and text management system in Cortana - and I'll bet that 99.9% of Windows 10 Mobile users haven't the faintest idea that this 'Driving mode' settings exist. Even less than the fraction who knews about the Cortana features here! 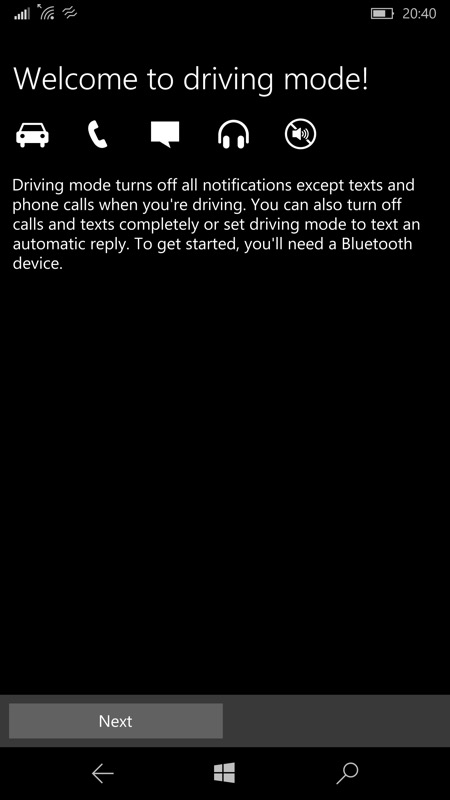 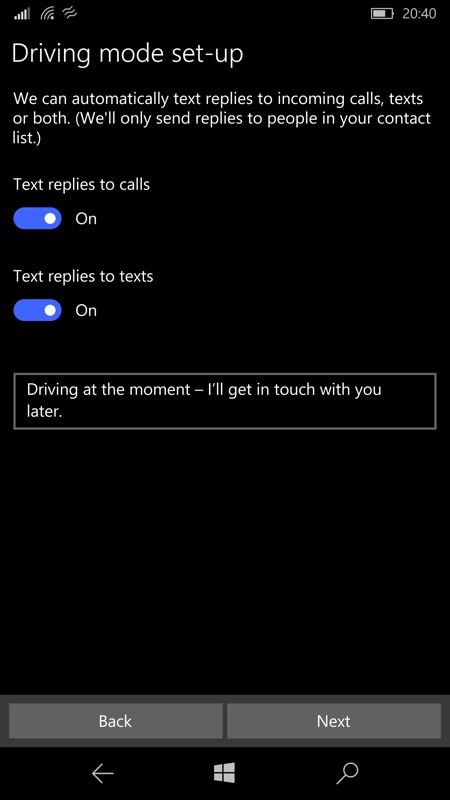 Due partly to a change of personal circumstances I'm spending more and more time in my car - and the safer and yet better navigated and better entertained I can be, the better.

I for one had quite forgotten that Cortana could leap in to read incoming text messages and handle replies in hands-free style - apologies if you already knew this! I'd welcome comment on whether all the above is enough for you though - Maps+Cortana? Or a dedicated Windows 10 app?