AAWP reader Brady Nielsen contributes material to the Anatomy of a Lumia photo series here, with no less than nine photos, with comments. Though he bent the rules slightly, as I once did, by using photos from a HP Elite x3! All good snaps and hopefully we can all learn from his comments below.

Over to Brady, anyway:

Back in my early days as a WP8/8.1 user, I followed Windows Central.  Over time, it seemed to be more about games and less about phones.  I somehow stumbled across your article concerning how the camera/OIS worked on my Lumia 1520 and I was sold. The thorough detail and explanation, I feel, helped me use my 1520 camera more effectively.  [Ed: aw shucks]

I did enjoy your latest Anatomy of a Photo #15.  However, after reading the article I was quickly drawn to the #2 you took with an Elite x3. That is the exact phone I replaced my failing (microphone and battery) Lumia 1520 with and I must admit that while it seemed like a step forward (biometrics, Continuum, etc.) it definitely felt like a step back (mostly with the camera, although I still romanticize about the WP8.1 days in general – to me, that was the golden age and the Lumia 1520, for me, was the phone).

I travel a lot with my job and often times have chance opportunities to take a photo or two.  I am starting with three photos taken with my Elite x3 which really surprised me (as my expectation of this camera has never been much).  The Elite x3 can, with some great lighting, take some very good photos.

Note that for all the shots below, clicking the web-resolution version here will download or enlarge it to full resolution! 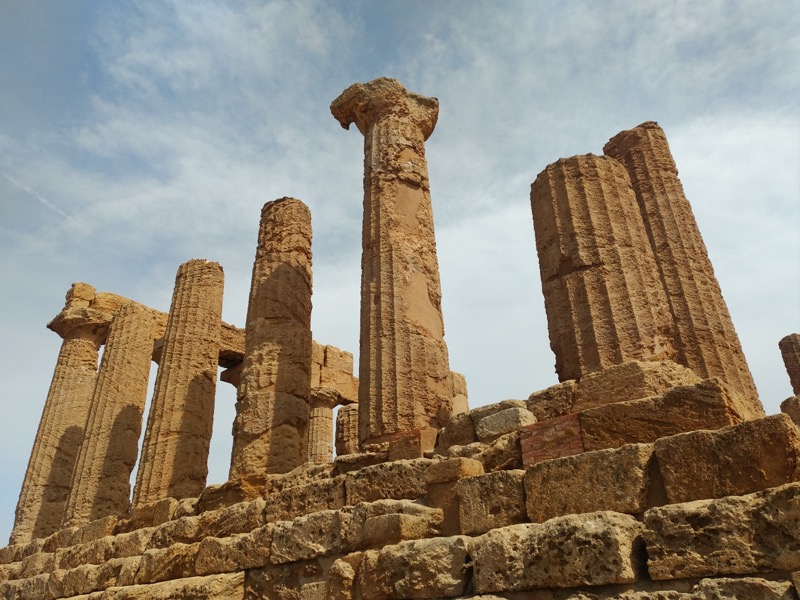 This photo was taken at a beach on the island of Guam.  This one really surprised me because it was the first time I really saw the Auto HDR give me a fascinating result (from the non-HDR shot which is not included).  The lighting so impressed me.  The Lumia 1520 seemed to balance light quite a bit better – even without HDR [Ed: surprise, surprise...!], so it was a real surprise to see my Elite x3 give me this. [Ed: nice shooting angle, low down, emphasising the way the columns reach for the sky] 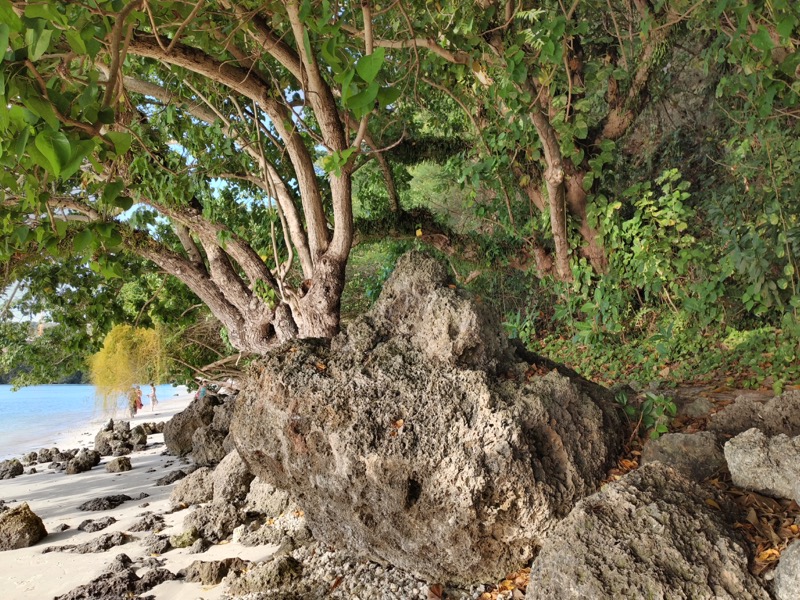 This was taken at the Valley of the Temples in Agrigento, Italy (Sicily) [Ed: interesting composition and loads of well-lit detail. I liked the inclusion of some horizon/sea-line in the background, for context.] 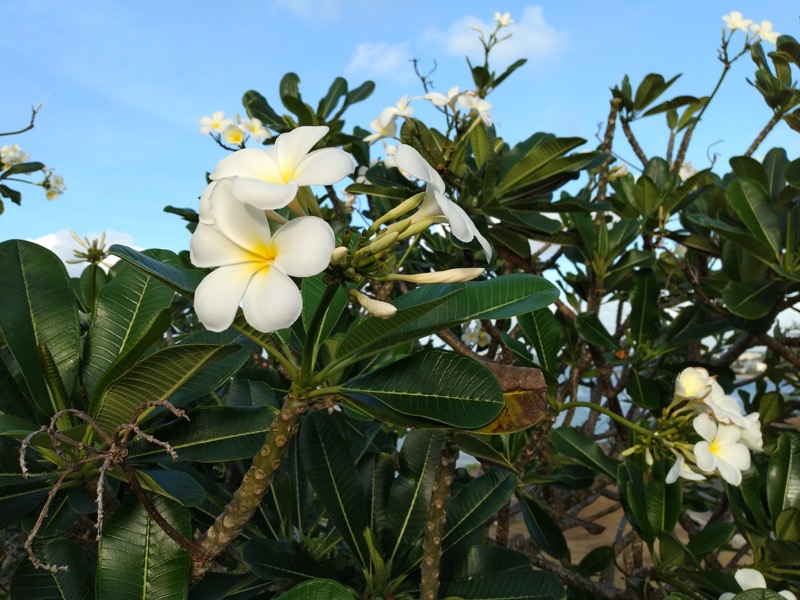 Another shot from Guam. Again, I was completely taken off guard with how well this shot turned out – not so much the composition, but the detail.  In my mind, if you can get the Elite x3 the right amount of light, it can turn out fantastic results.  In fact, if you look close, you can even make out the ants crawling around the bases of the flowers.. [Ed: lovely textures and detail - typical of a shot in good lighting, so tech like PureView isn't really needed. The framing follows the 'rule of thirds' in that the skyline is roughly a third the way down the frame, plus the main flower is roughly a third the way across.]

In all this, more than anything, I wanted to share my enthusiasm of exactly what Windows Phone/Mobile is/was capable of.  I still take my Lumia 1520 with me – sometimes.  I have finally migrated to a Motorola Z2 Force - I was mostly excited about the Hasselblad photo 'Mod' (10x optical zoom).  It is a great phone but will never match the experience of my Windows Phones.

On then with some Lumia 1520 examples: 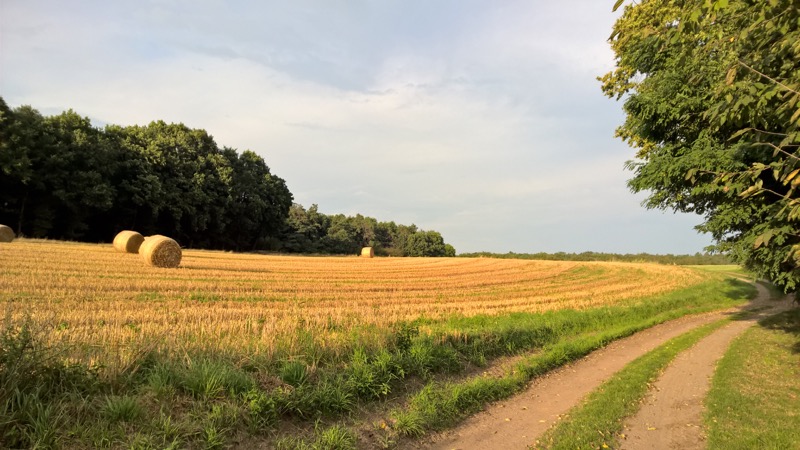 This is a pastoral scene from a field adjacent to the See Woog community park in Miesenbach, Germany.  I was on a walk and came upon this scene.  My framing is never the best, but I didn’t want to stray off the path too much as I wasn’t sure if doing so was allowed.  Luckily, this vantage point allowed me to capture (what I felt was) the sense of an old European farm (in the U.S., actual rolls of hay are a rarity – you will usually find them in bundles), and a distant, rolling-hill feel with the tractor-combine paths and vehicle tracks.  I was fortunate in that I was able to frame-out the local traffic and aircraft (it is next to an airbase). The late afternoon sun gave (I felt) the perfect, warm colour to the scene.  I would have preferred a clearer, blue sky, but have accepted the fact that with travel photography the opportunities are limited and that you take what is handed to you! [Ed: nice use of 'Golden Hour' light - when the sun is low in the sky and the light is 'warmer'] 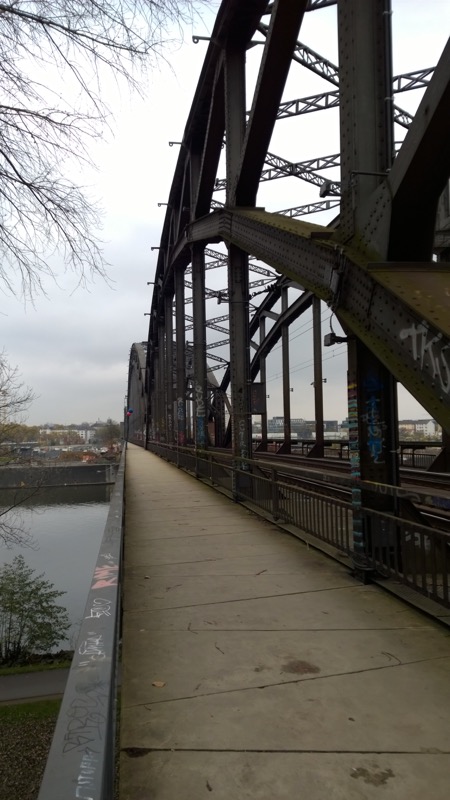 I took this after crossing a bridge over the Main river in Frankfurt, a truly fascinating city.  As a young U.S. citizen in the 60s and 70s, my impressions of Germany (West, at the time) came from a seemingly Cold War-focused media (films, news, music, etc.), which, to me, painted an industrial, gray scene, which is what I felt I captured, in part, here. The overcast November sky, the riveted steel of the bridge, the cold dark river, the hard gray concrete, and the only source of vibrant color (all others being framed out) being the graffiti.  I do like the framing and composition.  However, my big regret on this and many other photos I took at the time is that I used a 16:9 aspect ratio on the Lumia instead of a 4:3 – which makes framing photos like this near impossible.  I now, almost always, keep the aspect ratio at 4:3. 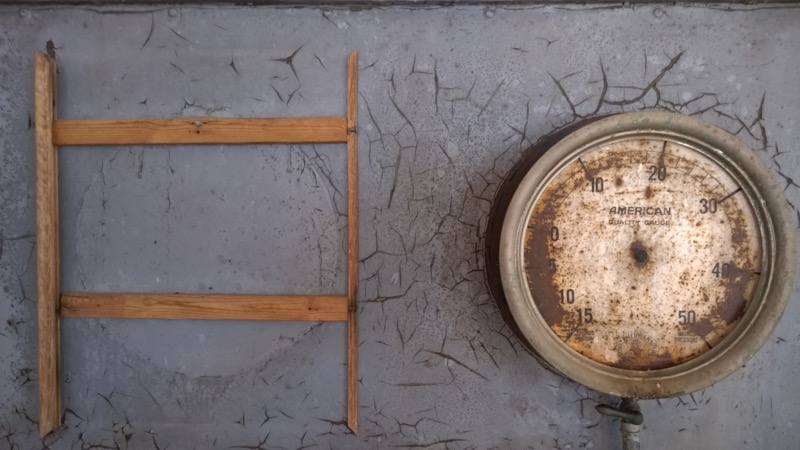 Aside from the framing being 'off' (in my opinion), this is yet another regret that I did not use the 4:3 aspect ratio on the photo – although it does seem to align with the wood frame and gauge on the wall.  My real fascination here was the texture – of the aged wood, the masonry wall, the peeling paint, and the rusting gauge.  I actually prefer the edited version of this photo in which I oversaturated the colors, but didn’t feel it would really tell the story of the capabilities of the camera.  Again, at 1/17 exposure time, the OIS on the Lumia 1520 must have played a good hand in this.  This photo, at least, gives a sense of what might have been a great photo.  This was taken at an historic dam operations building at the Riverfront Park in Columbia, South Carolina, USA.

Finally, for this three part feature, some photos from my first Windows Phone, the Lumia 810 on T-Mobile!  I had walked in to get a Samsung Galaxy S3 (perhaps S4 – I can’t quite remember).  However, they were fresh out.  It had just been a week prior that I was on a flight sitting next to a gentleman who was kind enough to demo his Windows 7 phone for me (can’t remember the model).  I was intrigued, but not sold.  I decided to take a leap of faith and fell in love with my Lumia 810, despite T-Mobile’s very poor support of the phone (luckily Nokia updates and the forthcoming Developer’s Preview updates sweetened the deal). 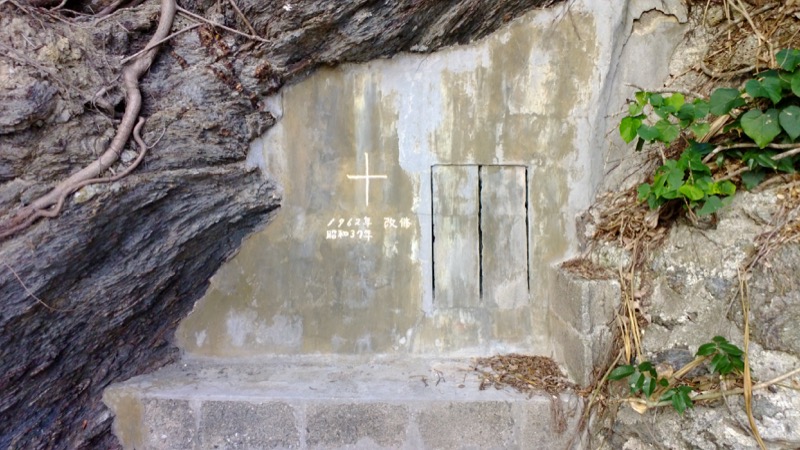 While strolling the beaches of Nago on the island of Okinawa, I came across this – which I believe to be an embedded shrine [Ed: looks more like a cricket wicket someone's painted on, for a game!!] facing out to sea, covered by overgrown trees on a small rock jutting out from the rocky beach – perhaps from 1962?  Not easily noticed.  I would be curious to know how others see this photo to see if, from the photo itself, they can detect the warm light from the sunset, for example.  I could only wonder as to exactly what was on the other side of concrete barrier.  Not knowing any Japanese, the scene left me with only a hint of the human activity that had taken place there.  The quiet, gentle waves and the surrounding silence added to the mystery of the scene. It is certainly the unknown and unmentioned places like this that make the journey an adventure for me.  I like the colors – mostly earth tones with a touch of color from the vines.  It turned out better than I might have hoped with the slow exposure – not bad for what was considered a mediocre device.  Had I to do it over again (I actually have many times due to my travel – this was my first and only with my 810) I would have reframed and shot with a different aspect ratio.  This scene has taught me a lot about lighting and time of day with the many chances I have had to photograph it. Valuable lessons… 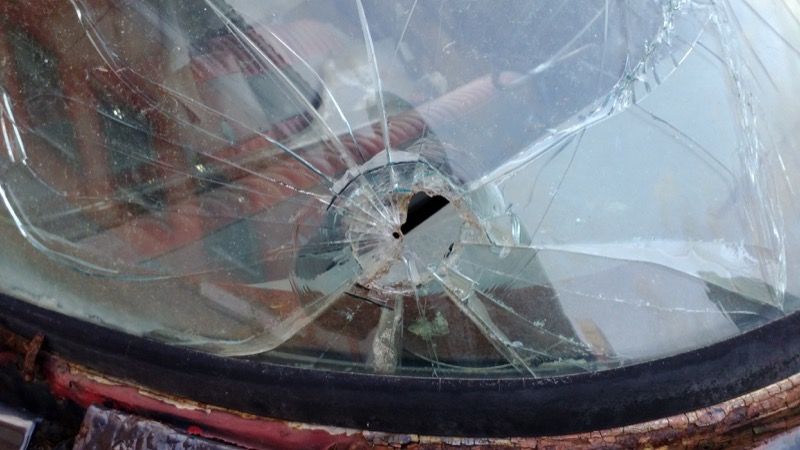 This was an abandoned junk car out in a grassy area at a place called American Village also on the island of Okinawa (the car has been gone for some time now).  Not necessarily something that I would hang in my house, but I felt the broken glass and rust made a nice combination.  I was almost able to hide my own reflection behind the impacted glass – but not entirely.  This was taken with the early Windows Camera software (I think my phone had the Portico update – nothing else) which was verrrrrrry slow.  And, at the time, if you were storing photos on an SD card (with only 8GB on the phone, you practically had to), there was some degree of probability that the photo would either get scrambled (I have many photos like this from the time) if they didn’t disappear entirely.  That being said, I felt that the 810 did a great job with all of the auto settings (we didn’t have a choice early on) such as light balance, focus, etc.  I love my Lumia 810, still have it, and still occasionally use it.  I keep both my 810 and my 1520 on WP8.1.  The Elite x3 is on W10M, of course. 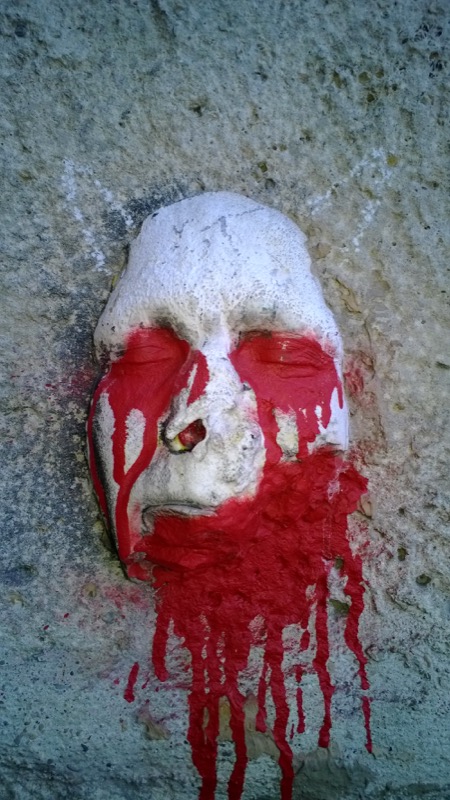 I had an afternoon in Paris while waiting for a flight later that night.  I found this embedded in and painted on a wall across the bridge from Notre Dame while waiting for my ride.  Again, for the Lumia 810, I was impressed with how well it captured the likeness of the mold.  Even now, when I look at the photo, it still feels like an actual face poking through a wall.  As I have found with the other phone cameras, if the lighting is good, the shot is set up right, and you can hold still, even a lower performing phone/camera with the right software can do wonders.  I should mention that, as I recall, a significant SW upgrade took place between the previous photos and this one.  That was a big deal for the camera on the 810 at the time.

Thanks, Brady, for letting us share your favourite photo examples!