I thought this might be of interest, from someone who was all in on Windows 10 Mobile and Continuum (or Android and Samsung DeX) as the way forward four years ago. Even though Windows 10 Mobile had the rug pulled out from under its feet by Microsoft and then died the death of (lack of) a thousand apps, the dream of hot-desking lives on in other guises. Witness my data point below - it's not a perfect solution but it's technically elegant.

The core idea, as you'll remember, is to have a device that's small enough to carry around, with all one's local files and with all the applications needed, but also fully signed into all one's online accounts - which can plug into some kind of dock in a hot-desk environment, whereupon your small and light device becomes a more capable desktop environment with all the office peripherals one might need.

Back in 2015 when Microsoft launched Continuum with the Lumia 950 range, the concept was that the device could even be a phone, running Windows 10 Mobile and UWP applications that would take full advantage of a larger docked display and peripherals. And Continuum did work, I've demonstrated it many times, though it was hampered by:

This last point is contentious, mind you, since Samsung's very similar DeX system (which postdated Continuum), despite being in over 100 million phones, is unknown outside the uber-geek community.

So the world has moved on, into a world that largely ignores the idea of hot desking and plugging in, in favour of totally seperate devices joined mainly by the Cloud. Which works... but doesn't stop me wanting to keep exploring the idea of a hyper-mobile device that can do more when one arrives in an office.

More to the point, can one do this while staying firmly in the Windows world? As it turns out, yes, with some caveats.

The Surface Go has been a favourite device of mine for well over a year now - it's so light and small in a bag or briefcase. It's not pocketable as a phone would be, and it doesn't handle phone calls, but the Surface Go is something that I can easily take with me most of the time, with few compromises. My favourite Windows UWP apps - and my old Win32 ones - plus the power of Chrome or Edge and a full browser, all in a touch screen environment, mean that I can do almost everything with the Go. 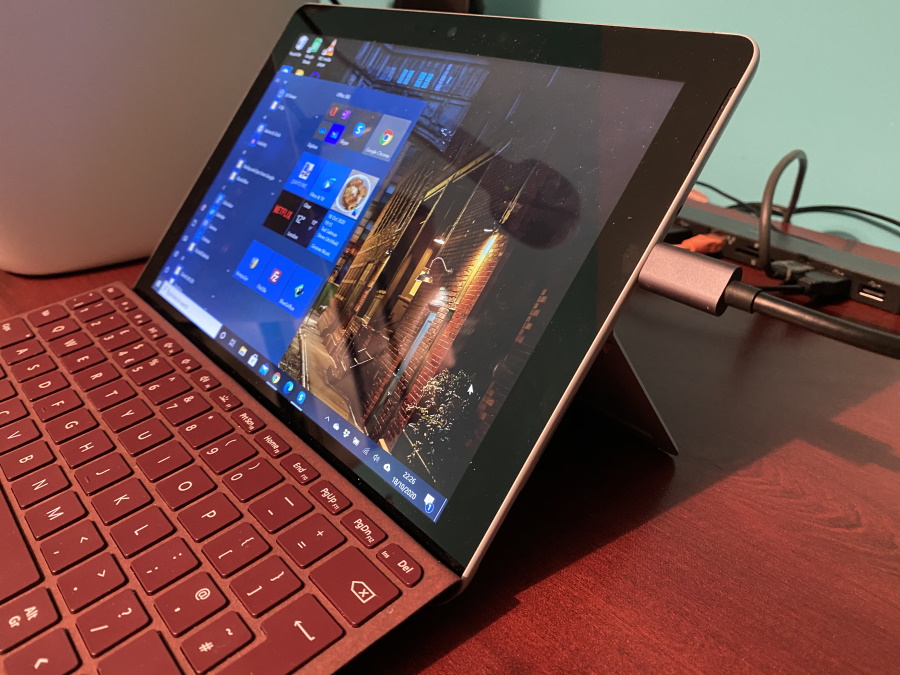 But ever since I reviewed the Vava 12-in-1 hub (sent over from the USA, but you'll find similar hubs on Amazon UK) I've had the idea to set up a home office around the Go. In this case at my dad's house (he's elderly and needs frequent visits) but you might have your own similar uses cases. Around a decade ago, while my computer-literate mum was alive, I'd set her up with a Windows 7 desktop PC, complete with printer, stereo speakers and wired into a router. She put it to good use until 2015 when she sadly passed away.

Now, a 2010 Windows 7 PC (4GB RAM, hard disk) is capable of running Windows 10, but it runs it way too slowly in 2020. The OS has marched on and expanded and it was like watching paint dry launching Word or doing anything meaningful. Yes, a SSD and more RAM would have kept it going for another year or two but a desktop tower PC, which weighed a ton and with noisy fans, didn't seem a very modern way to go.

At which point I looked at the Vava hub, then at the old PC's peripherals (printer, mouse, speaker system, microphone, wired connection to router) and wondered if my Surface Go could handle it all, i.e. could I leave it all in place, rock up with my Go and just plug in the flying Type C lead? 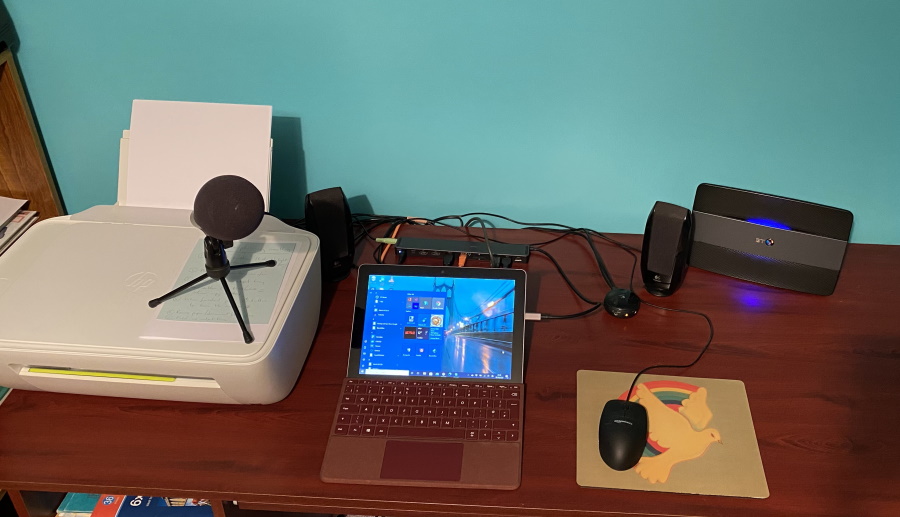 As it turns out yes, again with a few caveats, which I'll note in case you decide to play with something similar:

So not quite mobile or hot desk nirvana, but hopefully a useful data point for others thinking along the same lines. The point here is that this kit is either being reused or relatively inexpensive, so I can leave it place without any worries. When I turn up with my ultra-mobile computer it's just there, ready and waiting.

The Surface Go/hub concept works brilliantly for me. When I do plug in the Go at my dad's house, I can print, I'm wired at full Ethernet speeds, I have studio quality hifi sound (there's a bass reflex unit on the floor), and I can navigate Windows with a mouse (usually the fastest method, though of course the precision trackpad and touch screen are still available). 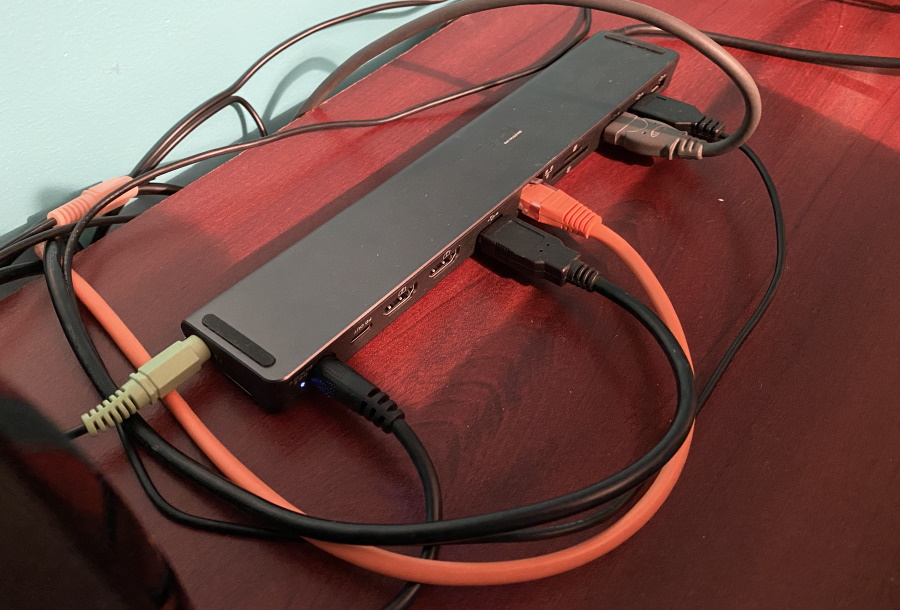 Could the system be improved? Of course. A Surface Go 2 and a 26" or so HDMI monitor spring to mind. Maybe i could experiment with a high quality PC keyboard - my mum's old one was from the clackety clackety era and was truly horrible, so it's now in the recycling bin! I like the Go's snap-on keyboard (Type Cover), mind you, and adding a physically separate keyboard feels an awkward step too fer. But all of this is a job for the coming months as I experiment!