Microsoft's 'Your Phone' software, now effectively built into Windows (in that you're prompted to 'link your phone' when first signing into Windows on a PC), has been evolving nicely through 2019 and 2020, see the linked stories below. But it's not quite a 'slam dunk' yet, partly due to mobile platform limitations, partly because it still feels a little like a solution to a problem that few people have in the real world...

As a reminder, although it was first mooted by Microsoft in 2018, we covered the launch of Your Phone to the mainstream at the Samsung Note 10 event in August 2019, highlighting the work done in Samsung's Android flagship to work with Windows, with an accompanying review of progress so far (calls, contacts, messages, photos, notifications) and separate announcement of Android app integration, with availability a month later, in September 2020.

Essentially, 'Your Phone' is Windows software (in the Store, as I say, but pushed heavily as part of Windows setup) that talks to counterpart software in your phone to deliver (depending on phone):

As you can see, the iPhone and iOS are excluded from the meat and potatoes of Your Phone because there's not enough under the hood access allowed by iOS. It could be argued that an iPhone user might have a Mac for a desktop/laptop, mind you, so in practice an iPhone owner wouldn't expect to have much interoperability with Windows 10.

Note that there's also a super-tier of Samsung flagships with extra 'Your Phone' functionality, in that the very latest flagships can work with the latest Windows builds to offer multiple concurrent Android applications running in the UI on your desktop. However, this is currently reportedly rather buggy and unstable, plus I don't currently have any hardware new enough to try it. See here for compatibility and requirements. I'll come back to this with a review Galaxy S21 series device in a month's time, hopefully. For the moment, my trusty Samsung Galaxy S9+ runs the top-right set of functions above just perfectly, so I'm basing my thoughts here on that.

First of all, a walkthrough refresher, with the new app functionality in place: 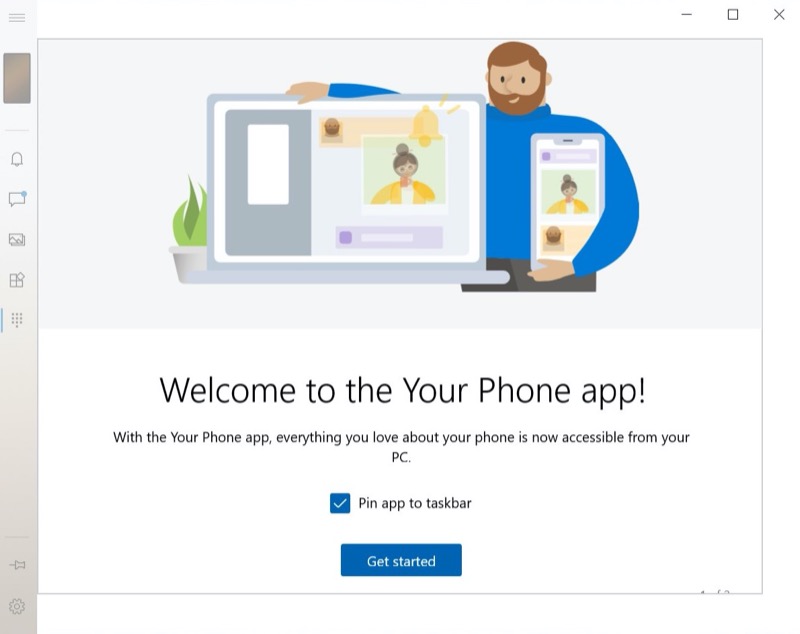 Getting started is as easy as starting the desktop app - the default pinning to the taskbar is actually handy - it's only ever one tap away then! 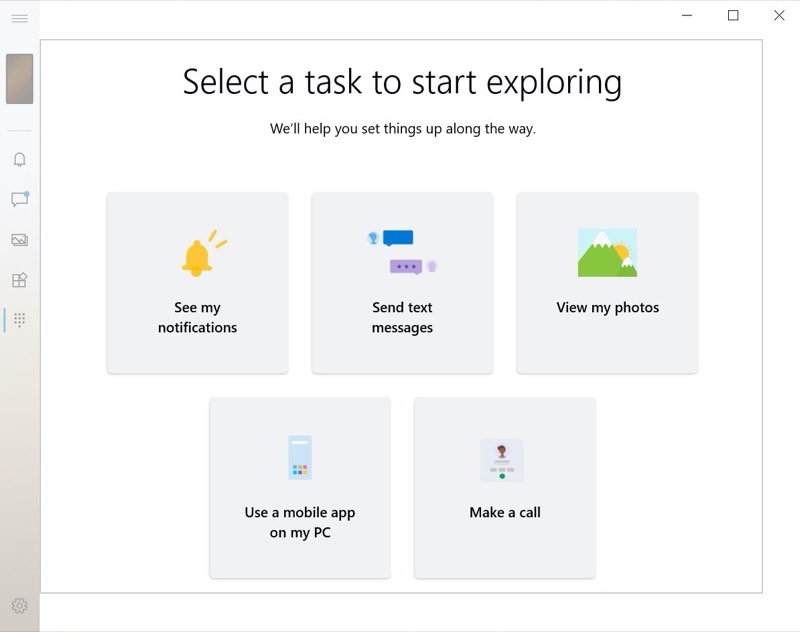 These five options aren't different from the hamburger (left) menu, but they're bold and easy to access first time out for newcomers. 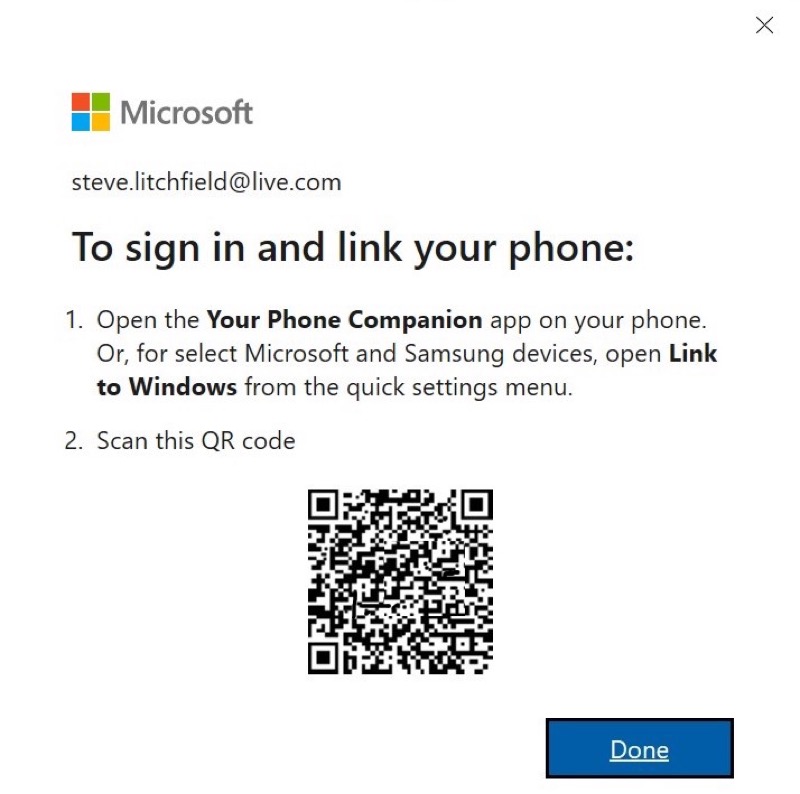 Using a QR code to do the actual linking is smart, though do note that it's assumed that you have already paired the phone and desktop via Bluetooth - this could also be spelt out by the set-up routines as newcomers will otherwise come to a grinding halt. 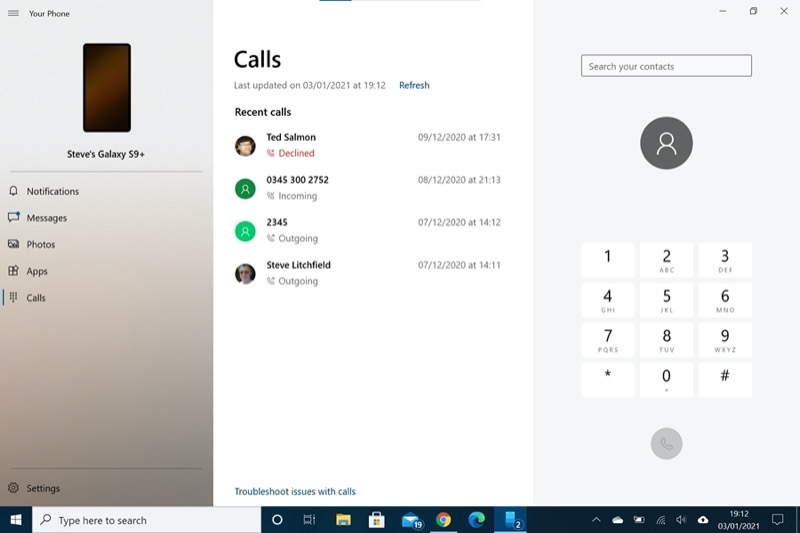 The 'Your Phone' basics are still here, of course - handling of phone calls on your PC's microphone and speaker (if available - some desktops need not apply!) 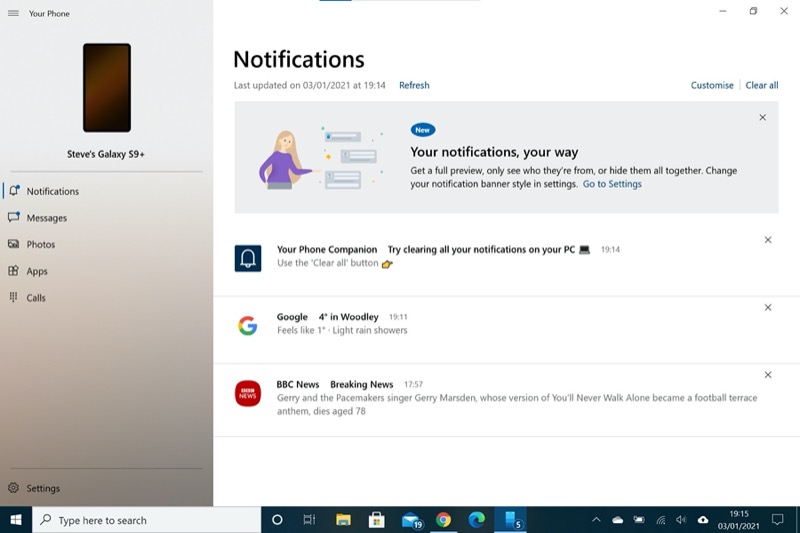 Ditto notifications, which you can deal with on either phone or PC, using mouse of touchscreen, either in the 'Your Phone' UI or via the standard Windows 10 'corner' notification pop-ups (which show as 'via Your Phone') 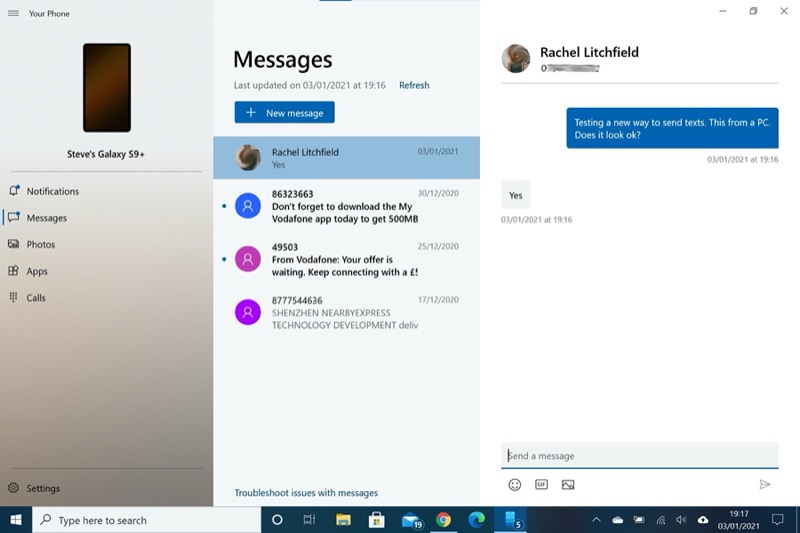 Messages is perhaps the main reason to use a solution like this and, happily, handling texts via a large screen and keyboard is a pleasure - you can see so much more, plus it doesn't interrupt whatever you were doing on the PC in order to pick up your phone. See my thoughts below on all this. 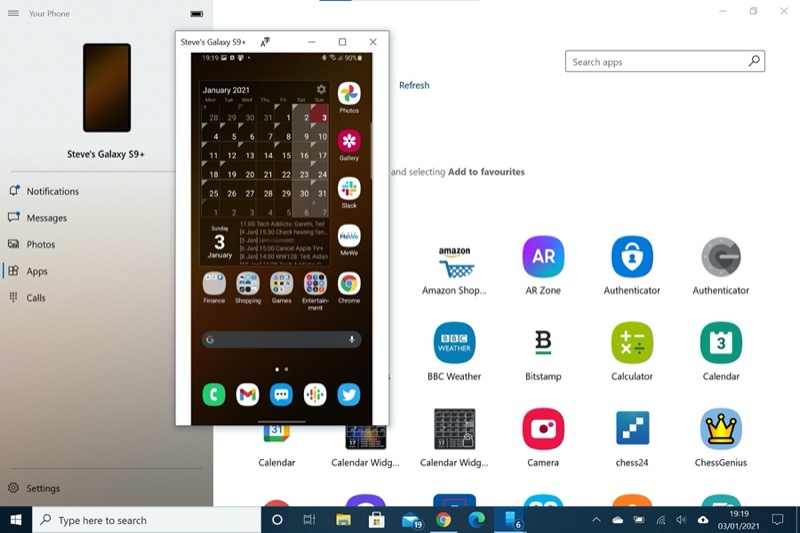 New for recent versions (see the links above) is being able to bring up a virtual phone UI/window and to operate it as if it were a touchscreen smartphone in front of your eyes. So swiping, tapping, long-pressing, and so on. 'Back' is handled by a right click if you have a mouse or trackpad available. 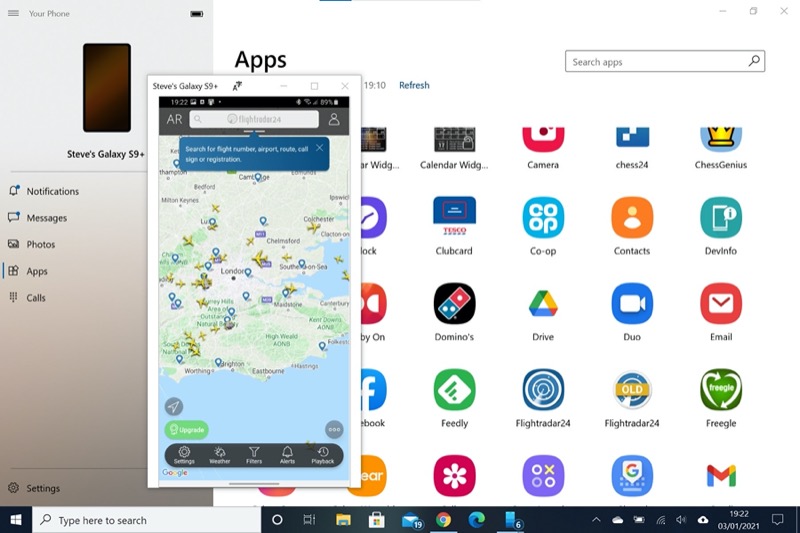 Most applications will run just fine in this window, effectively 'streaming' from the compatible Samsung (Android) smartphone. (The phone will either show the app 'mirrored' or just a greyed out placeholder screen, depending on how the app was coded.) Here I'm browsing Flightradar24... 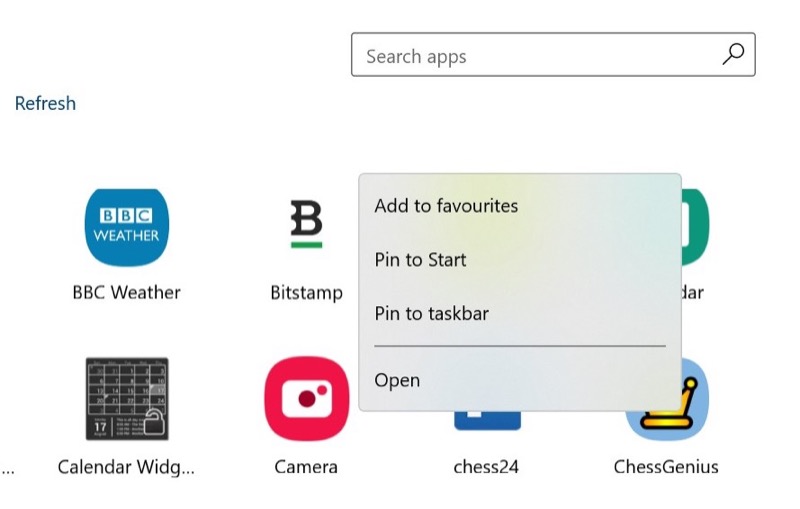 From the apps list on your phone, as presented in Your Phone, a long press or right click shows ways of getting you to an app faster. Here I'm about to 'Pin to start' the game/simulation 'ChessGenius'... 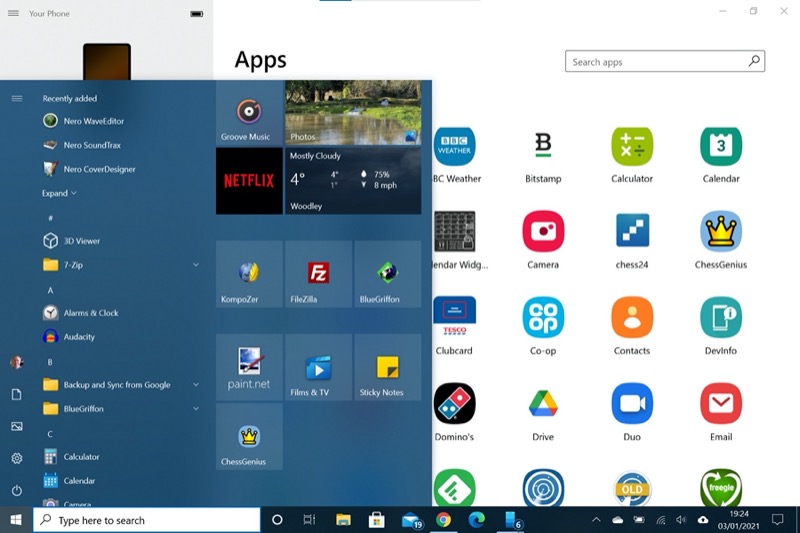 ...and there it is, pinned to my Surface Go Start screen, for easy access. If you tap/click this when Your Phone isn't running, it's - obviously - started up and there's a bit of a delay! 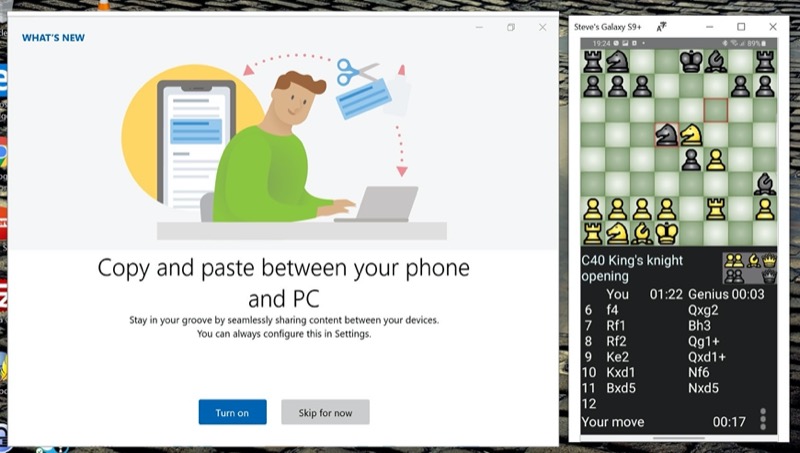 So I've started the game here (and am losing!) - it's running in a floating window (even though it's part of the Your Phone system), with the rest of the main app running through some of the set-up/settings features. Copy and paste between PC and phone (via a signed in Microsoft account) is something that we've enjoyed by various means for a while now, and this is just another way of achieving it. 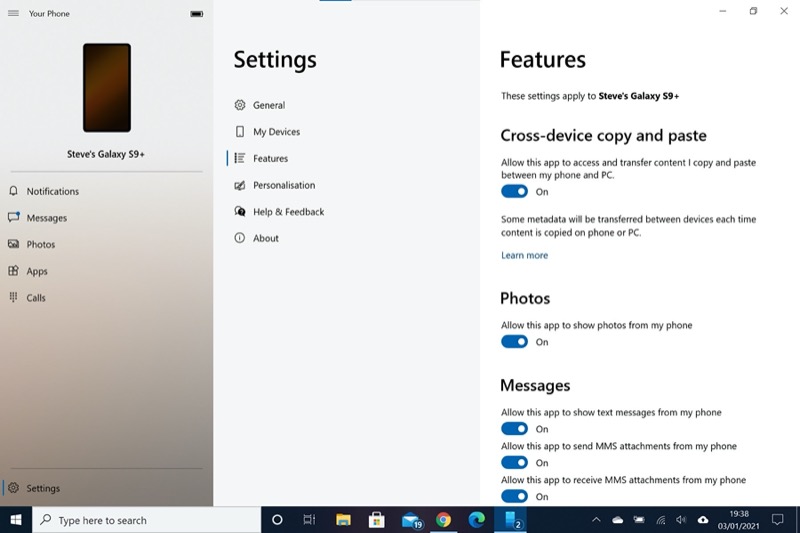 After turning this on, it's worth browsing all the other settings - there's a lot to fiddle with (almost everything is turned on by default though)! 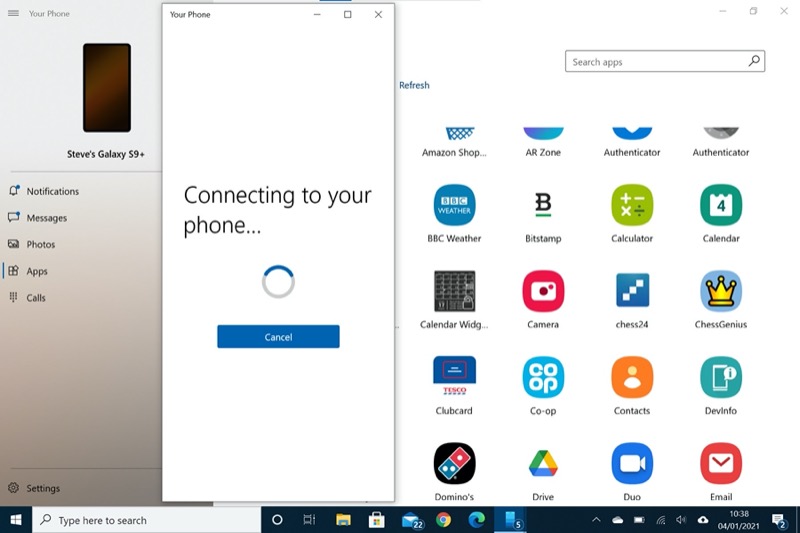 I mentioned a delay above - starting an Android app from the taskbar or Start screen takes upwards of 10 seconds if Your Phone isn't running. Other times, even with Your Phone running, apps can take several seconds to launch. And sometimes they don't launch at all until you've picked up your phone and unlocked/authenticated it - which kind of foils the point, annoyingly.

So that's where we're at with 'Your Phone' right now. It mostly works, mostly quick enough, as long as you keep your compatible smartphone unlocked and powered on. And it really is very cool to see a virtual Android interface in the middle of a Windows desktop. But is it all enough?

Sitting working at a Windows laptop, the use case for all this is that when something happens - a notification of an eBay purchase, a DM from your editor, a Whatsapp message from your partner, and so on - you get to see a pop-up and dismiss it without needing to remove your hands from your keyboard/trackpad or your eyes from the main screen. And if whatever is happening - a message, a call - is really important then in many cases you can deal with it within the Your Phone interface, with large display and full input facilities. Saving picking up the phone and probably replying using the small phone screen.

If the notification is for an app like Twitter or Whatsapp then the idea is that you'd call on this app via the floating windows. But I'd point out that the app streaming function only works with a fairly small percentage of Android handsets. Admittedly we're only looking at professionals here, so perhaps the chances of them using a Samsung flagship are higher than you'd think? But although app streaming is cool (and will get better when the multi-app capability is finally fixed later this year), I also feel it's not the core of Your Phone.

The thing is that we're all different in terms of the web services we use, the Windows apps we depend on, the smartphone apps we love to communicate with, and there are millions of permutations. Microsoft's 'Your Phone' is certainly a very handy tool and its core functions work on almost every current Android smartphone, which is excellent. Turn on Bluetooth and you're golden, etc.

But is the time saved using the system worth the (real world, I timed it) 30 minutes of set-up and general fiddling around (permissions, installs, etc.) to get it all working in the first place? The jury's out on that. You could even argue that it's good to take your eyes and hands away from your computer regularly, so an interruption might be a good thing - take the call or reply to the message while standing up and walking around, etc, get the blood circulating?

And although it's cool to see Android apps like Twitter, Whatsapp, and Facebook running in a window, surely it's far quicker and more convenient to just have these open in tabs in your native Chrome or Edge browser under Windows? So it all comes down to how you want to handle notifications and messaging interruptions in your day - and/or how focussed you need to be when you're working!

Comments welcome - have you used Your Phone, how did you get on, and did you end up keeping it?

PS. In part 2 of this feature I'm going to pitch Your Phone against Samsung DeX for Windows Desktop, for which there's huge functional overlap - what are their pros and cons, and are there any differences in use case?