'Your Phone' vs Samsung DeX for Windows

Last week I looked at how Microsoft's Your Phone system had been evolving over the last 12 months, but I did tease that I wanted to compare it to Samsung's DeX for Windows (or Mac) - both seem to offer functions that have overlap, to say the least. Having established that Your Phone's core features can be helpful but that the concept isn't exactly foolproof or mainstream, is DeX for Windows (or Mac) any better?

Whereas Your Phone passes through selected phone content to a desktop application, DeX for Windows runs - as it sounds - in a window (or full-screen) under Windows and your phone is in full control of the contents, running DeX-compatible Android applications in a windowing desktop environment within Windows itself. I.e. a multi-window environment is itself running in a window in a different OS's multi-window environment! All a little meta, so do see the screenshot examples below, etc.

The best way to compare Your Phone and Samsung DeX for Windows is in a table:

* again, different from the use case when you have only a monitor or lapdock - see other articles and reviews!

Of course, if you have a Windows laptop then you might be best off using other versions of the same apps and services. So, for example, rather than trying to use Twitter, Whatsapp, MeWe, Facebook all on the phone via your DeX-connected Desktop environment, with compromises aplenty - not least that many Android apps don't support changing their running window size - why not just bring up each of these in web browser tabs and keep thing simple? True you'd have to authenticate one extra time when getting started, i.e. on the PC, but thereafter things should be simpler, smoother and more manageable - PCs know how to do web browsers!

Here's a brief look at DeX for Windows in action (thanks to colleague Ted Salmon for aiding me in these screenshots): 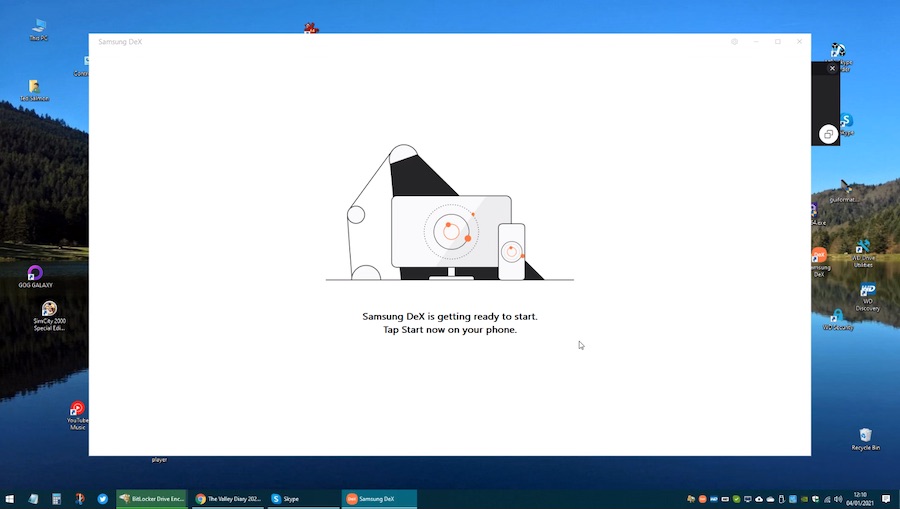 Getting ready to connect. DeX for Windows installed and running. Now connect up a Samsung smartphone and tap on 'Start', to get... 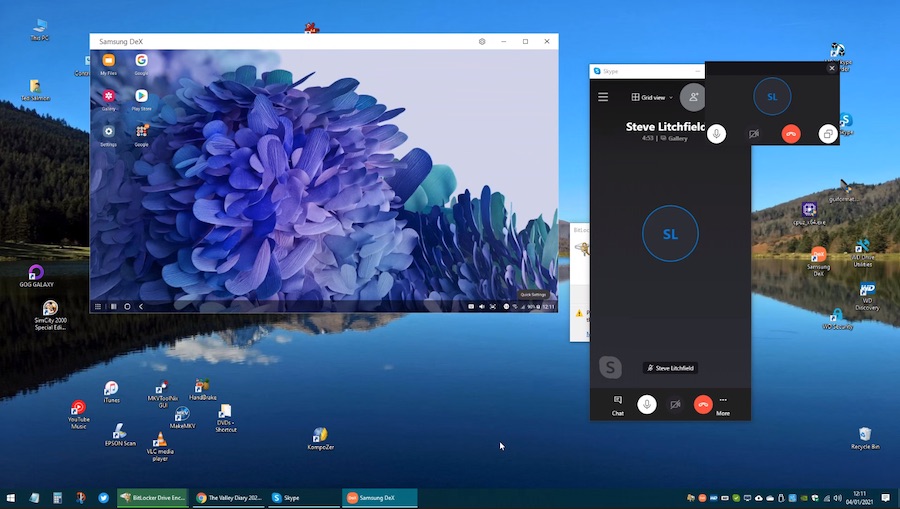 DeX for Windows showing a desktop-like UI that's entirely driven from the phone's processor, storage, and RAM. And it's all running in a window here, to show its part in being 'just another application' as far as Windows is concerned. But the UI is so small that almost all the time you'll maximise the window to go full-screen: 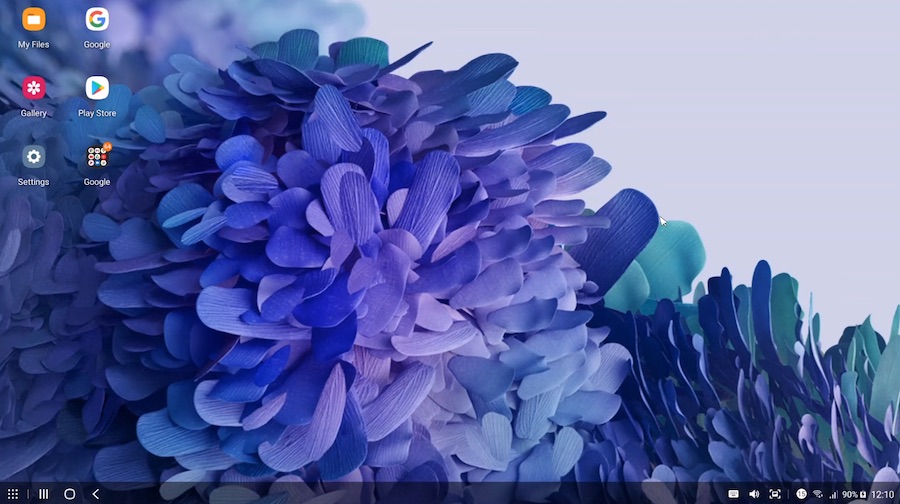 DeX is optimised for (circa) 1080p displays, so full-screen is really the only way to go. Note the desktop-ish look, including shortcut icons and a system tray. On the tray's left, the phone's apps list, recent apps, home, and back. On the tray's right, keyboard, sound, notifications, comms and settings, battery and power, etc. 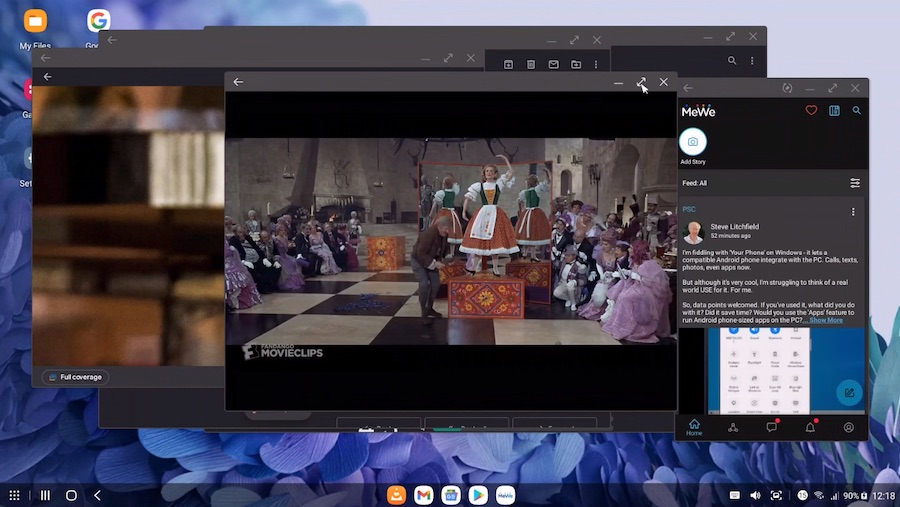 DeX in typical action, here watching a movie from the phone's storage in a window inside DeX, and with MeWe, Gmail, News and the Play Store also open, each in its own window and with most resizeable. Just as with a normal Desktop, running apps are also listed in icon form in the system tray. 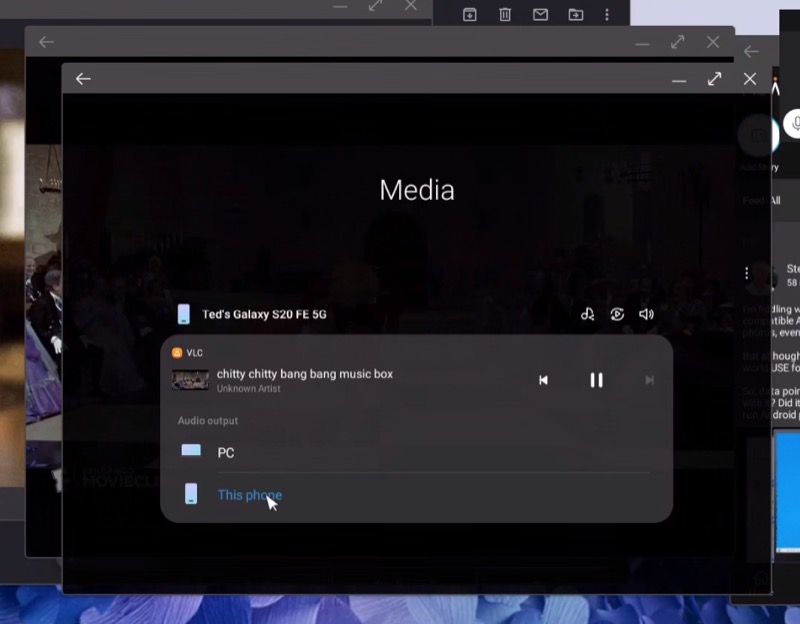 Audio can be redirected between host PC and phone speakers using this dialog, accessed from the system tray. 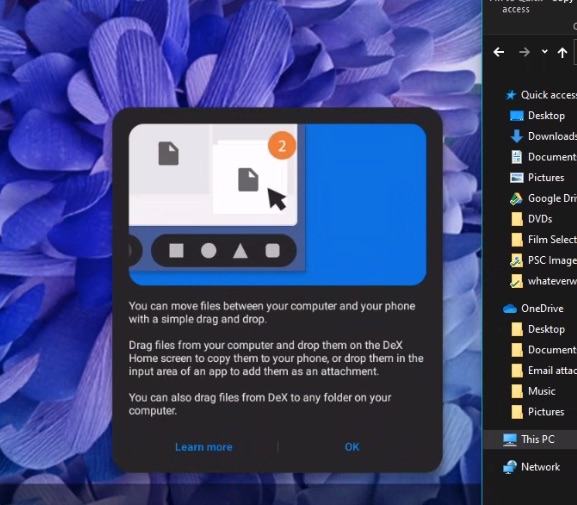 Samsung's dialog here clearly shows that file drag and drop should work in both directions, but it patently doesn't. Yet. Maybe this will change in updates, but currently you can only drag PC files into Downloads on the phone.

That DeX for Windows works at all is impressive. Almost everything on your Samsung smartphone is now on Windows on your PC, albeit inside another windowing system and with some restrictions on display layout. It's faster and smoother than you might think.

But I'm still struggling to find a killer use case for the technology. Microsoft's Continuum (for Windows 10 Mobile) and Samsung's DeX, along with Huawei 'Easy Projection', were all designed to let a phone adopt a connected monitor and input accessories (mouse, keyboard) in order to become a makeshift 'PC' - and for hot desking or simply making do in a hotel room they all work as well as can be expected. (Again, see also my NexDock reviews.) But if you're sitting in front of a genuine Windows PC/laptop then the need to bring up phone applications within Windows is surely fairly minimal? Almost everything your phone has access to, surely Windows and a decent browser like Edge or Chrome can deliver the same content and interactivity even better?

While if your main use for DeX for Windows is to keep an eye on calls and messaging then Microsoft's Your Phone would seem a simpler and more lightweight alternative - it's virtually integrated into Windows 10 at this point, it's also integrated into many Android smartphones and is a simple retrofit, and it's a genuine Windows application that ties into the OS"s notification system.

So, where do you stand on Your Phone versus Samsung DeX (for Windows)? Either/or? Or do without both? Just keep DeX for hubs and lapdocks? Data points and comments from your own tech life welcomed!

Filed: Home > Features > 'Your Phone' vs Samsung DeX for Windows