The image posted to Twitter shows a typically Samsung styled device (plastic front face, small bezel, rounded corners). The overall design is similar to the Samsung ATIV S, with a physical Windows key and capacitive search and back keys. The positioning of the volume controls, front facing camera, and front facing sensors are also in the same as the ATIV S. However, unlike the ATIV S there is no physical camera button (something previously required by Microsoft, but dropped as an absolute requirement in an effort to reduce hardware costs).

While the Samsung Huron is described as being exclusive to Verizon it is likely that Samsung will also release a global variant of the device. This would be equivalent to the release of the Samsung ATIV S and the Samsung ATIV Odyssey last year. 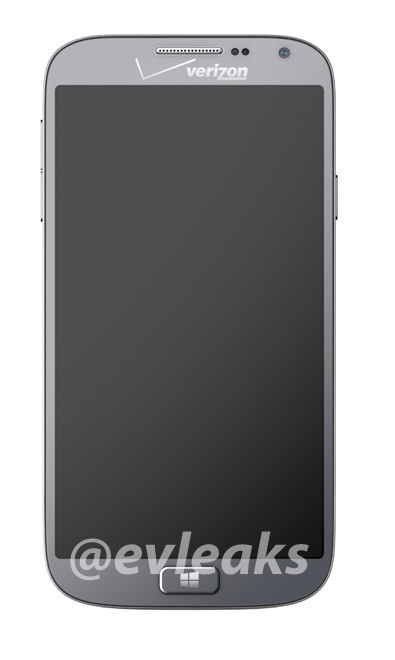 There's little solid information on the new device, but a similarly named device has been spotted by AdDuplex. AdDuplex says the device self reports as having a 4.3 inch 1080 x 1920 resolution screen, though other sources have suggest the device may have a 5.0 inch screen (stepping up from 4.8" 720p Super AMOLED screen on the ATIV S). The device is likely to be running the "new" high end specification for Windows Phone, which is based around a Snapdragon 800 SoC (quad-core 2.2Ghz, 2GB RAM).

The timing for the announcement and release of the device is open to speculation. Running Windows Phone 8.1 would suggest an arrival date from the end of April onwards, but it is possible the device could be announced and/or made available at an earlier date and upgraded to the newer Windows Phone release once it becomes available.