Following on from our first four review parts and various features on the HP Elite X3, we now have the production Lap Dock in house - here's our annotated image gallery of the latter. Of course, there will be a full review along very shortly - after enough time 'on the road'!

Beautifully presented in a deluxe box made from thick and glossy cardboard, but then what else would you expect for well over £500? Yes, that's right, you can close your jaw now - I said 'well over £500' - and that IS just the dock, there's no phone included. Gulp. In fairness, the ex-VAT price is sub-£500 and buying in multiples, businesses could probably negotiate closer to £400. How much is the Elite x3 Lap Dock really worth? You'll have to wait for my full review here on AAWP to find that out!

Included is a USB C-to-C cable (for hooking up the x3 or any other Continuum-compatible, Type C-using smartphone), a USB-A to C dongle (for connecting up a wired mouse if that's your preference, or perhaps for a USB hard disk - more on that in my review), and a sturdy and long two-part power lead. 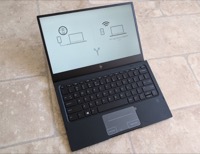 Opening up the Lap Dock reveals an impressive 1080p LCD screen, almost bezel-less - this is one nice piece of kit. Booting up the Lap Dock takes around 15 seconds, following which you're faced with a visual prompt to plug in or connect wirelessly. You have to boot surprisingly often from a shutdown state (i.e. when closing the lid), I'll comment more on this after more testing, in my forthcoming review.

The trackpad is nice and large, but doesn't have quite the same premium feel as the rest of the accessory. The whole pad is hinged at the top and the bottom two corners have the main buttons/contacts. We'll see how it stands up to day to day life shortly... As shown here, when initially unboxed, there's a helpful sticker over the track pad.

The keyboard is first class, with good key travel and backlighting with three brightness levels (off/low/high), selectable using a dedicated function key on the top row. Also on the top row are media controls, volume and more, though not all worked properly in my initial testing. More  here in due course - I get the feeling that a firmware update is due to hit the HP x3 Lap Dock shortly...

The bottom of the screen section acts as a prop/stand for the keyboard - not a totally new idea and it works very well, with the screen staying put at almost any angle on the review sample. It folds open to around 135 degrees, which is impressive.

On the left edge are micro HDMI (for hooking up a larger monitor), a USB Type C port for hooking up a compatible smartphone (this works just as well with the Lumia 950 range as with the Elite x3) or for charging the Lap Dock, plus a power button to initiate booting or resuming from a sleep state, typically.

On the right are a couple of extra USB Type C ports, for hooking up a mouse or storage device, or for charging the Lap Dock from this side. Plus a button to set off a charge state animation across four little LEDs.

On the bottom on either side are what look like dual speaker cones - smallish, but way better than those in the Elite x3 itself. I booted up some YouTube music videos and had a blast. Of course, such entertainment isn't quite what HP had in mind for the business-focussed Lap Dock, so let's call it high quality video conference sound!

Two hard rubber bumpers sit astride the chromed back edge, with the idea that these will take the brunt of the load when the Lap Dock is resting on a desk, and thus not mess up the nice shiny chrome. This they do, though the bumper edges are quite sharp and can be painful when the Lap Dock is sitting on, well, a lap! Or maybe my trousers are too thin!!

The bottom comes off the Lap Dock fairly easily with 9 Torx screws - the user will never have to do this, but I wanted to establish exactly where everything was inside - turns out that the battery is simply enormous. More on this in my full review.

In use! - A full multi-part review is in progress and should be found under AAWP's 'Reviews' section.

Worth noting during my first 24 hours with the Elite x3 Lap Dock is that I experienced numerous lock ups, blank screens, missing mouse cursors, and so forth. When I switched to the Redstone 2-running Lumia 950 XL, things were slightly more reliable, but I get the feeling that not only will the x3 itself need to be on the Creator's Update but the Lap Dock firmware itself will need a truck load of bug fixes before this hits production users out there in real world businesses. All very frustrating, though it's trivial to update the Lap Dock firmware from the HP Device Hub utility on the x3 - so we're just waiting on HP's engineers, it seems.