Of iris scanning and innovation: Lumia and Galaxy Note 7

I'm sure many people will have spotted that Samsung has introduced 'iris scanning' for its brand new top of the range £700 Galaxy Note 7, to be available soon. Ignore all the claims that it's 'innovative' though, the (now much) cheaper Lumia 950 and 950 XL had this nine months ago. What got me musing though was why Microsoft's implementation wasn't seen as ground breaking in the first place. Why should that be?

Anyone with a Lumia 950 or 950 XL will have given the iris scanning option for 'Windows Hello' a try on their phone. Chances are that you set it up and eventually turned it off as 'too slow' or not reliable enough - if the recognition fails even one time in ten then it's frustrating and you might as well use a PIN.

But let's start with Samsung's impementation, shown off in their B-roll video below - watch this before I comment further:

So the basics are identical - a training session in which the user has to remove any glasses, line up properly and then gaze at the top of the phone, followed by an unlock procedure that relies on proper alignment and gaze again, with a recognition speed of around a second after that. Samsung's video goes into extra detail regarding specific content on the phone which can be 'locked' or unlocked with the iris recongition, but the basics are all the same. Samsung's video also doesn't show the recognition being retrained with glasses on, though I'd assume that the same principles apply as on Microsoft's implementation back in 2015. 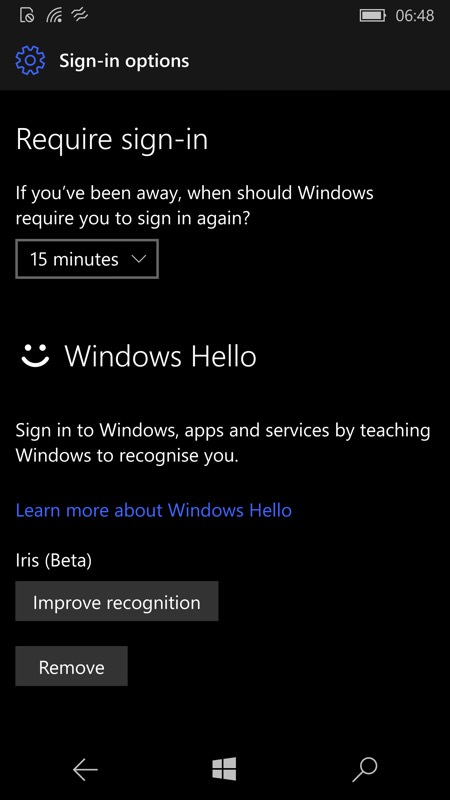 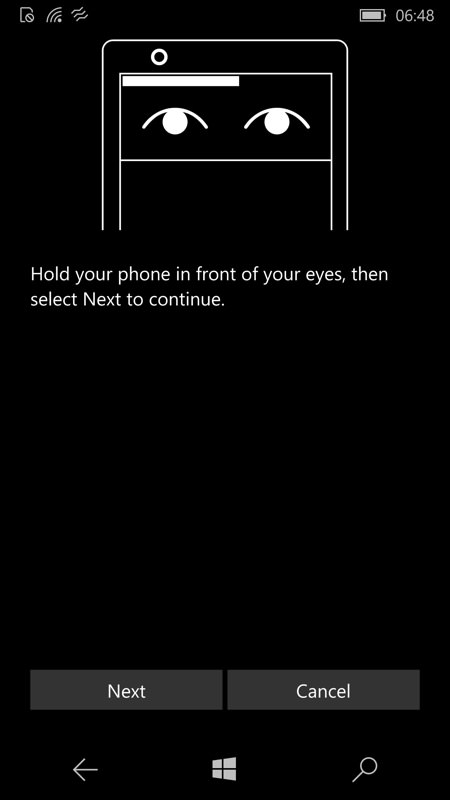 Even if already 'trained', popping back into your sign-in settings gives the chance to keep 'Improving recognition', essentially adding more slight variations to your iris signature. 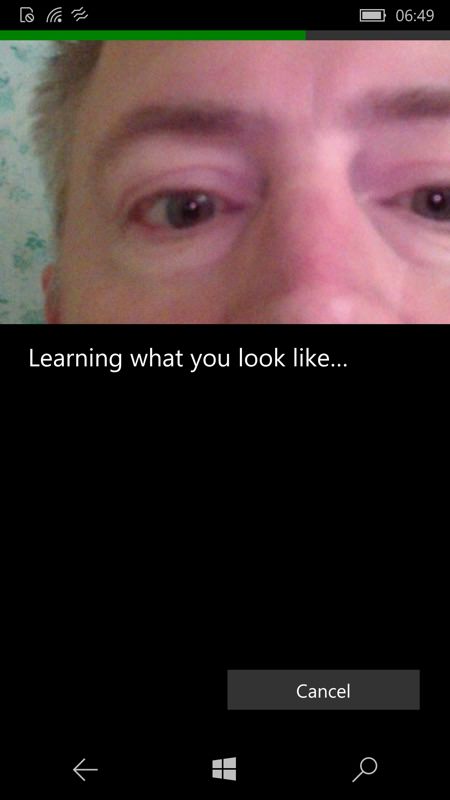 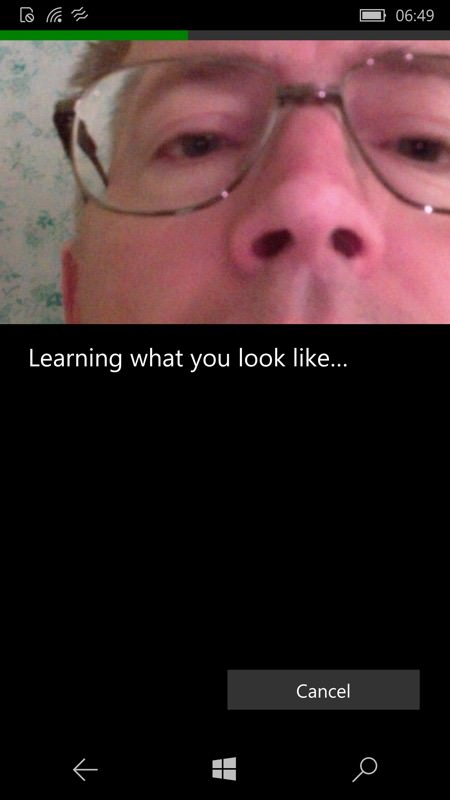 Training with and without glasses. As you can see, with varifocals it's usually necessary to tilt the head backwards so that you're looking through the 'near' part of the spectacle lenses! 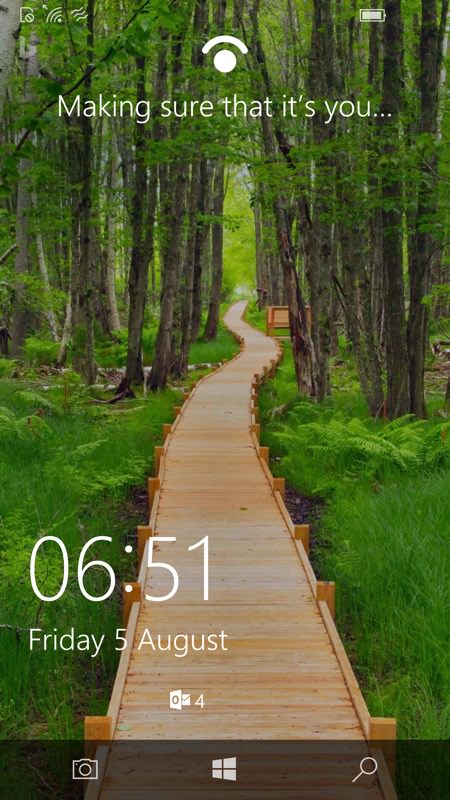 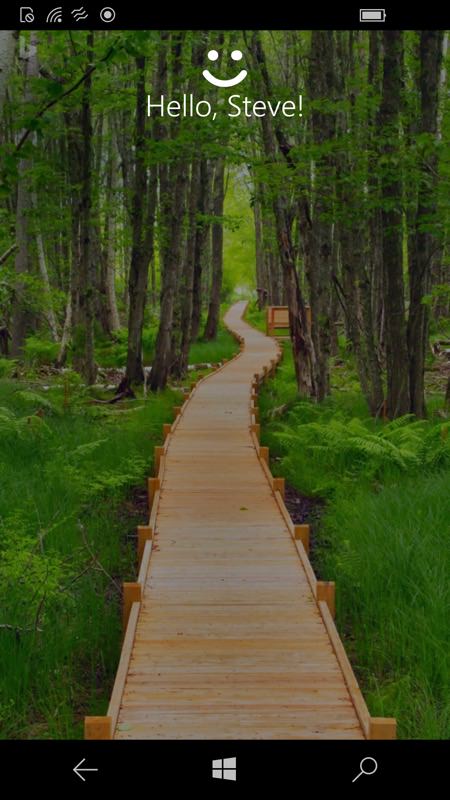 Great to be informed, Microsoft, but we get the idea. Now give us the chance to skip the message and animations and let's speed the sign-in process up!

The second point above can still be addressed though, in a Windows 10 Mobile fix/update - I'd very much like to see this happen. With recognition down to a second it would be genuinely useable. And all it takes from Microsoft is to NOT display a couple of on-screen messages/animations.

The imminent HP Elite X3 gets things right with both a fingerprint scanner (on the back) and iris recognition, of course. At a price, but it shows where Microsoft could have gone in this regard.

Having said all this, iris recognition will never - I predict - rise to the same level of ubiquity as fingerprint authentication. It's handy as a second string means, but it's not always convenient to physically raise your phone in front of your eyes, plus that second's delay (at least - this doesn't include time to raise the phone and make sure your eyes aren't blinking and without glasses, etc.) will never get remotely close to the few milliseconds needed to read a fingerprint on a digit which is already part of the motion of picking up a phone from a desk.

So take the whole current 'innovative iris recognition' hype with a pinch of salt. It's not that innovative, it's not that fast, it's not going to take over from fingerprint scanning in the wider smartphone world. It's merely 'quite cool'. Which is fine for geeks like us, but it's not going to catch on or be practical for the general populace.

Still.... Microsoft, if you're reading this, what about sticking that extra setting in, eh? Pretty please! 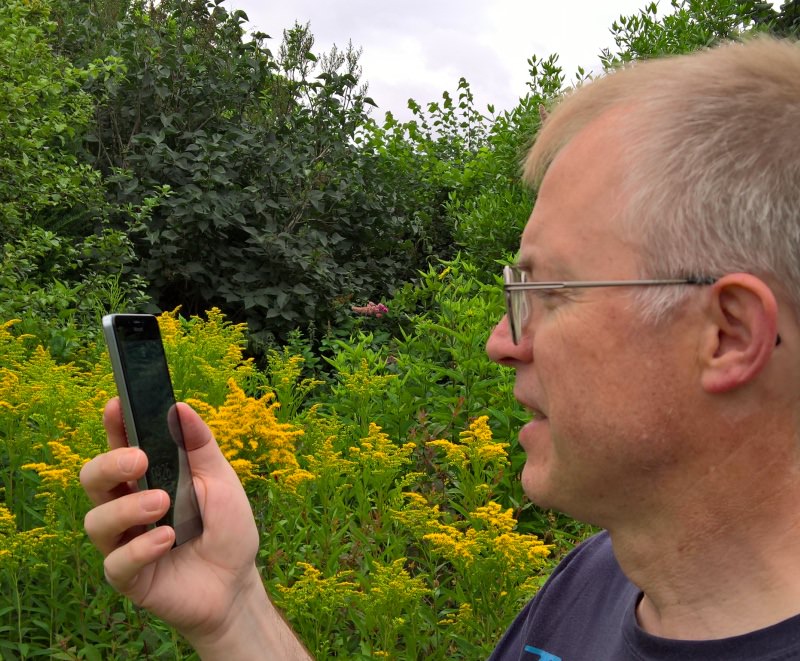