Benchmarking the Snapdragon generations that are used in Windows on phones

On the eve of general availability of the latest* flagship for Windows 10 Mobile across Europe and the wider world, it seems appropriate to recognise the significance of the Alcatel IDOL 4 Pro's chipset and where it fits into the wider picture of Snapdragon chipsets used in Windows on phones through the last five years. Will the extra power make much difference?

* 'latest' is accurate from a Windows Phone/Windows 10 Mobile perspective, since the Alcatel IDOL 4 Pro is brand new in Europe (and beyond) as of tomorrow (July 26th 2017), but pedants will note that it's based on a reference design from OEM TCL (in China) from 2016 and that it's also a sister smartphone to the cumbersomely-named 'IDOL 4S with Windows 10' that was exclusive to T-Mobile in the USA at the end of 2016. So, in this case, 'latest' can also be taken somewhat ironically!

One of the tenets of Windows Phone over the years has been that you got a smoother, faster interface than you'd get with a rival OS running on the same hardware. So, for example, the ultra-budget Lumia 520 with its lowly Snapdragon S4 MSM8227 chipset would have been an absolute dog if asked to run Android OS, but it provided a pretty smooth, zero-lag interface on Windows Phone 8.1, back in 2013. And it sold tens of millions as a result.

Things change fast in the phone world, though. While Windows Phone 8 has evolved into Windows 10 Mobile (via an upgrade for mid-range and top end models), which (though more capable) runs significantly slower, the competition has moved the other way, with even budget (sub £100 in the UK) Android smartphones offering a slick interface and negligible lag.

So the advantage of being smoother and faster has been lost, certainly when looking at Windows 10 Mobile-running handsets. In fact, for most operations iOS and Android are faster than the smartphones covered on AAWP, even with the latest, faster Windows 10 Creators Update on board. And we find ourselves looking at ever faster Windows handsets in order to keep the interface and applications snappy. The super-expensive HP Elite x3 (especially if you buy into needing the Lap Dock), from 2016, was the first to use a Snapdragon 820 (and 4GB RAM), but the brand new Alcatel IDOL 4 Pro matches it and at a far more sensible price (£420 in the UK and similar amounts in Euros throughout Europe).

So how much faster is this new breed of Windows 10 Mobile smartphone, i.e. compared to the previous generations - Lumia 930, 950, etc? With my review (retail) IDOL 4 Pro imminent, I'm going to be doing some serious real world benchmarking, of course. But I wanted to preface all this testing with a look at the raw chipsets and how they compare in terms of capability. And, given that the popular Geekbench 4 benchmarking software doesn't run on the phones shown below, I'm going to cheat slightly and look at the best scores achieved for each chipset under stock (or a lightly skinned) Android - I'm not really interested in comparing OS speed here, I simply want the relative 'deltas' from chipset to chipset - and I thought you'd be interested in the chart below too. 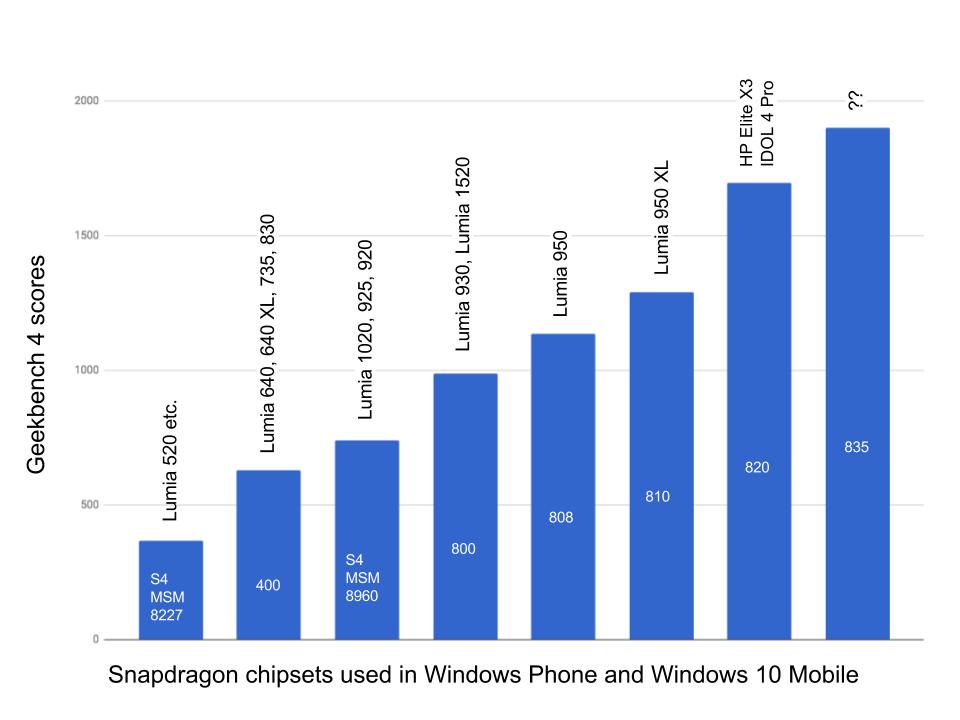 And so we have the Lumia 930 and 1520 as perhaps the best known reference point from the models quoted above. Almost everyone reading this article has had one of the two at some point in the last three years. And, conveniently, the Snapdragon 800 chipset (paired with 2GB RAM on these two phones) sits slap bang in the middle of the performance scale. We can see that the 930 and 1520 performed, at best, around 50% better than the previous generation of Windows Phone 8.1 handsets and roughly 2-3 times better than all the budget Lumias, depending on model.

Now, there's also the question of Windows Phone 8.1 versus Windows 10 Mobile, so it's hard to accurately estimate relative speed between 8.1-running phones and those which have been upgraded to the newer, more ambitious OS. For example, I have a Lumia 735 here running 8.1 and it's arguably snappier than my 930 running the latest Windows 10 Mobile Creators Update.

So... let's restrict ourselves now to just the newer OS, the one with Skype support and better long term prospects, the OS that hasn't just been declared End Of Life by Microsoft. Of the eight chipsets shown above, only the two S4 models can't be used officially with Windows 10 Mobile. The other six power handsets for which the update is official. Which means that for these six chipset families and related handsets, we can compare like with like.

Taking the Lumia 930 and 1520 as my baseline then, roughly twice as fast as the less expensive 640/735/830 devices, the Lumia 950 should be about 15% faster and this feels right - certainly I've noted that my 930 feels almost as snappy under Windows 10 Mobile, making it an excellent way to experience the newer OS without needing new hardware.

But the Snapdragon 810 in the Lumia 950 XL raises the bar significantly, with over 50% better raw performance than the 930/1520, enough to really notice the difference, even with Windows' transitions throughout the UI. And now the Snapdragon 820 in the Alcatel IDOL 4 Pro (and Elite x3 before it) is up at around a 75% performance bump, so smoother and faster again.

Which is... a little underwhelming, interesting though the chart and these stats are. (Even the next generation of Windows on mobile, in 2018, running on the Snapdragon 835 chipset, won't even be twice as fast as that humble Lumia 930 from 2014.)

There are various ways of looking at performance, of course. One is to say that the likes of the IDOL 4 Pro (running Windows 10 Mobile Creators Update) will still only be slightly faster than a Lumia 930 running Windows Phone 8.1 from three years ago, so where's the progress? Another is to point out that the new OS is more heavyweight, accomplishing more, allowing applications with much more functionality (right up to UWP compatibility with desktop PCs), and to be able to run all this faster than the old 8.1 flagships means that there's a big net gain.

Your comments welcome, of course - did anything about the relative performance factors in the chart surprise you?

Filed: Home > Features > Benchmarking the Snapdragon generations that are used in Windows on phones