When I'm using Windows 10 Mobile full time, I can truthfully say  that the OS and its applications satisfy all my smartphone 'needs', but there's a huge caveat implied. 'Needs', after all, implies 'necessities', the basics that have to be in place in order for a smartphone to be a smartphone. I get by - I even enjoy the phone and the UI. But there's an unstated reach that lets those with other mobile OS go further, whether its paying for things with their phone in a shop, playing the latest blockbuster games, or streaming video from a particular commercial movie service. Below, I chart the shortfall - how critical is it to you?

It's fair to say that the number of high quality UWP applications for Windows 10 will surprise you - here's our curated directory. But even so, this number is a veritable drop in the bucket compared to the app selection (both good and bad) for iOS and Android. Now, I'd contend that there's less rubbish produced in UWP form for Windows 10, mainly because the developers still working in his world are genuine enthusiasts and committed to making things as good as they can be. But the numbers and coverage across all app genres and subjects is still some way short of what most people would consider '100%', i.e. when they'd find everything they'd look for.

In drawing up the chart below, it should also be acknowledged that in many cases applications aren't always 'first party' (e.g. for a service) and are often made by a third party with access to public APIs. This doesn't actually matter in itself and in many cases produces a superior experience (think Tweetium rather than Twitter, for example), but it does hinder discoverability in the Store. 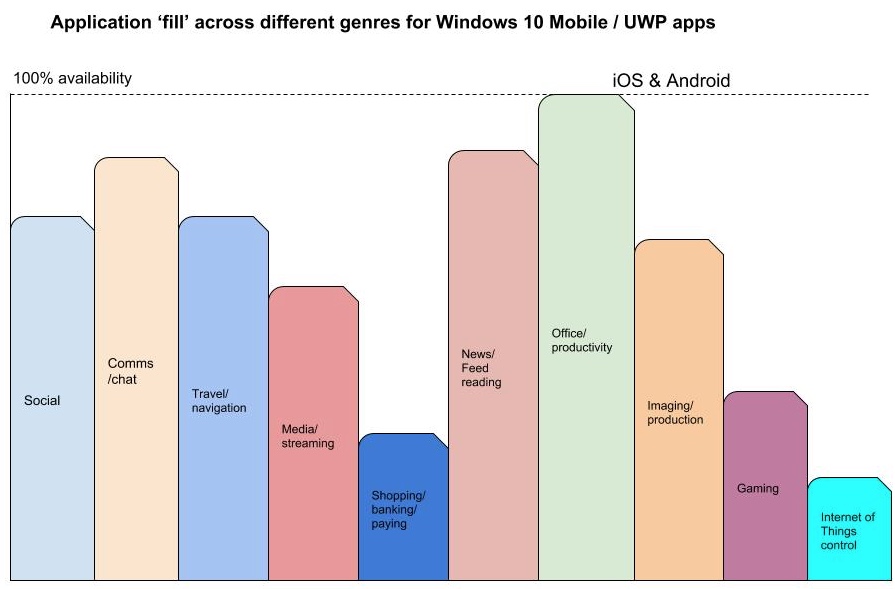 I'd argue that the only area where Windows 10 Mobile really matches the competition is Office, which is perhaps what you'd expect given Microsoft's dominance with Word, Excel, Powerpoint, OneNote, Outlook, SharePoint, and more. And even here new features are being grafted onto the iOS and Android versions at an impressive rate.

Weakest of all is (as mentioned in the comments below) Internet of Things integration. IoT is very new on the world stage and Windows on phones largely predates it. This isn't an issue for (possibly) the majority of people who have no IoT devices, but I do recognise that this is taking off in terms of popularity and that lack of IoT support will be more of an issue in the coming years if people choose to hang onto older (Windows) phones.

But you'll know most of this already. The question is how much the shortfall affects you personally in terms of what you want to do with a phone. I've seen numerous people say that they're worried about the increasing extra reliance on their smartphone and a single, complex, fragile point of failure, so perhaps less is more in this regard?

Comments welcome - I doubt the 'fill' above will grow and in all probability it will shrink slightly over the next year, but how much will it affect you?