The monthly AdDuplex stats for Windows Phone, gathered from a snapshot of thousands of in-app ad impressions in applications for the platform, always make interesting reading. Not least because this time round there's a tangible glimpse of just how many users are 'enthusiasts' and have already grabbed the 'Preview for Developers'...

Some selected highlights from the latest AdDuplex report. First of all, the methodology for gathering data:

This report is based on data collected from 3886 Windows Phone apps running AdDuplex SDK v.2. The raw data analyzed was collected over the day of April 17th, 2014 (UTC time) unless otherwise stated.

It's certainly a valid means of gathering data, but doesn't, of course, tell the whole picture, since it's based on ad-supported third party applications - there are many Windows Phone users happily using built-in, freeware or commercial applications who won't show up at all in AdDuplex's reports.

With that said, a few quotes: 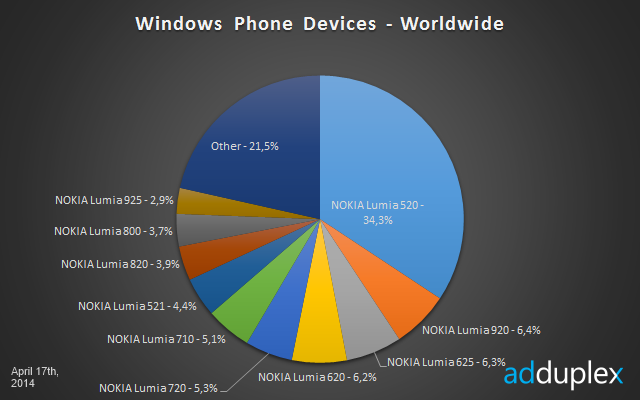 This could very well be the first month since Lumia 520 release almost a year ago when it stopped growing. Theoretically, it even shrank a bit, but that could be attributed to statistical inaccuracy, rather than dramatic changes in the market. Same goes for the next 3 models in the Top-10. They swapped places, but they were (and are) pretty close to one another to make any conclusions. Having said that, it is clear that both Lumia 920 is at the end of its lifecycle, soon to be replaced by the new +10 sibling. So it’s quite possible that the remaining inventories are being sold at very competitive prices and that contributed to a sudden return of 920 to the second spot. The only other notable change is that Lumia 610 is finally out of the top and Lumia 925 is finally in.

Bearing in mind what I said above, the preponderance of budget models in the pie chart is no doubt helped by the mindset of those using applications supported by in-app ads. I.e. those short of cash will usually opt to keep the app free and with ads, while those who can afford it will often pay to remove ads or buy a commercial version in the first place. Having said that, the Lumia 520 is incredible value for money and it's no surprise to see it topping the table for the umpteenth month running.

What was surprising to me was that the old Windows Phone 7.x devices, the Lumia 800 and 710, from 2011, two and a half years ago, still accounted for almost ten percent of AdDuplex stats on usage. With the jump to Windows Phone 8 eighteen months ago and with the variety of hardware at a wide range of price points, the presence of the 800 and the 710 in 2014 surely points to something that we've been saying for years: that Windows Phone is a great OS for smartphone beginners or for those who don't want to push the boundaries in the same way as power users. Such people may be perfectly content with how their 2.5 year old smartphone works, though I'd be very surprised if any of them were reading this on AAWP!

The report goes on: 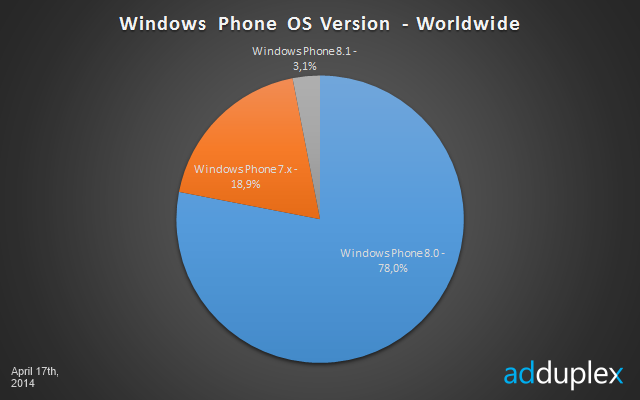 As you can see, 3.1% are already on Windows Phone 8.1 and since this sample was taken about a week after 8.1 became available to developers, we can assume that 3% represents the share of Windows Phone enthusiasts among the whole user base.

I'm staggered. 3.1% is a lot in the context of a 'preview' version of the platform that's supposed to be used by developers only. Yes, you and I are power users and have probably signed up as a 'developer' and upgraded at least one of our Windows Phone handsets, but we are, it seems, in good company. Assuming that there are around fifty million Windows Phones in use around the world, and excluding a few thousand actual developers, that's still roughly one and a half million Windows Phone power users and enthusiasts, people so excited by the update that they jumped through a few hoops to install it, bugs and all. Exciting times.

The report goes on to break these stats down by region and you can find the whole article here.