More than 35,000 content items (apps and games) have now been published to the Windows Phone Marketplace. Between 80 and 150 items are being added every day, of which 18% are games and 72% are apps. Just under 50% of these are free, 19% are paid with a trial and 30% are paid only. It took Microsoft just over a year to reach this milestone, a figure that compares well with competing application stores.

At the time of writing 36,380 items have been published. There are currently 9,781 publishers represented in the Windows Phone Marketplace. You can see all of the applications and games in our Apps & Games section. 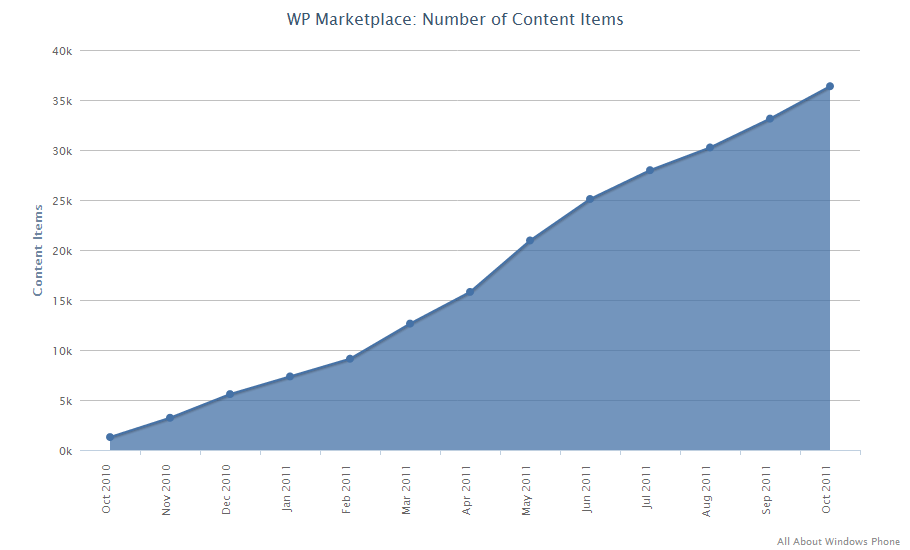 An average of around 100 content items are added each day, although there is a significant amount of variation. In recent weeks, this number has started to creep upwards, roughly co-inciding with the launch of Mango. The end of the quiet summer season may also be a factor. For example, 1,240 content items were added to the Windows Phone Marketplace last week. The graph below shows the number of content items added each week for the last three months. 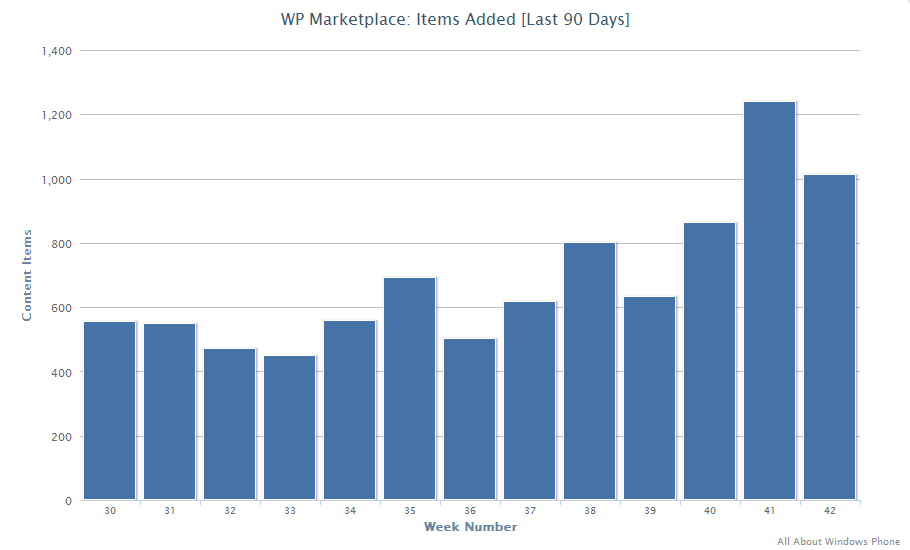 There are more than 500,000 items in Apple's App Store, 300,000 in Google's Android Marketplace and 50,000 in Nokia Store. Windows Phone Marketplace is in fourth place, ahead of Blackberry App Word and a raft of smaller application stores.

The majority of these app stores hold items for more than one device or platform configuration. The most obvious of these is the divide between tablets and phones, but this can also apply to platform versions. For example, Nokia Store covers MeeGo, Series 40, and every version of Symbian.

In the case of the Nokia Store, a more meaningful comparison is to look at Symbian^3 applications - for which the total number of items is just over 25,000 (18,000 if you exclude wallpapers, themes and ringtones).

The total number of apps in each store holds a lot of perception weight and there's no doubt iOS and Android are a long way ahead in terms of application availability. However, an interesting comparison is to look at numbers for the first year of each of the application stores.

The market for, and awareness of, apps has exploded in the last few years, which means it should be easier for Windows Phone to have a bigger first year than its competitors. Nonetheless, the first year comparison is encouraging for Windows Phone Marketplace, suggesting it is growing at a healthy rate.

For the Windows Phone Marketplace, much will now depend on what happens in the next year. Both iOS and Android grew rapidly in their second year, reaching 230,000 and 100,000 items respectively. With Nokia devices on the horizon, there's a big opportunity for Windows Phone to follow suit.