Having been looking so far in detail at Windows 10 Mobile performance and issues on the fastest Snapdragon 800-powered devices, the Lumia 930 and 1520, I thought it time to check out how the OS was faring on something with a Snapdragon 400, in this case the otherwise pretty decent Lumia 830, with 720p screen and 1GB of RAM. In fact, the 830 isn't being made anymore, with a new breed of similarly specced budget devices coming up on its heels, but it's still a good test case for how Windows 10 Mobile will fare with less horsepower under the hood. 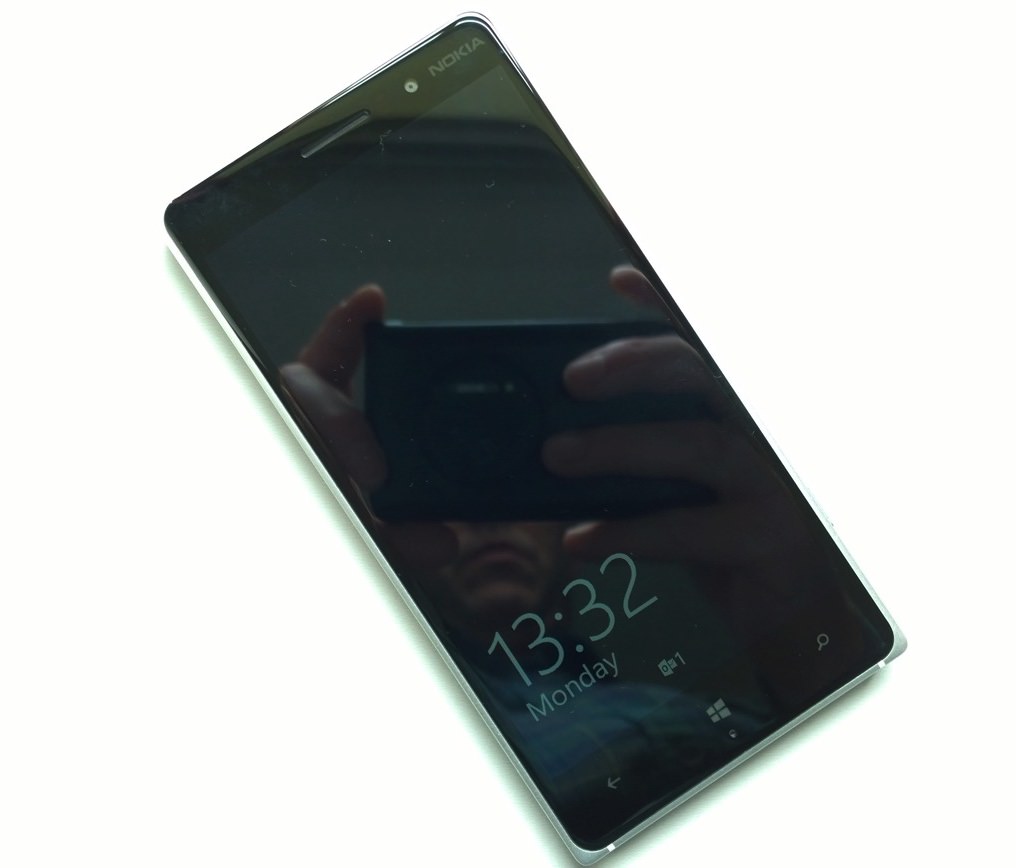 The procedure for getting the latest Insider Preview of Windows 10 Mobile is exactly the same as on other devices, of course, following my own detailed upgrade tutorial here. As usual, once upgraded, there were a truck load of core and ancillary applications that the Store wanted to install - these took a good 30 minutes to get into place, not helped by a new version of the Store itself being one of them - so at some point the whole install queue disappears - but eventually it's all done. 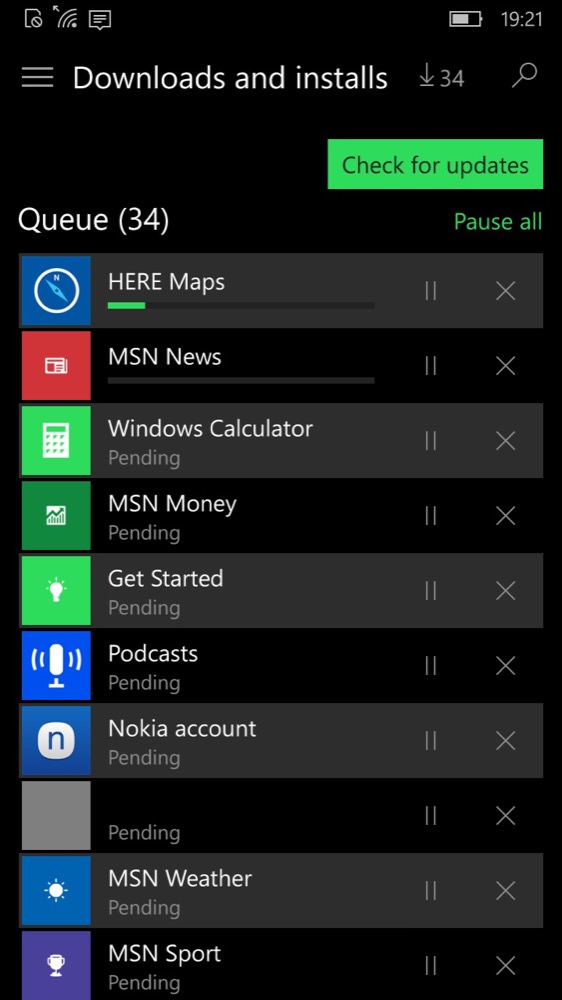 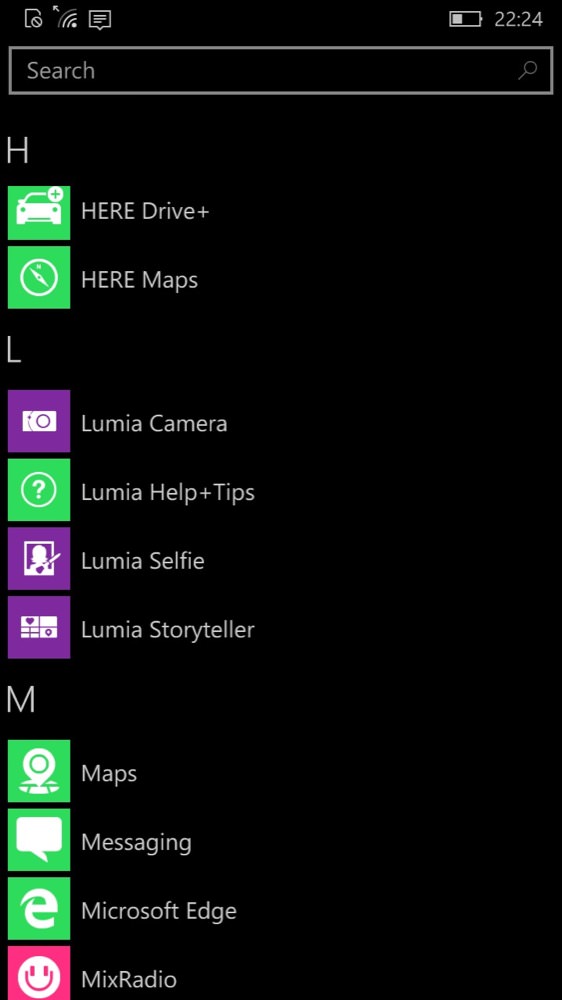 Of particular note is that there are still a lot of the original Nokia applications (e.g. HERE Maps, Lumia Selfie, MixRadio) that are associated with the phone and which get installed whether they're needed or not. I'm guessing these will be removed from the provisioning database for many devices before Windows 10 Mobile rolls out to existing devices at the end of the year. Of course, some applications will still be available in the Store, but there's no reason why most of them should still be installed by default.

One of the first things I noticed was that Glance screen was still working, and heading into Settings its there under 'Extras' (unlike on the Glance-compatible Lumia 1520): 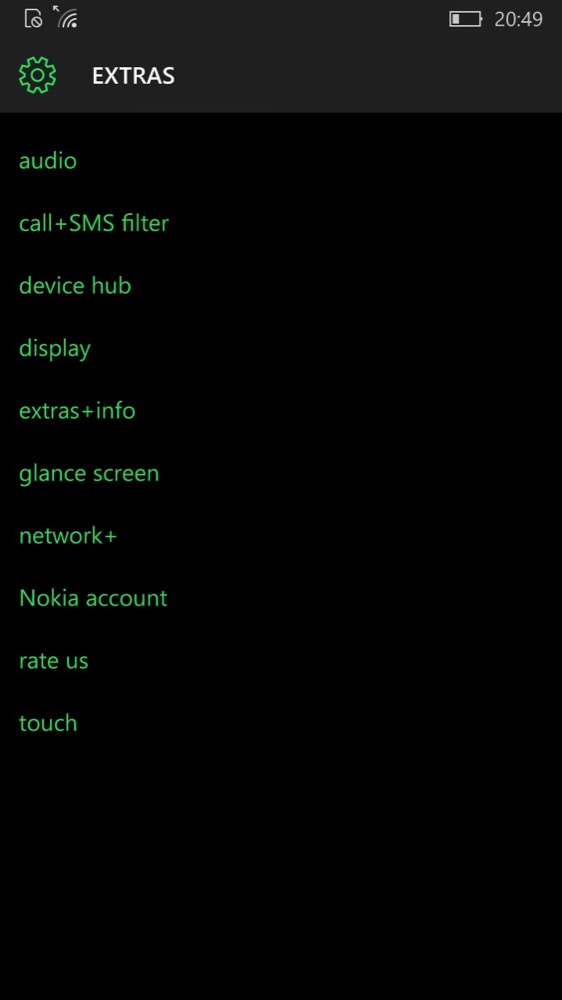 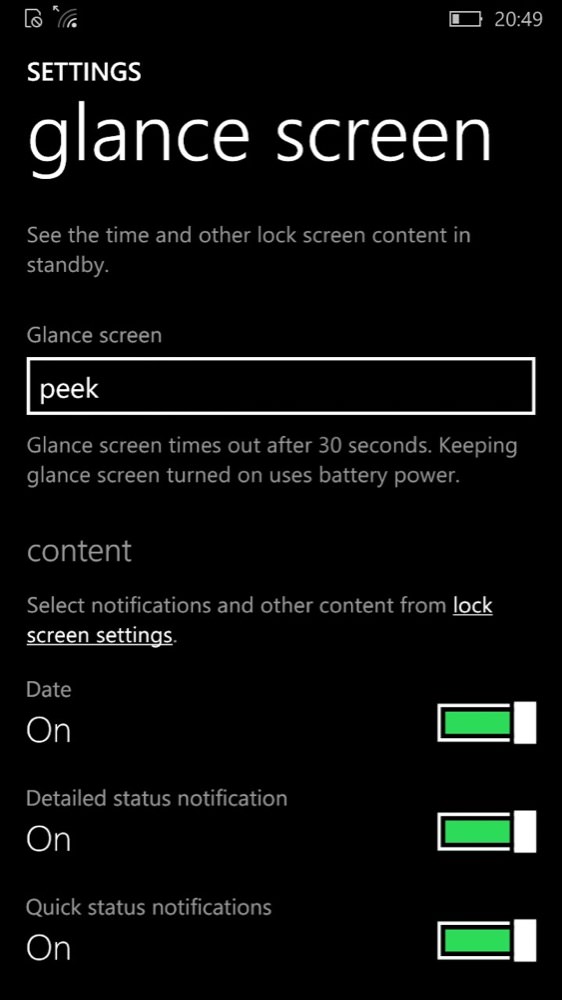 In fact, almost everything seemed to be present and correct - the exception being being able to set 'Weather' as my lockscreen - so I contented myself with the Bing image of the day: 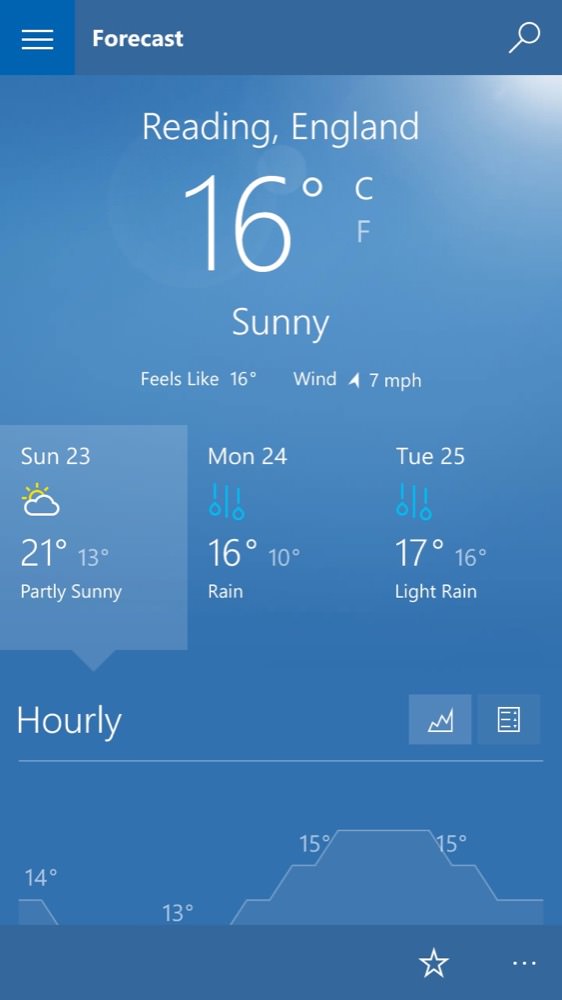 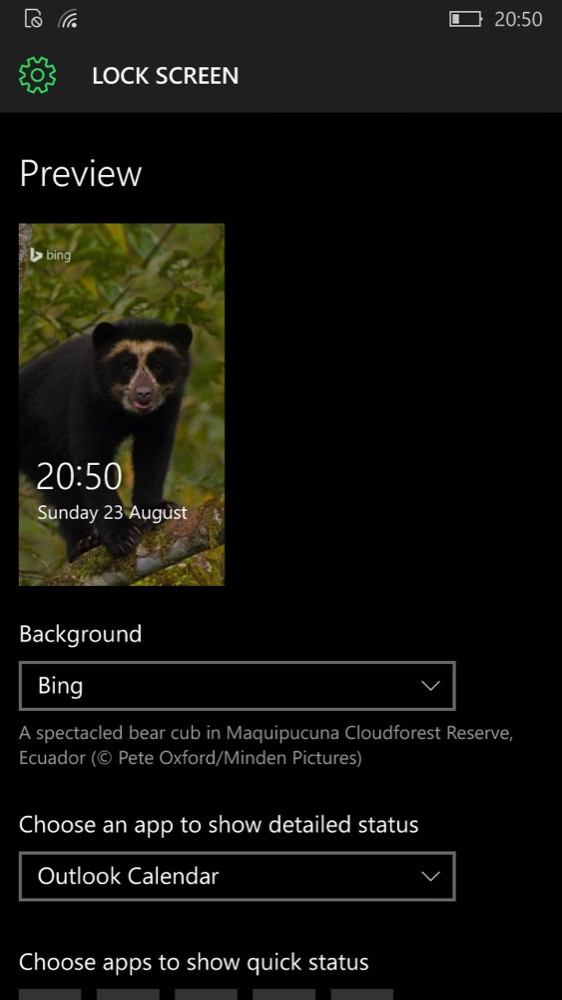 There's clearly some work to do in terms of joining up all the dots for Microsoft here - an unfortunate phrase considering the 'busy' animation, perhaps!

I also headed for Camera on the 830, this being a big interest of mine, and found that, interestingly, there was no 4:3 option anymore, but having RAW (DNG) as an option will please some people, since the default JPG compression and processing isn't to everyone's tastes. 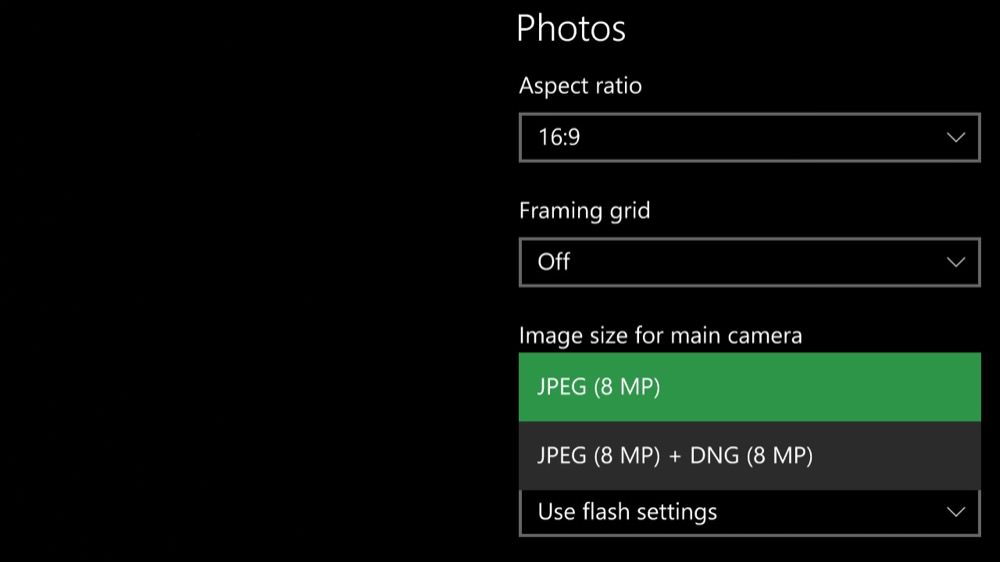 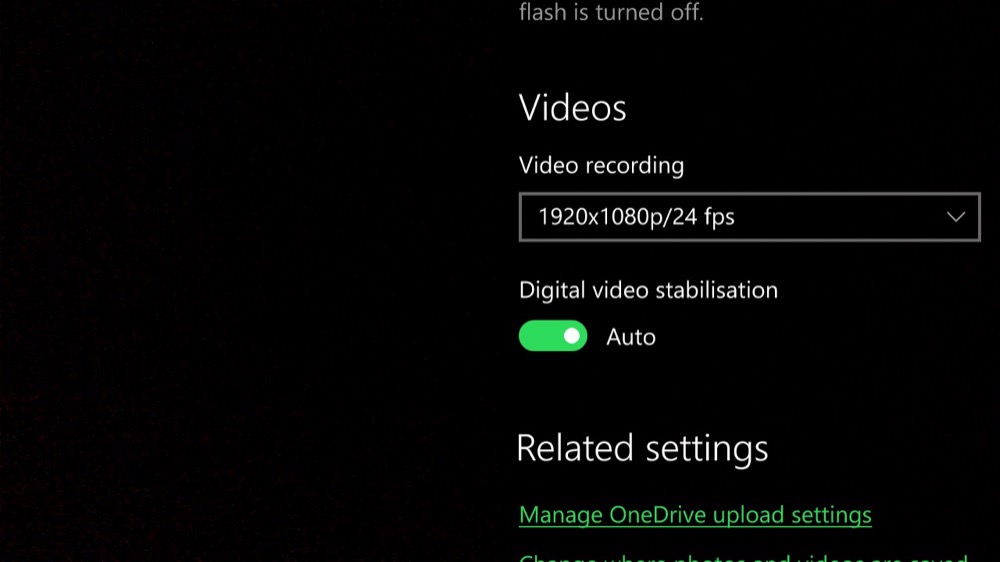 Also interesting, though expected, was that there's digital video stabilisation in addition to the physical OIS in the 830's camera - I explored this recently and found it a great help when shooting video, so a definite step up here.

Everything is that much slower on a Snapdragon 400 chipset, of course, and this was not only felt in the snail-like speed at which applications were installed. I inserted my 64GB microSD of music and media (ok, ok, maybe I'm asking a little too much here, but it should all work!) and then headed into Groove Music to find.... nothing. 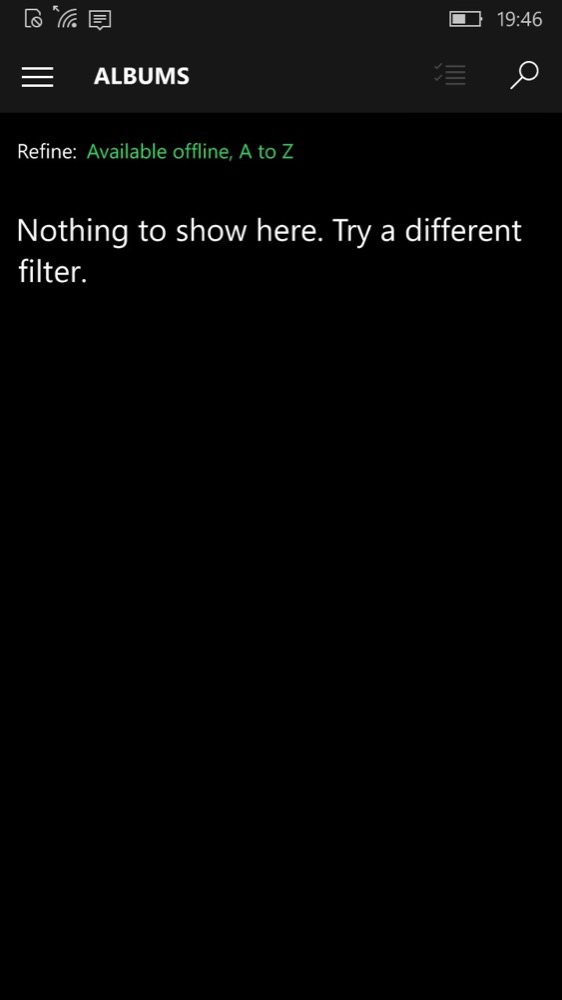 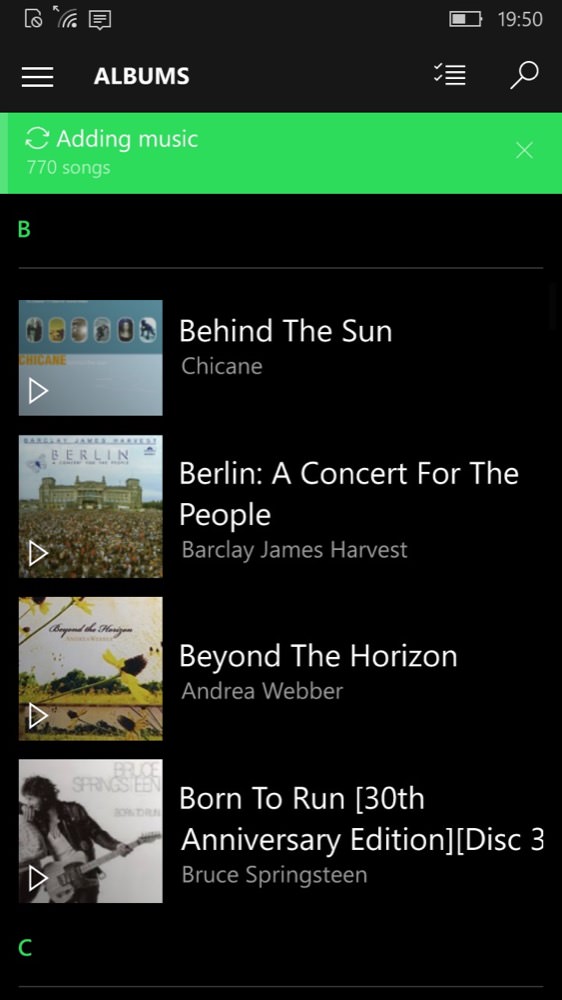 I waited five minutes and still nothing. Then the scanning process kicked in and music started to appear, along with an 'Adding music' banner. As a techy, I can understand what's going on here behind the scenes in terms of background agents, but surely there should be an obvious way to refresh manually too? Actually adding about 20GB of music took around ten minutes on the 830, but it did all get indexed in the end.

It was a similar story with videos - heading into 'Film & TV' in order to browse my 30GB of movie and video files was again underwhelming at first. In fact, there was a double-stumble because all my video material was stored in a 'Video' folder on the microSD - while Microsoft's 'Film & TV' only apparently looks in 'Videos'! I headed into Windows 10 Mobile File Manager to try and delete the second and rename the first (if you see what I mean), but the OS recreated 'Videos' as fast as a I deleted it, so any renaming failed immediately. 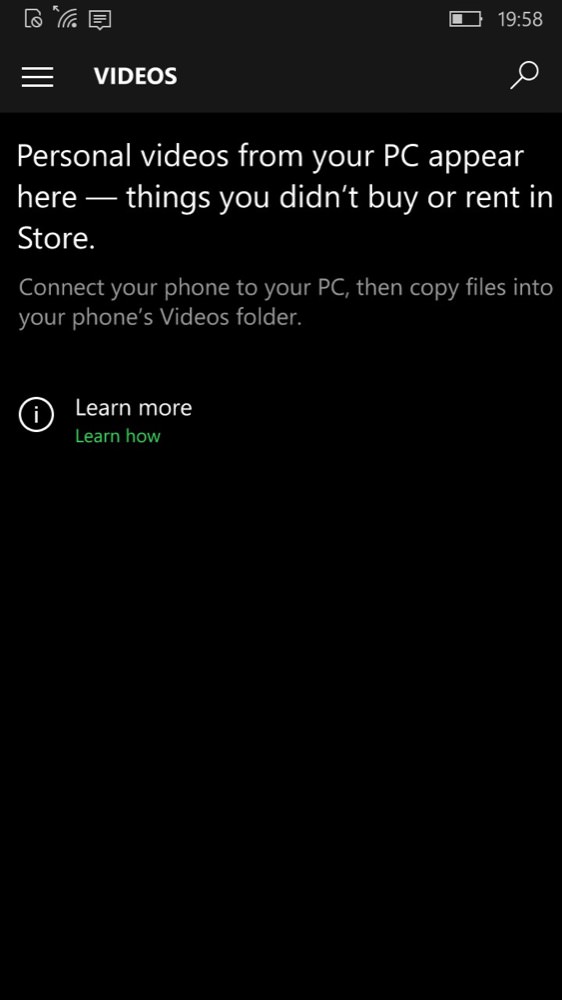 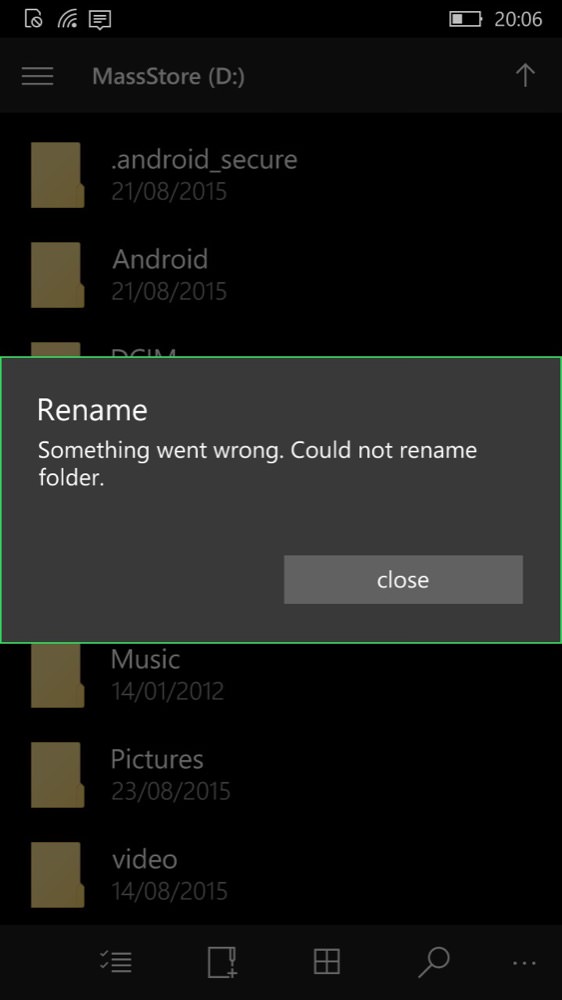 OK, no worries, I 'removed' the microSD safely - this should really be something you can do IN File Manager, but you still have to go via Settings/Storage etc. I then zapped 'Videos' on my PC and renamed the original 'Video' folder. And then re-inserted the card into the Lumia 830. Still nothing in Film & TV. I checked in File Manager, the videos are certainly all there, in fact the app even thumbnails them helpfully (and you could play them from here if you wanted). 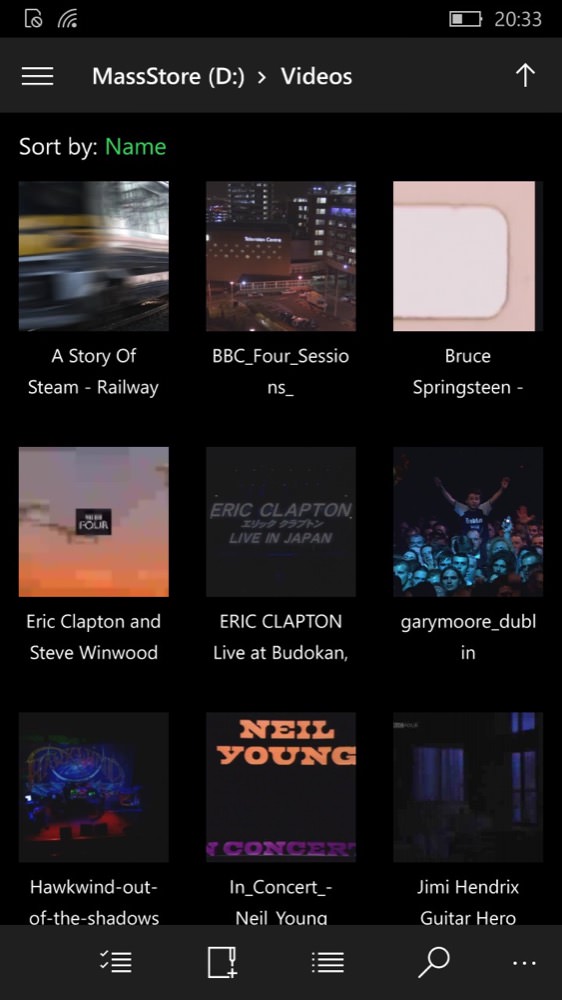 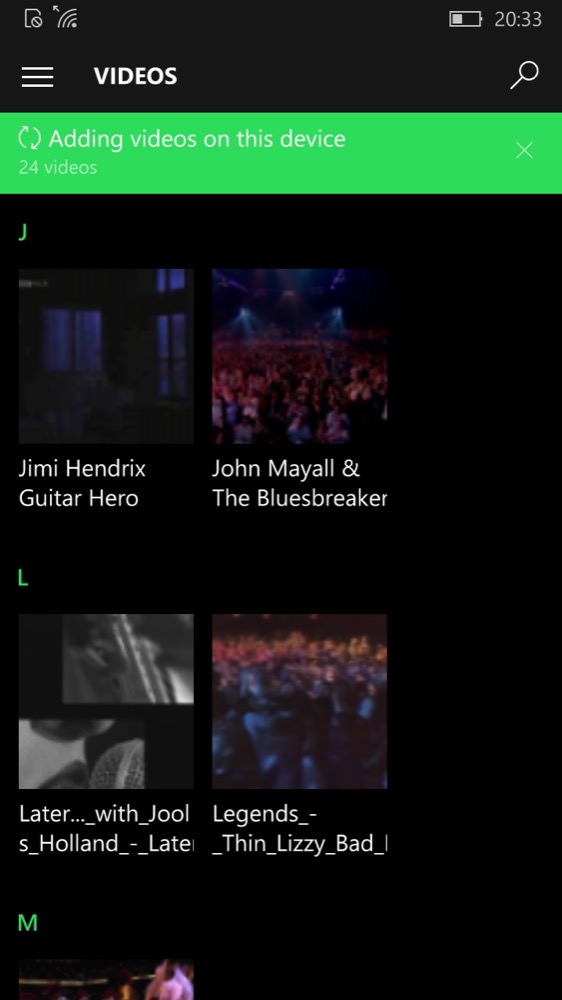 Eventually, again about five minutes later, content started to be indexed into Film & TV, and this took a couple of minutes in all.

So success for music and media, but I do wish Microsoft would put something up on screen when there's no content to show, along the lines of 'If you're here for the first time or have just added content to the phone then please be patient - it will appear shortly.'

Images are handled well enough, the 830's Photos and OneDrive applications (which should essentially show the same images if all your backup settings are right!) both worked fine (see below for some benchmarks): 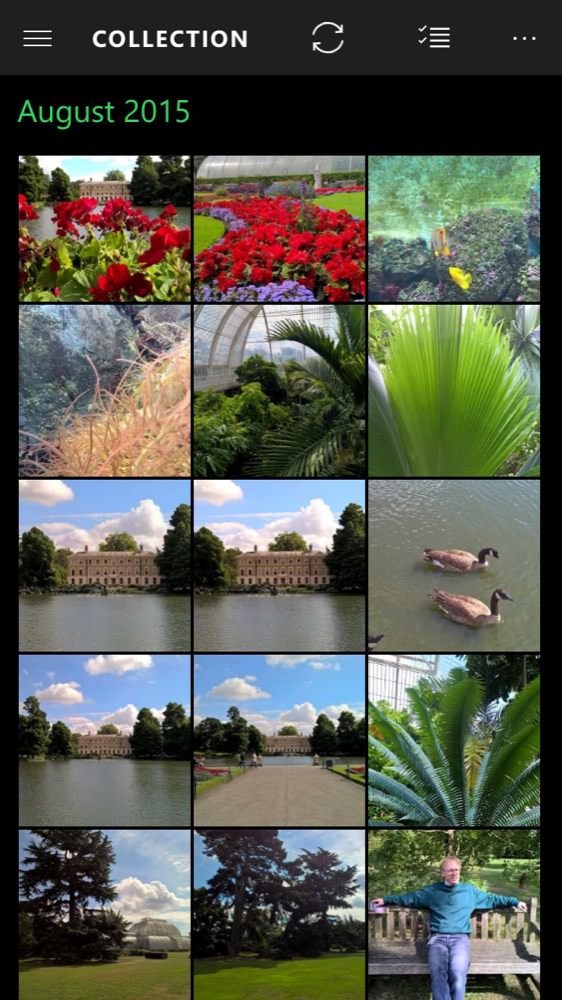 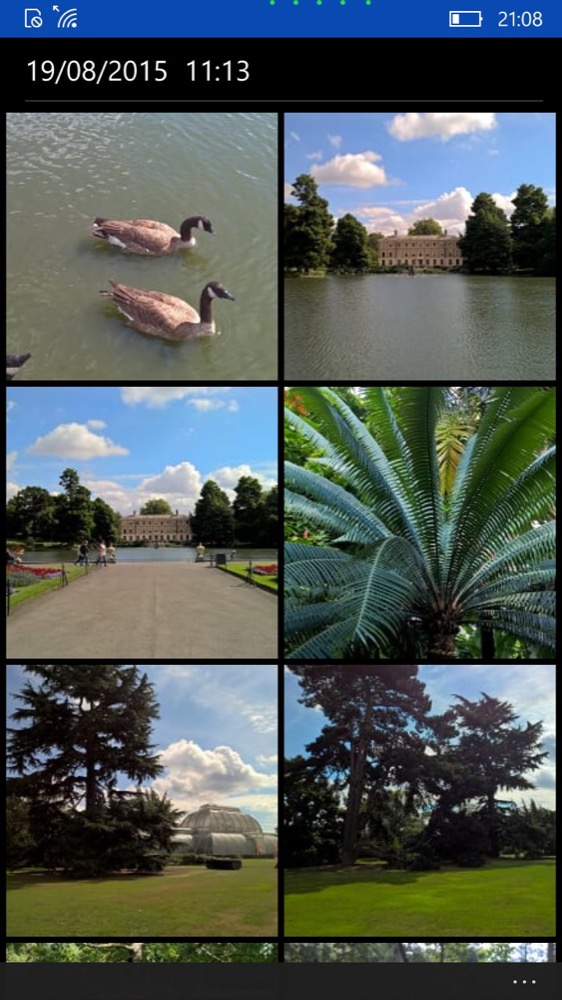 Given that Photos exists, I do wonder why Microsoft bothers with the often sluggish 'Photos' view in the OneDrive application - isn't this redundant now? By all means give me some thumbnails in a folder view, but there's no need to go all 'cross folder meta' on me, etc.

As usual, there were some glitches, and I do like to capture a few for posterity, so here goes: 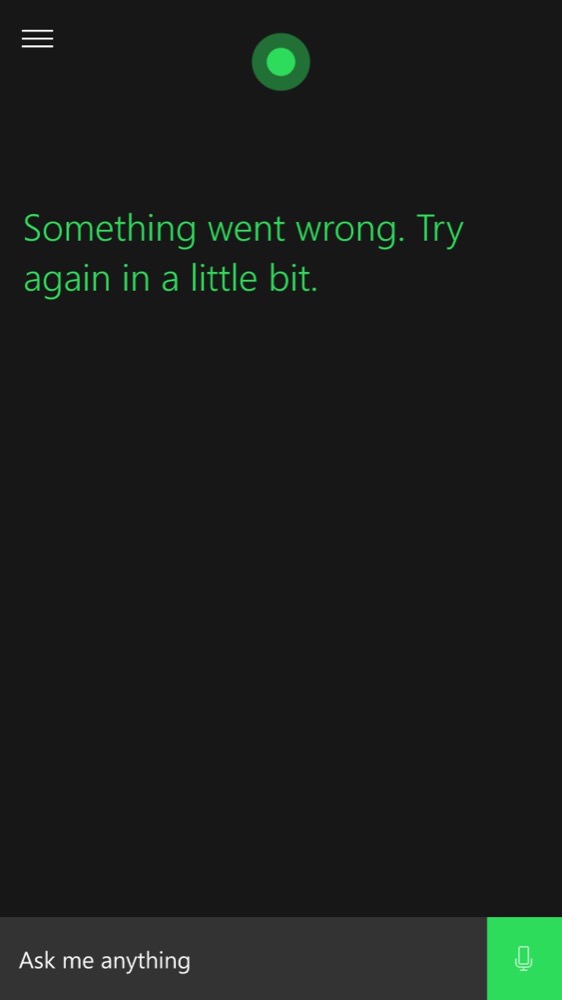 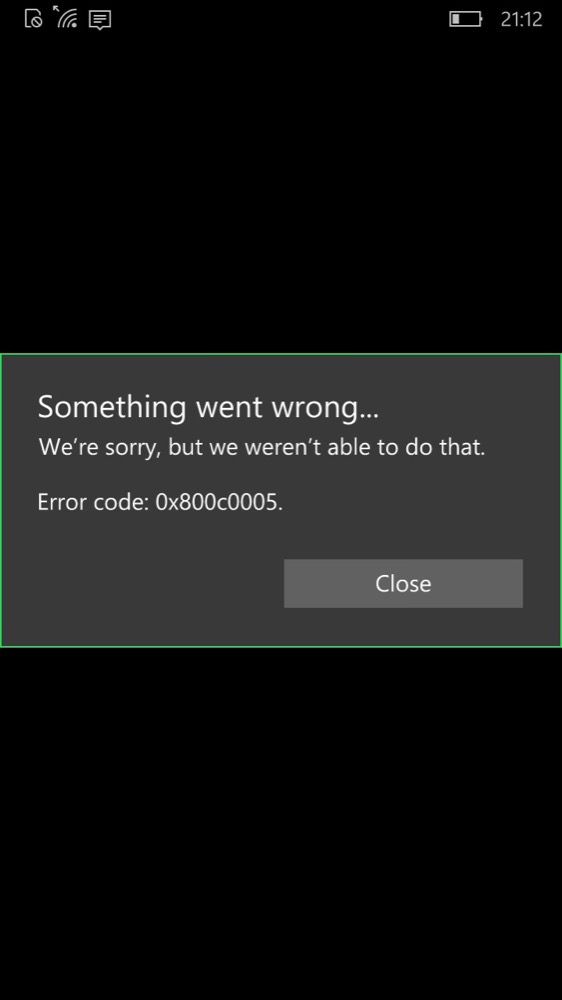 Snapped from Cortana and err.... I can't remember what the second example was in, but you get the idea. Still very much a preview, though eminently useable day to day aside from the known gotchas in build 10512.

I have to comment that switching between applications and bringing up views was noticeably slower than on the Lumia 930 - but then you'd expect this. The big question is whether the Snapdragon 400 is up to the job of running Windows 10 Mobile? Yes, it is. Or at least it HAS to be, since the vast majority of Lumias sold and in the wild are based on a Snapdragon 400 or slower/older - Microsoft still has some optimisation to do (notably that lockscreen delay) but I believe it can get performance to within striking distance of Windows Phone 8.1, all the while offering more grown-up functionality and representing a step change from Windows Phone 8.1.

In short, performance isn't that different, though even on the 930 it's clear that some actions need to be faster. Obviously, things will get snappier on all chipsets over the next couple of months, while Windows 10 Mobile is finished.

Logically, my next in-depth dive into the state of Windows 10 Mobile should be on an older Snapdragon S4 phone or one with the budget Snapdragon 200 inside. Watch this space.

PS. When will the next major build of W10M come out? I haven't heard anything from the last seven days, so I'd put the next build sometime in the first week of September, and I'll update all my phones, across all price points, of course, and report back.