Where's the character? Fall in love, not into utility

As an industry watcher, the world of smartphones has never been more competitive or better value. It's also duller than ditchwater. And, apparently, growth has now stopped and sales are in decline... With IFA 2016 just over in Germany, where yet another batch of almost identical 5" touch slabs were announced, I'm tempted to suggest that now really is the time to look for character in our smartphones. Where are the USPs? Are they now relegated to older, almost retro, devices, while new products fall over themselves to stay anonymous?

You'll have seen the tech news over the last year. Here's a typical (made up!) news post:

Company ABC today is proud to announce two new phones, the XYZ Prime and the XYZ Prime Plus. With 5" and 5.5" 1080p touchscreens and Snapdragon 617 chipsets, these two new Android 6 smartphones wow with their metallic finish, 13MP HDR-capable cameras, 2GB RAM, and flexible storage, the second nanoSIM slot can double to accept microSD. It comes with a range of covers and comes in 'dark grey, silver and champagne gold'.

Sound familiar? These devices will all look near identical too, touch slabs with iPhone-esque antenna lines, iPhone-esque curves and often with iPhone-esque UI nods too (Huawei/Honor even foregoes an app list/drawer). It's all a bit depressing. Not just for me or you, but for the industry as a whole - smartphones are now so similar that it makes very little difference which one you buy (away from the extreme bottom end) and the main differentiator is price, which doesn't bode well for anyone's profit margins.

It also makes smartphones very hard to fall in love with. Yes, I know that's a strange statement to come out with, but I'm sure that everyone reading this has a favourite phone of days gone by, a phone which wasn't just a slice of high tech but seemed to have a character, a personality of its own. Something that you felt at one with, which you were happy to hold and cherish, more than a simple communications tool, a phone which fitted your needs better than anything else on the market? 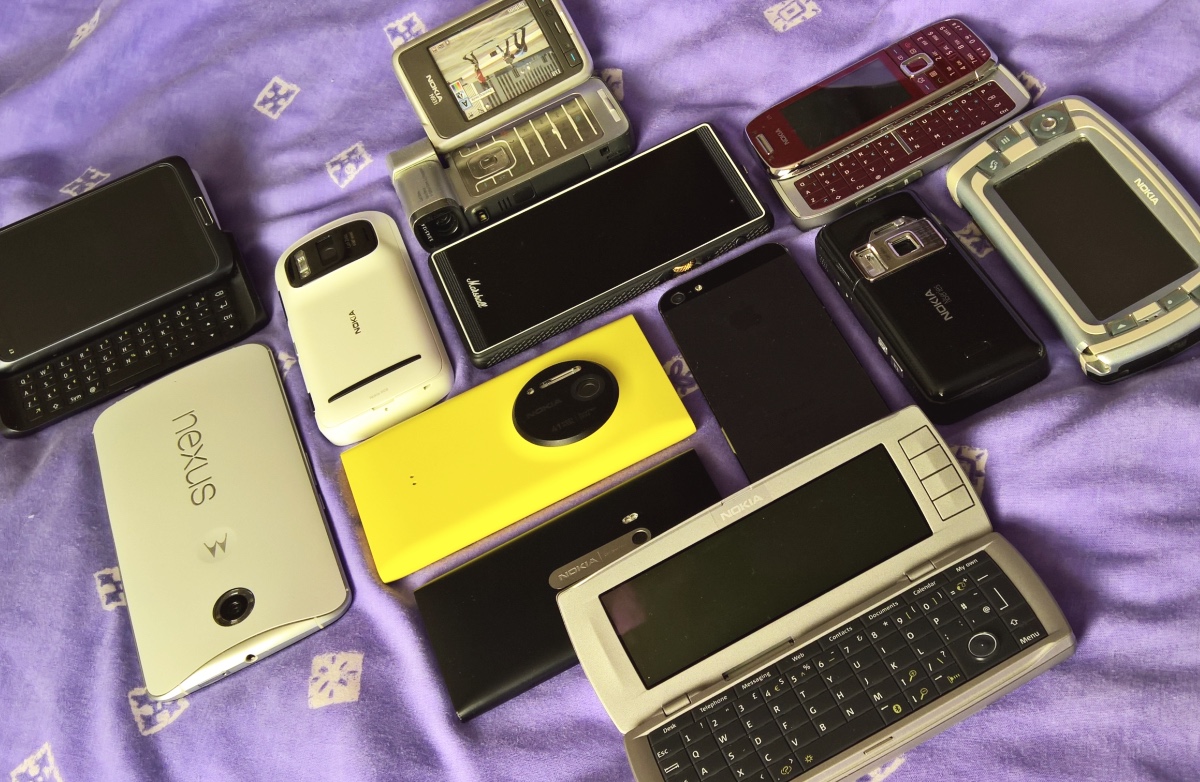 The motley selection above was gathered for a quick snap on the bed - I have something like 100 PDAs and smartphones from the last 25 years in my cupboards, but these will do to illustrate my point - there are some classics in the photo above. Let me pick out just a few which illustrate the 'character'/USP argument well:

It's blindingly obvious that part of a phone having 'character' is that it is (or was) flawed in some way. If you think about 'characters' in films and on TV, the most interesting are always those with weaknesses and flaws, where you're rooting for them against the odds. It's the same with phones with character, there was always something to battle against, something to align yourself with the phone, fighting together to accomplish everything you need to do.

It occurs to me, given the above admission, that I shouldn't be championing phones with 'character', by this definition - shouldn't I be celebrating phones which 'just work', doing nothing brilliantly but also nothing terribly? Yet there are a legion of those in 2016 and I can work up very little enthusiasm for any of them. Whereas here I am in 2016 writing eulogies for specific devices that are in some cases well over a decade old.

In addition to the smartphones in the photo above, my (ahem) museum does extend to another 40 or 50 devices (going back to the earliest handhelds and palmtops), but I had to draw the line somewhere. I'd love to hear in the comments which smartphones from the last (say) decade that you consider to have 'character', phones which you (perhaps) named(!) and certainly fell in love with. Over to you!

Filed: Home > Features > Where's the character? Fall in love, not into utility