Old WP 8.1 applications falling by the wayside - but don't panic!

One feature of tech news feeds in 2016 has been 'Company XYZ abandons Windows Phone', a headline which sounds far more dramatic than it is. Broken down, this translates to 'Company XYZ did a Windows Phone 8.1 application three years ago as an alternative to the rather clunky XYZ web site of 2013, but the application is showing its age now and, in the absence of a full Windows 10 Mobile UWP app rewrite, is being withdrawn now that the web site works perfectly well enough in Microsoft Edge'. OK, so my translation isn't as snappy, but it's more accurate.

Keeping an application supported is easy enough when it's a game or a standalone function - after all, if it still - physically - works then why withdraw it? This is the case for a huge number of Windows Phone 8.1 apps and games, which stay in the Store because they still work just as well as they did.

However, what about applications which interact directly with a web-based service, where they effectively present the same content as from the web site but packed without browser title bars and usually with a few extra bells and whistles, including notifications? It's certainly a good idea to have such an application - it'll be faster and smoother for the user (usually), plus it's a prominent icon in the user's application list or home screen on the phone.

Which is why quite a number of such services appeared on Windows Phone 8.1 as standalone applications back in the day (2012/2013), mirroring equivalent apps on other mobile platforms (i.e. iOS and Android). But it takes money to write, maintain and support such applications. These aren't 'fire and forget' apps but will instead need constant tweaks to maintain compatibility with web-based back-ends/servers and to incorporate new features that appear on the Web and on other platforms. It all takes money and resources.

And so, many such Internet properties - prominent examples of which include Amazon and Dominos UK, but there are many others - are now making several observations:

To be honest, the way forward for any Internet property or service that doesn't have money to burn, given the current small market share of Windows 10 Mobile (tens of millions of users at most), is somewhat obvious and I'm not at all surprised to see the current rash of stories about such old applications being withdrawn. It's what I would do, given limited resources.

So yes, the old 8.1 applications would still work, since Windows 10 Mobile is fully backwards compatible as an OS, but services evolve and the old apps are only going to get less and less reliable in time. We're already seeing this with Microsoft's own Skype applications, with the old 8.1 version being officially unsupported from 'October' (2016) - it'll continue to run after that but at some point in 2017 the back-end will get switched over to the new (non-peer-to-peer) system and then it'll suddenly stop working. (Meanwhile, Microsoft has a new Skype UWP app taking over for everyone who has upgraded their handsets to Windows 10 Mobile.)

In short, things change, especially so in the tech world, where much of our day to day functions are driven or facilitated by Internet-based services. Just look how far we've come in the last decade.

Whether I choose to order something on Amazon or Domino's via (a Start tile leading to) their responsive web site in Microsoft Edge or by a hypothetical future UWP app equivalent makes very little difference in practice. Yes, a dedicated application for 2016 and beyond would be slightly more convenient, but it's not exactly a showstopper. 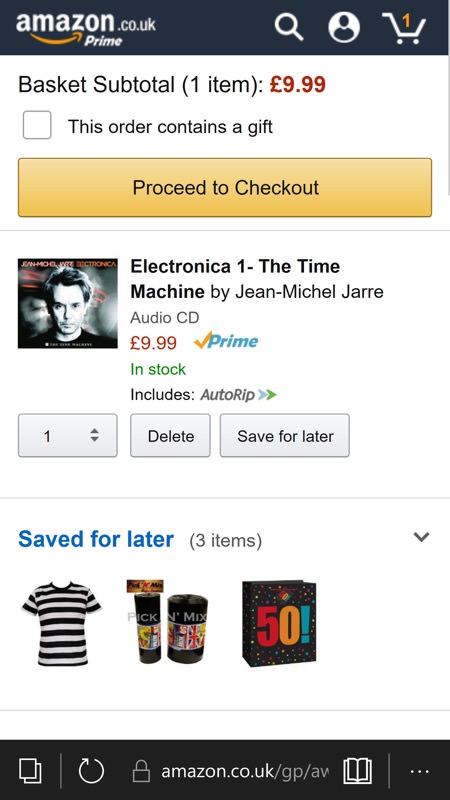 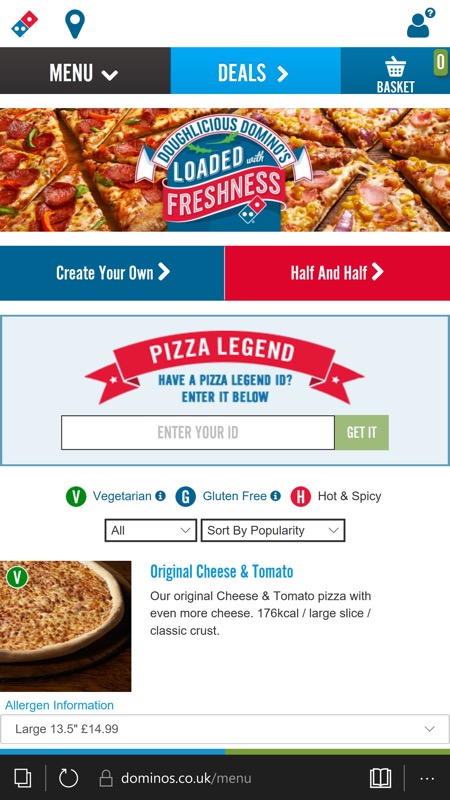 Using both Amazon and Domino's services very successfully in Edge (the different URL bar sizes are because I was using two differently-sized devices, in case you were wondering!)

So - comments welcome. Are there any old Internet-facing Windows Phone 8.1 applications you can think of where:

In the meantime, take any news stories from other sites along the lines of 'XYZ drops Windows Phone support' with in the matter of fact context outlined above. The sky's not falling in (though the clouds seem lower than they used to...!)