Windows 10 Mobile and the Future: towards Autumn 2018

In a previous editorial almost two months ago, I looked in text and diagrammatic form at Windows 10 Mobile's future through the 'Redstone 4' era, concluding that a perhaps surprising amount of commonality will still exist with its desktop counterpart, through all the UWP applications and the Universal App Platform (UAP). Looking further ahead, another full quarter, I want to see what happens as we head into 'Redstone 5', in Autumn 2018.

It's not all doom and gloom, but - as you might expect - Microsoft's development efforts are mainly on all platforms and form factors other than Windows 10 Mobile at the moment. This doesn't mean that nothing's relevant going forwards though.

Aside from the oft-repeated mantra that critical fixes and security updates will be available for two years after each branch is released (so looking to at least Spring 2019), there will be, as the updated chart below shows, UAP updates through to 2018, with Redstone 3 and Redstone 4's UAP modules expected to be fully compatible with Windows 10 Mobile, even in its 'Feature2' branch. So the likes of Edge, Cortana, and so on, will be updated across the board until at least Spring 2018.

Then there's the core Microsoft UWP application set, including Outlook, Groove Music, OneNote, Office Mobile, and over a dozen others. As part of the UWP platform, most functionality in each of these will also be available to Windows 10 Mobile users through 2018 and beyond, by definition. Yes, there are now a number of large UWP applications from third parties that are 'converted' from Win32 applications using Project Centennial, and these aren't relevant to the ARM-powered existing Windows 10 Mobile handsets, but the majority of UWP applications will continue to be just that - universal - and running just fine on the phone.

The 'Introducing' sections at the top of the chart below show how dramatically Microsoft has shifted gear in the last year. Rather than have development of its desktop OS and interface hamstrung by the need to have exactly the same features available on mobile, however unsuitable the form factor, the decision was made to split the branches after 'Redstone 2' (Creators Update) so that more and more 'creative'/3D/augmented reality aspects could be coded into the main Redstone 3 branch without giving a second thought to making the code behave itself on Windows 10 Mobile phones. This is reasonable, though sad from a 'Windows 10 everywhere' elegance standpoint, and has resulted in a dramatic upturn in Windows' and the PC's standings in the tech world (coinciding with Apple taking a few misteps with the Mac).

Anyway, on with the chart and then I'll return for a wrap-up: 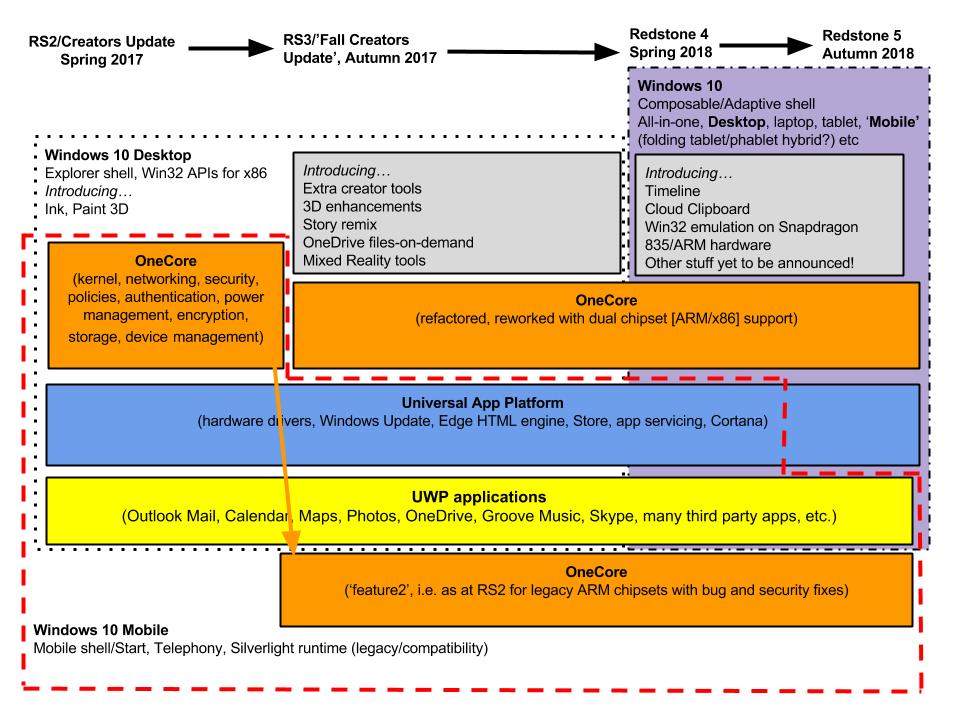 As I pointed out in my original article, 99% of your experience on Windows 10 Mobile will carry on, unchanged. In fact, it'll still get better, even into 2018, with core Microsoft (and third party) UWP apps continuing to be updated at an impressive rate in the Store. Add on the monthly ('Patch Tuesday') branch updates, bringing bug fixes and security updates, and these will continue for the life of each branch. So as long as you've got your smartphone onto the Creators Update (e.g. via the Release Preview Insiders ring) then you're essentially good until Spring 2019. You'll be protected against exploits and your UWP apps will carry on getting better and better.

We've been seeing over-eager 'Windows Phone is dead' headlines in the tech world since 2013, four years ago, and, while the headlines may be technically right at long last (in that Windows Phone 8.1 has reached end-of-support and active development of the last Windows 10 Mobile branch will cease), anyone happily using (say) a Lumia 930, 950, or IDOL 4 Pro (watch this space) will still be seeing daily app updates and monthly security patches for a long time to come.

That last sentence sounds very much like Microsoft is aware of its mobile platform's existence and is planning on keeping it stable and on an even keel. If the company was trying to brush W10M under the carpet then he'd either not have mentioned it or would have say something along the lines of 'for phone-like experience, see the Microsoft services on iOS and Android'.

Filed: Home > Features > Windows 10 Mobile and the Future: towards Autumn 2018