The dust is settling around Microsoft's shock announcement of the Surface Duo, running Android but with much of Microsoft's UI ideas. Some see the Duo as the next Holy Grail device, some see it as the ultimate betrayal of Windows Phone. As usual, the truth is somewhere in between, though I do have multiple worries over this new 'not a phone but kind of is' Surface product.

All about the Duo

We don't actually know much about the Surface Duo, other than its dimensions. Two 5.6" screens (with an 8" diagonal unfolded), USB Type C data/charge, a capacitive fingerprint sensor on one edge... and that's it. At the moment there's a single internal camera, for video calls and selfies(!), but nothing external, though this may change in 2020 - Microsoft has plenty of time for tweaking (and Panos Panay's personal proto [black] Duo has an external camera).

So niceties like chipset (probably Snapdragon 865), RAM (probably 8GB), storage (I'm guessing starting at 64GB), speakers, imaging, wireless charging, stylus support, and so on will have to wait well until next year. So for the moment it's all about the two screens.

Now, there have already been Android smartphones with two screens, the idea isn't totally new. The ZTE Axon M was in many ways extremely similar to the Surface Duo and Android itself ran much the same - applications could run on either display or span both, and the phone worked in various orientations and modes, mostly user-selectable: 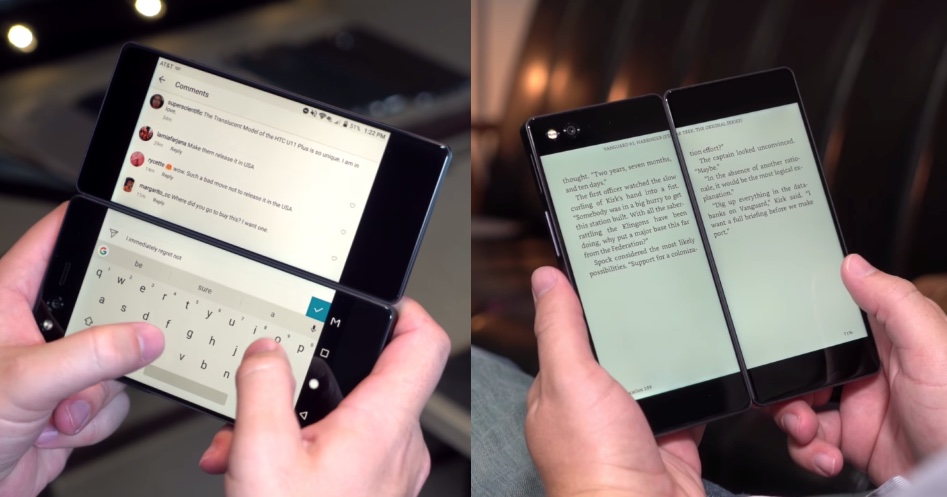 The ZTE Axon M in action, two years ago!

ZTE didn't follow-up though, so the Axon M had a limited release and is now archaic. And of course the Surface Duo is going to be more polished, massively so, in terms of hardware and software. Or at least we hope so. Microsoft has a good head start: 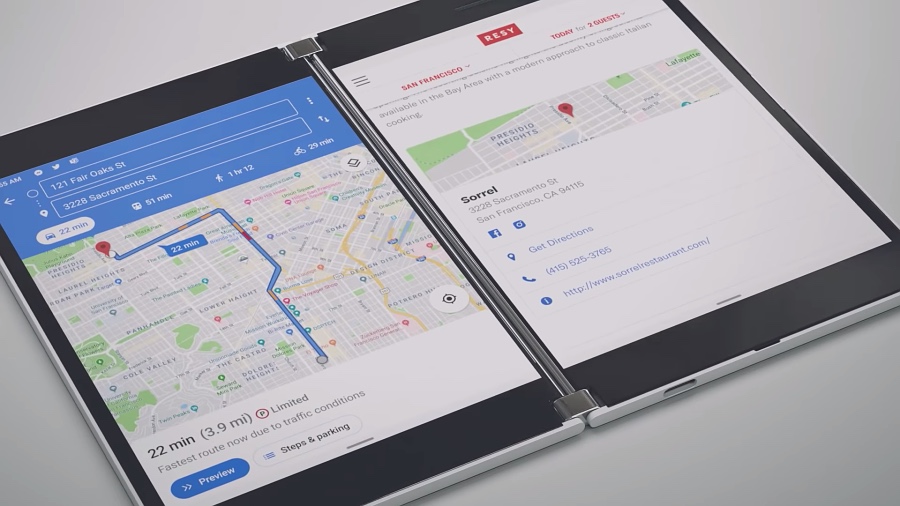 Whereas the user had to make choices about 'modes' with the Axon M, I fully expect that everything will 'just work' on the Surface Duo, in that applications will recognise the device's position and configuration and expand or adapt as needed. In the various two-screen demos we've seen so far of the Duo, we've seen: 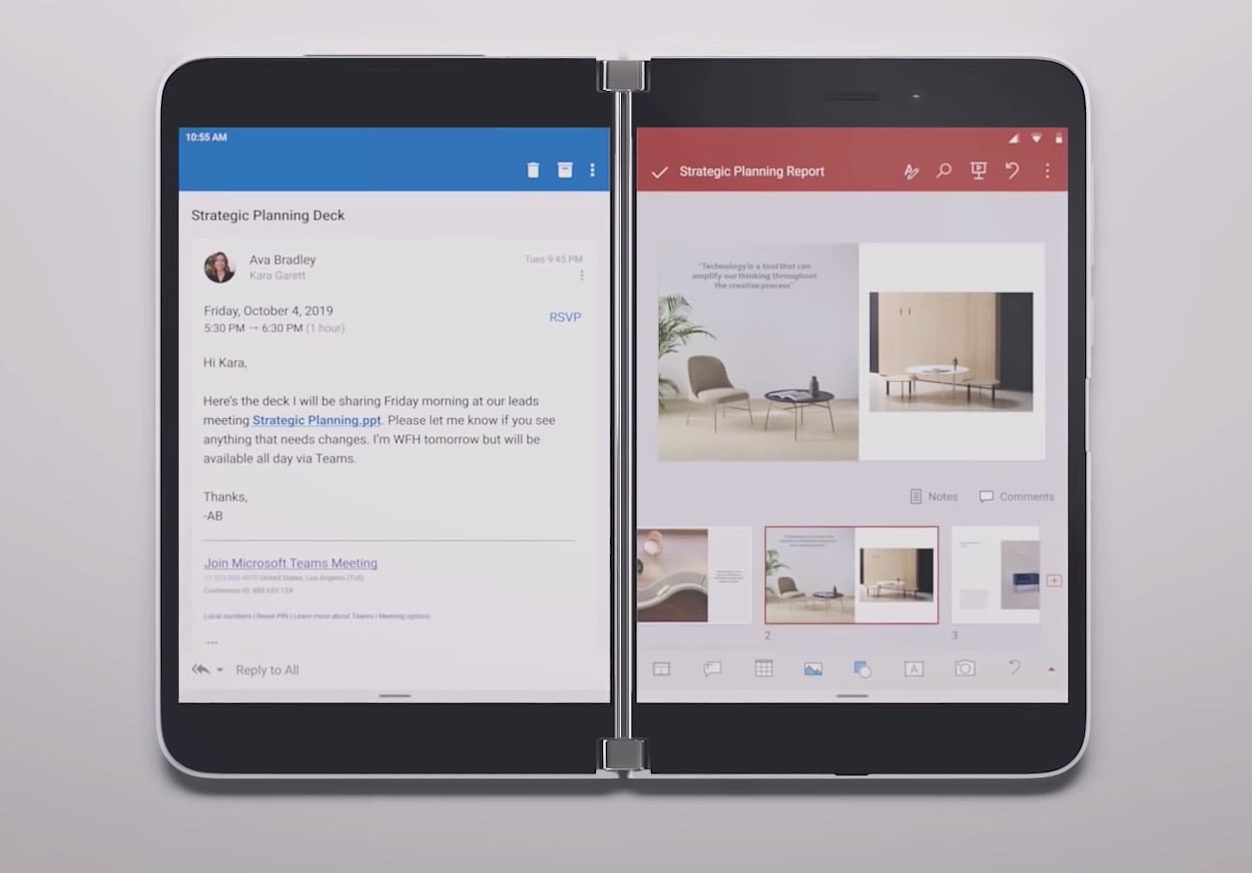 Other than 'dragging a pane towards the centre hinge', there have been few clues as to how to make sure each application does what but I'd hope that it's largely automatic, i.e. following common sense. Much as it is on the also-folding Samsung Galaxy Fold that I previewed recently - there's very little to set up, applications just fill the giant unfolded display. Yes, this is different because it's genuinely one screen component, but the underlying software principles are very similar. And on both, with the (Fold or) Duo in landscape mode (i.e. one screen above the other), if you tap into a text edit field then you get the bottom screen changing to a 'full size' typeable keyboard. 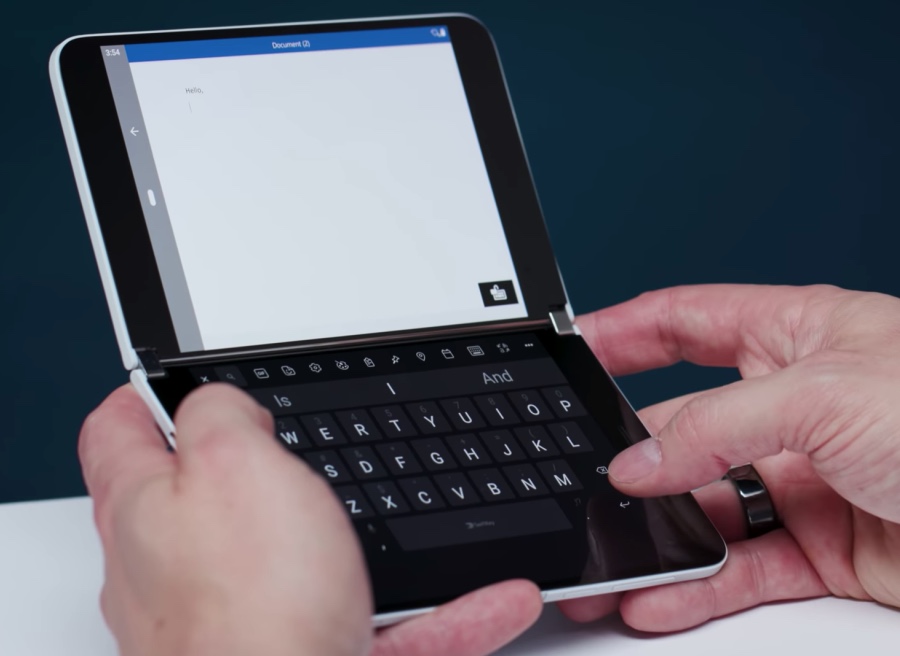 All very cool then. And, while Microsoft could ship this now with many of its own applications that support the two screens, only a handful of third party apps do likewise (we've seen Amazon Kindle, but few others). And the goal is to have the user delighted by not only having the vast number of applications available in the Google Play Store, but having all the most popular ones taking advantage of the two form factor. This may or may not take the full year, but there are other factors, such as waiting for new chipsets and (maybe) new camera technologies, for final inclusion. 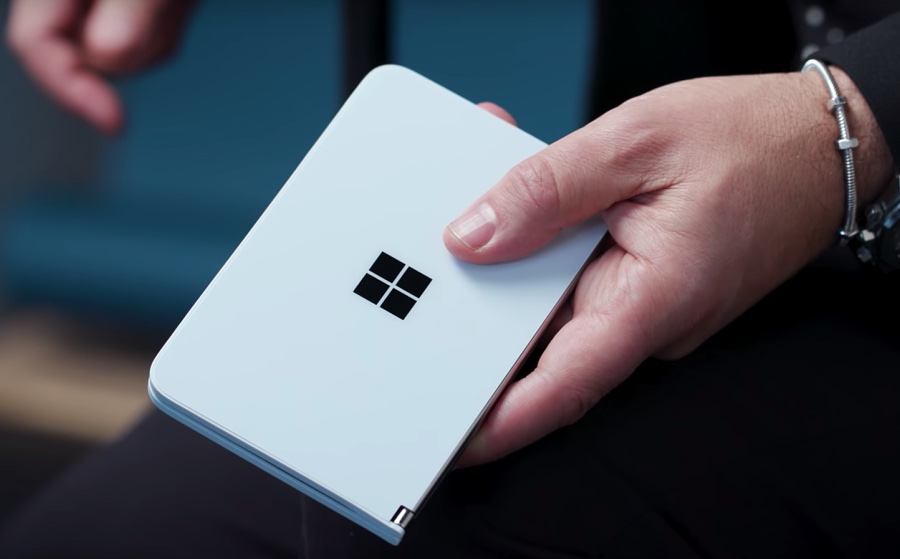 What about Windows (Phone)?

It seems, with my Windows Phone enthusiast hat on, that the obvious thing to do in terms of software for the Duo (née Andromeda) would be to take the existing Windows 10 Mobile OS builds, which already work well on ARM chipsets and which already support different display sizes and configurations, and to update and polish these instead. And, to be fair, this would work. I can immediately imagine the Duo running Windows 10XM (or whatever it might have been called by now), with all the Microsoft first party applications working superbly on day one and with hundreds of great UWP applications also raring to go.

However, and the legendary Rudy Huyn makes the point eloquently here, 'hundreds' is not enough in 2019. Even 'thousands' wouldn't have been enough. It only takes ONE application that the user really, really wants (say a companion/setup application to a favourite appliance or an app for their specific bank) and the experience is already soured and the user looking elsewhere. Windows Phone and Windows 10 Mobile owners here on AAWP have become used to not doing quite as much with their phones as their friends on iOS and Android. Yes, the UI has some lovely points, yes, you're free of Google's privacy-peeping and Apple's control, but at some point the gaps in the ecosystem start to become painful.

Panos Panay, questioned around the Duo launch, emphasised this over and over again - 'apps' were the key. Even if said application hadn't been tweaked by its developer to play nicely with the Duo's two displays, it would at least be available in the Play Store and it would at least run, even if only on the one screen. So no chance of being caught out, as one might be with Windows.

With iOS only available (obviously) for Apple phones, Android was thus the necessary choice. And Google is relaxed enough about manufacturers skinning its OS that Microsoft is going to be able to make the new launcher close enough for that on the other Surface devices that Android itself won't be quick such an obvious change from the Windows a user already knows.

So, with the best will in the world, continuing Windows 10 and UWP applications was never going to work in this IoT, connected-everything, authenticated-at-every-turn age. Despite many of us wishing it would happen. (I'd add that it's at least partly Microsoft's fault for specifying the Lumia 950 range with an iris scanner and not a fingerprint scanner - very futuristic but totally impractical. And yes, it was late in the day, but I think we'd have seen 950s with Hello-capable finger scanners inspire a fair number of hooked-up UWP apps.)

As to what will become of Windows Phone UI staples like the Start screen with live tiles, or 'Metro' panoramas, we've seen both ideas evolve with successive Windows 10 desktop branches. Perhaps toned down, but the ideas aren't totally forgotten. I wonder if any of the Start screen DNA will make it into Microsoft's launcher for the Duo? 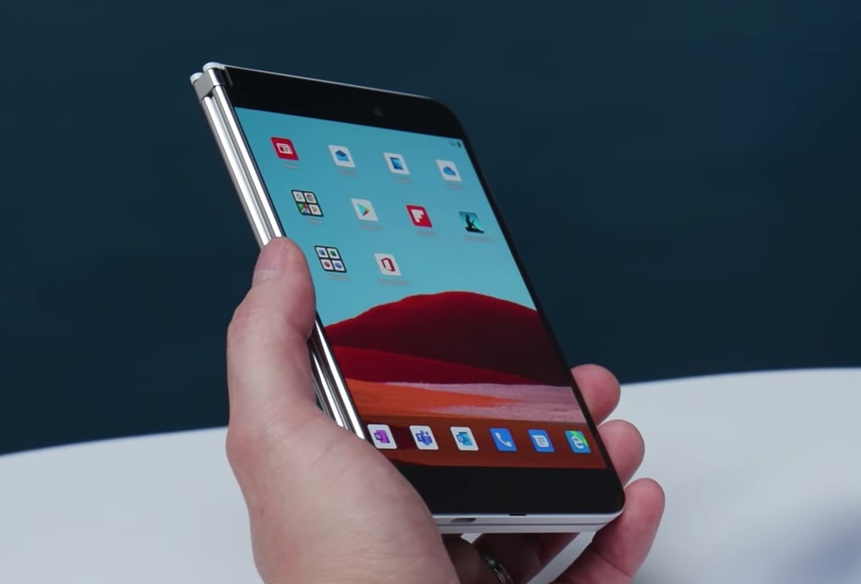 As intimated at the start, things won't be plain sailing for the Surface Duo - folding and dual screened smartphones are very definitely a 'thing' now, even if ZTE has forgotten its Axon M. LG's 'V50 Dual Screen' pictured below offers twin displays right now, if in slightly accessorised form: 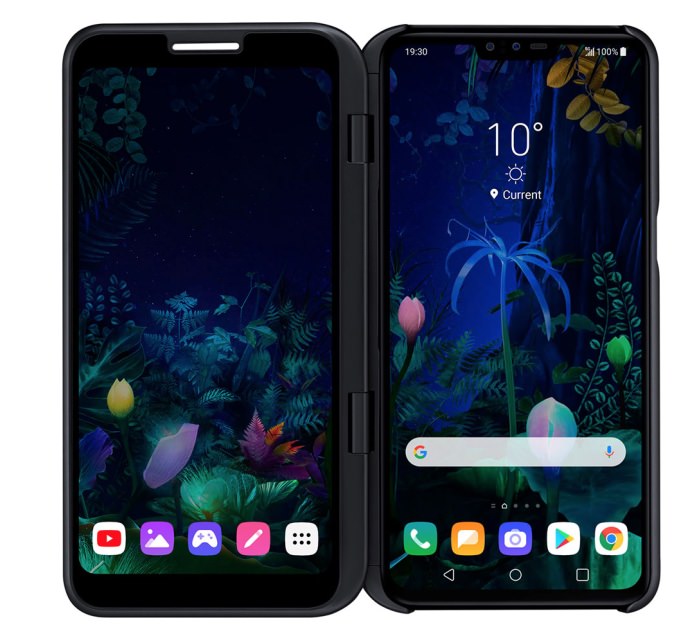 So there may be nothing directly eating the Surface Duo's lunch right now, but by the end of 2020 there will be a lot of competition. I'd expect a dual or folding device from most major phone manufacturers by then. Samsung, in particular, which seems to have at last nailed the Galaxy Fold, will be on its 'Fold 2' by then and, given that it's the largest phone manufacturer in the world, this will the solution to beat.

A year is a long time in mobile, mind you, and if the last few years have taught us anything then it's that Chinese manufacturers will leap in and copy a design and offer a similar product at a fraction of the cost. Yes, there's a big software component to Duo, but I'd expect a variety of sub-£800 phone/tablet/folding hybrids from Xiaomi, OPPO and others by the time Duo actually launches.

There's also the issue of Microsoft's commitment to a project. The famous Lumia 950 launch in 2015, itself watered down from what the 950 range could have included, was followed by fairly half hearted development of the interface, with most branch updates only offering fixes. Secure, yes, updated kernel, yes, but revolutionary or optimised it wasn't. Head back a few more years and there are still users upset that Microsoft couldn't deliver Windows 10 Mobile to their 8.1 devices or keep updating 8.1 itself. And then there's the whole Windows Phone 7.5 upgrade fiasco, where architectural reasons meant no software upgrades to 8.0. And should we head back to the early 2000s and lack of commitment to Windows Mobile, as it was then, resulting in a too-late switch to a next gen touch OS, what became Windows Phone?

In short, Microsoft has a bit of history at not following through on mobile plans. Given the high profile tease last week, I'm really hoping that it can pull Surface Duo off. It will certainly help that most of the Android underpinnings already exist.

Comments? Can you wait a year? Do you want to? And what similar solutions are you employing in the meantime? 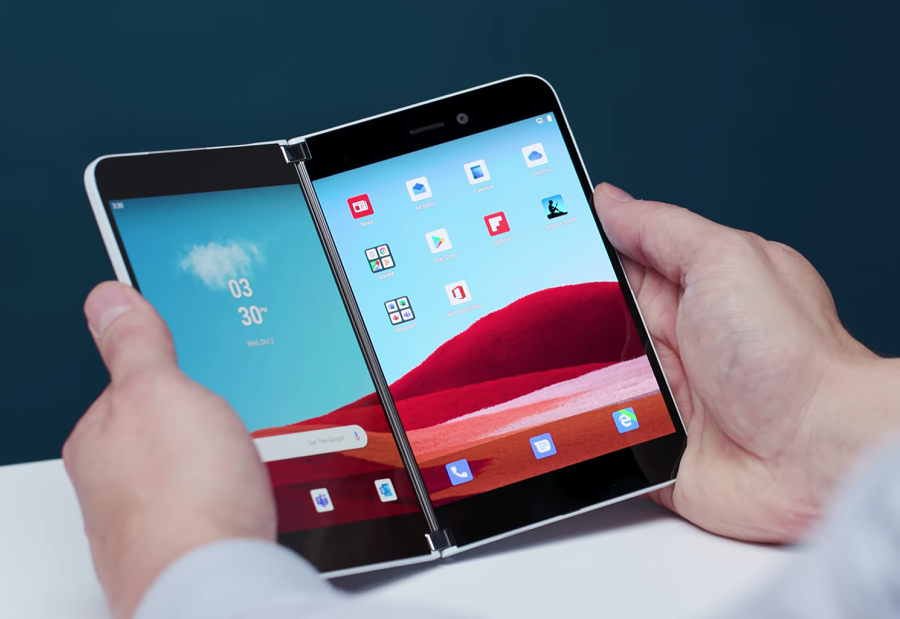 PS. See also ZDNet's guide to how development for Duo will work. Plus WC's 'History of Andromeda'. And, for a third party semi-hands-on video, look at CNet's coverage here (also the source of a couple of images above).