There comes a point when enough is... actually enough. For people relying on real time communications with other human beings, this point may have just been reached, with Windows Phone and Windows 10 Mobile. We've had the official Twitter client not supporting active notifications for a year now, ditto Facebook Messenger, and now the ultimate Whatsapp deadline is upon us. What happens to a communications device when it can no longer effectively communicate, I wonder?

Now, it's true that basic SMS will still work on Windows 10 Mobile, of course. That's the lowest common denominator. Ditto email, which works on just about anything and via multiple protocols. But add esoteric but popular communications channels like Apple's iMessage and Instagram DMs to the shortlist above and it's clear that as of 2020, Windows 10 Mobile is the platform that's rather out of touch - or rather you will be if you're using it.

And it pains me to write all this - I've maintained a Lumia or similar for years, despite Microsoft's increasing neglect of the platform, but the termination of Whatsapp support really is the last straw - my family tree RUNS on Whatsapp groups. No Whatsapp, no point in ever reinserting my SIM card etc. since I won't have a clue what everyone's doing or talking about. In other families, it's perhaps iMessage or Facebook Messenger performing the same purpose, both also locked away from Windows phones now, of course.

Yes, yes, get everyone to switch to Telegram, you say, it's as good as Whatsapp (there's Unigram, a UWP client) and all will be well. But have you tried getting Uncle Ben and Auntie Maud and so on to all switch from an application they've been using for years, just so that you can carry on using an OS that's almost out of support completely? 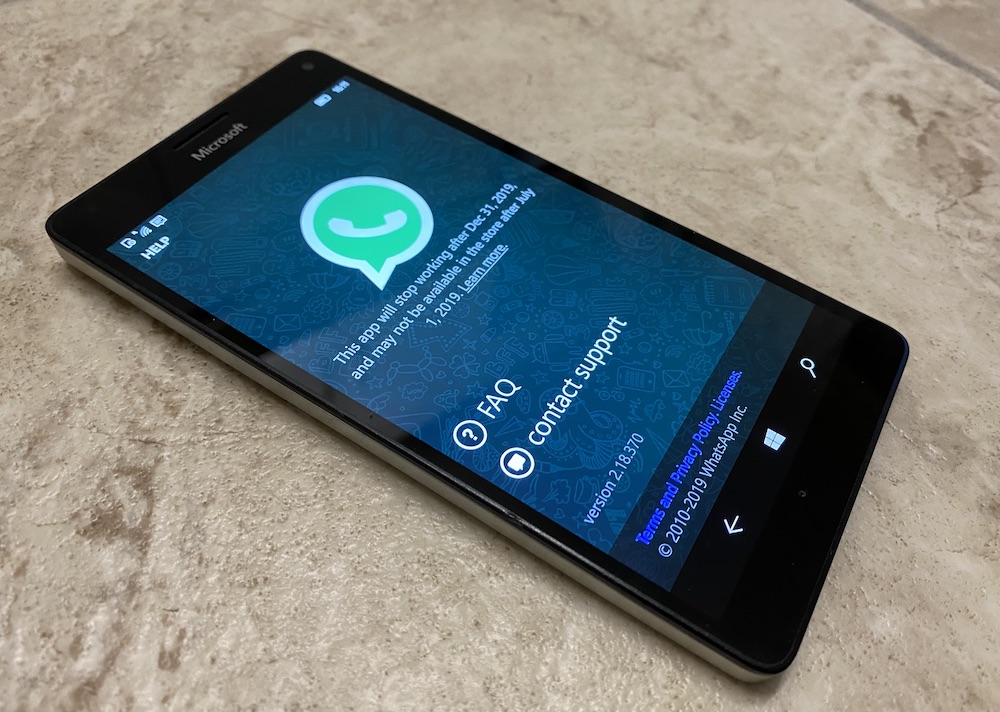 All of which rather relegates classic Lumias like the 950 to the role of what I'm going to call 'Camera+', they have a jolly capable imaging system and are connected in that you can still share such images socially, back them up online, etc. You can do the aforementioned SMS and email. You can browse the web - to an extent, since many PWA sites require more than 2017's version of Edge can support. And, in addition to Microsoft's built-in UWP applications, there are stil plenty of third party UWP champions. Just don't expect to be as connected to your favourite people in the real world as you used to be, or could be on other platforms.

Which brings us back to the age old question of how one defines a smartphone, i.e. what it's for, what it's expected to do. Yes, a Lumia 950 (or similar) is still an amazing slice of technology in your pocket and it can do around 100 different things. But if some of the things you really want a smartphone to do include the communications methods above and they're not in the 100 then it might be time to have a rethink.

Your comments welcome though - am I being too defeatist? I'm trying to view all of this from 'outside' - I do accept that within the AAWP bubble, with everyone Unigrammed up and mostly Facebook haters(?) a somewhat biased opinion might emerge. I'm just trying to be both realistic and honest!