Following on from an earlier leak @evleaks has tweeted a rendered press image of the white variant of the unannounced Nokia Lumia 929. The Lumia 929, which is expected to go on sale in November and will be exclusive to US operator Verizon, appears to have a design half way between the Lumia 928 and the Lumia 925.

On the screen of the device there are three columns of Live Tiles, which points toward the device having a 1080p resolution screen, support for which is expected to added in the Windows Phone 8 GDR3 software update. Also noteworthy is the 20MP camera module on the back of the device, which is accompanied by a dual LED flash, a contrast to the Xenon flash that is included with the Lumia 929. 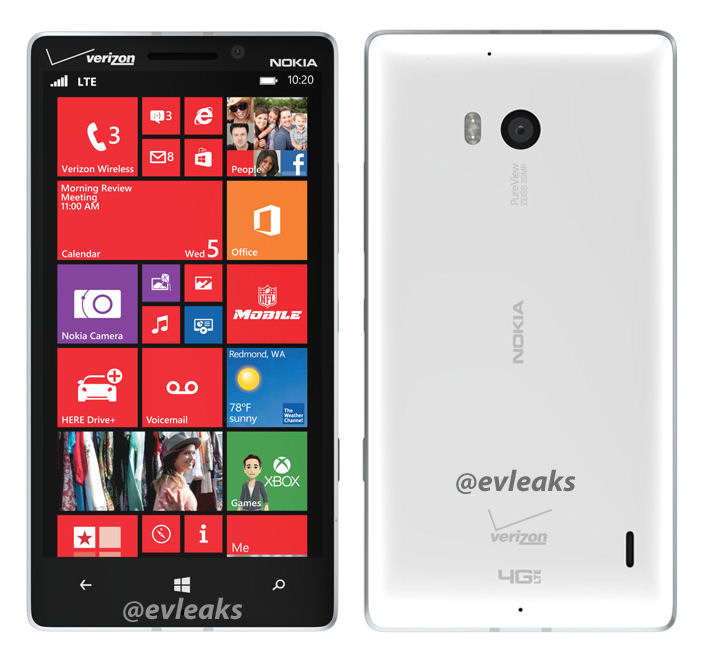 As we previously noted the design and Verizon branding would fit with the Nokia RM-927 device that was recently certified by US regulatory authority the FCC:

The Lumia 929 can be seen as Verizon's version of the Nokia Lumia 925, but it is important to note, as noted above, that it appears that it will be based on a more recent Snapdragon SoC. In technical terms this would make the Lumia 929 superior to the Lumia 925, although the real world impact this will have on consumers is unclear. One potential area where this could have an impact is the delivery of future software updates, the  Lumia 929 could potentially get updates for a longer period of time that the Lumia 925.

The Nokia Lumia 929 will be exclusive to Verizon and will be positioned as an update to the Nokia Lumia 928, which it will almost certainly replace in Verizon's Windows Phone portfolio. The smartphone is expected to go on sale in November in order to catch the seasonal Thanksgiving and Christmas markets (peaking sales period for smartphones in the US).

While the leaked image are, in our judgement, genuine they should be treated as unconfirmed until the formal launch announcement is made by Verizon and Nokia.