Microsoft and Samsung's collaboration with 'Link to Windows' is reaching new heights of sophistication with the latest update in the last week, so here we go over the major features now available, in June 2021. The Your Phone system is available on other Android handsets, but not to quite the same degree - but it's getting there across the board. It's not DeX or Continuum, but it's arguably now as useful, driven by the PC more than the phone. The top new feature is running multiple Android apps at the same time on your Windows computer, but there's plenty more to impress. See below.

The aim in each case, whether it's (wired) DeX/Continuum or (wireless) Your Phone, is to be able to use a larger display, trackpad, mouse, keyboard, and so on, all with content that exists on, or is accessed by, your smartphone. So replying to messages, typing up notes, even watching captured media on a much larger canvas. This last is a no-no on Your Phone on the whole because of the limitations of Bluetooth bandwidth, but the rest is relatively plain sailing.

Provided you have a Samsung phone. Samsung codes in extra functions and streaming APIs into its Galaxy phones, over 30 of them, listed in full here, the highlight being able to 'run' (actually live streaming with touch and keyboard interaction!) Android apps from the phone 'on' your Windows PC. Not every third party application is fully compatible or practical, but a lot are. With patience, you can have a lot of your Samsung Android phone within Windows.

(Non-Samsung Android devices can still play with Your Phone, it's in the Play Store and also now in Windows PCs by default, but the application streaming and clipboard functions demonstrated below don't currently work. iPhones (i.e. iOS) can access even less functionality. So... it all depends on your smartphone make and model!)

Screenshots here are from my Surface Go (itself a very portable device, of course, but this could equally well be any other Windows laptop or desktop), with the latest Your Phone production version from the Store, and with latest firmware installed on my Samsung Galaxy S20 FE. Let's start with the 'Apps' view, mainly because there's a lot to see (and do): 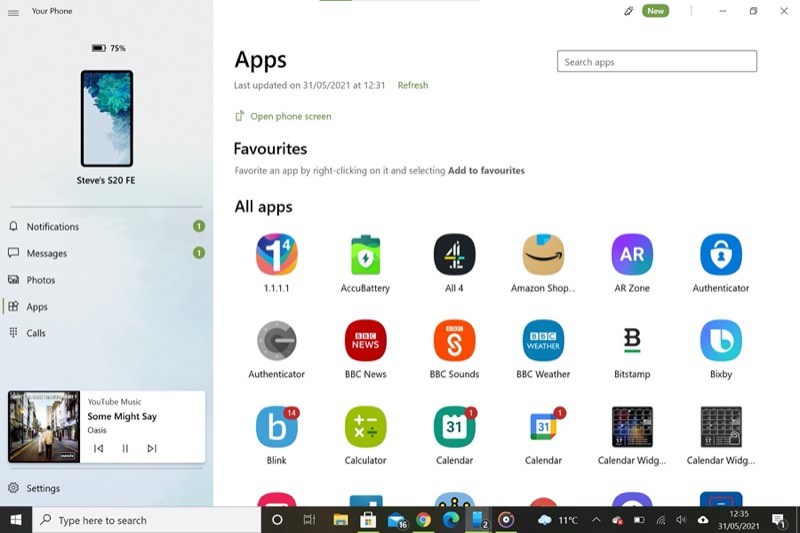 Although there have been minor updates to the core notifications and messages (from your phone), in terms of collapsing and viewing, note two things above. Firstly, the display of whatever music is currently playing on your phone (which may well be routed through to Bluetooth speakers or headphones, for example), complete with basic playback controls. Excellent for pausing or changing track. Secondly, the 'Apps' screen here, shown before I've added any to my 'Favourites'. All Android applications from the phone are shown here in the launcher, regardless of how well (or badly) they behave under the app streaming system.

I should amplify what that means. Obviously you can't run Android applications directly under Windows, but what Samsung and Microsoft have done is implement a way to run each app on the phone but send all of its screen output to a window on the PC, then pass back to the phone any touch input or keystrokes. The bottom line is that it feels like you're 'using' the original application, albeit more slowly than usual (over Bluetooth wireless).

In use, you'd typically click on one or more (what's new here is that multiple applications can be 'running' at once), acknowledge the start of app streaming on the phone (for some reason this response never gets remembered, so has to be tapped for each major Your Phone session), and then use the 'phone-sized' applications on the PC screen. Here I've started up and tiled three likely contenders: 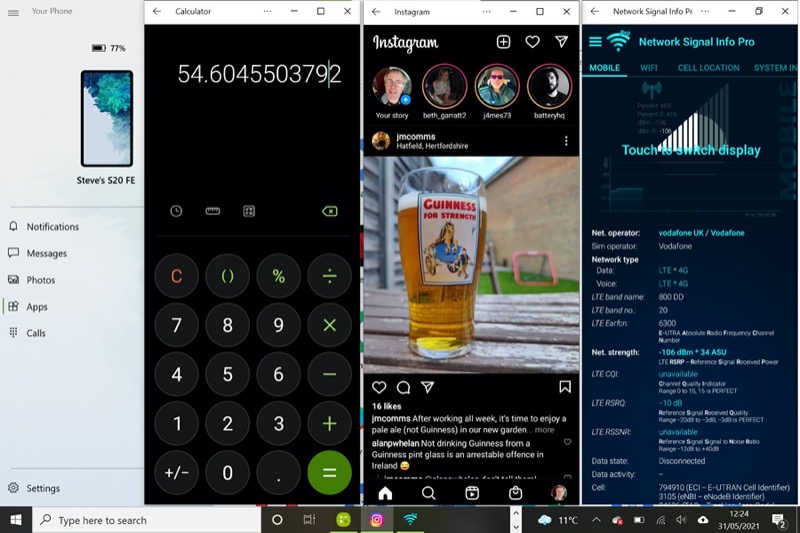 Although there are window resizing tools and controls, in practice (in the current version) I didn't find a single application that could expand beyond its 'phone screen' window. This may change with updates, of course, and I hope it will. It would make the system immediately more impressive. But swipes, clicks and keystrokes all work as expected - I've tried to pick examples where you might genuinely want to use phone app functionality rather than things already present on the Windows PC. So, for example, Instagram and a low level network utility above, and Google Maps, phone file manager, and phone music streaming playback, below. 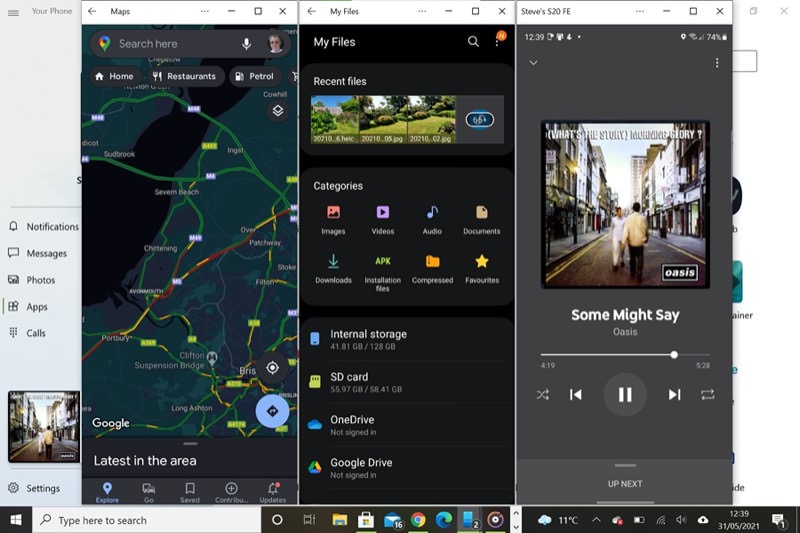 In practice, the startup delay for each can be as long as five seconds, since everything's got to be set up and then interface transferred over Bluetooth - so this isn't a lightning fast, use-it-all-day solution. Your Phone itself, in terms of integration of phone notifications, messages, and calls, is a lot smoother and faster - and useable as a result. But 'running' Android apps is a bit of a last resort, i.e. there's no way to the same data or service from the wider Internet and a desktop class browser.

Not strictly new but at last working properly is 'drag and drop' to copy files between phone and PC. And vice versa. It's a little clunky and slower than a proper wired MTP (i.e. just plug the phone in) solution, but it does work.

The procedure is, as I say, two directional, but let's demonstrate by copying a PDF from my Galaxy S20 FE to my Surface Go wirelessly using Your Phone. With a Windows Explorer window open on the PC, I go to my phone 'home screen by clicking its image in the Your Phone interface:

I then navigate into the 'My Files' application on the phone until I get to the PDF I want sent across: 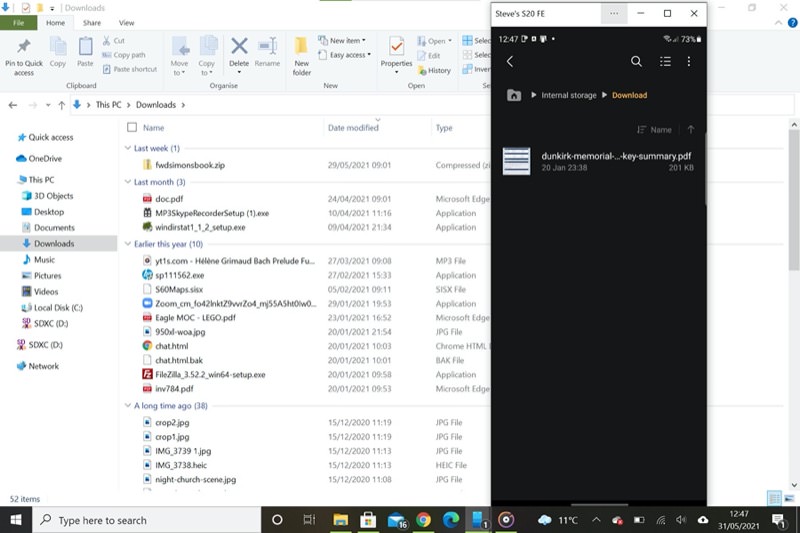 Drag and drop from the 'Android' window into a destination window in Windows Explorer then copies the file (or files) across:

And vice-versa - dragging a file from Windows Explorer to the 'home' window of the virtual phone copies it into Downloads on the Samsung.

There's also full clipboard sharing between the two entities. This has to be toggled on in Your Phone's Settings (because there's some impact on system speed and resources while possibly largish content is passed around over Bluetooth), but it's worth it. Most of the time you'll be copying strings of text or hyperlinks and these are relatively small and fast to copy. Here's the toggle you need: 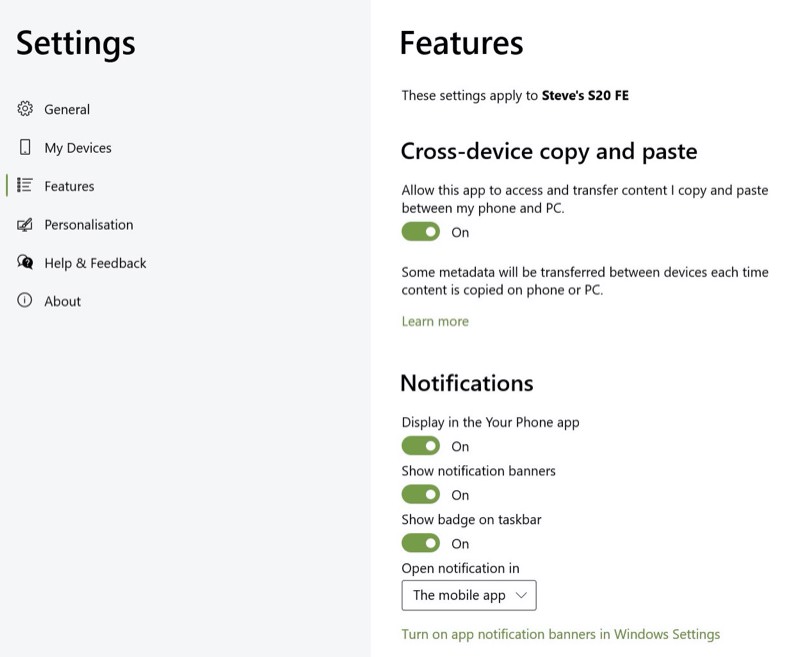 Also relatively new is being able to manage your phone's media (photos, etc.) from the larger screen of your PC, again all wirelessly. Here I was experimenting with the Samsung's Single Take mode and ended up with several shots of the ground and my bare feet! Time to select these and zap them: 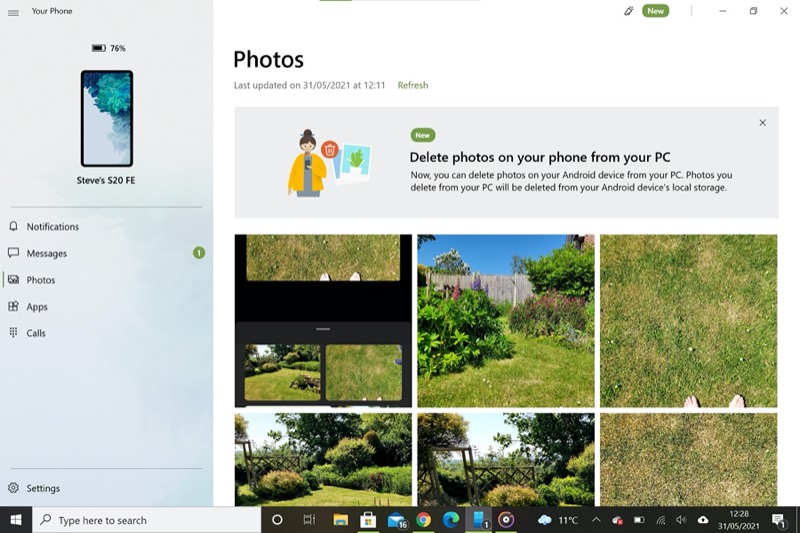 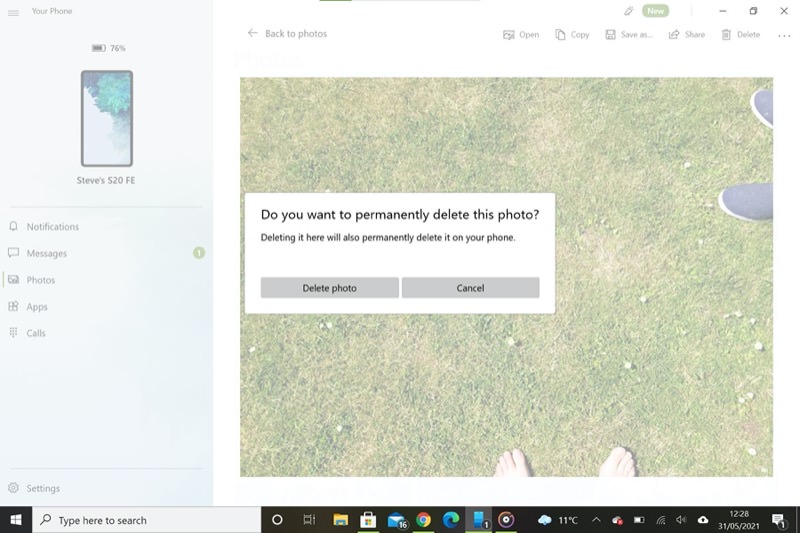 Add in the usual mirroring of notifications, messages, and calls, so that you 'can handle them without taking your hands off keyboard and trackpad' and, in theory, you can imagine yourself living with Your Phone open and useful a lot of the time.

In practice, I do find myself only using it occasionally. When I'm heads-down in something that needs concentration - writing, spreadsheets, video editing, the last thing I need is to have interruptions from my phone. I register with my ears or eyes that something's arrived on the phone and then, when convenient to me, I take a break from hunching over my Surface Go and stretch, reach over, and pick the phone up to see what's happened. Yes, if a message then needs a long reply then it's tempting to handle it on the PC in Your Phone, but most times a simple one line reply is all that's needed to something - if that.

But we all work differently. Even as a 'Your Phone' appreciator, I'm not a hardened user. What about you? Data points welcomed - do you use Your Phone? And if not, why not? Perhaps you don't use a Samsung phone? That does seem the most significant restriction, certainly for the advanced features above. I'd like to see Google roll some of what Microsoft and Samsung have cooked up into the Android Open Source project, at which point more people can do more to hook up PC and smartphone.

PS. I also use an iPhone as one of my primary devices these days - interoperability with iOS is extremely limited, but again perhaps even that will open up in time? I'll keep an eye on this and report back.