In part 2a of our Nokia Lumia 800 review, I looked in detail at its stills camera, concluding that it's decent, but with a few software issues and quality that's ultimately a step down from the Nokia N8 and iPhone 4S. In this, part 2b, I look at its video capture capabilities and quirks in equal detail, finding that the Lumia 800 makes a rather good video phone, with just a little room for improvement in future updates. See also Rafe's comprehensive part 1, looking at the Lumia 800 hardware and background. 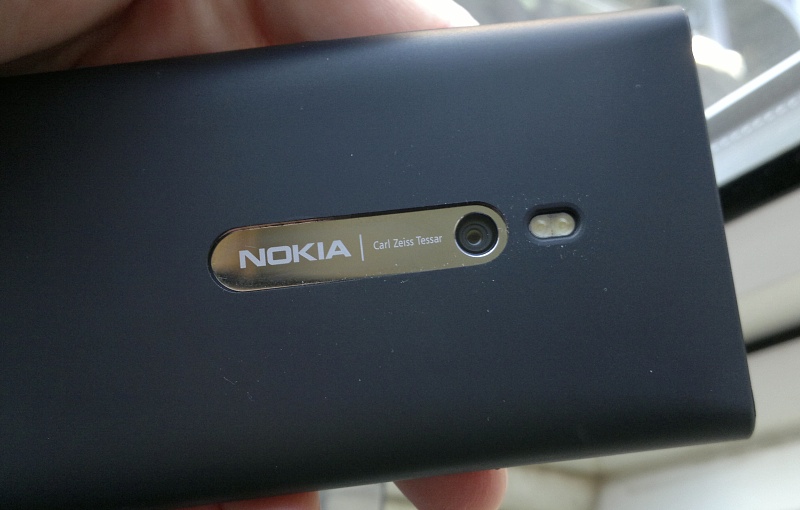 Windows Phone doesn't always get the plaudits it deserves - on the video capture front, each Windows Phone device now has continuous auto-focus and intelligent digital zoom, making it a compelling amateur camcorder, albeit with a maximum resolution of 720p. Some competing smartphones now shoot at 1080p resolution, but the single core CPU Windows Phone platform currently maxes out at 720p, still quite high enough for almost all users in my opinion:

The camcorder interface is almost identical to that for still photos, with the addition of on-screen + and - zoom icons (of which more below). Diving into Settings reveals the same choice of: 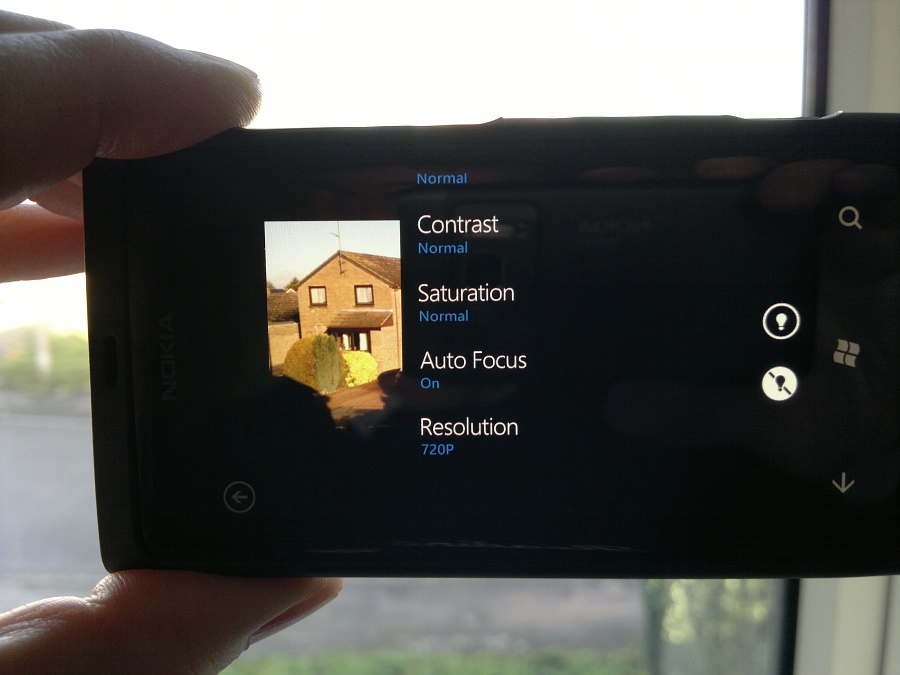 The zoom icons on the camcorder screen aren't token efforts, as on most other mobile platforms. One issue with most phone-shot video in the past has been that the base resolution would be captured (e.g. VGA or 720p) and if the user zoomed in then this VGA or 720p frame would be stretched to produce the zoomed video frames. Nokia pioneered a new approach with its N86 (running Symbian, followed by the N8), where the full sensor resolution would be used at each point in the zoom process, i.e. a new zoomed frame would be derived from the sensor rather than stretching an already downsampled version. I've called this 'intelligent digital zoom' and it typically means that you can zoom up to 3x while seeing full (VGA or) 720p resolution and detail.

The same system seems to have been picked up by Microsoft for Windows Phone and all the WP devices I've tried support the same intelligent digital zoom, albeit with the zoom icons allowing you to go to (roughly) 6x, at which zoom factor there will be some frame stretching involved. See the example in the demo video below. For the end user, all this simply means is that they can safely ignore the usual rule about never using digital zoom. The only real caveat with the Windows Phone implementation is that you can't change the zoom level mid-clip, i.e. you have to stop recording, change zoom level and then start again. Despite this, intelligent digital zoom is well worth noting, even though it's not a unique feature of the Lumia 800 per se.

Note that zooming videos is not mapped to the physical volume keys (as it is on Nokia's Symbian smartphones) - you have to use the on-screen icons.

The default setting is to have continuous auto-focus turned on, which is sensible since there's a huge caveat to having it turned off (other than the obvious). Auto-focus itself works by the software varying the lens position until maximum contrast is achieved across the bulk of the viewfinder. This 'in and out' process is often called 'hunting' (as in hunting for focus) and is the familiar short term blurriness and then crispness seen in any camera's auto-focus footage.

You won't find auto-focus in any professional video footage because the hunting effect is somewhat ugly, but for casual users (who generally haven't a clue about light, focus and subject distance) it's probably the best bet, since the software will try and do its best in all circumstances. The hunting operation takes around a couple of seconds and is kicked off whenever the Lumia's camera detects that enough of the subject has changed in the viewfinder.

The accuracy of auto-focus is affected adversely by light levels, as you might expect - too dark and focussing will be harder and take longer. It's also worth noting that it's not just the very centre of the viewfinder that is monitored for contrast, so you can arrive at a position (briefly shown in the clip below when shooting the second flower from the end) where you have a small object in the foreground that's out of focus and a larger subject just behind it that is in focus. As ever, the more of a handle you have on what you're doing in terms of framing and composition, and the steadier you keep the Lumia 800, the more likely the chances of good video capture.

If you really want to avoid the effects of auto-focus hunting and have a subject of constant distance then it's possible to flick auto-focus off in the settings. However, the lens gets used in the last position it was left by the continuous auto-focus, also demonstrated in the clip below, which means that you need to plan ahead slightly and auto-focus on the same (or a similar) subject prior to switching auto-focus off. With care, though, you can get good results this way.

Despite wintry weather here in the UK, I had an hour of sunshine and headed into the garden to demonstrate some of this for you. As usual with embedded footage, switch up the resolution from the picker and maximise to full-screen in order to see detail that's talked about:

Putting together the 1/3" sensor, 720p resolution and continuous auto-focus, plus a real camera shutter key to kick things off and a phone that's genuinely phone-sized (rather than superphone-sized) and which is small and relatively light, and you have a recipe for a great video phone.

Illumination is fine without excessive digital noise indoors, while auto-focus takes from a second outdoors to  couple of seconds indoors - the slight 'wobble' in the picture as the focus tracks/changes is fairly obvious but not always obtrusive. It's no worse than on all other competing camera phones and most users will happily put up with slight focus adjustments in order to have the main subject crisp most of the time.

It's true that I shoot my semi-pro Phones Show on a smartphone, but that's under strictly controlled circumstances - with good (enough) lighting and with the phone firmly tripod-mounted. I've never used continuous auto-focus because I believe that for semi-pro use the 'hunting' would be distracting from what is otherwise a very stable picture. If a Lumia 800 user were to try something similar then the trick mentioned above can be used, i.e. run auto-focus at the planned shooting distance and then, with the lens at this focus position, turn continuous auto-focus off and shoot at the new fixed focus.

In an attempt to mimic the type of ad-hoc handheld use that most users will put the Lumia 800 to, I shot a few sequences back to back when out and about yesterday and present them below as-is, unedited. I was quite impressed by the Lumia's output. Again, remember to stage up the resolution and maximise, and remember that this is also after going through YouTube's encoding. Even this latter is typical of user footage though, as YouTube would be the most common means of sharing clips with others.

Good audio is just as important as good video, of course, and as you'll hear in the clip above, it's clear enough without really impressing. Sampling is supposedly at 48kHz and the encoding is via AAC but the audio track seems flatter and more limited than that in audio from the likes of the N8. I'm pretty sure that the microphone used is similar and that Nokia can improve audio quality in a firmware update, increasing the bitrate used and improving the quality of the encoding to N8 standards - watch our news page for updates as and when they arrive over the next six months.

When you plug the Lumia 800 into a Windows PC, as with any other Windows Phone, Zune Desktop automatically copies across all captured videos (and photos) if configured that way: on the Mac, the free Windows Phone 7 Connector utility does much the same, adding a trick by also importing anything new into iPhoto. From both imports, you can drag into a video editor as needed or simply upload to YouTube on the desktop.

More potentially interesting is the totally mobile solution. Having taken a video, tap on the three 'dots' that constitute a shortcut and you'll see two sharing options. 'Share on Facebook' can be totally ignored. Just say no. As with uploading photos to this (in my opinion vastly overrated) social network, everything you upload gets downsampled massively and the result is a poor postage sized version of your original video. Just don't go here. Ever.

Tapping on 'Share...' sounds more promising. Until you see the list of options: 'Hotmail', whereupon the video is compressed and transcoded again to tiny size, for attaching to an email; 'Facebook' again - why duplicate this uploading destination?; and 'SkyDrive', whereupon your original MP4 video file gets uploaded to your space in the Cloud. At least this last option preserves the full resolution of your video and the uploading works smoothly in the background, though the SkyDrive site is very slow at delivering your video online, for later playback on another screen.

Blindingly obvious here is that there's no YouTube upload facility (let alone Vimeo or other video hosts). Yes, Google now owns YouTube and Google is Microsoft's arch rival, but YouTube is by far the dominant video host online and I can only assume that 'Share on YouTube' is another of those Windows Phone functions which hasn't been written yet, in similar fashion to Twitter being absent from the OS until the recent Mango update. Let's hope it doesn't take until Windows Phone Tango (or similar) for YouTube integration to arrive.

There's not as much for Nokia to do in terms of improving video capture. For still photography, there are more obvious issues to do with colour balance and ease of focussing, whereas for video capture the only improvements I can suggest are to do with improving audio quality. Plus, YouTube must be near the top of Microsoft's to-do list for the platform in general.

The Lumia 800 makes an excellent video capture phone for the amateur and should produce reasonable results in almost anybody's hands. In a semi-pro's hands, with good enough lighting and with a little focus lock trickery, it should also be capable of performing well - once the audio has been sorted out!

We'll be covering other uses for the Lumia 800's camera hardware, including augmented reality and code scanning, in future review parts.

In part 3 of this review, Rafe will look more at the Lumia 800's applications in general.