Depending on who you talk to, the Nokia PD-95G, otherwise known as the Lumia 1020 Camera Grip (or, hereafter in this review, just the 'grip'), is either a plastic monstrosity or a slice of engineering genius. As usual with these affairs, reality is somewhere in between. The grip is expensive, large, plastic and unwieldy, but at the same time there are some advantages and nice functionality bumps. Read on for my full review.

The concept of the grip, as you'll have gathered, is to transform the Nokia Lumia 1020 into a form factor which resembles that of a traditional DSLR camera, i.e. with a large and comfortable (right) hand hold and a nice large shutter button. I find it quite hard to visualise just who the concept is actually aimed at, mind you. Smartphone users will have already rejected the camera form factor in favour of a slim device, so why would they want to make the latter chunky again? While camera owners/lovers will already own something in this form factor, something that takes better photos.

But let's not get too negative, since there are some decent engineering touches here, aimed at giving extra value. The camera grip is available in each of the three colours that the Lumia 1020 comes in - here's the yellow version to match our yellow phone: 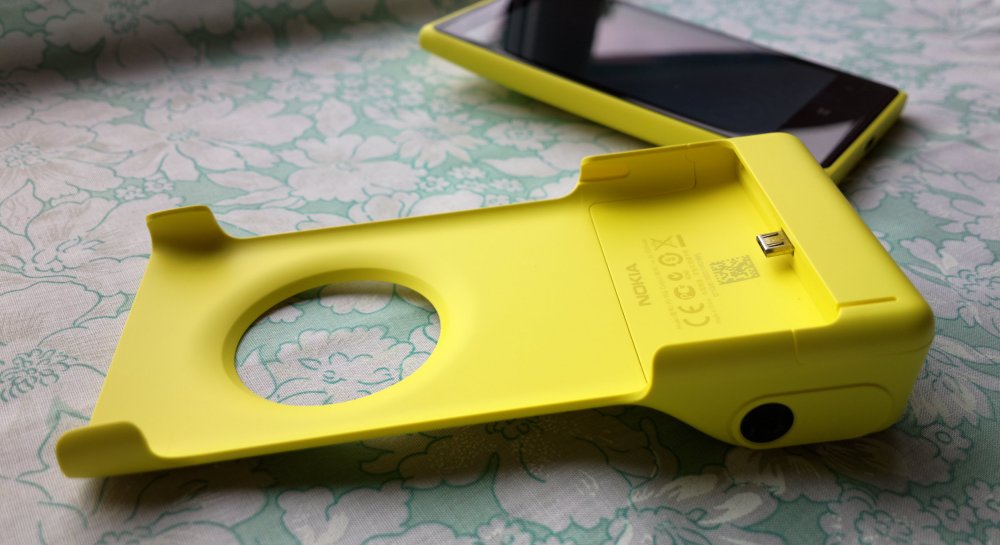 Note the phone-sized sheath, with microUSB jack at the end. The Lumia 1020 is inserted from the left, with the jack fitting inside the phone's data/charging socket, and the two left hand wrap-around clips are sufficiently flexible that they snap onto the phone and hold it very securely.

Note also the standard tripod mounting thread on the grip's bottom surface. This is somewhat unnecessary given the Lumia 1020's excellent 3-axis Optical Image Stabilisation system, but then tripod mounting might come in handy for time lapse and self-timer shots, so class this feature as a 'nice to have anyway'.

Of special note is the rather inelegant 'slot' on the grip's bottom left corner. This is so that a fitted lanyard on the 1020 can be threaded through without having to take the lanyard off just to use the grip. The system works well if you have a 'fine' threaded lanyard, but thicker cords will jam in the rather narrow slot (and in the small space beneath it): 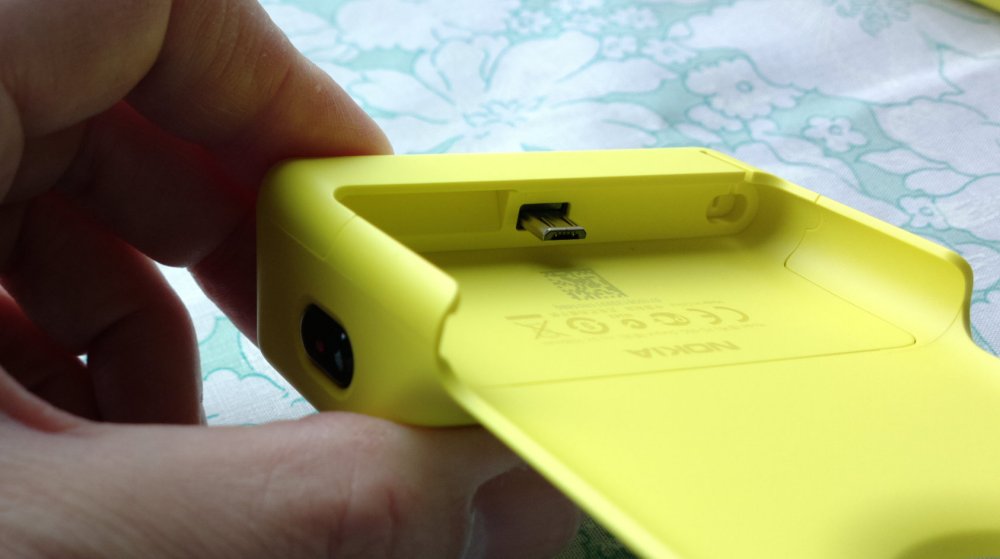 On the grip's top surface is a generously sized plastic shutter button. The feel is good, similar to that on the phone itself but much larger, so no complaints here. There's no mechanical linkage - it seems that the button makes an electrical connection through the microUSB jack, with the Lumia 1020 itself programmed at the OS level to map these extra signals as half presses, presses and long presses of the main phone camera shutter button. 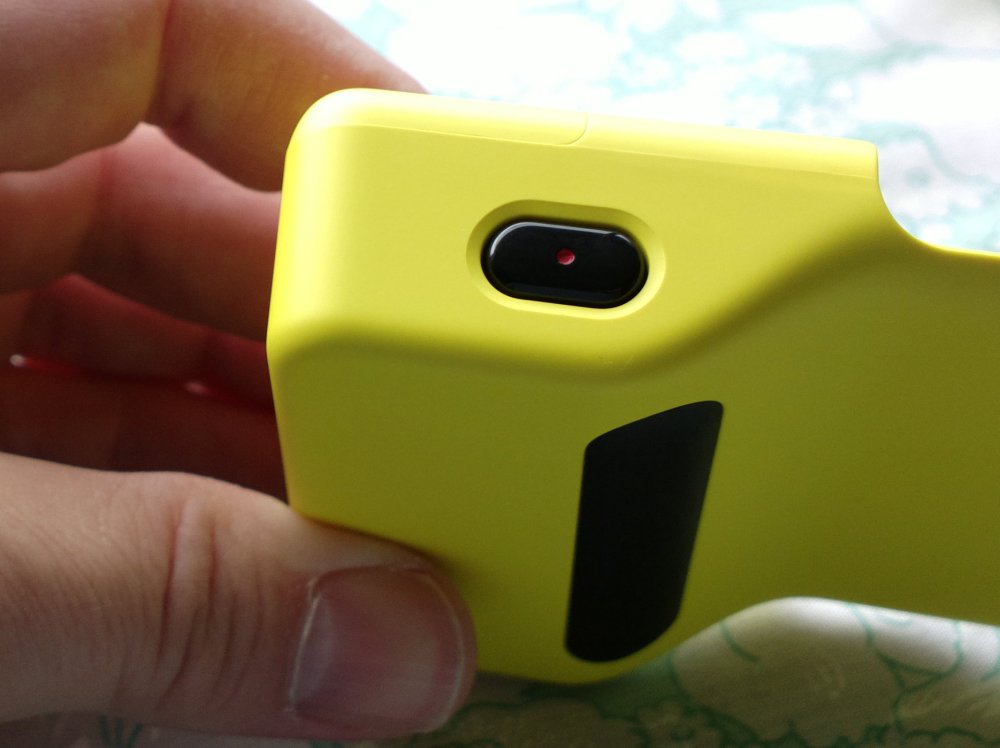 Note the black strip too, slightly raised and coated in very grippy rubber, providing a place for your right hand middle and fourth fingers to rest.

Finally, on the grip's bottom flat surface there's the main hidden 'extra', a 1020mAh Li-Ion battery, charged through the microUSB socket shown and ploughing whatever charge it has into the Lumia 1020 at every opportunity. So, providing you keep the grip charged up and ready, slotting the phone in will instantly start charging it, up to around 40% extra capacity. A small (recessed) button shows the current charge state of the internal battery via a row of LEDs, which also animate when charging: 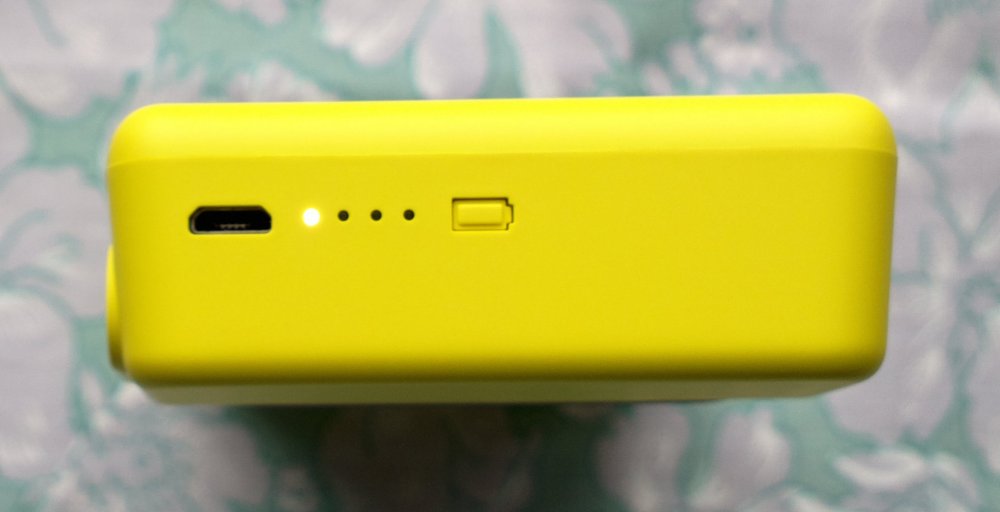 In use, the phone+grip combination feels very solid, though the weight balance is slightly 'wrong' when compared to a real DSLR. Plus you don't have several centimetres of expanding optics sticking out the front, of course! 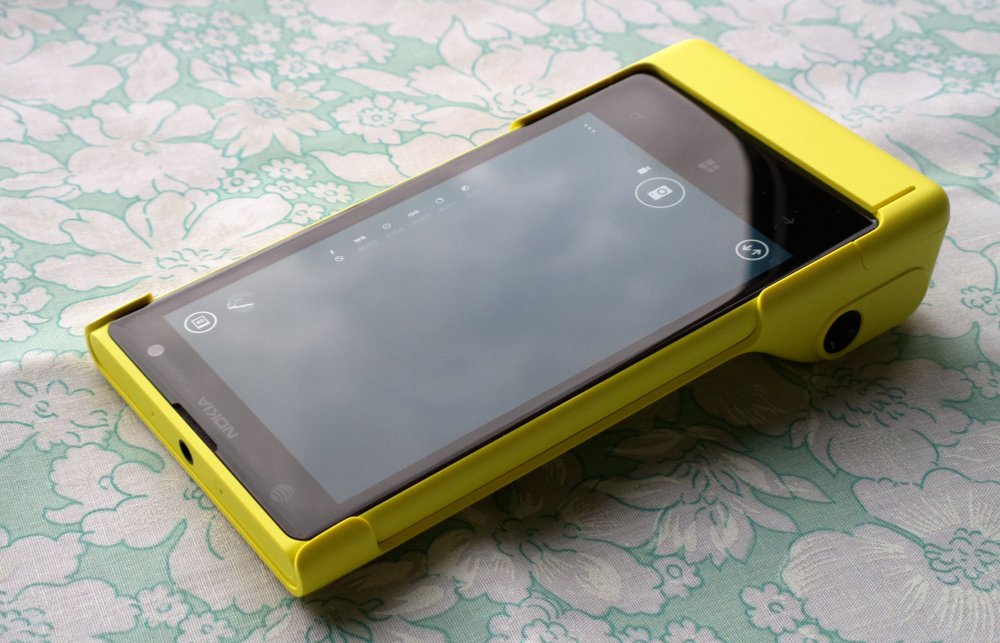 With the grip in place, the natural way to use the combination is with the right hand taking most of the weight and controlling the action - no doubt left handers have had to get used to right handed DSLRs for years, so this should be no different.

The electrical mapping of the shutter key is faultless and instant and camera control works very well indeed.

So far so good, but as well constructed as the PD-95G grip is, even after a week of use I can't shake the (personal) feeling that it's either not really needed - or could have been better:

The concept of an internal battery which can boost the state of the 1020's charge is a good one, but there's a fundamental problem. As shown in the photo (third above), this extra battery always transfers as much charge as it can to the phone, meaning that for the vast majority of the battery's life it'll exist at a very low voltage state - something which is very bad for longevity of Li-Ion batteries. Of course, if the user remembers to plug it in to recharge every time they get back from a photo shoot then there won't be a problem. I'm sceptical though - would you remember?

Given the bulk of the grip, I'm disappointed in the low 1020mAh capacity of the internal battery - I'd have guessed that something twice the capacity could have been squeezed in, giving a much bigger potential boost to what is already quite a battery hungry smartphone. Perhaps the capacity issue was one of cost? Or perhaps there are internal obstructions to putting in a standard 2000mAh cell? Either way, an extra 1020mAh is welcome but relatively small and not massively more than you'd get from a wallet-based emergency charger.

It's a doddle to insert the Lumia 1020 into the grip - it's much harder to get it out again. The trick is to forcibly ease one of the top corners off, then do the same with its twin, hoping that the first one doesn't pop back again. Then, with both corners 'off', you pull the 1020 away from the jack end and off its connector. It's fiddly and not something you'd want to try without being seated somewhere in comfort.

Just like Bluetooth headsets/speakers, the PD-95G grip is one more thing to remember to charge (a stored charge will gradually leak out over a few months in storage) and one more thing to have to store in your pockets/briefcase/holdall. Yes, you can use it without using the charging element, in fairness, but this seems somewhat wasteful of the technology you're purchased.

The acid question is whether the above worries, whether the perceived benefits (comfort, charge), whether the extra cost (around £50 at the moment in the UK), are all worth bothering with, given the existing excellent ergonomics of the Lumia 1020 as-is. After all, with the central lens placement, the comfortable edges of the phone, the excellent integrated shutter key and the OIS helping fix handling issues, is there a need for an extra prosthetic for the Lumia 1020?

For me personally, the answer's 'no', but preferred form factor is always a personal call and I can see how some might find the grip very useful in giving confidence about holding the 1020 and taking stable photos. For them, the grip will make sense, with the extra charge being perhaps the icing on the cake.

Comments welcome. Do you think the Lumia 1020 needs this accessory? Is it the must-have accessory that you've been waiting for?

The Nokia PD-95G is available now. It's being carried as an accessory by select operators, but is also available from the usual online retails. For example, it is available from both Amazon UK or Amazon US. Expect to pay around £44 / $75.