Billed as the first proper video editor for Windows Phone, Movie Maker 8.1 has iterated rapidly and, with the current version, now seemed fully featured enough to warrant using it for real and attempting a full review. Summary? It's more capable than you might think, but there are still rough edges - it's well worth snapping up even now, but expect another month or so of development before it's finally 'done'.

Getting going is easy enough, hit the big fat 'plus' sign and you're into selecting all the still and video resources you need: 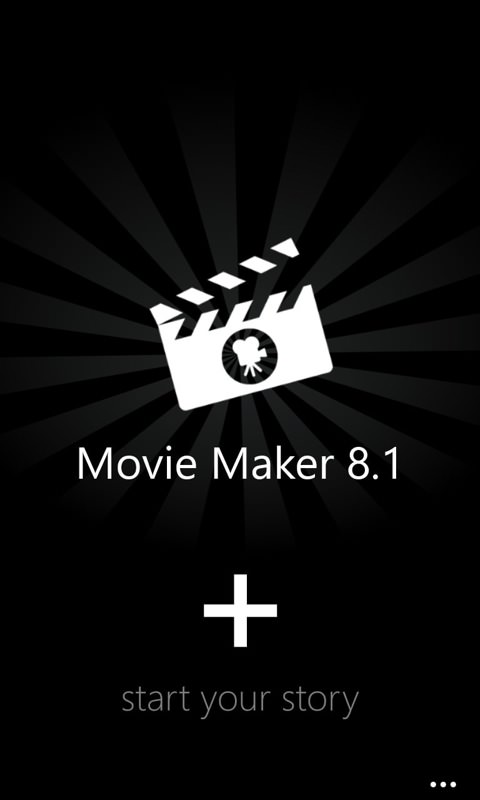 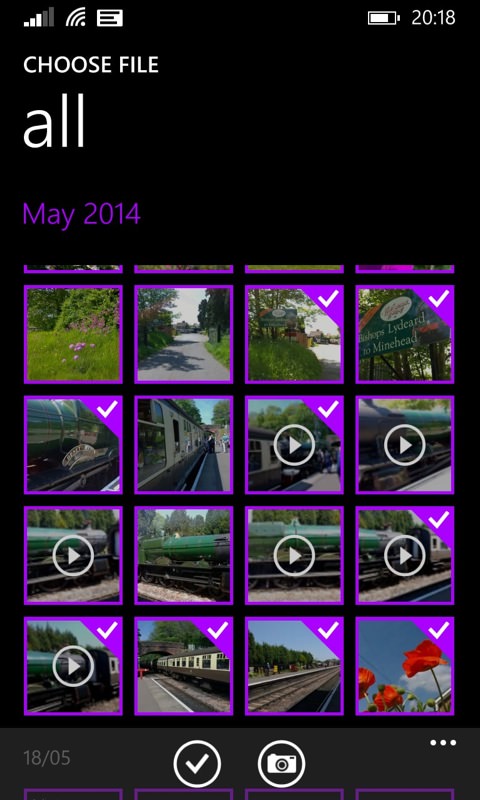 Somewhat oddly, the chronological order of the resources isn't maintained when building the project - it's not clear whether this was a design decision, but having all stills relegated to the end of the project wasn't helpful in my case. It's also worth noting that resources are allocated roughly as much space on the tiny (non-zoomable) timeline as their duration suggests, resulting in stills which were no more than thin lines in my case.

There are two ways to get stills elsewhere in the timeline - by copying and pasting and then deleting the original, or by repeated use of the 'Move' function, which nudges the item left or right one slot. Both methods are clumsy and, in the absence of proper ordering of resources in the first place, I sorely missed a 'Cut' function - or perhaps drag and drop in the timeline. 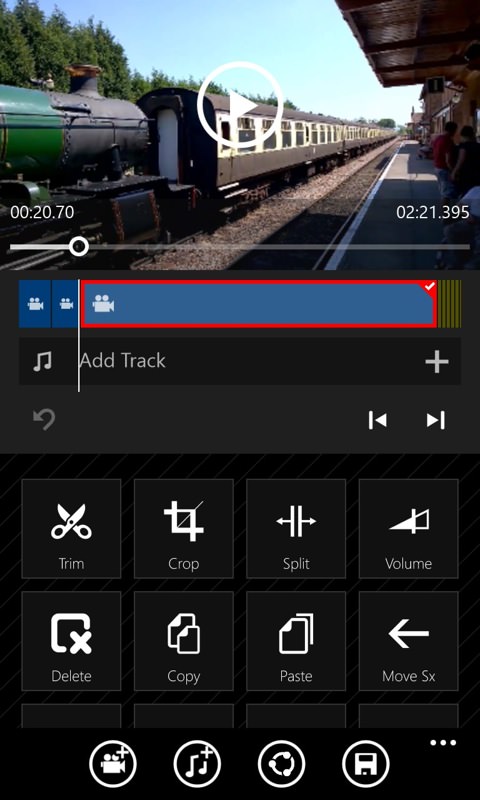 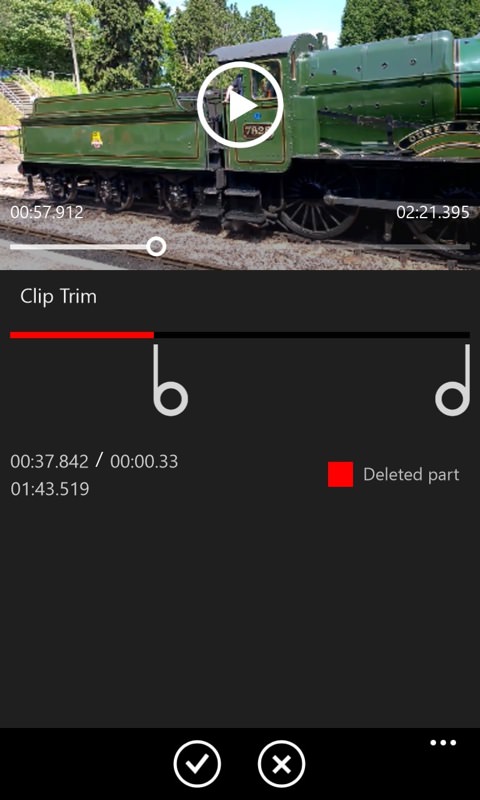 Video resources are easily trimmed, with draggable end sliders, making it easy to just get the bits you want included. Still images come in with one second duration by default, but you can adjust one or all images in a project with the slightly clumsy 'Duration' and 'All durations' controls. A significant omission is a 'Ken Burns' pan and zoom effect - this is the single biggest characteristic of a professional video when handling stills and surely wouldn't be too difficult to implement here? 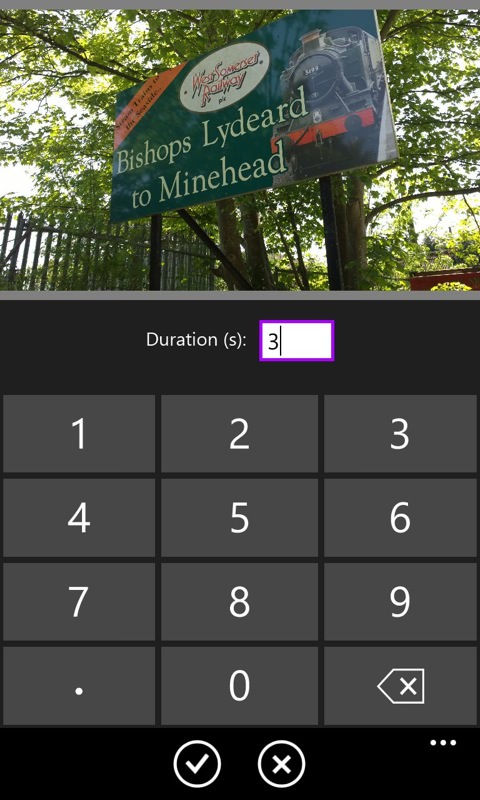 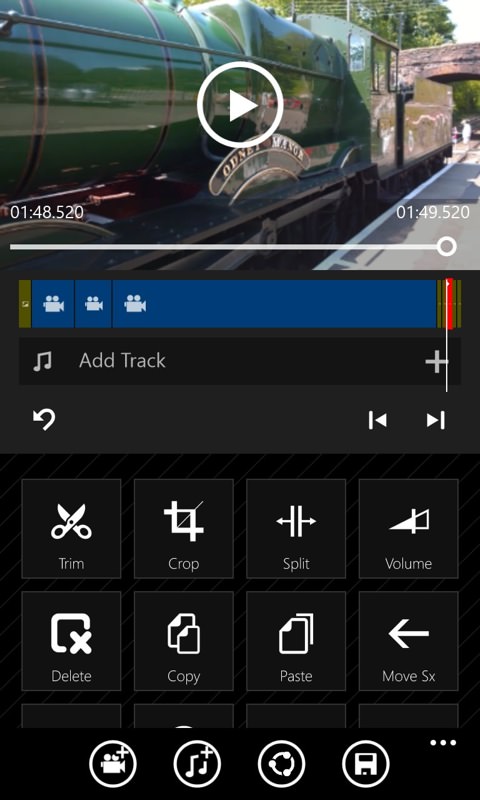 Adding audio to your project means voice and music - but not together, i.e. overlaid at the same time. Adding a voice note is easy enough, just position the marker in the timeline and hit the 'Voice note' control - unfortunately there's no playback on-screen while recording, so you have to keep notes short and guess what's happening in the video!

More disconcertingly, the Windows Phone screen power save kicks in on cue and stops playback, losing your recording so far, so you have to keep tapping the screen every few seconds to stop this happening! I'm sure disabling of screen locking can be added in a future version. 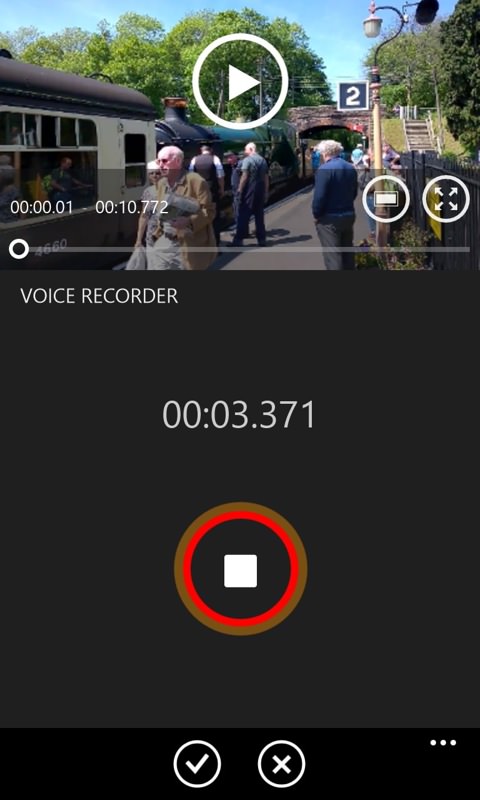 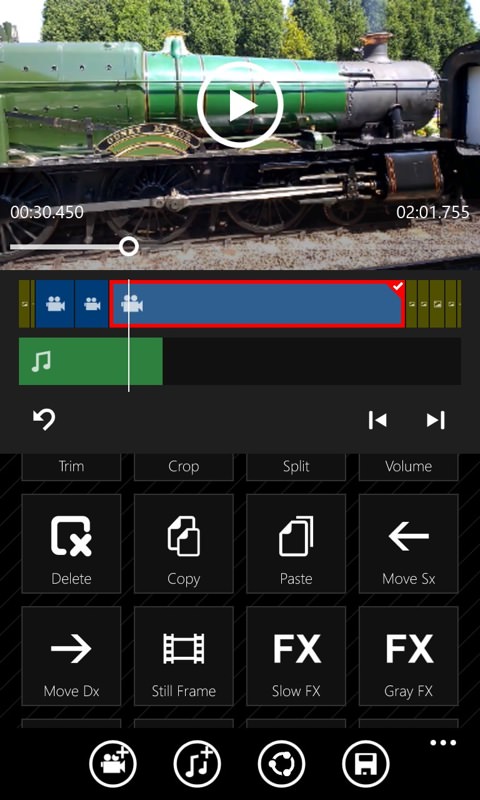 If you need music overlaid, you can do so as long as you keep the tracks clear of any voice notes - get this wrong and your voice notes are over-written... and lost forever. But, used carefully, the overlaying does work, plus it's easy to use the supplied 'Volume' control to 'duck' the volume of the underlying clips as needed (in this case muting the very loud steam train!)

When it comes time to save your work, there are two options - rendering out ('Save') to MP4 or using 'Save project'. And this is where Movie Maker 8.1 is currently at its most buggy, as we'll see. I experienced several crashes at these stages (back to the application launch screen) and lost data on several occasions. Movie Maker 8.1 does its best to auto-save as it goes along, with 'continue last project' on the opening menu, to help with just such an eventuality, but the process isn't foolproof. 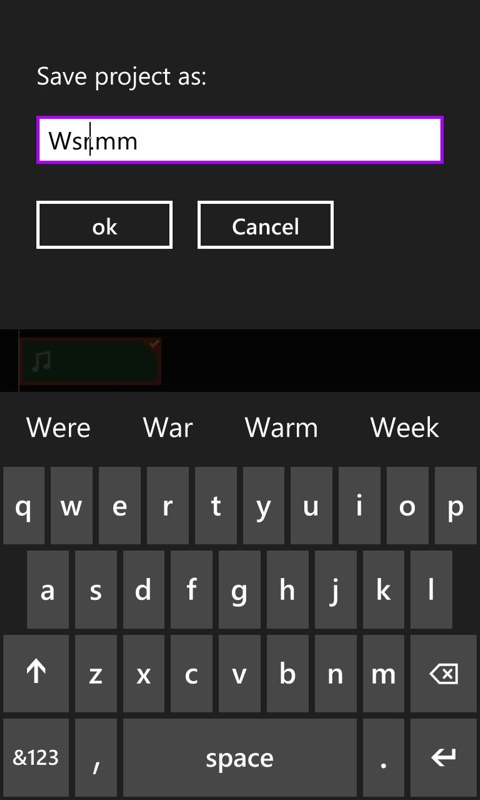 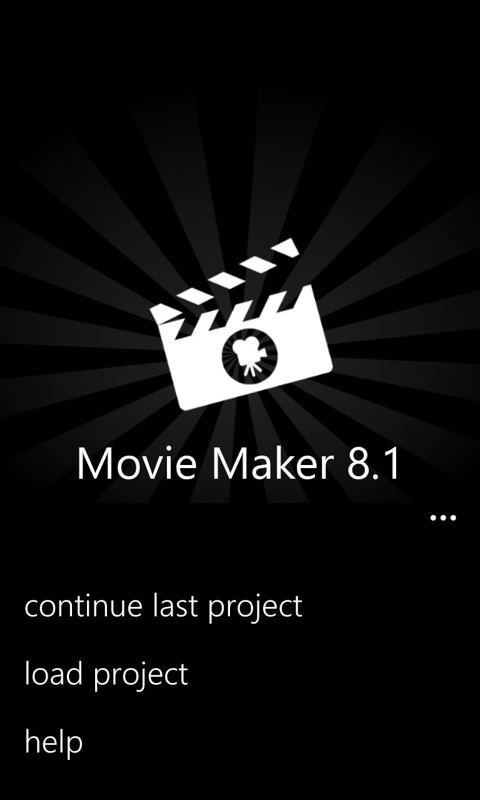 Saving to MP4 can be done at original resolution ('Auto') or at any other appropriate resolution, which is handy - for example of you want to send a smaller file by email. There's also the option of 'fast' or 'precise' rendering - it's not clear of the tradeoffs here, but I opted for 'HD1080p' and 'precise' in the demo video render embedded below. 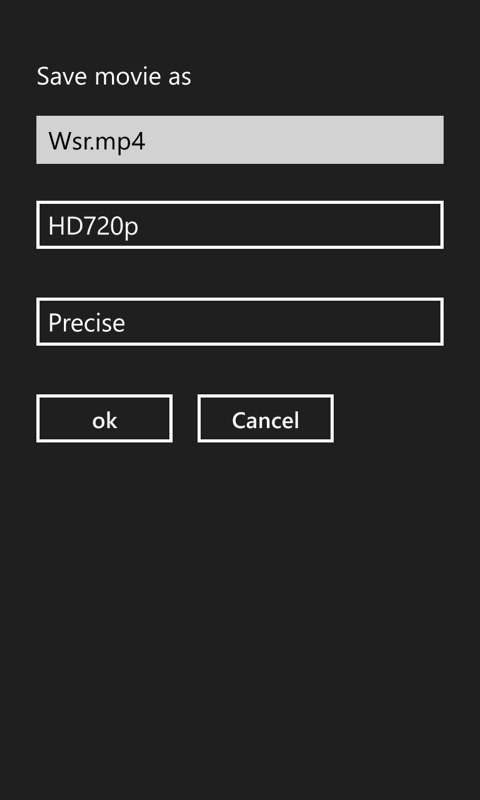 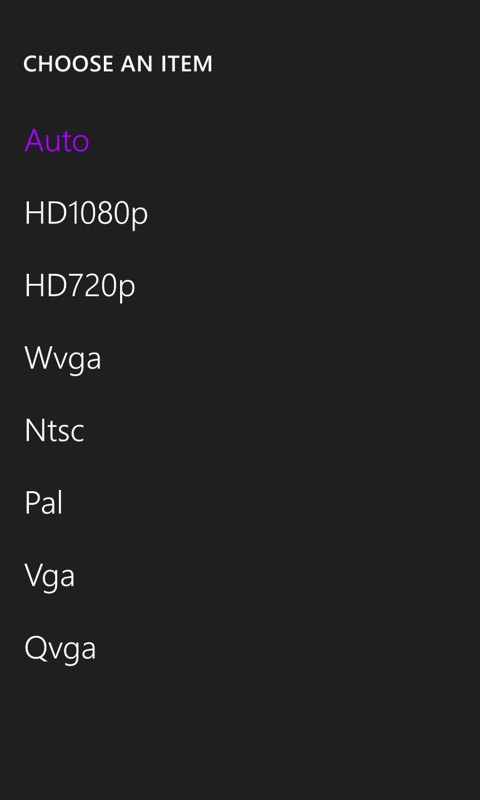 Start the video playing, then maximise the window and adjust the resolution upwards to suit your bandwidth:

Pretty impressive from a smartphone, 'on the fly', as it were, even with the caveats above.

Although not used in this example, there are weird and wacky image and video effects available - most of which are just novelties (in my purist eyes, at least), though the 'Slow FX' slow motion system might be useful for a brief bit of action, I guess. 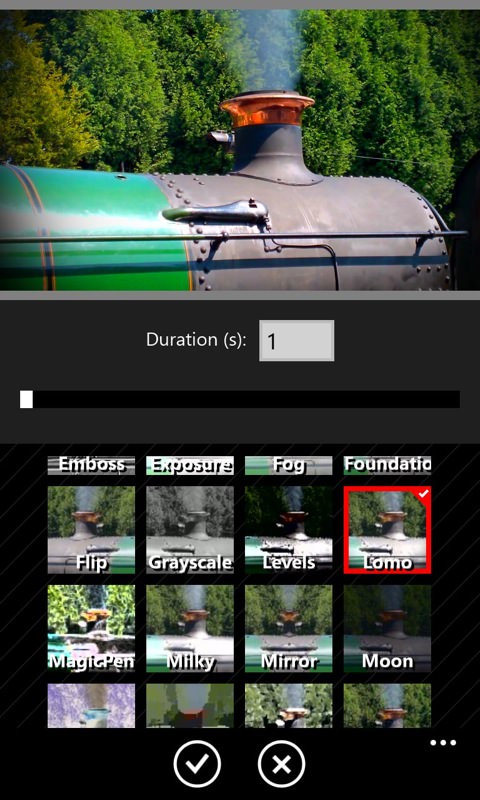 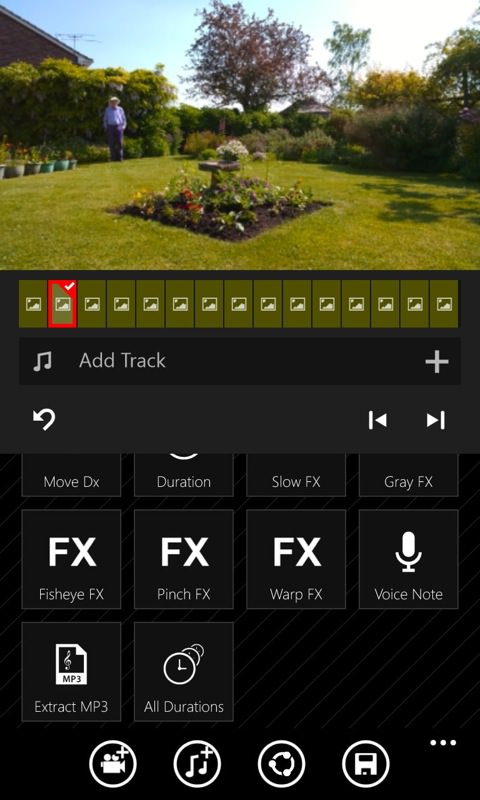 But, having produced a decent video render, the cracks started to show around the seams in this version of Movie Maker 8.1, again showing that it still has some way to go before it's ready for mission critical use on Windows Phone. Upon restarting the application, after a few hours, to make changes to the project, I was unable to open my saved projects at all, getting an error on each and with the 'continue' option only bringing up a very old auto-saved version.

Video editing on a phone is never going to be easy and I do want to cut Movie Maker 8.1 some slack here - it's clear that it will continue to be fixed up as needed. But do exercise caution before saving work for later perusal. At the moment, it's best to do the editing in one session and at least render out what you can to MP4 - just in case! 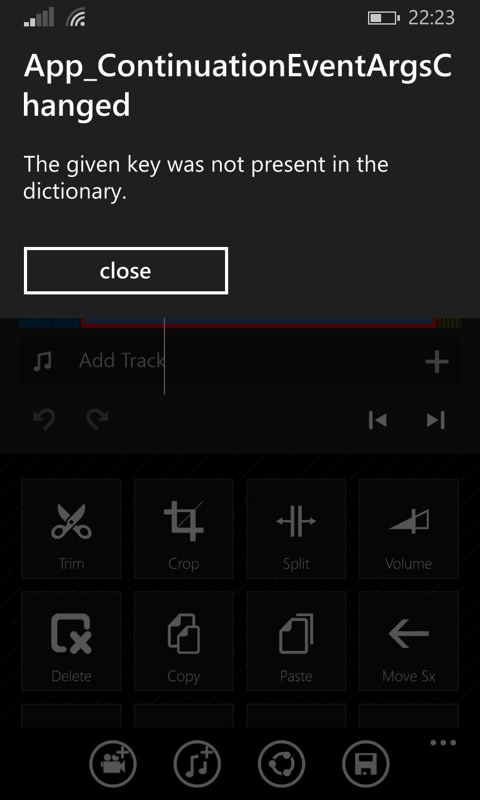 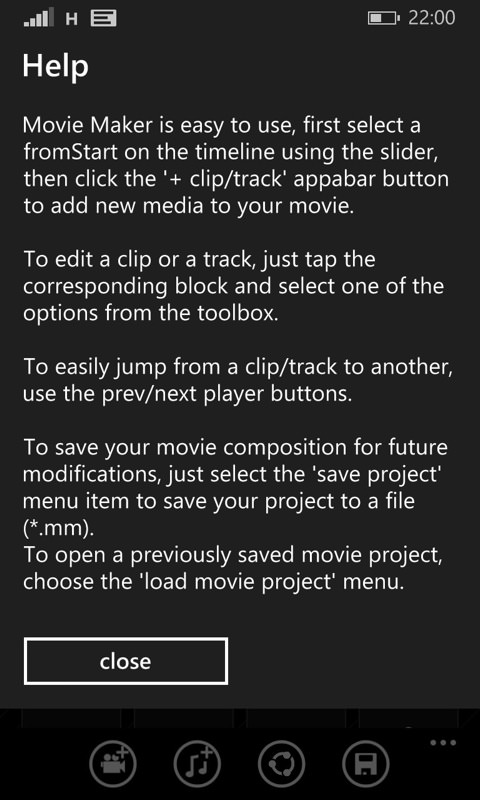 Other oddities include a 'share' button on the main toolbar that does absolutely nothing(!) and a Help screen that's nothing more then a few paragraphs of text - other applications now put up at least annotated screenshots explaining the interface and I'd expect something much glossier in due course from the developer.

Movie Maker 8.1 does well to get as far as it does, considering the (relative) restrictions of the platform it's running on, but it's not quite 'there' yet for me. Huge promise though, and it's going to be a permanent fixture on my Lumia 1020 from now on. Recommended.