It's... Google Play Music - on your Windows 10 Mobile phone! Which is an impressive accomplishment, dented only by the fact that I've been tracking this UWP application for over a year now and only now with the latest update has it become stable enough to recommend to others. Streaming music from Google's servers, just in case you'd put your music in that other ecosystem?(!)

It's a fair cop, I'm not a paid up subscriber to any music service - I have 30GB or so of music on my microSD card on my main phone-of-the-day, for perfect offline listening. Butwhat about when I'm on other devices? A tablet, another phone, a borrowed laptop, and so on? The answer, of course, is that I have my entire collection uploaded (about three years ago) to the cloud. In this case Google launched Play Music, with no limits on storage for your own music - at the time, I didn't have Office 365 and my OneDrive allocation wouldn't have been close to coping, so I went with Google and let my desktop spend about a week non-stop uploading every track I owned or had digitised to the cloud.

Job done, I thought, and I could then play any track from anywhere, as long as I had a desktop class web browser and/or a Google Play Music client. But there was a hole in my strategy and it's a rather obvious one. Although my main Windows Phone/Windows 10 Mobile phone had that microSD and thus all my music, what about other Windows 10 Mobile smartphones I might be playing with or reviewing? No Google Music for me then...

Not that this is a serious problem and in the intervening years I've also put up my favourite 10GB or so of music also up into Microsoft's cloud, i.e. within my OneDrive, and it's trivial to play from here too, via Groove Music, which is always pretty convenient. So I'm always entertained.

However, I've been keeping my eye on Media Player for gMusic Pro over the years and now it seems to finally work as advertised. There's still a few seconds pause initially, while it loads your Google Music Library file, and then a few seconds pause again before each track, while it downloads, but nothing too untoward. 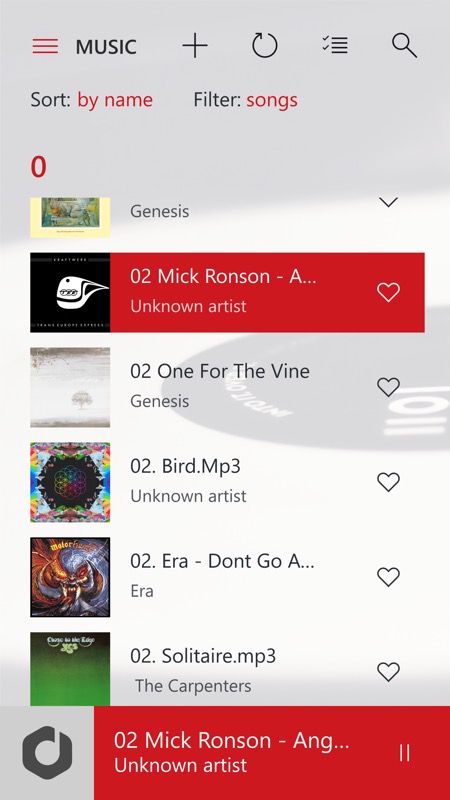 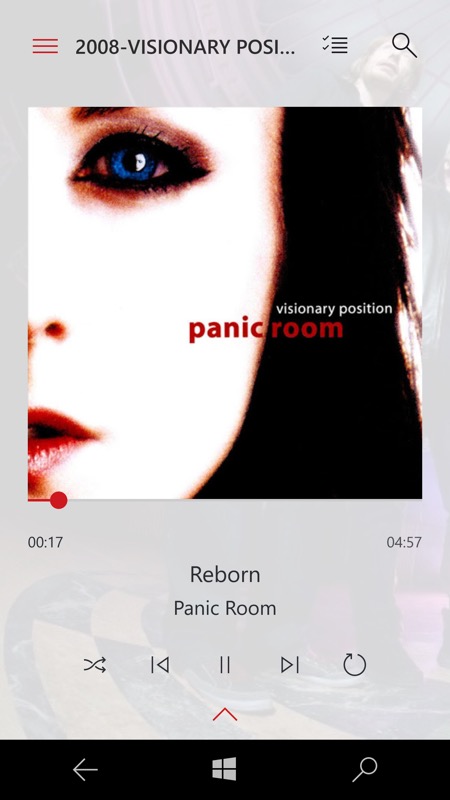 A standard and familiar layout (though with no dark theme - boo!) - hamburger menu, filters and controls, main scrollable content and a 'now playing' banner at the bottom; (right) The playback pane is also clear, with large album art and shuffle/repeat controls. 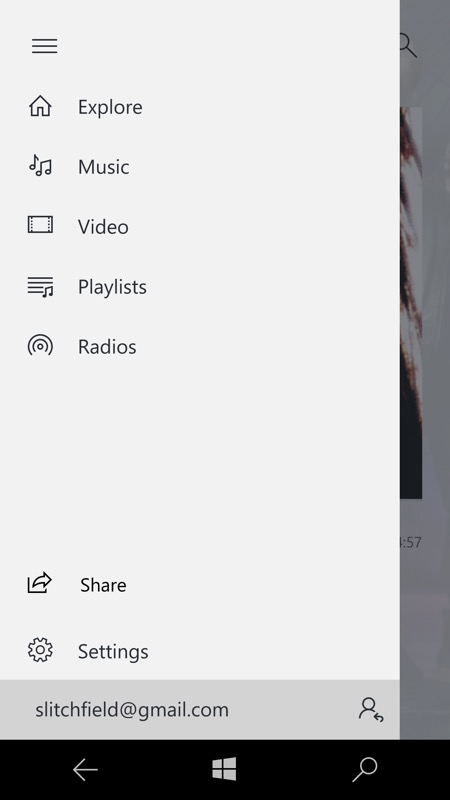 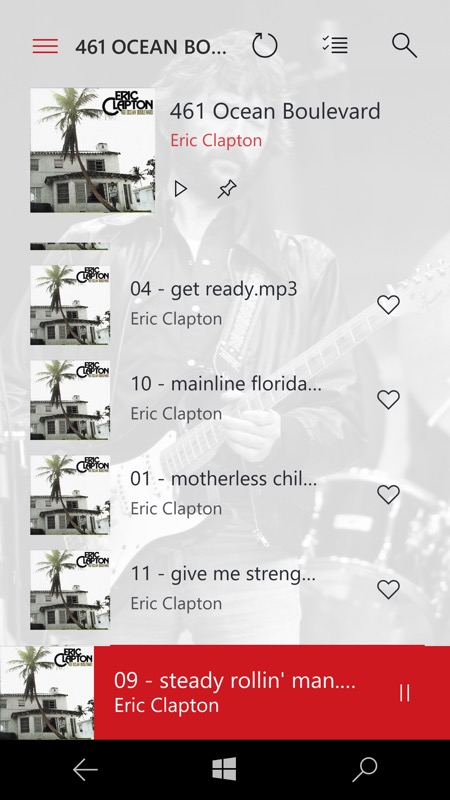 The hamburger menu is clear too - note that both Music and Video also include any local content on your phone, so this might be an all-in-one solution if you want to ditch Groove Music and Films & Tv for some reason. I wouldn't recommend it though - keep this for your Google music content. (right) playing through an album - note how artist art is automatically grabbed from Google to place in the background, behind the track listing! 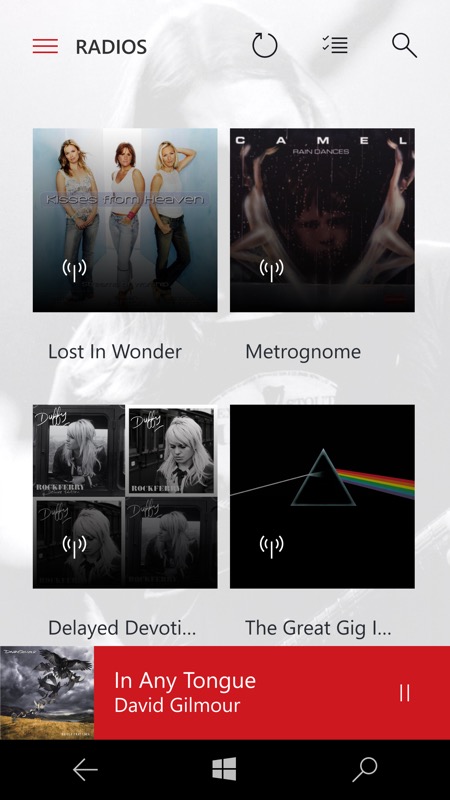 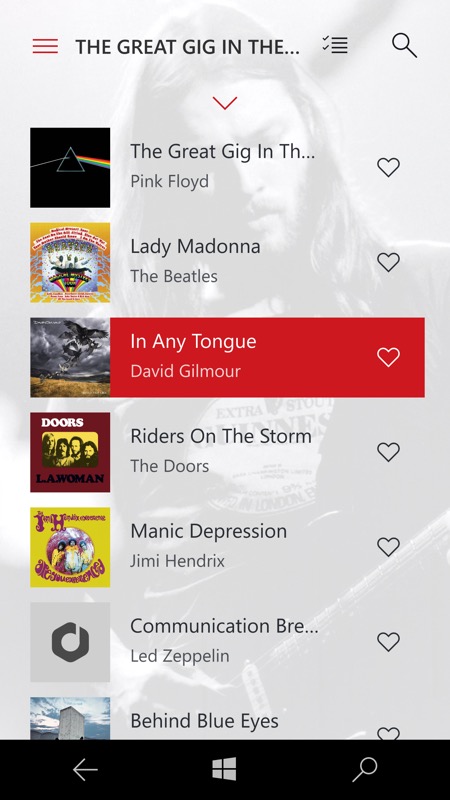 'Radios' presents auto-curated playlists based on tracks in your collection - it's all a bit hit and miss, but it does throw up some interesting track combinations, as on the right here! 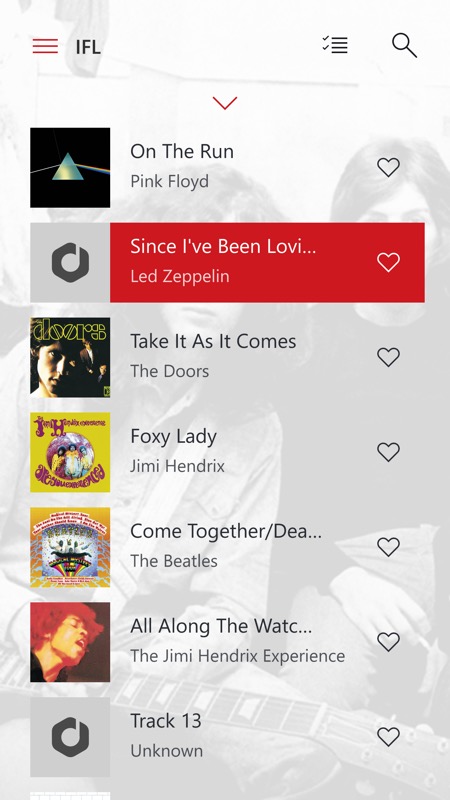 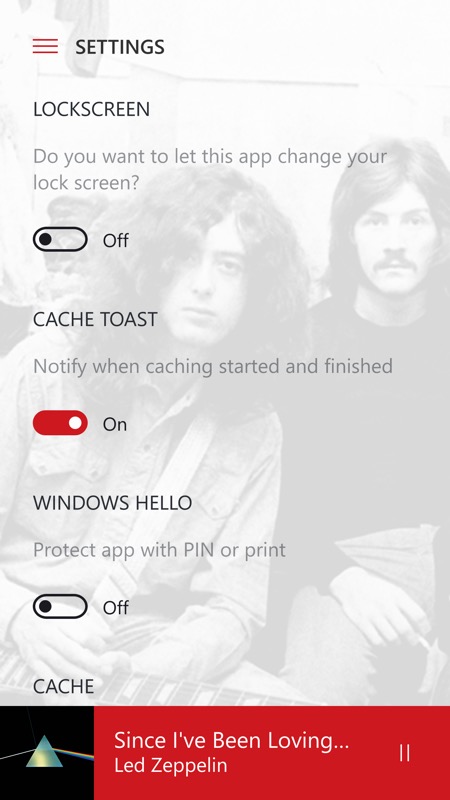 The "I'm feeling lucky" radio playlist is even more scattershot, but it's coming from your own music collection, so presumably you like it all! (right) there's a 'cache toast', but it didn't work for me, better to just wait til the flying 'progress' dots had finished! 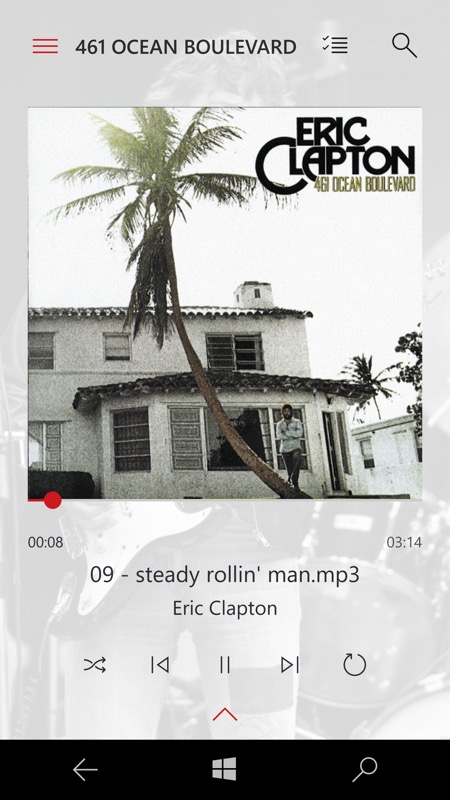 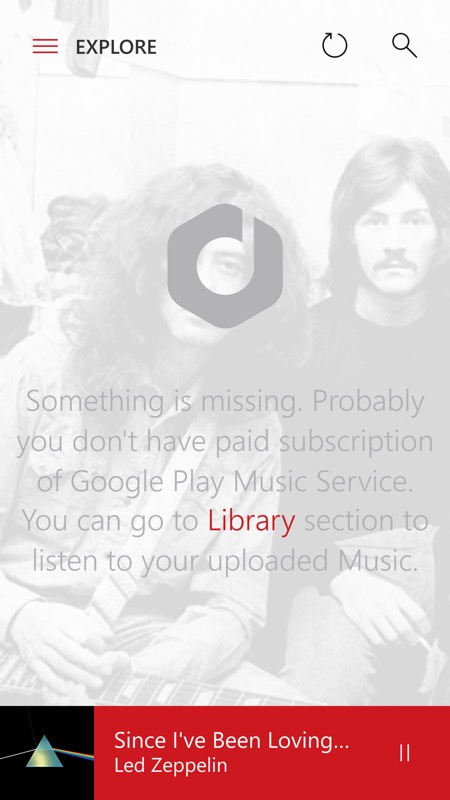 The overall UI is clear and effective though - the artist art is a rather splendid idea and I get that a dark theme would put paid to this, but it's a setting I'd still like to see. (right) If you're a paid Google Play Music subscriber then you can 'Explore' millions of other tracks on demand too...

The screenshots above show the app sometimes with Windows 10 virtual controls and sometimes without - it's a personal thing, though the 'back' control does come in handy. Although this ia a UWP application, it didn't work fully via Continuum, so there's clearly a little work left to do for the developer.

I do get the impression that Media Player for gMusic Pro is less than 100% stable, and you do need to generate an 'app password' for it on google.com in order to be able to log in, in the first place, but this is bearable and once things are working, they work fairly smoothly - cover art aside!

Your comments welcome on how this performs with your own Google Music library in the cloud - how fast and/or stable is it for you?