Flash card apps are perennially popular on all computing platforms, partly because they're relatively easy to program and partly because they're genuinely useful when trying to memorise long data sets (e.g. foreign language words). Anki Universal is created to access AnkiWeb flash card 'decks', of which there are thousands online - that this is also an almost perfect UWP application for all Windows 10 devices, polished to within an inch of its life, and also completely free, boggles the mind...

The idea then is that flash cards help you learn, and a decent application (like this) will present items in random order and with appropriate frequency for you to test yourself, whether vocabulary or facts. Hundreds of deck authors have compiled thousands of sets/decks of cards on many topics so there's a good chance that you won't have to create your own (though that's possible too within Anki Universal). 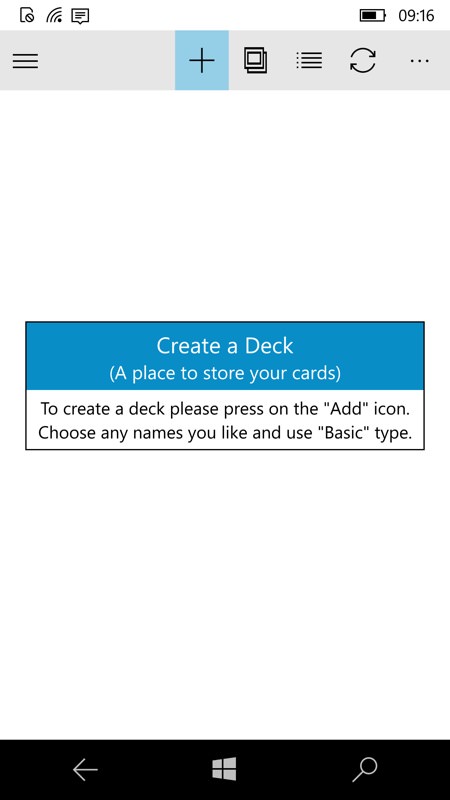 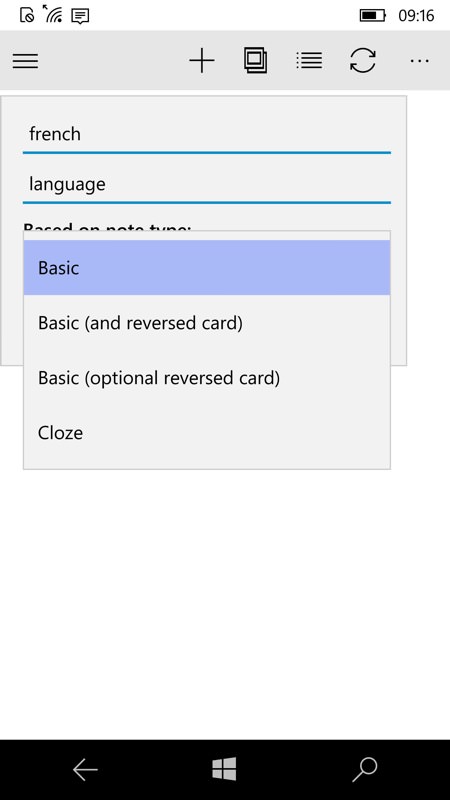 The BEST tutorial system I've ever seen on a UWP application. It prompts and yet is 'live' at the same time, talking you through typical initial actions, here creating a flash card revision deck. 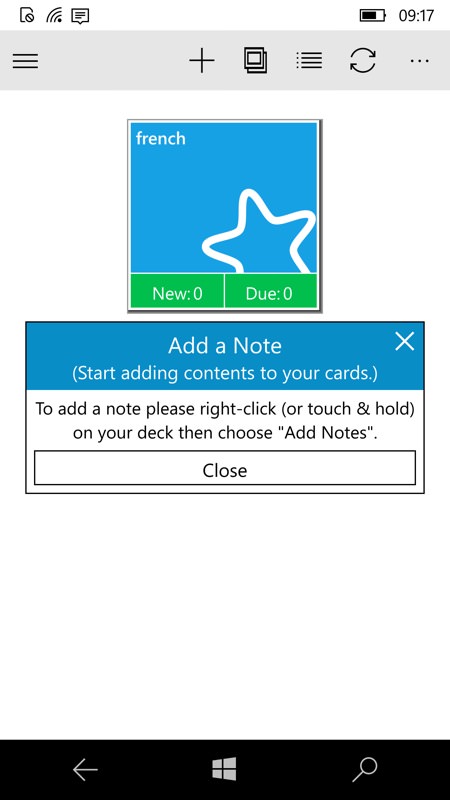 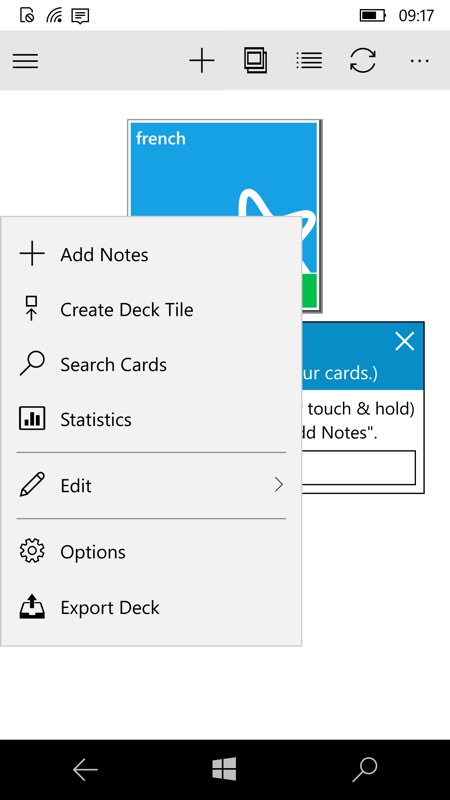 From top toolbar to pop-up menus to (later) hamburger navigation and dark theme, Anki Universal has the lot in terms of user interface. Here I'm long pressing on a deck to bring up the menu and then add a new note/card. 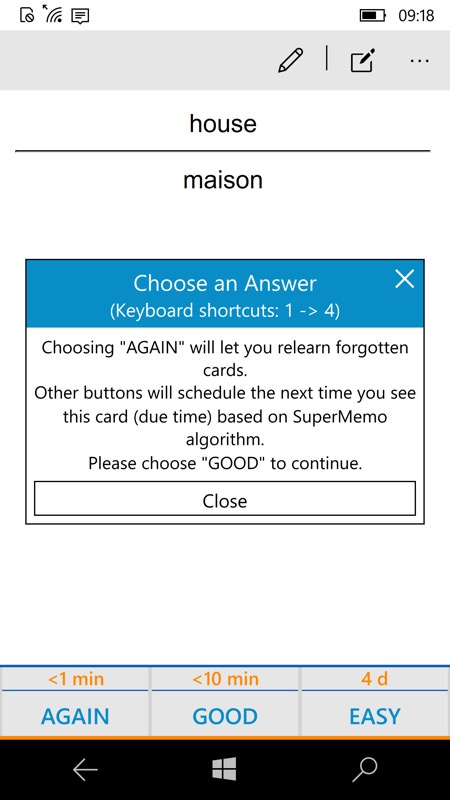 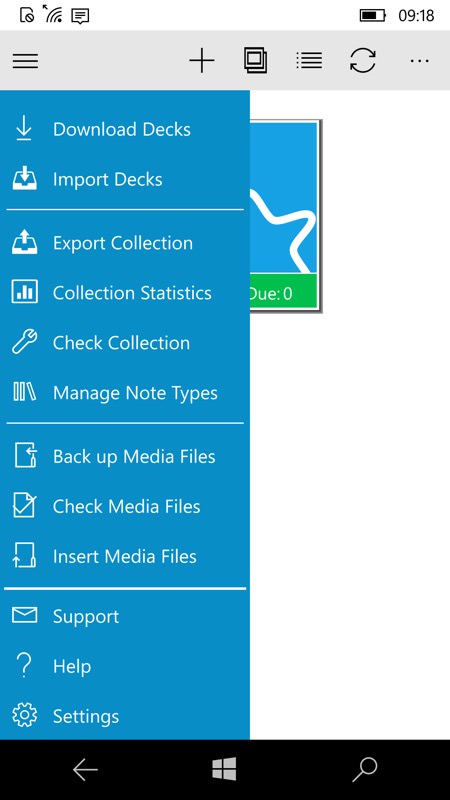 When testing yourself with a card later, as the tutorial indicates, you can decide at checking time how hard the 'question' was and how often you want to be tested with it. Your responses are remembered and cards scheduled appropriately; (right) the hamburger menu, your way into Help, Import/Export, and (below) Settings... 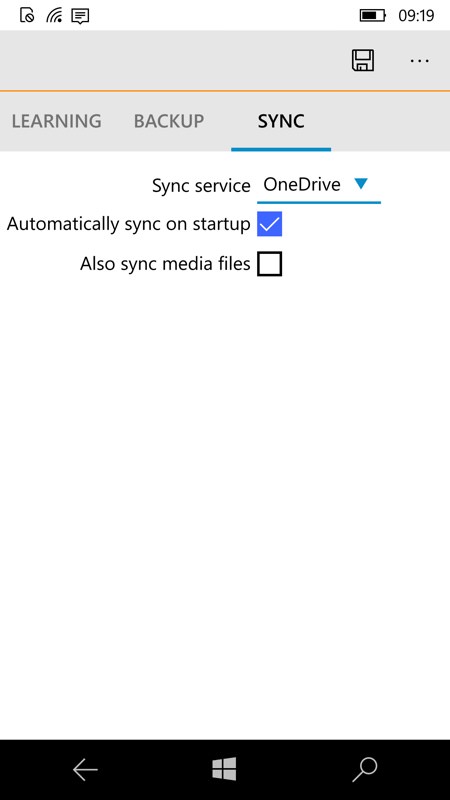 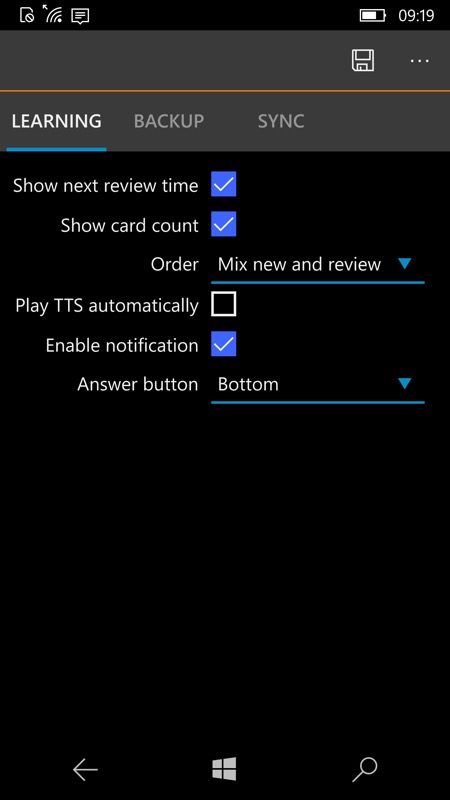 Slightly hidden on the '...' menu is a day/night theme switch. A little odd, but it works. Note also the syncing of your decks and progress/scheduling via OneDrive, so you can carry on revision on another Windows 10 device. 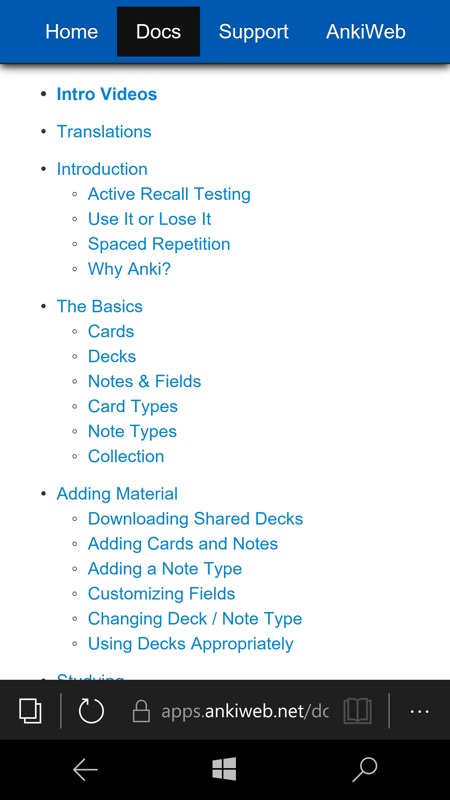 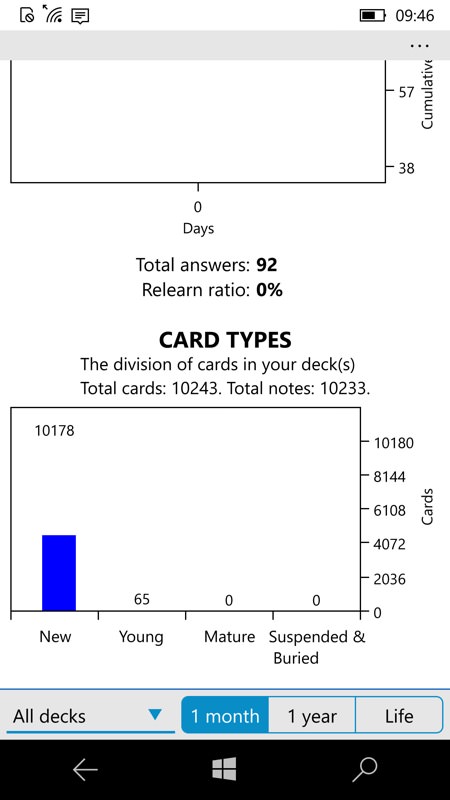 The Help function on the hamburger menu leads to a comprehensive online help hierarchy - nicely integrated, even though all the hypertext needs a connection and launches in Edge; (right) a Statistics view looks at all aspects of your card decks, either one by one or as a whole - how far have you progressed, how much is still to come and how hard is it, etc? 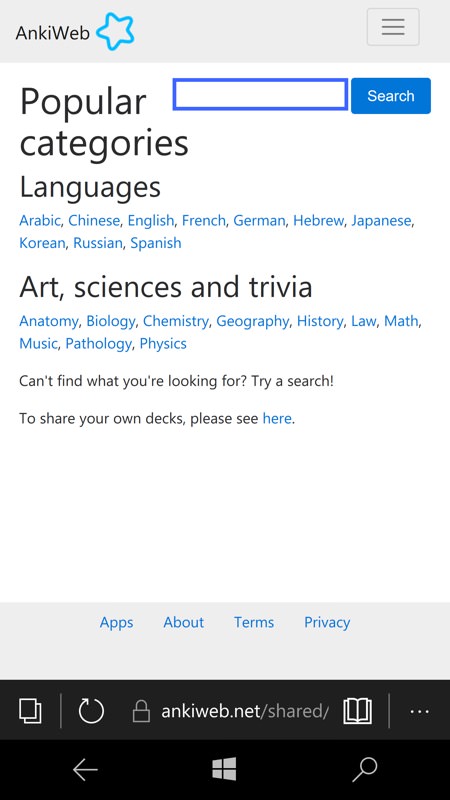 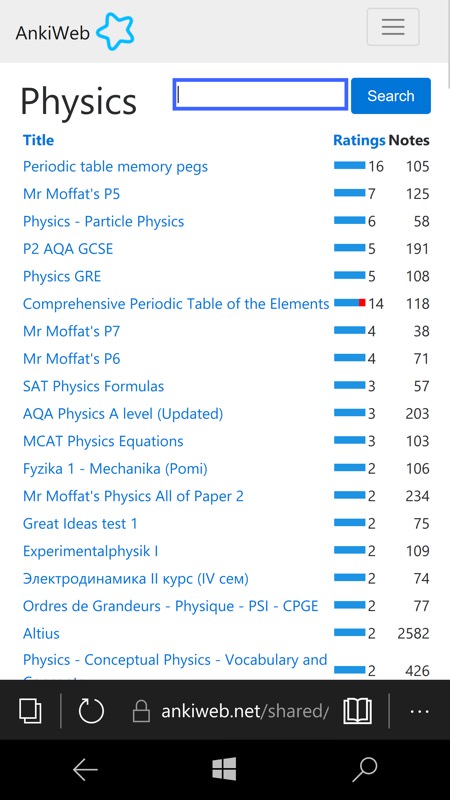 Happily, there may be no need to create your own card deck or try and manipulate an existing CSV file, since sites like ankiweb.net offer hundreds, even thousands of pre-compiled card decks covering the subbjects and languages shown. 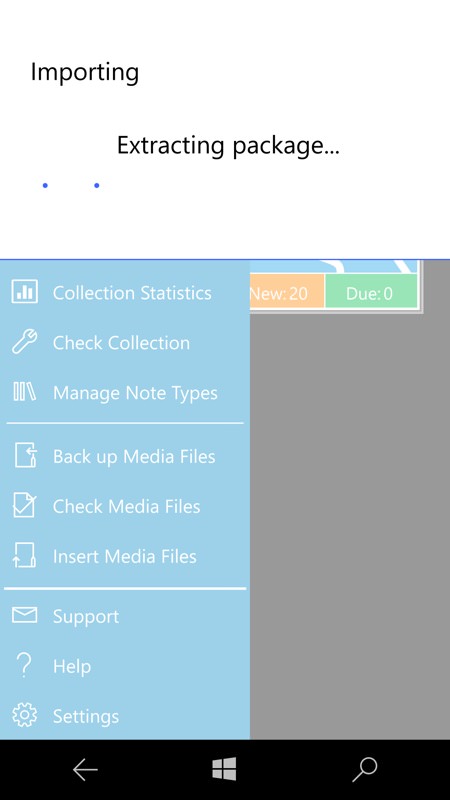 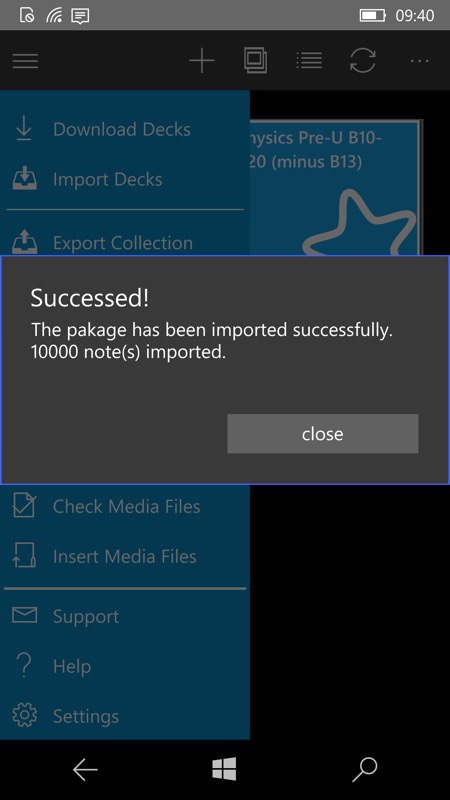 After downloading a deck to your local storage on the (e.g.) Lumia, just use the hamburger menu 'Import' function and pick the file to have it imported. This takes a minute or so for larger decks - here (right) two minutes for a 10,000 note deck!! 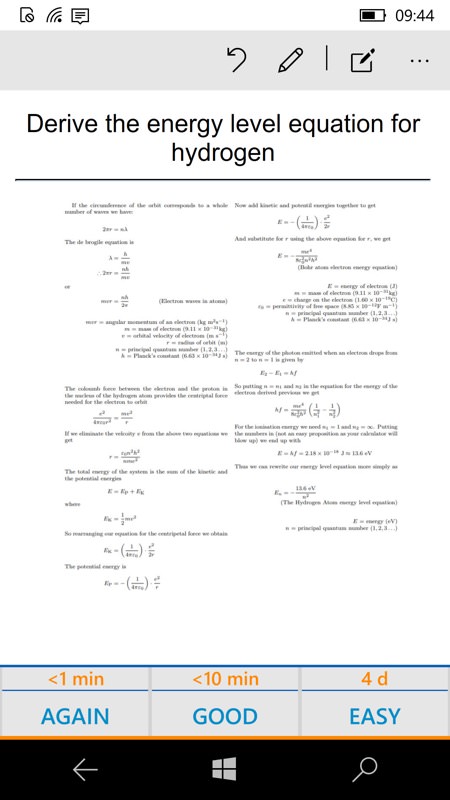 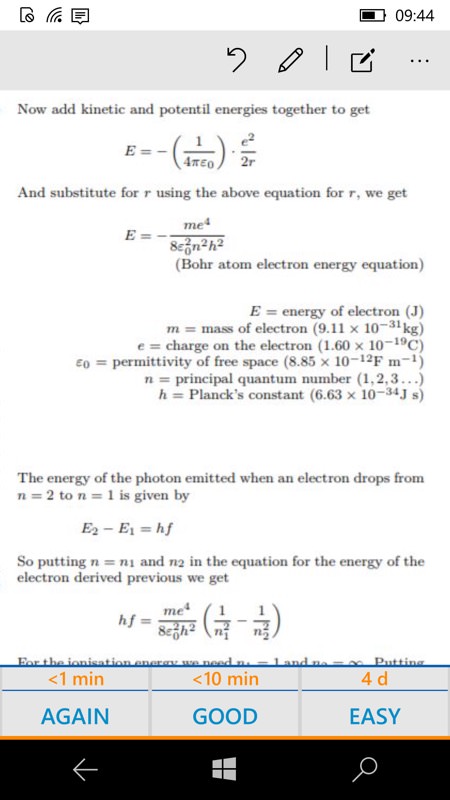 Most of the card decks are textual, but media is also supported. Some of the more complex, as here, are a large graphic (for obvious reasons) but you can multi-touch zoom in to read everything as large as you like. Note that graphical content like this can't be read in dark/night mode, so you may have to toggle this setting depending on the deck you're using. A minor quirk. 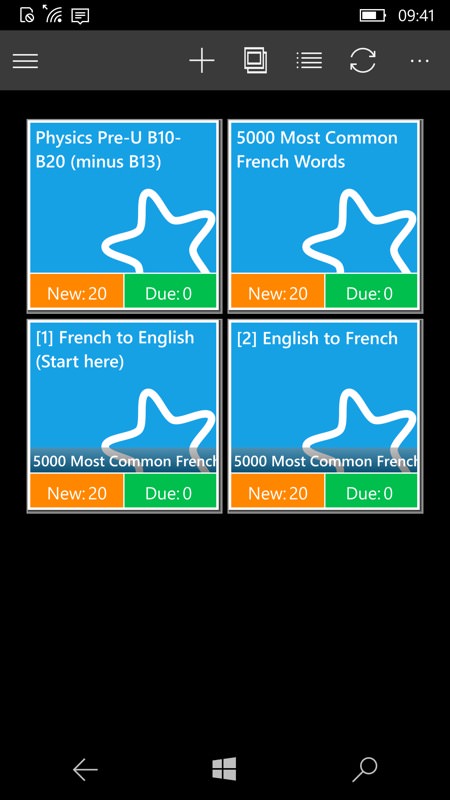 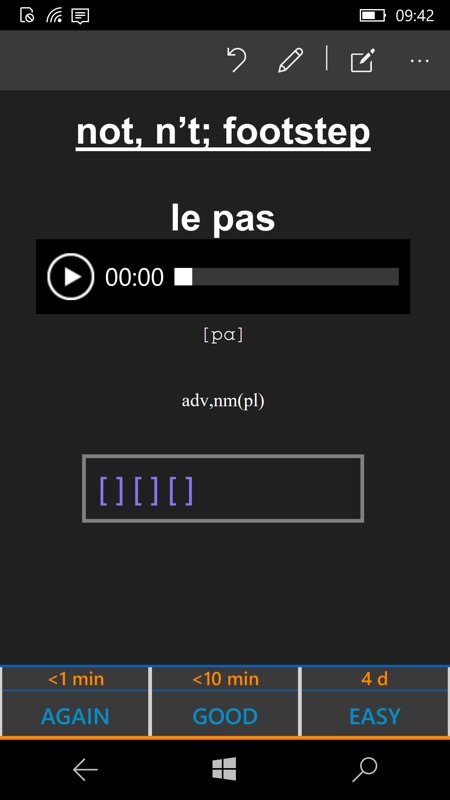 In dark/night mode now, showing my 'home' page, with three decks imported (the last split into two, to match going 'both ways'); (right) testing whether I know the French for 'footstep' (I didn't!), note the embedded media, tap to play the correct pronunciation.

Anki Universal is a terrific example of a UWP application for Windows 10 - I'm not going to hold small incompatibilities with some deck media against it. From deck management to intelligent presentation to statistics to a UI which is utterly polished and works just as well on Mobile as under Desktop, this is something of a must have in the Windows app world.

It's free in the Store here. And you can bet I'm adding it to the AAWP UWP app directory!