In the spirit of throwing myself wholly into living the road warrior life, I tried out 24 hours with only Windows 10 Mobile - no cheats, no laptops, no Android backups. Just W10M for everything, on the Lumia 950 XL, for work, personal stuff, entertainment. As at mid-July 2017, who is the OS best suited for? My findings match Microsoft's own projections for the OS. I still don't agree with stopping making the 950 range, but the withdrawal from consumers in favour of business and enterprise is... probably for the best, if my experience is anything to go by.

Forcing myself to use only my Lumia and only Windows 10 Mobile (in this case, the latest Fast ring bug-fix build) for 24 hours is somewhat extreme, but it did show up numerous things which are still missing from the OS or ecosystem. With other devices to fall back on, it's easy for little omissions to be forgiven 'because you could do them elsewhere' - when it's just this OS and just this one device then if something is missing or broken then that task stays unfinished. 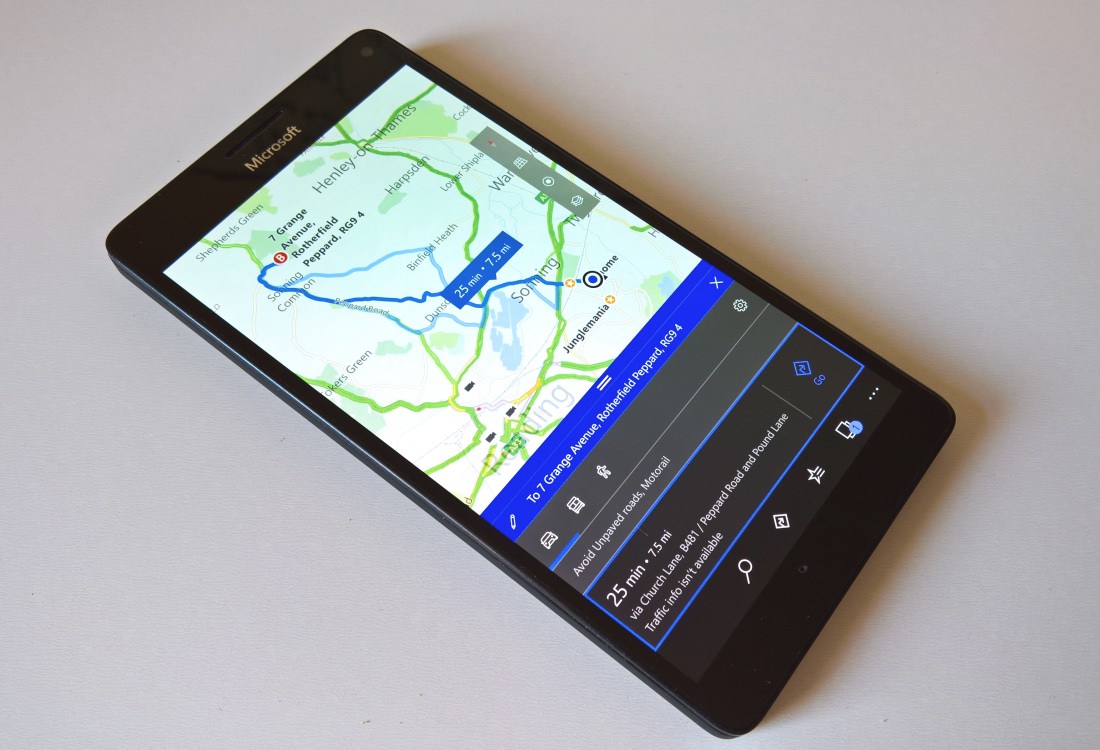 So, herewith an illustrated guide to some of my frustrations with the latest Creators Update (RS2+?) builds of Windows 10 Mobile on the 950 XL, garnered over 24 hours on the road (visiting relatives, trying to get work things done too, trying to stay social, capture moments, etc.)

But before I start moaning, let's throw out some bouquets ahead of the brickbats.

90% of what I needed to do over the whole 24 hours was perfectly possible on the phone. Heck, at least half of this feature was written in Word on the Lumia 950 XL, armed with my trusty slimline Inateck Bluetooth keyboard (sadly no longer available?). Email was dealt with quickly and easily in Outlook (two mailboxes), with attachments, my Slack workgroups worked fine in the Slack UWP beta, PDFs were downloaded and browsed, News feeds were checked and noted using FeedLab UWP, OneDrive was used extensively to hold shared media and documents, you get the idea.

The fact that most applications were identical to those on my Surface Pro, also running Windows 10, of course, made the whole 'road warrior' experience seamless and there really was little to complain about. From live tiles to Settings to applications, Windows 10 Mobile really just is part of the wider W10 system and benefits from it.

In fact, the only glitch I experienced in this business/productivity mode while on the road was that the AAWP to-do lists are kept in Asana, a cross-platform task and project management soludion, and guess what? Despite being 'cross-platform', there's no version for Windows 10, with users expected to use Asana via the Edge browser. Which works, but only after you've got round the usual Google account authentication - Asana still has issues here when accessed on a Windows 10 Mobile phone, it seems. You have to go via 'desktop' mode and use a standalone Asana account, which is something of a hassle. 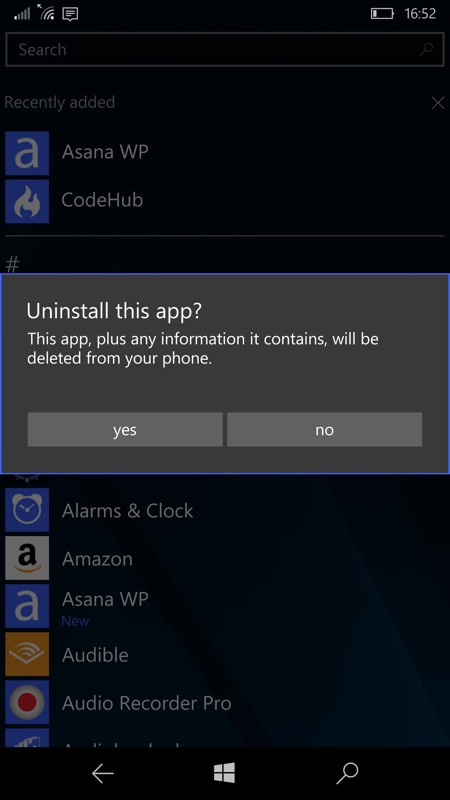 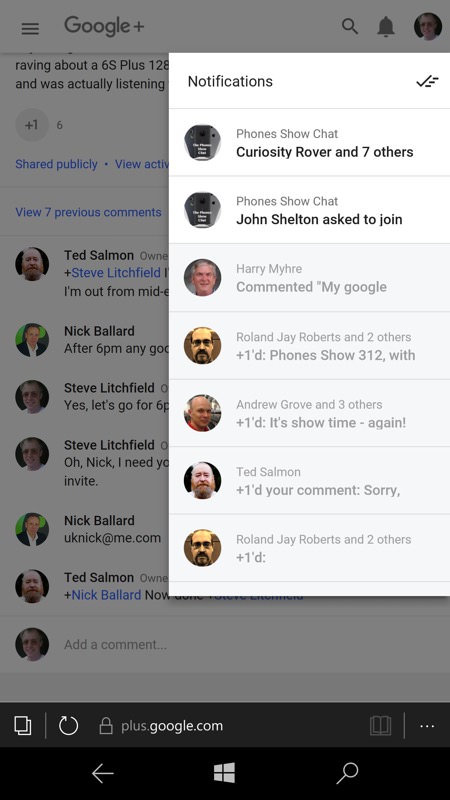 Oh, and Google+ provides many notifications of interest in my writing work, with tips on new software or comments on my various shows. Edge on Windows 10 Mobile provides a workable environment for Google+ (above right), but it's not exactly super smooth or speedy. Again, a first party, dedicated application would have helped a lot.

So far so good though, with things going swimmingly enough that you wonder why more people don't use or recommend the OS.

And then I started going beyond work and trying to do things to do with the rest of my life - navigating/travelling, online banking, watching streaming media, and this is where Windows 10 Mobile started to let me down. Here, in approximate chronological order, are some of the notable points during my day with only Windows 10 Mobile, where I increasingly felt let down and annoyed by the lack of attention to (largely) consumer-focussed apps and services.

Starting with a success story - Groove (by Microsoft, below left, for general music) and its imitator, Grover Pro (below right, for podcasts) - both worked faultlessly and looked fabulous too. If music and 'casts are your main media consumption then Windows 10 Mobile actually does very well indeed: 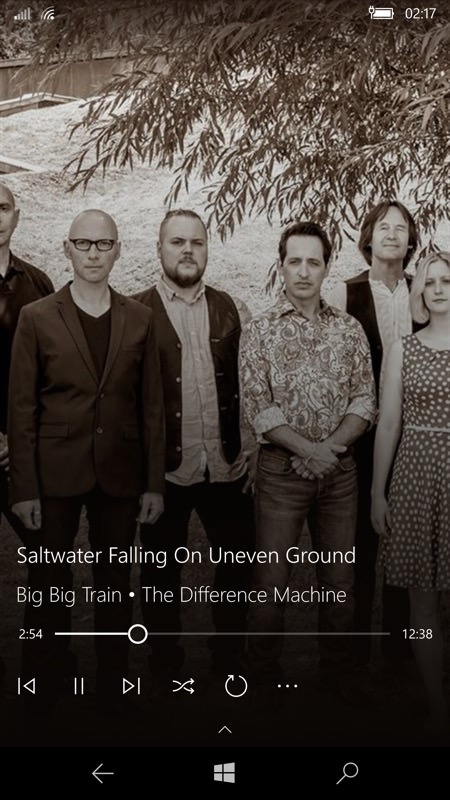 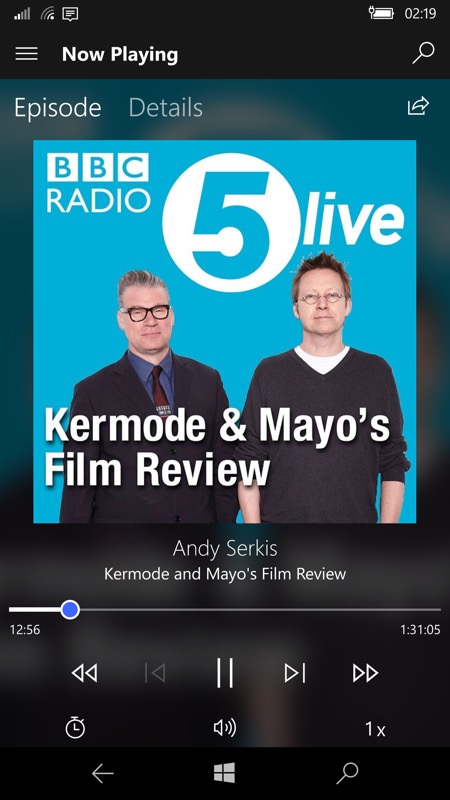 But then we're into real world gripes. Starting with the auto-brightness system - this works perfectly 99% of the time, from sunshine to dark alleys at night. However, it can't cope with watching media (in my case, Netflix) in the dark, sitting up in bed. The brightness needed for video playback is very different from the brightness needed for, say, a web browser in a dark bedroom. Maybe I'm expecting too much? The workaround is to manually take control in Settings, as shown below left, but it's not ideal.

My other main source of online entertainment is Amazon Prime Video (below right) and here again Windows 10 Mobile comes a cropper because there's no first party (i.e. Amazon) client for this service. So there's literally no way to view any of Amazon's Prime Video content (below right) on the phone here: 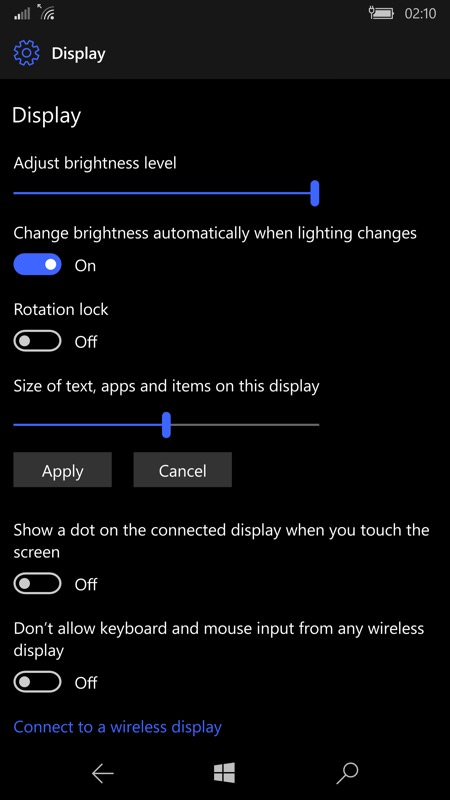 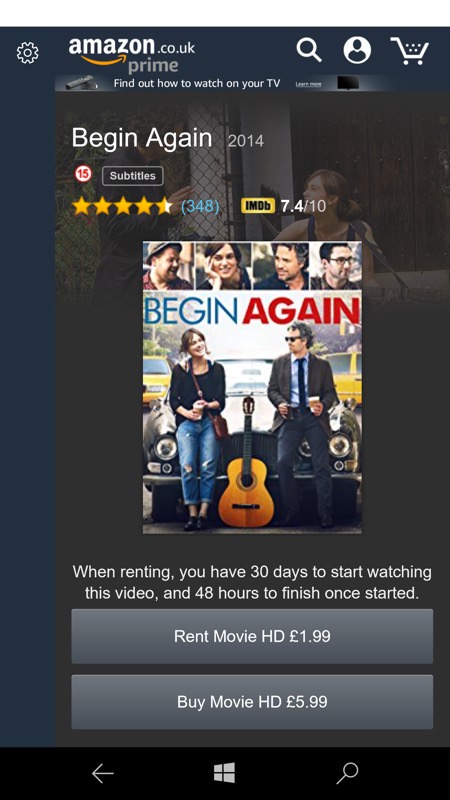 Also on the Amazon front, notice the application view above right - it's simply a wrapper for the web site surrounded by blank space on top and left - and very basic. It's as if Amazon gave one of their trainees the job of coding this up in a lunch hour and there has been zero effort put in by the big 'A', which is a shame. It's not just lack of Prime Video, it's lack of any polish whatsoever. Harumph.

Onto another personal and popular area of smartphone functionality: navigation. Adding a smartphone in a holder to a car to give it full real time sat-nav seems like the obvious thing to do - no having to pay car companies a fortune each year for dashboard map updates - you get up to date maps automatically and live traffic re-routing.

Except that you don't, in this case. It seems that traffic routing has been broken since the Creators Update hit, a few months ago, in that there's always the message (in my tests) 'Traffic Info isn't available' (screenshot below, left). It's bad enough that the traffic data in Windows 10 Maps is quite 'coarse' in its coverage (compared to Google Maps on Android, hence my dalliance with Waze), but to not be available at all when calculating a route is something of a new low. It's not just me, either, there are dozens of people feeding all this back in the Windows 10 Feedback hub (shown below, right). 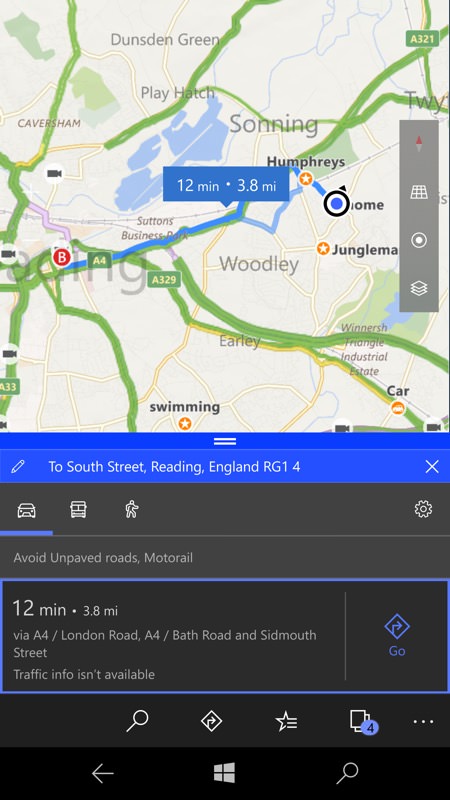 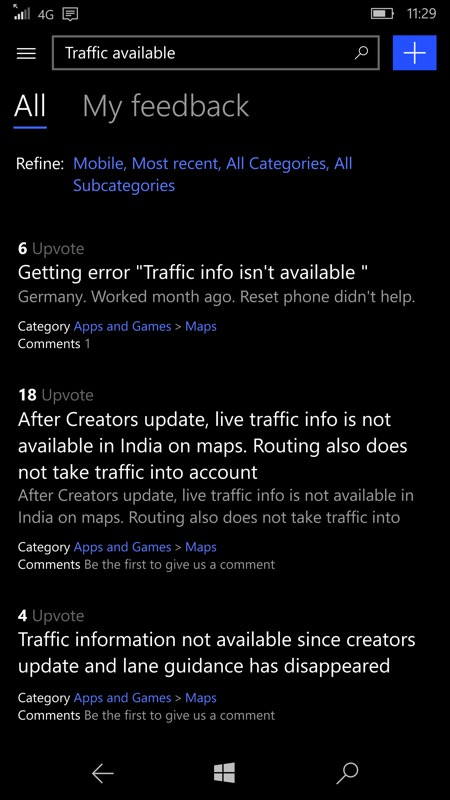 To lose traffic-aware routing on an always-connected smartphone is a big deal and this is something that's unforgiveable - it's all under Microsoft's control and must surely be simple to fix, if Microsoft is paying enough attention.

I was chilling with a movie on TV and wanted to know more about it. And I knew that Windows Phone had an official IMDB application, I reviewed it back in the day. It was a Silverlight app for Windows Phone 7 and it still worked under 8.1, but it's not there in the Store, so it seems to have been pulled. (Yes, I got it back via my Store trick, but the app didn't work perfectly anymore - which is probably why the IMDB folk pulled it!) Instead (below left) there were a bunch of not-that-relevant video apps and, if I dug further, a bunch of apps that claimed to be IMDB clients but which all actually just wrapped the pretty decent IMDB responsive mobile-friendly site. 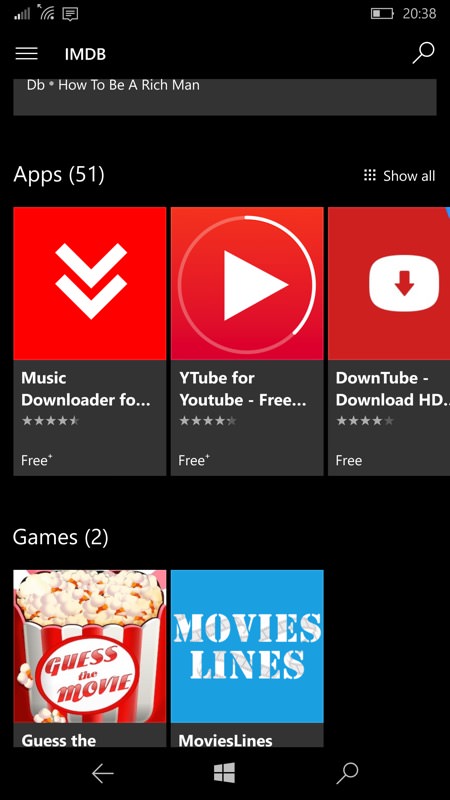 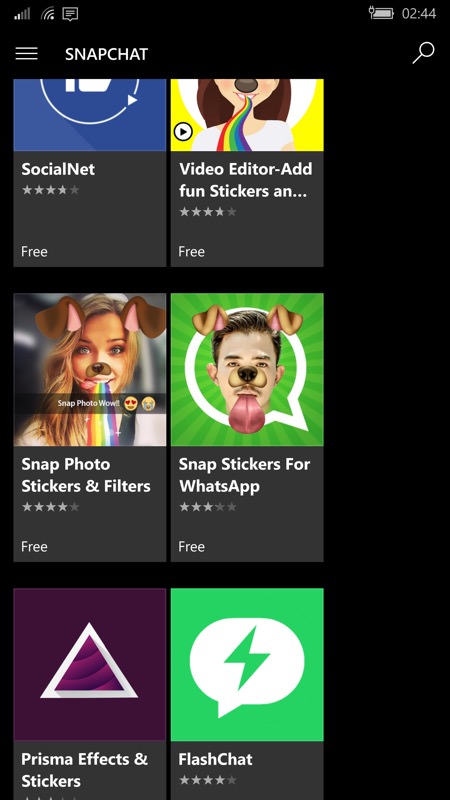 The screenshot above right (looking for Snapchat) tells the story across the board, for consumers at least. On iOS and Android smartphones, everything is available - think of any service or shop or industry and there will be an official application for it, sometimes not much more than a web-wrapper, but often an awful lot more. For Windows Phone the third party application situation for consumers was always sketchy - for Windows 10 Mobile the situation's worse again, with even some of those WP8.1 apps now withdrawn for various reasons and with fewer UWP applications for Windows 10 arriving to take their place.

And even then I could just about live with the existing application catalogue for Windows 10 Mobile, if it were curated properly, with great UWP applications allowed to surface and with the dross, the fakes, the misleading clones, the novelties all kept back or disallowed altogether. Instead, there are hundreds, even thousands of examples of 'cash in quick' fake applications and copies. My recent feature on Waze confused a number of people because there are several apps in the Store with that name - it's clear that app approval in the Store is fully automated, which is why the rubbish gets in. 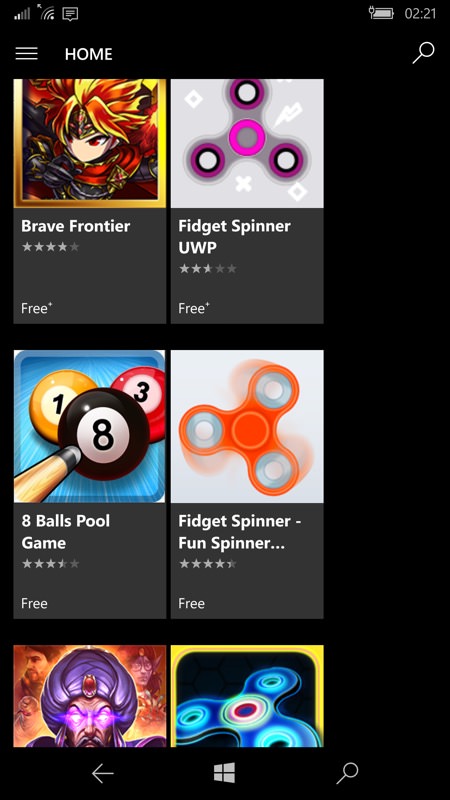 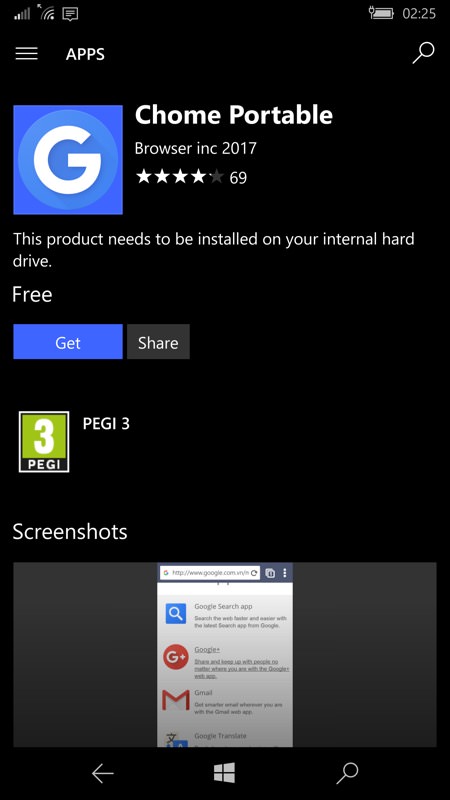 Just two of many possible Store views I could have shown: fidget spinner novelties and blatant misleading applications (Chrome on Windows 10 Mobile? - I think not! And note the spelling!)

Perhaps you think I'm exagerating the importance of a well maintained Store? Yes, the likes of you and I will know what to head for, what to download (assuming it's there in the first place), but there's so much that's fake that it's almost impossible for a potential 'consumer' to navigate their way through their set-up process.

[[See also the AAWP curated directories for general applications, for media/imaging apps, and for games...!]]

Skype's new UWP application is a shining example of a Windows 10 application done right though, surely? Not really - it's bloated and slow and even starting Skype UWP on a Lumia 950 XL (one of the fastest compatible devices) takes a good five seconds of looking at the blue Skype splash screen (below left) - it's simply not good enough, or at least optimised enough. 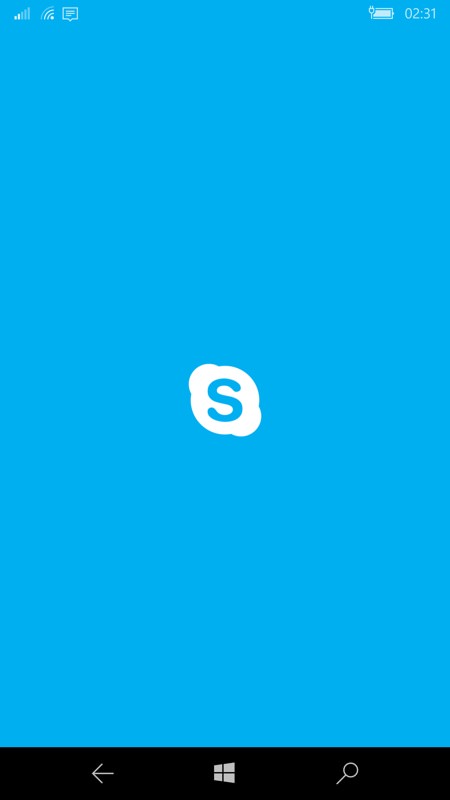 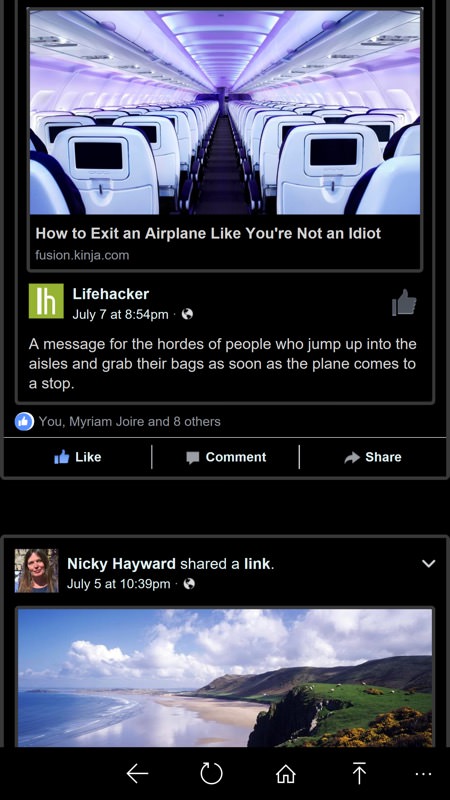 Talking of bloat, the prize has to go to Facebook's official client for Windows 10 (and its Messenger side-app), each of which are insanely large and slow - I recommend using SlimSocial (shown above, right) but even this is necessarily glitchy (as it scrapes the full Facebook site) and not exactly a smooth and polished experience for consumers. (And yes, Facebook is a monster app in terms of resources on other platforms too, but that doesn't make it right!)

It's not only consumer social applications that can be slow under Windows 10 Mobile - I have a favourite game in International Snooker Pro, so I know how it performs on other platforms... and it's a dog here, even on the fast Lumia 950 XL - the balls move at least 30% slower than they're supposed to, the commentary track has odd pauses between phrases, and so on. For a Snapdragon 810 phone it's all very disappointing - on my lowly Snapdragon 410-powered Android phone, the action is at full speed and without hiccup. 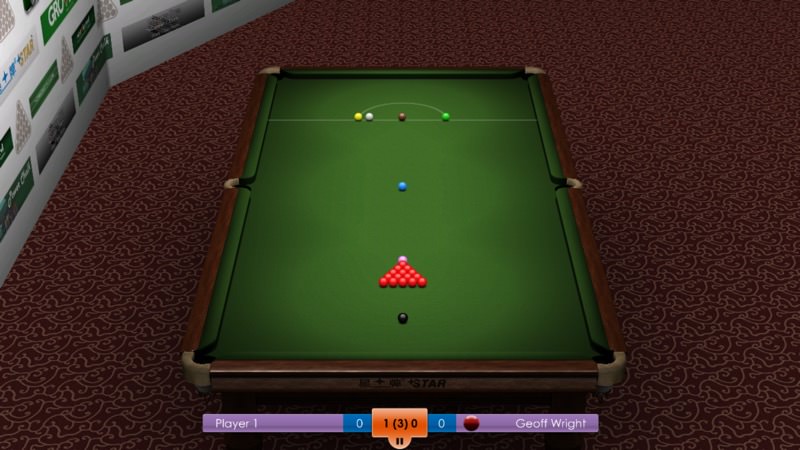 Which isn't to say that there aren't any good games for Windows 10 Mobile - of course there are. Hundreds of them. But not the tens of thousands that exist for iOS or Android and they don't always run at the same speed. Usually because the developers are porting over code written for other platforms and there's no real attempt at optimisation for Windows.

All in all, a frustrating day as a consumer, though a largely productive day as a professional. The difference between how well Windows 10 Mobile does in the two regimes is exactly in parallel with Microsoft's own stated ambitions for its first party Windows (running) phones. 'Retrenchment' from the world of consumer smartphones was probably inevitable, given how bad Windows 10 Mobile is at doing all the 'fun' stuff, yet I'm never really going to give Microsoft a pass for pulling out of the business world too, by virtue of stopping making phone hardware, given how good the OS is at the 'work' stuff.