Back in the midsts of time (2011) I reviewed International Snooker, giving it a rave write-up - but ever since have still been eyeing up the more modern 'Pro' version, effectively a re-write, over on Android and iOS. And now the new, full game is on Windows Phone and I'm expecting great things. Summary: I wasn't disappointed, though do see my caveat in bold below!

Writer's note: this game is heavy on processor requirements. I was playing it on the Lumia 930, which runs it at full speed. Ditto the 1520. But note that the older S4-based phones run the game at less than half speed, essentially unplayable, while the Snapdragon 400-based phones run it acceptably, but definitely 'slower than real life', and with some graphical stuttering.

The original International Snooker was a great simulation for its time, but felt a little lacking in subtleties and atmosphere. In contrast, the 'Pro' rewrite has been designed with everything you'd expect from the ground up: 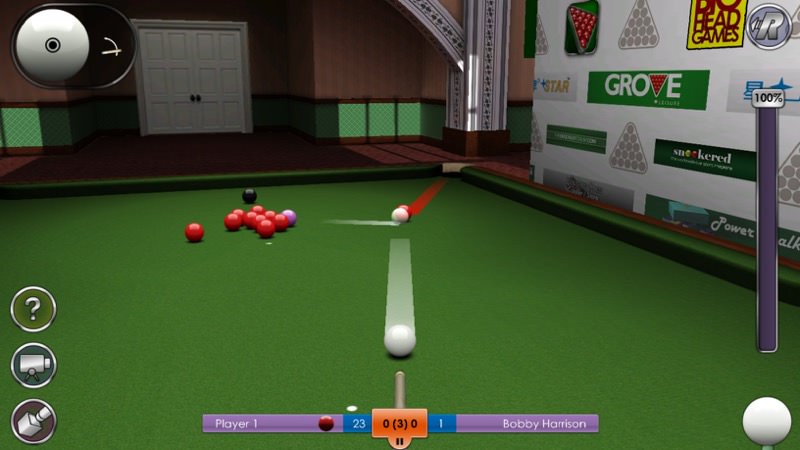 The first person view when you're at the table (there's also an overhead view), and yes, you can adjust the aiming lines if you want to make the game even harder!

All of this is in perfect step with the version of International Snooker Pro on Android, even down to matching the Android version's longstanding 'bug' whereby the screen time-out interrupts your opponent's breaks, forcing you to keep tapping the screen to keep the game alive. Provided your lockscreen timeout isn't too short though, this isn't a problem in most matches. 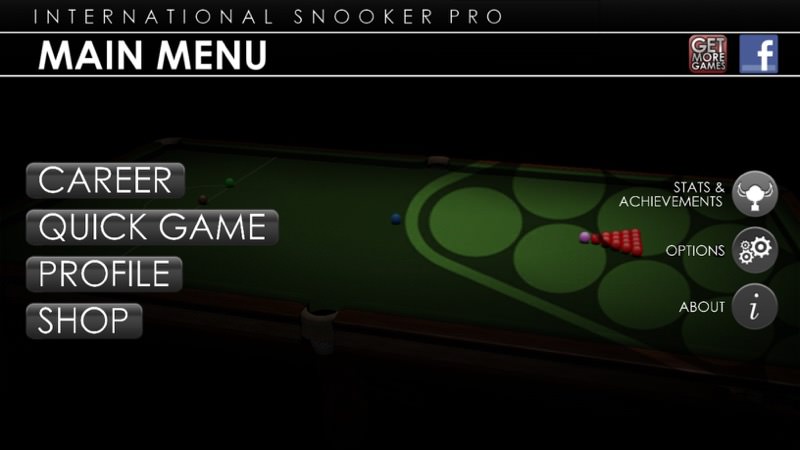 The main menu (you'll want to turn the loud music off in 'Options'!)

There's a trial version that allows three frames to give you a feel for the game and how it plays, plus a 'Quick Play' feature, but the meat of International Snooker Pro is in the 'Career' mode, in which you work through a virtual year, with each tournament letting you work through easy first rounds, and then your opponents getting ever better in terms of playing AI, until in the final of each event you're absolutely punished if you miss. 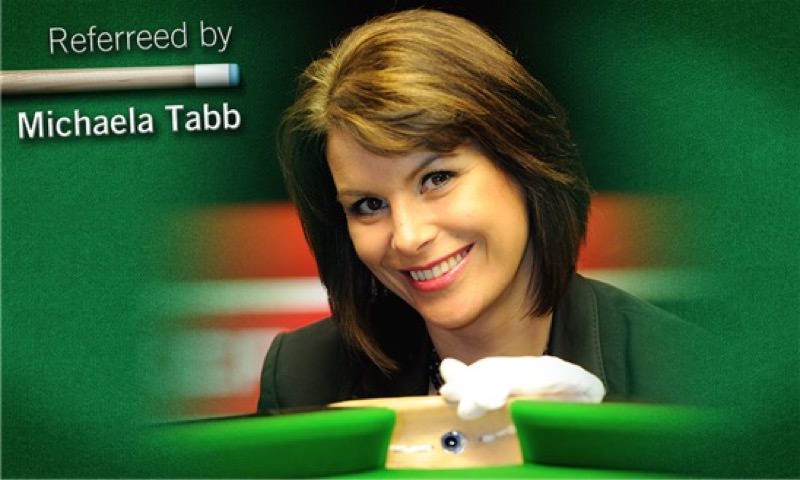 Ah yes, her. Have been listening to her score my snooker games now for almost two years!

It's perfectly pitched and utterly addictive. I've been playing this title for half an hour a day every day for the last two years on Android (I know, I know....) and still love it. The real world physics and the AI of the opponents mean that no two games are ever remotely the same and there's a real feel of trying to 'beat' the other guy. 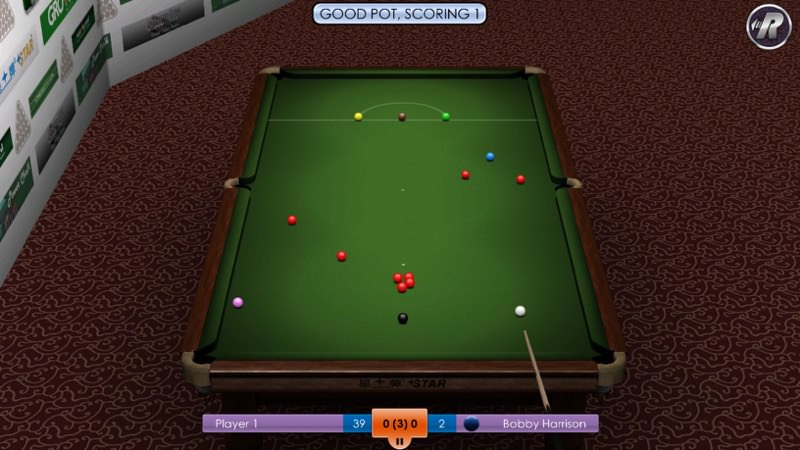 When your opponent is playing, the viewpoint starts in TV aspect and then cuts to a pocket view if needed...

If this all sounds a big gushing then I make no apologies. The timing of the visuals, with TV-style angles cutting in to show the ball and pocket action, the replays, the vocal scoring, the occasional applause from the audience (which is still generally muted, but hey....), all adds to an immersive game environment. 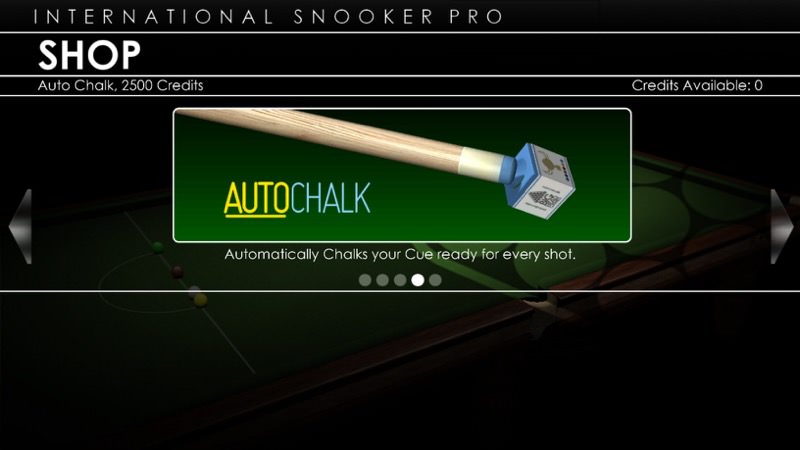 This is something that you can earn after a few weeks of playing, but it only lasts for a match or two, so don't rely on it!

Yes, it's true that I've now bought this title in each of its two incarnations on three mobile platforms and that's adding up to close to £15 over four years. That should tell you how good this game is. Shots that I'd attempt in the real world (a little back spin, 76% power should bring the cue ball back off two cushions, ready for the pink, etc.) come off exactly as real balls would on a real table and with real cushions. In fact, in the real world I'd fluff the cue stroke and miss, at least here the cue stroke is the one thing that always comes off perfectly, provided you remember to chalk the cue! 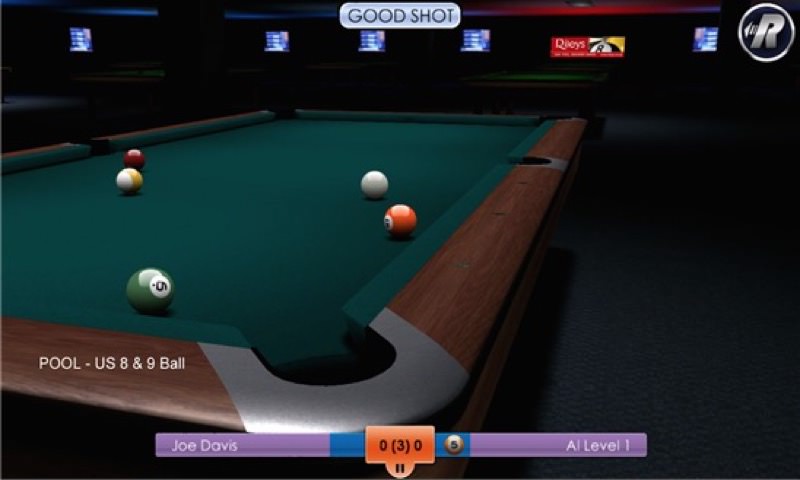 In 'Quick Play' mode, you also get access to a few pool rule variants and a smaller table. Think of this as a side-title to the main event though....

In terms of in-game winnings, you amass enough to buy a temporary 'auto-chalk' function, and to buy extra cues with more power, these are all nice-to-haves, but no more. The core of the game is the snooker itself and this is hard to fault.

Is International Snooker Pro perfect? Not quite. There's an interesting quirk whereby the AI of opponents can be a bit weak getting out of snookers, so if you're miles behind in a frame then it's almost worth hanging in and trying to win the frame on the 'three misses' rule - that's a million to one shot in the real world and a 10:1 shot here, at least if your snooker is fiendish enough! 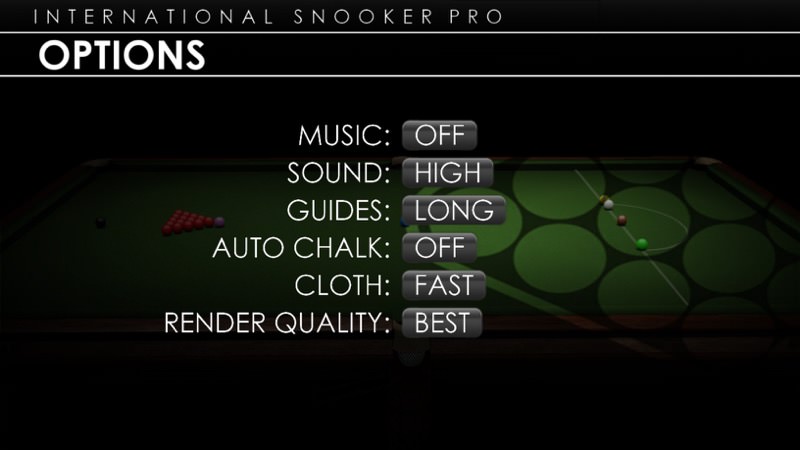 Plenty of options to help you tune the feel and difficulty to your own liking...

If you have any affinity for the green baize at all then make beeline for this title, it's the best snooker or pool game I've ever played. 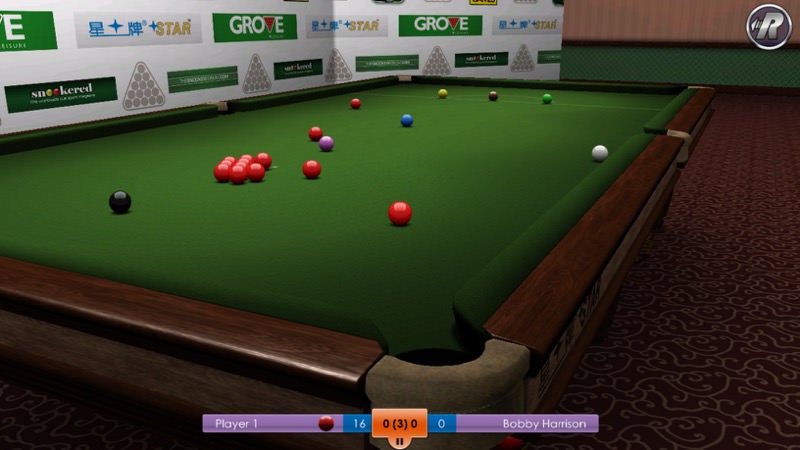