I've often contended that mobile app stores are stocked with content that, to be frank, could do with some quality control. Happily, there are also a few applications which ride high above the rest, with interface that's nigh-on perfect and oozing class - International Snooker is one such, for Windows Phone, offering a genuinely realistic environment, a terrific interface and gameplay that's pitched just right.

Pool and snooker games are perennial favourites on mobile platforms - I should know, having bought just about all of them over the years. And now we have the premier cueing title on Windows Phone, by the British developers Big Head Games. In fact, International Snooker is also available for the iPhone, for Android, even for the Mac, but don't worry for this isn't a half-hearted port to Windows Phone - Big Head has created this version from scratch and the result is very polished indeed. 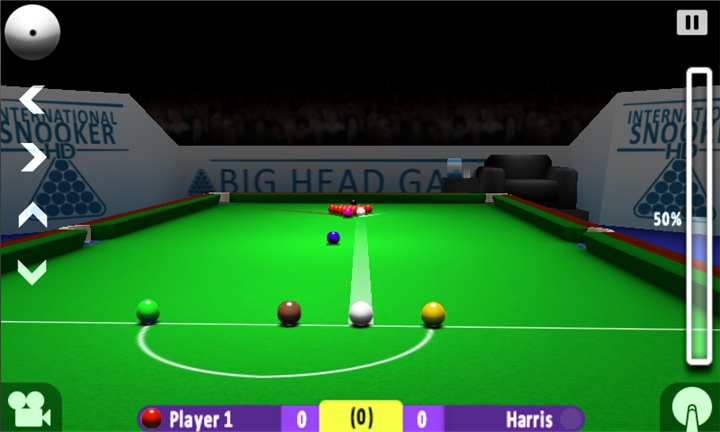 Based exclusively around a first person view of the table, you never actually get to see your own cue, but this isn't an issue - controls for spin and cueing angle are in the screen corners and it's relatively easy to get the cue ball to do your bidding. The power meter on the right of the screen is less intuitive than 'drawing the cue back' by touch, as featured on some other titles, but does have the advantage that you can set the power of a shot exactly (e.g. you learn by experience that nn% is what you need to play a thin safety and get the cue ball back to baulk. 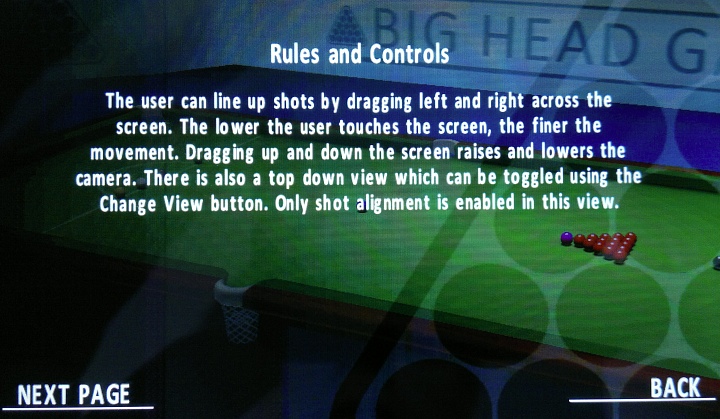 As shown in the Help screen above, shifting your aim involves swiping from side to side - rather cleverly, the vertical position of your swipe determines how far your view is rotated, making it possible to both sweep round the table and also make fine adjustments to tricky shots. Swiping up and down adjusts the camera angle (and position) in a TV-like motion that works well (e.g. to see a bunch of balls up ahead more clearly).

Now we come to the crux of the game - I'm assuming you're already familiar with the rules and goals of snooker (it's not a trivial game but also not hard to get the hang of) - aiming the cue ball correctly to make a pot. As you can see from the screenshot below, your cue ball's direction is 'projected' onto the 'object' (target) ball, such that you can see the exact contact it's going to make. Plus you get shaded vectors indicating that direction that both cue ball and object ball will take after the contact.

Here's video of all this in action:

Where other snooker and pool games get it wrong is in either not having any of these aids (so you're lining up shots and imagining roughly where the contact will be) or having too many aids (as in providing the exact line, all the way to the pocket, for the object ball). The former ends up being too frustrating, especially on a small phone screen, while the latter makes the game too easy - after all, you can keep fiddling with your aim until the 'line' intersects the pocket and then shoot - and pot the ball every time.

International Snooker gets shot aiming absolutely right - there's the indication of roughly what's going to happen, to help aiming on a small screen, without the handholding going as far as ensuring that you'll make every pot.

I also liked the way the probably next object ball is already targetted when you start each shot, saving all that tiresome panning around to try and find it (as often seen in other games of this type). Well done, developers! 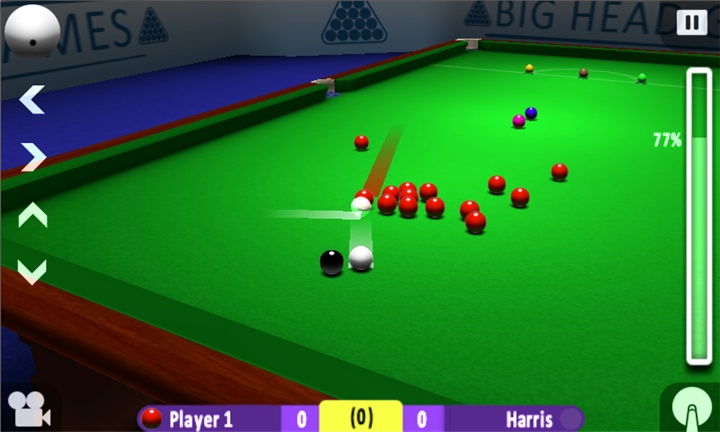 The physics of International Snooker is pretty good too - the mark of a good cue game is that you can achieve positioning shots that you'd make in the real world (e.g. "play with top spin and running side so that the cue ball follows the object ball off two cushions, ready for the next shot") and, lack of feel in the power bar notwithstanding, this is largely true here. It's very satisfying to make a pot and positional shot (the view switches quickly after striking the cue ball to a TV-style 'whole table' view), sitting back and imagining watching that being made in the World Championship by a top player.

Also available is an overhead view (toggled from the bottom-left corner icon) showing the whole table from directly above - this is good for getting your bearings as to which angle you've just been viewing it from, for planning shots, and so on, and is essential in any cue game.

Not that International Snooker is perfect. The balls don't seem to roll quite far enough for a given velocity, the audience applause sound effects are erratic (so wild clapping for something average and then dead silence for a brilliant positional shot), plus audience 'oohs' can precede an in-off by a good couple of seconds (i.e. because the game has already calculated the ball trajectory and erroneously fires off the sound sample too early).

In addition, the pick-up after being interrupted in the Windows Phone Mango psuedo-multitasking system isn't perfect - there's a wait of a good four seconds while the game tries to resume and even then your aim on the current object ball isn't remembered. I'm sure this can be improved by the developer.

But I'm being picky, I love this game and it has made the Windows Phone platform for me.

There's a surprisingly playable 'trial' version, which lets you a fair way through the game (and then a little more each day after that) so you really can get into the title before committing yourself to purchase. Yet again, perfectly pitched by the developer, Big Head Games. 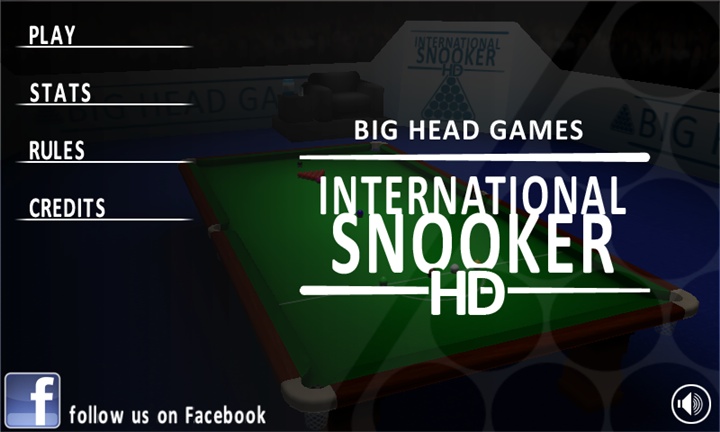 If you're anything like me, you've bought a Windows Phone smartphone and are looking for the ultimate cue game - this is it. At least, it is if you're happy with Snooker, rather than pool. As a Brit(!), I'm over the moon, but Americans especially will be looking for a pool variant - for which Big Head Games only currently offer the very different 'Doodle Pool' - watch out for something more serious and realistic in the near future?

Try the trial then buy it, it'll be one of the best three quid you ever spent.