HTC today announced the 8S, one of its two new Windows Phone 8 handsets, both fo which feature enhanced audio capability provided by Beats Audio. The 8S is the budget model of the pair, offering a 4 inch 800x480 Super LCD Gorilla Glass display. As expected in Windows Phone 8 devices, the 8S also has a dual-core Qualcomm S4 1GHz CPU. Memory is limited at 512MB of RAM and 4GB of mass storage. The latter can be expanded via the 8S' MicroSD card slot. The 8S has a distinctive design that will be recognisable by virtue of its various two-tone colour schemes.

The 8S follows similar design lines as the 8X, including camera and speaker placement. However, it is distinct from its 'big brother' by means of a two-tone colour accent. The 8S comes in three designs, "Domino" which is black with a white accent; "High-Rise Grey", which is light grey with a yellow accent; and "Atlantic Blue", which looks like Navy Blue with a lighter blue accent. 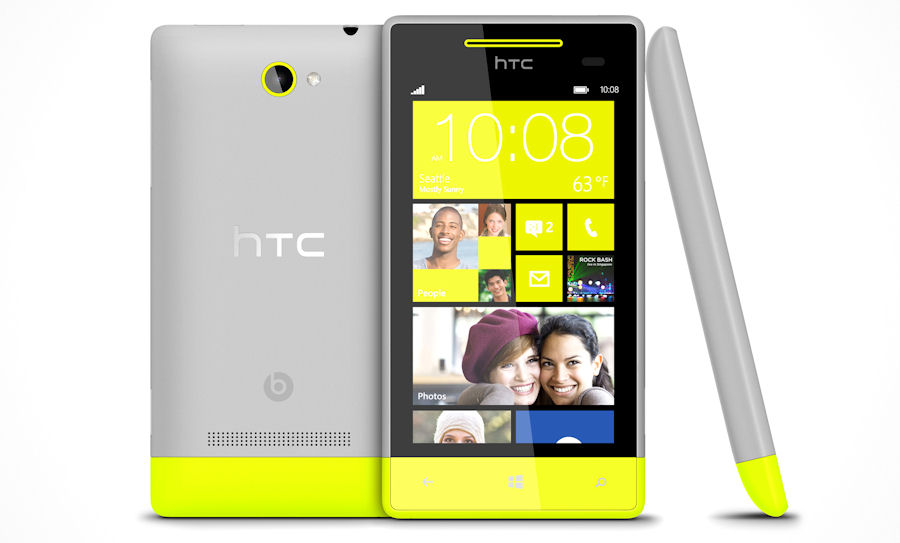 As with the 8X, the 8S features a non-replaceable battery, although capacity is slightly less at 1,700mAh. Nonetheless, it's reassuring to see that the average size of smartphone batteries appears to be heading upwards.

The HTC 8S takes advantages of the new hardware support found in Windows Phone 8 by having a Qualcomm Snapdragon 1GHz dual core processor. The clock speed is on the low side compared to Nokia's mid-range offering, the Lumia 820, but will no-doubt be adequate to the task. The 8S also offers a MicrosSD card slot for expanding the relatively limited 4GB of built-in mass storage.

The 8S also uses the Micro SIM standard. Therefore, contract customers upgrading to this handset will probably be issued a new SIM. However, customers buying the unlocked version may need to cut their old SIM card to fit.

HTC state that the 8S will be "available in 52 countries beginning in November with more than 146 mobile operators".