Build apps in the browser with Windows Phone App Studio

Microsoft has released a beta of a new tool, Windows Phone App Studio, that lets you build basic Windows Phone apps in your browser for free. It is envisioned as a way for first time developers to get started with app creation without having to know any code, but may also be useful for more experienced developers as a prototyping tool.

The free online service allows you to create an app using one of several pre-defined templates (our company, catalog, celebrate, menu, movie review, my family, my favourite band, my hobby, my trip official store, personal trainer, sports team ans storyteller), or by starting from a blank canvas.

Finished apps can be side loaded on to a device, shared with friends by email, an imported into Visual Studio for additional customisation. At a later date it will also be possible to publish finished apps into the Windows Phone Store.

The process starts by giving your prospective app a name, description, and icon. After this the content can be added to the app in the form of sections (page) and menus (link to sections and web pages). Sections can draw content from a number of different data sources: collection (custom database with optional cloud storage), HTML 5, RSS, and YouTube, allowing for a fair amount of flexibility, especially for information-centric apps. Each section can consist of multiple pages (e.g. an RSS feed will have an index page, and sub-pages for each item in the feed).

The information included in each section can be customised by choosing which parts of the data source are utilised (e.g. which fields of a database to use), with some variation between data source types (e.g. collections allow for dynamic data). The layout of a section can be customised by choosing a template (e.g. icon + large text, or title + small text). Many of these layouts will be familiar to regular users of Windows Phone as those used in the platform's built in apps. 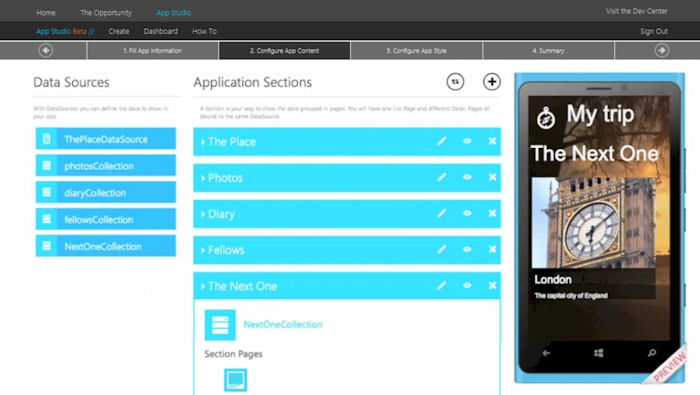 Once you've added the key menu and sections (content) to the prospective app you can customise the overall look and style (accent colour, background image, foreground brush, app bar brush) and define a splash and lock screen for the app. There are a pre-selected range of colours and images available, but it possible to create your own colour and upload your own images. 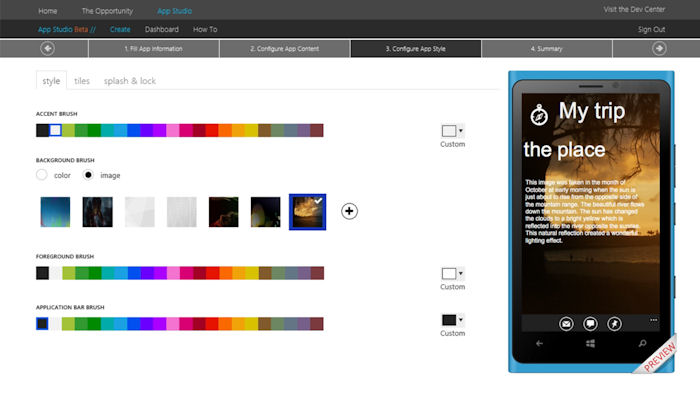 It is also possible to create and customise a Live Tile for the prospective app, with template for the three key type of Live Tile available (cycle, flip and iconic). It's impressive to see this kind of attention to detail in a web-based app builder, but do note that none of the Live Tile are truly dynamic, so their usefulness is somewhat limited. 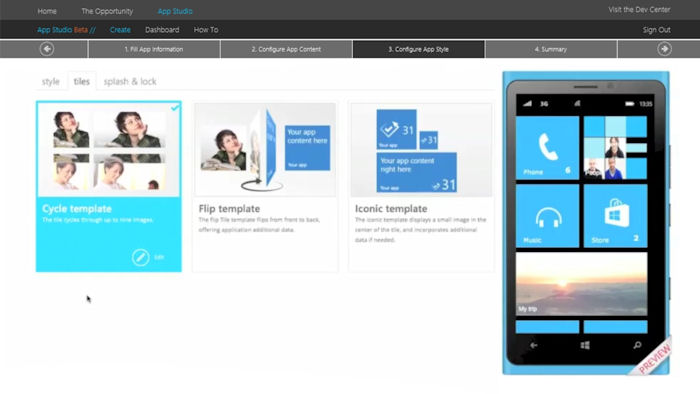 Once you've finished adding content and customising the look and feel of the app there's a final review screen that lists the resources within your prospective app, offers an option of making your app public, and gives access to the "Generate" link that will build the final version of your app. The app creation stage may take a few minutes, but you'll be emailed once the process is complete. 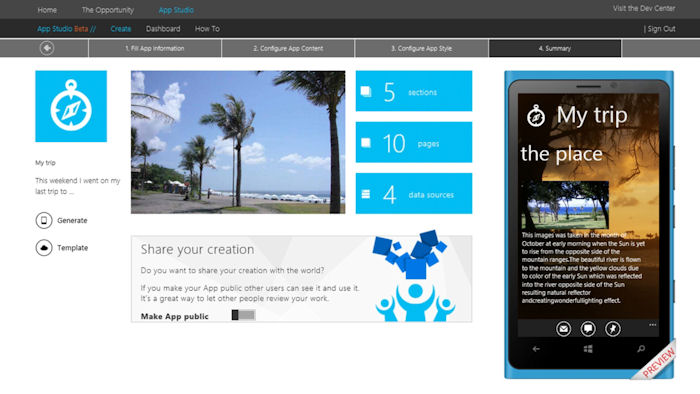 Once the app has been generated you can test it on your own phone via side loading (thanks to the new starter-level developer unlocking service). It is not currently possible to publish to the Windows Phone Store directly from the new tool, but this option will become available in a later release of the tool (presumably later in the beta process). It is also possible to export the source code from the online tool and import it into Visual Studio should you wish to further customise the created app. 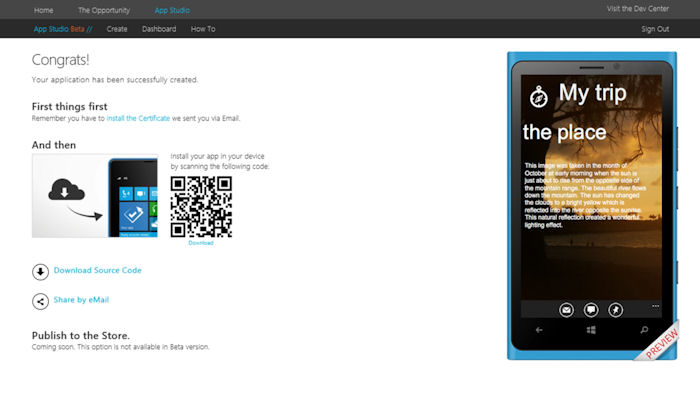 Windows Phone App Studio is a powerful tool, going beyond the capabilities of most web-based app builders. That's partly because it is tuned specifically to Windows Phone, but the flexibility of the data sources content system (especially collections) is a real highlight too. Apps created using the tool have the potential to be genuinely useful, although equally there's potential to create poor apps.

Put in a few hours work and it should be possible to create a decent app, although we would recommend thinking about the content you want to include ahead of time. Apps created by the tool can be shared with the world, but in many ways the possibility of individuals creating apps for their own usage (e.g. family photo collection) is more intriguing.

While Windows Phone App Studio's lowering of barriers to the creation apps (completely code free) is not going to see a sudden flowering of apps, it does make the ecosystem smell a little sweeter, and is a genuinely useful addition to the Windows Phone's developer toolkit.