Kantar Worldpanel data, released today, shows that, in the three months to the end of July 2013, Windows Phone devices made up 8.3% of smartphone sales unit volumes in the EU5 (Germany, UK, France, Italy, and Spain), the highest ever level for the platform. Windows Phone also reached a record share of smartphone sales in Mexico (12%), taking second place behind Android, but ahead of BlackBerry and iOS, the first time this has happened in a market of significant size.

In the news story for the last set of Kantar data we said that there was some evidence that the growth of Windows Phone sales was slowing down in Europe, noting that the increase in sales unit share in the EU5 for Windows Phone was 0.9% in the first quarter versus 0.4% in the second quarter. However, that no longer appears to be the case, with the increase (1.ma3%) in market share between the June data (6.9%) and July data (8.2%) being the same as the previous six months combined, something that points towards strong sales of Windows Phone devices in July.

However, sales in the US were relatively poor at 3.5% market share compared to earlier in the year, although the figure remain ahead of the same period last year. Windows Phone's figures in the US should see some improvement in the next few months, with the launch of the Lumia 928 and 1020, together with wider availability for the Lumia 520 and 925, likely to have a noticeably positive impact. Sales in China were also weak dropping to 2.4%  sales share  from 4.6% the previous year, suggesting Windows Phone is failing to find traction in the Chinese market.

Windows Phone is still a relatively small player compared to iOS and Android (17.9%, 69.1% and 8.2% in the EU5 respectively), but Windows Phone is very firmly in third place, with three time more sales in the EU5 that its nearest rival (BlackBerry). Also noteworthy is the fact that Windows Phone now has a similar market share in the UK to that of Symbian in February 2011, the time at which Nokia announced its transition to Windows Phone.

Other notable trends and data points in this month's Kantar report include a stabilisation of Windows Phone sales in Italy (level after six months of month-on-month decreases), improved sales in Germany (higher than the Windows Mobile dominated 2010-11 period), and Windows Phone's share of sales volume in Australia moving well past the 5% mark.

The growth of Windows Phone sales has been primarily driven by lower cost devices, such as the Lumia 520. Looking ahead, it will be interesting to see whether the introduction of devices like the Lumia 925, 928 and 1020 have a notable impact, something which would be desirable for Microsoft and its partners, if Windows Phone is too avoid being attached to a "best for cheap devices" label. 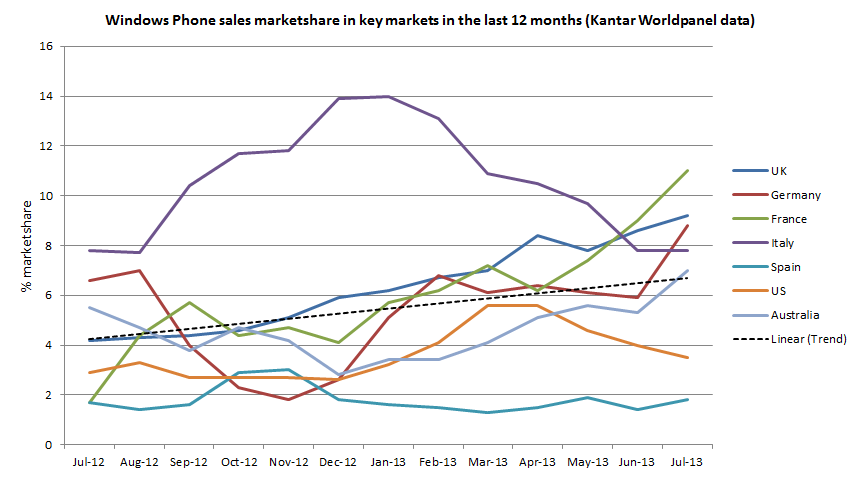 In its press release, Kantar says that Windows Phone notes that much of Windows Phone's recent growth has been driven by mid tier device, such as the Lumia 520, and by converting featurephone users to smartphone users:

Windows Phone’s growth isn’t coming from stealing Apple or Android consumers. Only 27% of Apple and Android users change their OS when they replace their handset, and those that do switch tend to move between the two big operating systems.

Windows Phone’s success has been in convincing first time smartphone buyers to choose one of its devices with 42% of sales over the past year coming from existing featurephone owners. This is a much higher proportion than Android and iOS. The Lumia 520 is hitting a sweet spot, offering the price and quality that new smartphone buyers are looking for.

Featurephone owners present a huge opportunity, representing more than half of all mobile users globally and this will be the new battleground over the next year. With the iPhone 4 and lower end or older Samsung Galaxy models selling well among first time smartphone owners, there is plenty of competition for these customers. The brands that win in the segment will be those that understand and address the needs of consumers in terms of price, content, and quality."

Windows Phone is enjoying success, but it is on a relatively small scale. However, this is inevitable as it faces a very competitive environment, with a long term slow build the only likely scenario as Microsoft and its hardware partner seeks to build market share. This scale difference is, perhaps, best illustrated in the charts below, which show Kantar Worldpanel data, from the last 22 months, for both the UK and France.